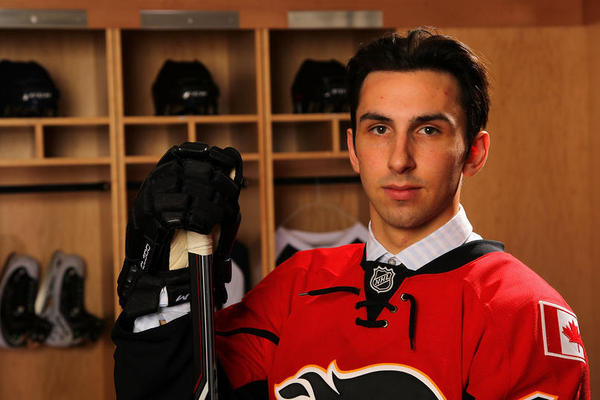 2013’s second first rounder (22nd overall) comes in at 5th in his first appearance on the Flames Fifteen.

Okay, so the speed – Poirier is a little odd in that when I’ve seen him play his stride looks very inefficient. It’s pretty counter-intuitive, but often if a player has to continually move his feet quickly to maintain speed, he’s not actually doing a good job of propelling himself forward. There’s a lot of possible reasons why someone might do this (too much side-to-side motion, not enough knee bend, skating too bent over), but there’s really only one possible result: the player isn’t generating enough push from the ice on a stride-to-stride basis in a way that will allow them to maintain top speed efficiently.

This means the amount of energy he puts into the action isn’t worth the amount of energy he’s getting out; think about how a car’s pistons generally rotate 2000 times per minute on the highway. Even though you were redlining it while merging (yeah, I know you, FlamesNation reader), you’re still going at the same speed now, at considerably less RPMs. Every time a skate hits the ice during acceleration, that should be a shift in gear (substitute something like momentum for mechanics). Often, when you think of the best skaters in the league, guys like Hall, Duchene, Bouwmeester, Crosby and Sharp are near the tops of the list. These guys take three to five gear changes when starting and then they maintain top speed. Poirier seems like he never gets out of the first gear.

This wasted, inefficient movement becomes an issue later in games, when the amount of energy you have to draw upon is dwindling: players who are inefficient with their movement are not going to be able to play as many minutes effectively because of the wasted energy when compared to their more efficient teammates and opponents (assuming most NHLers are of the same sort of fitness level).

Okay, now that I’ve written all of that out – here’s why I don’t think it’s going to matter.

Most players who have to resort to the “first gear” skating aren’t able to get to the top speed that Poirier does, and as a result, have to “overskate” in order to reach a puck first. Poirier does that, but in like half of the time. Because of that, he’s overextending himself less over a period of time as he arrives to points a, b, c and d faster. I don’t know how that’s going to rate when he starts to lose his speed, but for the next decade and a bit let’s hope it’s enough to make him a first liner. I think it is, but it’s hard to tell when you’ve only seen him against QMJHL players.

Good thing that his scoring pace more than makes up for any worries I may have down the road. Poirier scored at a really good pace and had a monstrous EV/PP split in his draft year – we liked the pick right away. All he did this year was jump his NHLE 7 points (27 to 34), increase the amount of shots per game he generated (2.9, already good, to 3.4, which is very good) and play in all situations for Gatineau, tallying 8 shorties this year.

Poirier basically improved all of his splits except for the EV/PP one, but 75% isn’t exactly quibble-worthy. His SH% might seem a little high, but it increased by about the same amount each of his three years and he was producing more shots year-to-year so I think that’s more his skill outpacing the QMJHL-level goalies. The astute reader will notice that he and Kilmchuk’s SA% and TS% were identical (Poirier was superior in total NHLE and PP/EV).

Of course, the biggest downer is that Poirier is currently injured: he had shoulder surgery a week and a bit ago and is probably going to be out until late November. His contract will probably be assigned to Adirondack as a result of this: but the good news (for the organization) is that it’ll continue to slide if he’s on the AHL roster. I don’t think it’s a huge deal going forward, as he’ll be given the proper amount of time to heal and he played with the injury all season, according to Burke.

I think the offensive prowess Poirier has shown in his time in the QMJHL is the primary reason he’s ranked here, and he’s scoring in a way that I think is relatively sustainable in the long run. If he really is as fast as he seems he is, I have no problem with projecting him as a potential first-liner down the road.