If read Pat Steinberg’s piece on Jiri Hudler’s decline last week – and if you didn’t, here’s a link, get to it – you might have had the same question come to mind that I did: “Hey, why is Jiri Hudler’s shooting percentage so much lower than last year?”

The obvious answers are: (a) he got a whole lot worse at shooting or (b) he’s taking worse shots than he was last year. I had some time on my hands, so I did some digging. The short answer is that it’s a bit of both, and a great deal of it comes from the fact that Hudler has become a perimeter player almost overnight. (Or at least over the summer.)

For the visual learners in the audience, I have a few nifty charts for you.

First, from our friends at Sporting Charts, the heat charts for Hudler’s even-strength shooting this season and last season. Redder and yellower means he shot from there more frequently.

As you can see, he’s barely getting into the slot to shoot this season.

And for giggles, here’s something similar from our friends at War-On-Ice. Rather than looking at his own frequency, this is a look at how often Hudler shoots from the various areas of the ice relative to the league average. 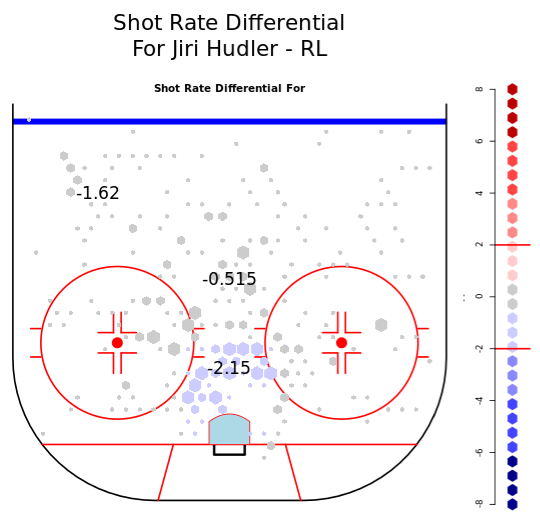 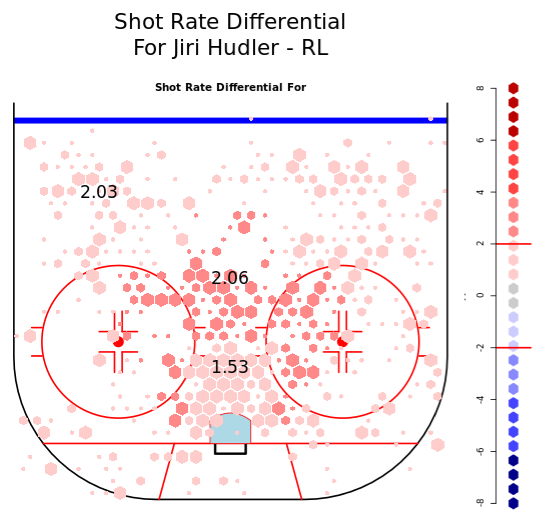 What do these charts tell us? Hudler’s shooting less often from every area of the ice relative to the league than he was last year, but there’s a notable massive correction in how often he shoots from the slot.

And all the charts taken together say that he’s shooting less often and when he does it’s from the lower-percentage parts of the ice. For comparison’s sake, he had 158 shots last season (2.02 per game) in all situations and this season he’s averaging 1.45 per game.

Before we dive in, some definitions.

So not only is he sticking far to the outside in terms of shots and scoring chances relative to the league, he’s doing so relative to the team, too, so any defenses of “Oh, but the whole team is a bit worse!” are flat-out wrong.