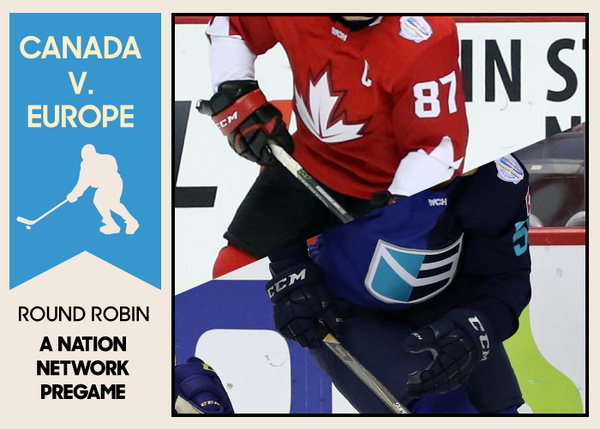 Canada and “Europe” are both bound for the playoff round of
the World Cup, but that doesn’t make this final game of the preliminary round
meaningless. The winner finishes the group segment with a perfect record; the
loser draws Sweden in the semifinal. It’s a game worth winning.

Canada has, unsurprisingly, dominated the tournament so far.
The favourite in every best-on-best international hockey tournament, the
Canadian entry is going so far as to rest Ryan Getzlaf and Shea Weber in this
contest.

Europe, on the other hand, has been a surprise. After a
lackluster exhibition performance, the Europeans shocked Team USA and beat the
Czechs, and now will test their mettle against the tournament’s acknowledged
superpower. Can Ralph Krueger and Leon Draisaitl get them the win?

Today’s game starts at 8 PM ET/5PM PT. It will air on
Sportsnet, TVA and ESPN 2.

The line of Toews, Couture and Perry has been playing what we typically think of as “third line” minutes for the Canadian side. Against the Americans, for example, they took on the primary matchup against Patrick Kane’s line and did it while starting three-quarters of their shifts in the defensive zone. That’s an awfully nice luxury to have, and if they seem to be spending more time in their own end of the rink than they should be that usage will be a big part of the reason why.

Europe beat the United States, but had to lean hard on Jaroslav Halak (2-0-0, 0.969 save percentage) to do it. The European side was out-shot 35-17 and out-Corsied 67-37. Krueger ran his top defence pairing of Chara/Sekera into the ground and although they weren’t scored on in that contest they were out-shot 13-2 and out-Corsied 22-4. For all the accolades this team has had, they shouldn’t win the possession battle against Canada.