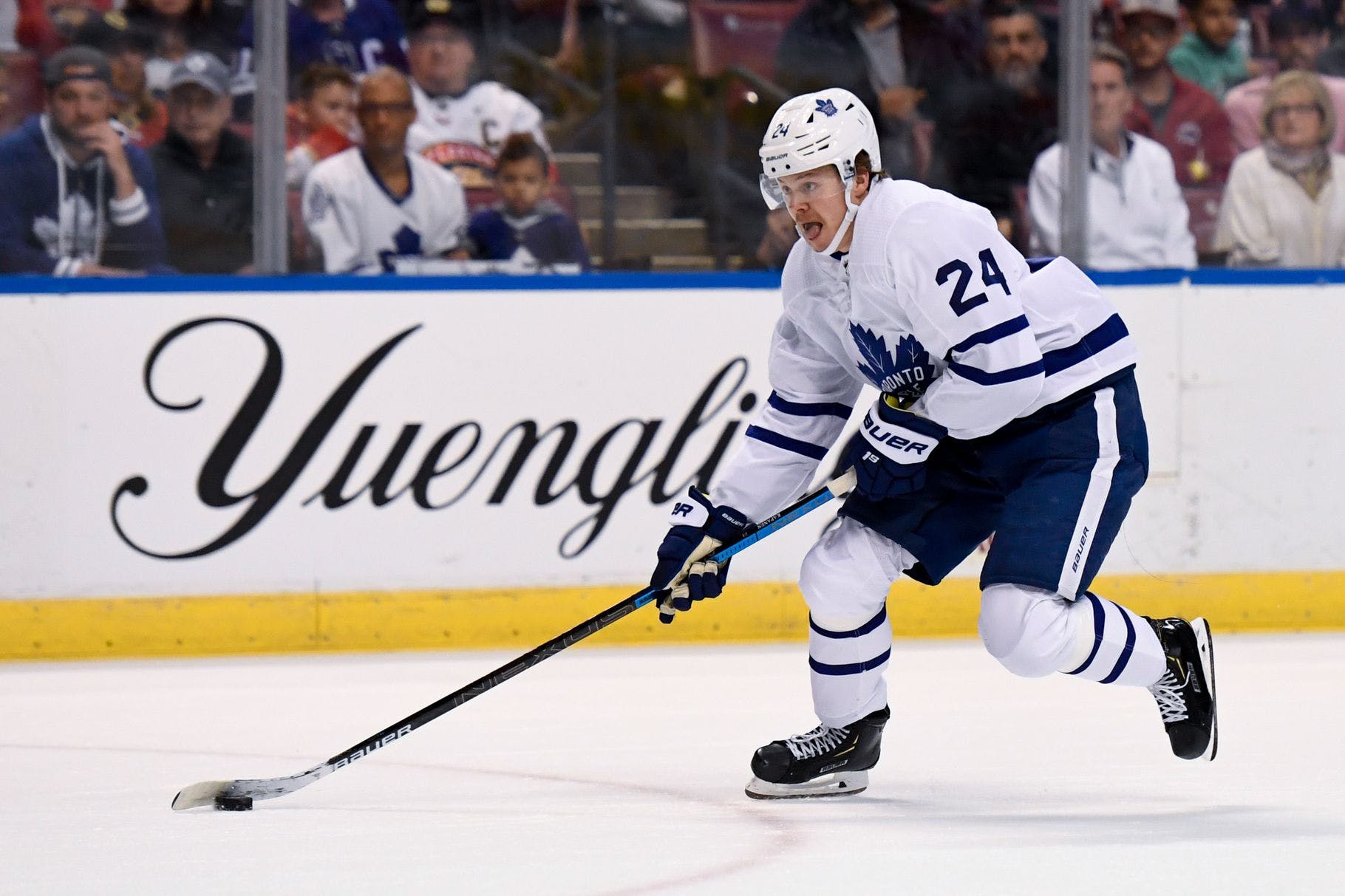 By Prajeya Parmar
2 years ago
With four days remaining until the 2020 NHL Trade Deadline, it’ll be interesting to see if Brad Treliving sways away from his usual summer splashes and makes a big trade mid-season instead. The following trade target is a way for the Calgary Flames to increase the longevity of their potential Cup window, as opposed to the typical “win now” deals that usually occur at the NHL Trade Deadline.

The next focus in Trade Targets series is Toronto Maple Leafs winger Kasperi Kapanen. Born in Kuopio, Finland, the 23-year-old played for KalPa of the Liiga prior to being drafted by the Pittsburgh Penguins 22nd overall back in 2014. The Finnish winger played four games in the Penguins organization before being traded to the Maple Leafs with Nick Spaling, Scott Harrington, Pittsburgh’s 1st round pick in 2016 NHL Draft and New Jersey’s 3rd round pick in exchange for Phil Kessel, Tyler Biggs, Tim Erixon (Calgary Flames first-round pick in 2009), and Pittsburgh’s 2nd round pick in 2016 NHL Draft.
As per PuckPedia, Kapanen is signed until the end of the 2021-22 season on a team-friendly cap hit of $3.2 million. As mentioned in previous articles, the Flames are likely to target players with term due to Treliving’s distaste in trading for rentals, making Kapanen an ideal candidate for a potential trade.

Advanced stats and past performance

On a star loaded Maple Leafs team, Kapanen is currently 7th in scoring with 11 goals and 32 points in 60 games. He would be tied with Mikael Backlund for 6th in scoring on the Flames, giving Geoff Ward’s staff another top-six forward who can play on either wing heading into the playoff race. Below are some advanced stats that Kapanen has posted so far in the 2019-20 season.
Kapanen’s advanced stats showcases his ability to drive play, an attribute that has been sorely missing among many of Calgary’s star players during the 2019-20 season. Furthermore, the Kuopio product’s speed and versatility would allow the Flames coaching staff to shift him up and down the lineup as necessary.
Behind a star-studded forward group of Auston Matthews, John Tavares, Mitch Marner, and William Nylander, the offensively gifted Kapanen is currently 8th in power-play time; bound to increase should a trade to Calgary occur. Interestingly enough, a whopping 91% of Kapanen’s points have been produced at even strength, indicating that the winger is an excellent even-strength contributor with his point totals bound to go up should he receive more power-play time.

What would the Flames have to give up?

Both the Flames and Maple Leafs are in the midst of a fierce playoff battle, indicating any deal involving the two teams would likely be a “hockey deal.” With the Leafs openly looking for a top-four defenceman, Kapanen could be the odd man out in Toronto. While a potential trade between the two Canadian clubs could wait until the off-season, it would be much more beneficial to all parties involved should the trade occur right now as both teams are in the playoff hunt. Furthermore, Kyle Dubas could let Kapanen go at a cheaper rate due to their desperate need for a top-four defencemen mid-season; making this the optimal time to acquire a top-six forward from the Toronto Maple Leafs.
Sportsnet’s Luke Fox recently linked Flames defenceman Travis Hamonic with Kapanen, stating that both players could help solve the opposite team’s problems. The Flames could give up pending UFA defenceman Hamonic, a 2020 third-round pick, a conditional 2021 second-round pick (sent to the Maple Leafs should they be unable to sign Hamonic to an extension), and Austin Czarnik (who was reportedly pursued heavily by the Leafs prior to signing with Calgary). Much like Treliving, Dubas is said to be only interested in players with term; thus, the only way I could see this deal panning out is if Dubas was certain that he could re-sign Travis Hamonic to an extension moving forward. Furthermore, this deal is also contingent on the fact that the Maple Leafs are okay with Hamonic’s injury recovery timeline. If not, the Flames would likely need to part ways with Brodie instead should they still feel they require the services of Kapanen (And even then, Dubas would likely want assurances that Brodie would want to re-sign). Both Hamonic and Brodie each would provide much-needed leadership to the Maple Leafs team, with their experience helping a young Toronto team build the highly sought after championship culture that Sheldon Keefe is looking for.

Where would he fit in?

Like a potential Palmieri move, a trade for a right-winger likely confirms Elias Lindholm’s fate as a center moving forward. A potential forward lineup could be the following:
Forwards:
Defenceman (if Hamonic is traded):
Defenceman (if Brodie is traded):
With the excellent consistency and play of the third line, I would be hesitant to break it up when the Flames are at a period where they desperately require some stability. That being said, Mikael Backlund has been on an offensive roll recently; making it a toss-up to see who would center the third line moving forward. While Kapanen isn’t necessarily negligent in the d-zone, I’d still be hesitant to put him on a line with Gaudreau and Monahan as all three are offense-first esque players. Thus, dropping Monahan to the second line with Andrew Mangiapane and Matthew Tkachuk while having the two-way centreman Elias Lindholm in between Gaudreau and Kapanen could be the optimal top-six that the Flames have dreamt of for so long. Also, it should be noted that Kapanen is not a rental player; meaning that this trade isn’t indicative of the Flames going all in this season, as the Finnish speedster still has two years left on his contract after this year.

For years now a common critique of the Flames has been the organization’s lack of skilled right-handed wingers. While they seemingly found the missing piece to their puzzle in Lindholm, this season, as well as the 2019 playoffs, makes it evident that the Flames are still one top-six forward away from making a deep playoff run.
With Jusso Valimaki already out for most likely the rest of the season, trading away Hamonic or Brodie would hinder the Flames’ ability to make a deep run in the 2019-20 playoffs. That being said trading for Kapanen is an attempt to acquire another core piece rather than go all in, as the Finnish winger is only 23 years old. This allows the Flames to further expand their cup window, as Kapanen is still just scratching the surface of his offensive potential. The imminent return of Valimaki before the 2020-21 NHL season, re-signing Kylington as well as one of Brodie or Hamonic, and adding more depth on the back-end during the offseason will resolidify the Flames d-corps come next season; allowing for more successfully cup runs for seasons to come.
Uncategorized
Recent articles from Prajeya Parmar