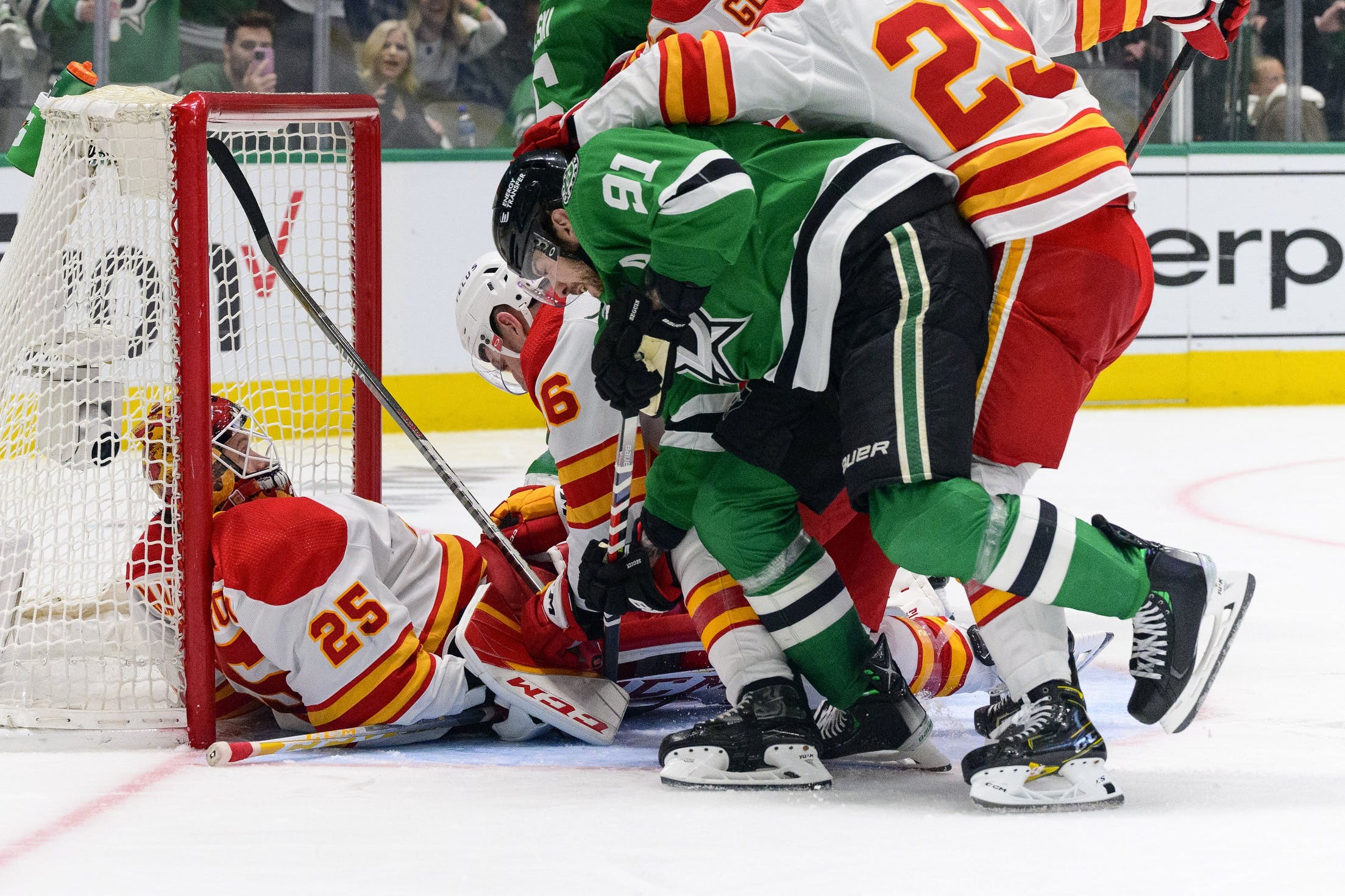 By Ryan Pike
6 months ago
The Calgary Flames had a chance to finish off their first round series with the Dallas Stars on Friday night. Unfortunately, they didn’t close things out: Dallas won 4-2 to force a deciding Game 7 on Sunday night.
Here are five takeaways from Game 6.

Dallas dominated at the (face-off) dot

The Flames won just 32% of their draws in Game 6, a series low. Calle Jarkrok was 0-for-12. Mikael Backlund was 5-for-18. Elias Lindholm was 12-for-27. Trevor Lewis was 3-for-6, leading the team. Puck possession is the crux of Calgary’s game, and they were chasing a lot considering how many draws they lost.
Just as Darryl Sutter said earlier in the series: the Flames got their butts kicked at the dot in Game 6, and they’ll need to be much better in Game 7.

The game in one stat

Via Natural Stat Trick, high danger scoring chances at five-on-five broke out like this:
The Stars did a nice job (a) burying their chances in the second period and (b) clogging up the ice in the third period. The Flames were very unlucky to not score in the opening period, primarily due to Grand Theft Oettinger.

Coleman, who won the Stanley Cup in each of the past two playoffs, has been excellent in this series. He plays every shift like he’s pissed off at the other team – which he probably is – and he ends up dragging his teammates into the fray with him.
In addition to being a tornado of chaos on the ice, Coleman led the Flames at five-on-five in high-danger chances (3), scoring chances (4) and shot attempts (10).

Chris Tanev got squished by Michael Raffl midway through the second period on Dallas’ second goal, with Tanev both getting (a) sat on by Raffl and (b) sticked across the back of his neck when Raffl fell forward. Neither seemed pleasant, and Tanev missed the entire third period.
The Flames went with Michael Stone on the second pairing with Oliver Kylington for most of the third period, though Nikita Zadorov took a couple shifts with Stone late in the game. With Tanev and Zadorov both likely question marks for Game 7 – Zadorov might be getting suspended – it seems like that we see Connor Mackey slot in and some new defensive pairings.

The Flames had one good line

So, the Flames rolled with 11 forwards and settled roughly with this configuration:
Gaudreau – Lindholm – Tkachuk
Mangiapane – Backlund – Coleman
Dube – Jarnkrok – Toffoli
Lucic – Lewis – rotating
The Backlund line had an expected goals percentage of 50.6, which is fairly good. The Lindholm and Jarnkrok lines were both sub-40% – Lindholm at 31.5% and Jarnkrok at 33.5%. When just one of your regular scoring lines can generate much of anything, that’s not a recipe for success.
So it’s not just the centres that need to be better (see: face-offs). Everybody needs to be better for Game 7.