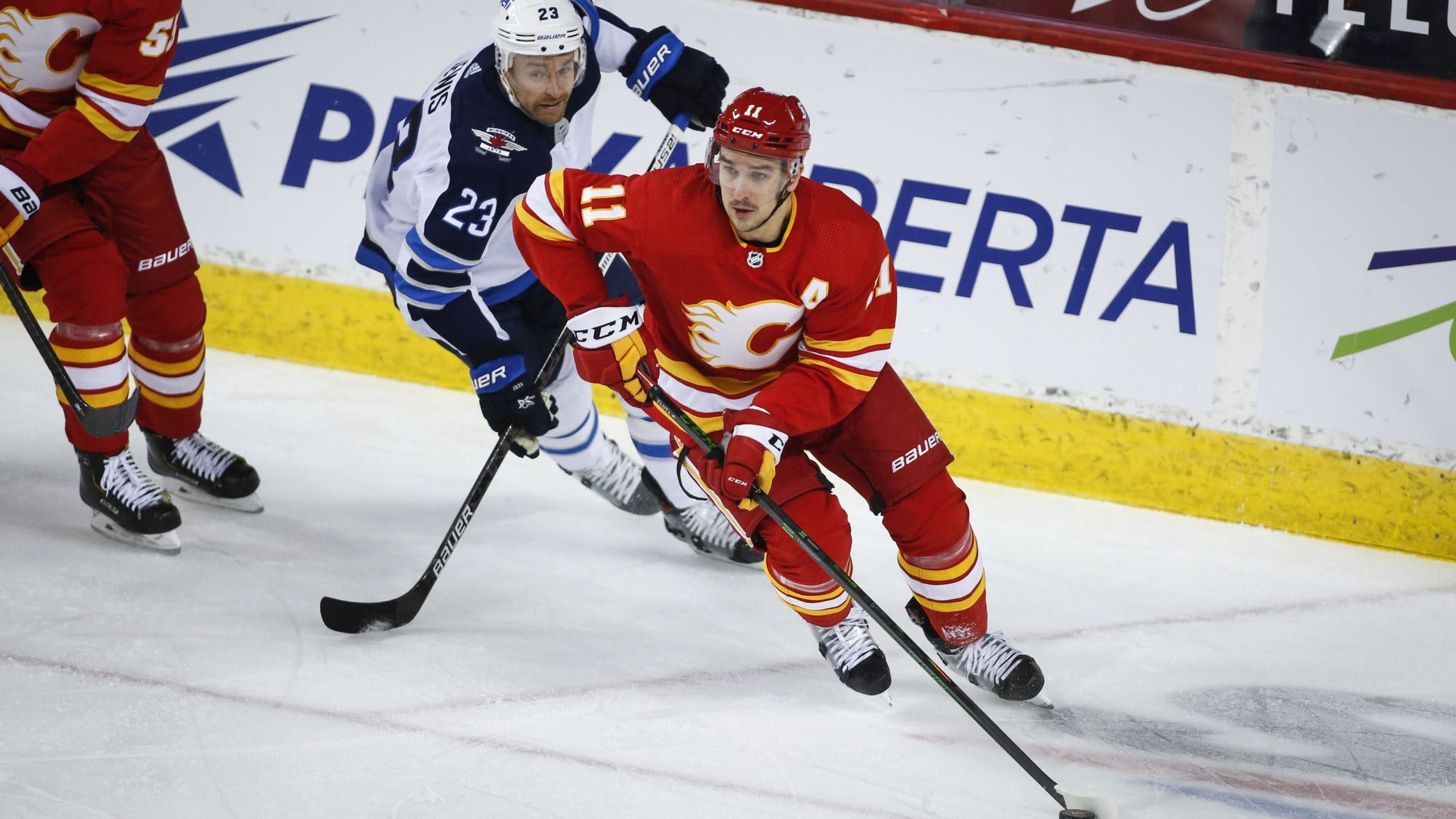 By Mike Gould
1 year ago
For the second game in a row, Mikael Backlund’s new line has risen to the occasion.
Backlund has a long history of being at the centre of some very good line combinations for the Calgary Flames, often helping to boost the production of those skating alongside him.
Joe Colborne scored 19 goals in 2015-16 while playing on Backlund’s wing; one season earlier, Lance Bouma potted 16 while playing nearly half of his minutes with the Swedish centre. Colborne and Bouma combined to score 12 more goals in the rest of their NHL careers.
Flames coach Geoff Ward needed to shake up his line combinations after centre Derek Ryan suffered an injury last week. With Backlund failing to generate much of anything early in the season, Mangiapane getting no bounces to go his way, and Milan Lucic floundering on the fourth line, Ward tried to solve (or, at least, consolidate) his team’s problems by putting them together.
Enter the “Dough Line.” What’s in a name? Well, Mangiapane’s last name literally translates to “eat bread.” Lucic and Backlund both make over $5 million to play in the Flames’ bottom-six. That’s a lot of dough on one line.
Two games later, Backlund and Lucic are no longer problems, and they’re also helping Mangiapane to capitalize on his chances. The Flames’ so-called third line has been extremely effective over the last 120 minutes of gameplay, collectively controlling 76.49% of the 5v5 on-ice expected goals against the Oilers on Saturday and improving that figure to 93.60% on Tuesday.
Each member of the Dough Line has scored a goal, assisted by both of their linemates, over the course of the last two games. Lucic has been excellent at retrieving pucks and creating space in which his teammates can operate.
Put simply, Lucic and especially Backlund both look worthy of their dough with the way they’re currently playing and producing. Backlund led all Flames skaters with 0.39 individual expected goals for at 5v5 on Tuesday, with Mangiapane and Lucic finishing second and third at 0.28 and 0.17, respectively.
According to Natural Stat Trick, the Dough Line controlled the 5v5 Corsi battle against the Jets by a count of 17-4 and generated seven high danger chances to their opposition’s zero.
If this line can emulate past Backlund combinations—and become the Flames’ new key defensive match-up weapon with consistently good results—opposing teams’ stars will be in for a real battle to generate any offense.

Who is Byron Froese?

Tuesday’s game against the Jets was Byron Froese’s 112th NHL contest. During the second period, he tipped a Juuso Valimaki shot past Connor Hellebuyck for his sixth career NHL goal. It was very pretty:
Froese—the pride of Winkler, Manitoba—has been around for a long time. He’ll turn 30 on Mar. 12 and has been a member of six NHL organizations. This is his second year in the Flames’ system, having signed a one-year deal with the club on Jul. 1, 2019 and spending the entire 2019-20 season serving as the captain of the Stockton Heat.
The Flames re-signed Froese to a two-year deal on Oct. 9, 2020. He collects one of the highest AHL salaries of anybody in the organization on a two-way contract, earning $350,000 this year and $400,000 in 2021-22. After scoring 19 goals and 42 points in 46 AHL games last season, that minor-league money is probably warranted.
Froese previously served as the captain of the Montreal Canadiens’ affiliate, the Laval Rocket, and he’s amassed 205 points in 330 AHL games. He has been a regular member of two NHL teams, the 2015-16 Toronto Maple Leafs and the 2017-18 Canadiens, both of which finished well out of a playoff spot.
On Saturday, Froese made his Flames debut in the incredible Blasty jerseys. He played just six shifts at even strength and mostly skated alongside Zac Rinaldo and Joakim Nordstrom. He also got nearly a minute of playing time on the penalty kill, during which he missed an assignment… to cover Connor McDavid. It did not go well.
Froese’s line fared reasonably well on Tuesday despite playing just 5:55 together at even strength. Josh Leivo replaced Rinaldo on Froese’s right wing and the end result was a line that could cycle the puck and control possession to an acceptable degree. The trio posted a 5v5 on-ice expected goals rate of 72.05%.
Look for Froese to exit the lineup whenever Ryan makes his return from injury. Still, as an injury fill-in, he has not looked particularly out-of-place. Froese will likely continue acclimating to the speed of the NHL with every passing game, but it may be wise for the Flames to explore also rotating prospects like Glenn Gawdin and Matthew Phillips into Ryan’s spot.

Elias Lindholm always plays it so cool, even when he’s scoring go-ahead goals on the power play with just 1:42 remaining in regulation time.
Matthew Tkachuk, meanwhile, is so happy about his assist on the game-winning goal that he’s smiling at everything. Including the sight of Lindholm’s right ear.
Good snap, Gerry Thomas.