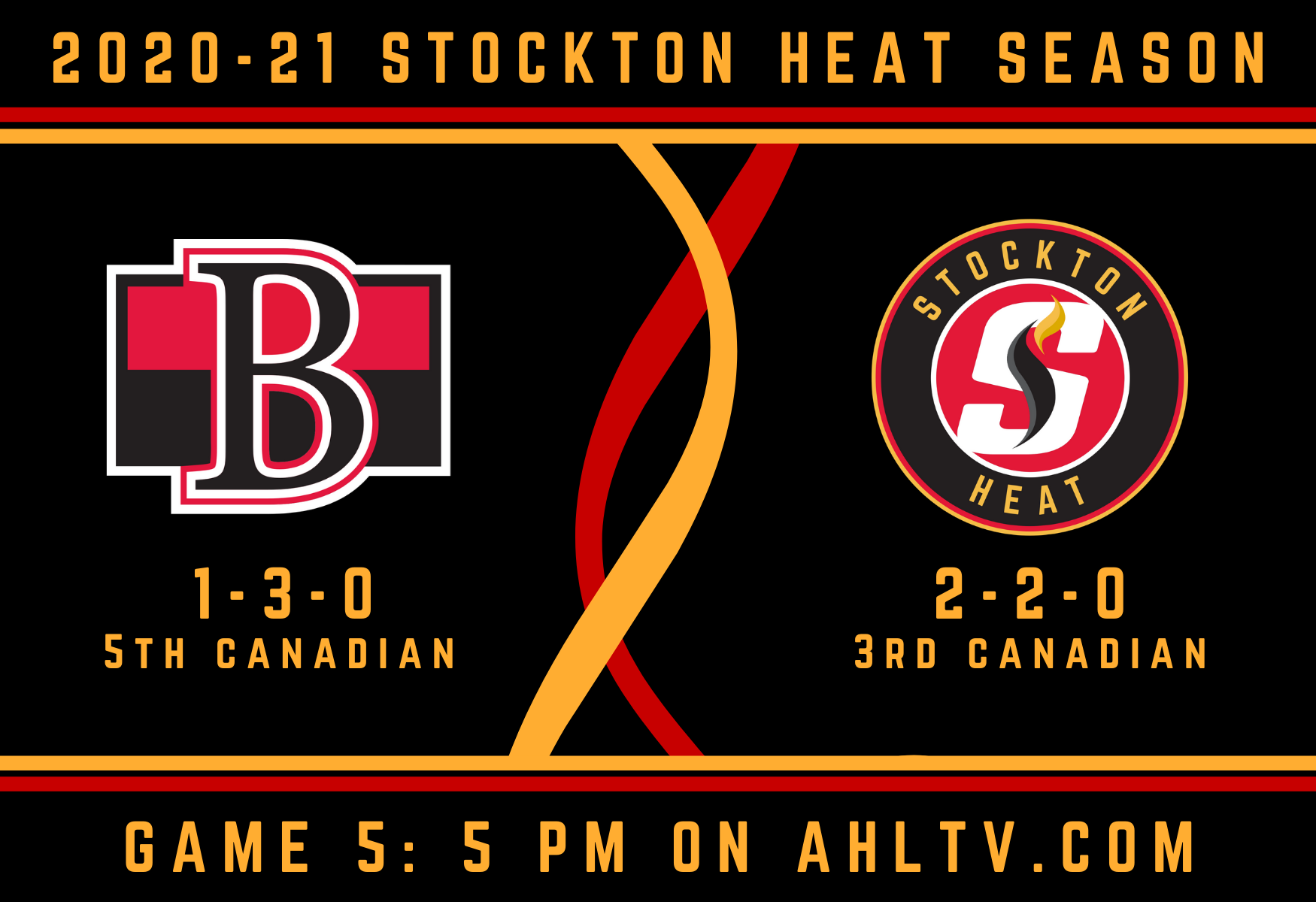 By Mike Gould
1 year ago
Farewell, Dustin Wolf. Hello, Kanata!
The Stockton Heat said goodbye to their up-and-coming goaltender in advance of their first road trip of this 2020-21 season. The 19-year-old Wolf is required to return to the Western Hockey League for one final season before turning professional in 2021-22.
Wolf’s departure leaves the Heat (2-2-0) without the man who backstopped them to both their wins this year. With Artyom Zagidulin still up with the big club and Louis Domingue presumably still on the shelf in quarantine, the Heat will likely look to 27-year-old veteran Garret Sparks to carry the load on this swing away from the Saddledome.
The Heat are in Ottawa Wednesday to take on a 1-3-0 Belleville Senators team languishing at the bottom of the AHL’s Canadian Division. Yes, they’re in Ottawa, er, Kanata—the AHL Senators have relocated to the Canadian Tire Centre for the time being. Sounds familiar.
Scoring winger Alex Formenton remains from last season’s 38-20-5 B-Sens squad; Josh Norris, Drake Batherson, Erik Brannstrom, Joey Daccord, and Rudolfs Balcers are all gone, plying their respective trades in the NHL.
Troy Mann’s Senators are a depleted bunch, to say the least, compared to last year. They also haven’t played in forever, last taking to the ice in a 2-1 loss to the Laval Rocket on Feb. 19.
Significant help could be arriving for the B-Sens in the form of 2016 first-round pick Logan Brown. Mann said Tuesday the 6’6″ forward will play in Belleville’s entire upcoming five-game homestand, beginning with Wednesday’s contest versus the Heat. Brown recorded 28 points in his 25 AHL contests last season.
It remains to be seen who will appear in goal for the Senators on Wednesday. With Marcus Hogberg on the shelf with an injury, the organization currently has Daccord, Filip Gustavsson, and Kevin Mandolese in the NHL in some capacity, leaving Tye Austin and Cedrick Andree as Belleville’s options in the crease. Neither player has an NHL contract or any professional experience.
Another loss for Belleville: 2020 first round pick Ridly Greig, who has headed back to the WHL’s Brandon Wheat Kings after a successful four-game stint in the AHL. With the Dub having just announced plans to create “Hub Centers” for the upcoming season in Kamloops and Kelowna, it looks likely that top Flames prospect and current Heat fixture Connor Zary will be following Greig’s lead in the near future.
The Heat went with these lines in their 8-1 win over the Toronto Marlies on Feb. 26:
Connor Zary – Adam Ruzicka – Matthew Phillips
Justin Kirkland – Luke Philp – Dmitry Zavgorodniy
Emilio Pettersen – Martin Pospisil – Eetu Tuulola
Alex Gallant – Mark Simpson – Colton Beck
Connor Mackey – Alex Petrovic
Colton Poolman – Alexander Yelesin
Carl-John Lerby – Zac Leslie
Garret Sparks
Meanwhile, Belleville deployed these combinations against the Rocket on Feb. 19:
Alex Formenton – – Logan Shaw
– JC Beaudin – Vitaly Abramov
Jack Kopacka – Clark Bishop – Parker Kelly
Joseph LaBate – Mark Kastelic – Yegor Sokolov
Jonathan Aspirot – Cody Goloubef
Hubert Labrie – Lassi Thomson
Olle Alsing – Jack Dougherty
(Wolf, Greig, and Reinhardt have all returned to the WHL. Daccord and Gustavsson are both currently in the NHL).

Stockton — Garret Sparks. The veteran goalie got outplayed in the Marlies series by two rookie AHL goaltenders. 19-year-old Dustin Wolf and six-season ECHL veteran Andrew D’Agostini both stood on their heads at times in the Stockton homestand; Sparks underwhelmed pretty consistently, giving up seven goals on 44 shots in parts of two games. Sparks was once a dominant AHL goaltender, particularly with the Marlies, but has since struggled to find his game both with the Heat and the Chicago Wolves.
Belleville — Mark Kastelic. With Greig out of the picture, Kastelic could play a bigger role for the B-Sens for the rest of the season. The 21-year-old right-shot centre is fresh out of the WHL and is just three games into his pro career, having recorded one assist. Kastelic served as the captain of the Calgary Hitmen between 2018 and 2020 and spent his entire five-year WHL career with the team. At 6’3″ and 210 pounds, the Phoenix product is an imposing presence who scored a lot of goals as a junior but could likely stand to work on his footspeed.

This game will be broadcast on AHLTV.com (subscription required). Puck-drop will be at 5:00 p.m. MT. Live game updates can be found on Twitter at @miketgould and @theheatbeat, or online at TheAHL.com.
Uncategorized
Recent articles from Mike Gould