How often should the Flames use David Rittich? By Mike Gould
1 year ago
He’s only played three games, but Jacob Markstrom is already looking like a marvellous acquisition for Calgary Flames general manager Brad Treliving.
Markstrom’s six year, $36 million contract is the largest ever handed out by the Flames to an unrestricted free agent on the market. It’s a deal that carries some risk given the inherent volatility of the goaltending position and Markstrom’s age in the final two years of the deal (he’s already 30).
However, right now, Markstrom looks like an even better version of the player who finished fourth in voting for the Vezina Trophy last season. After a solid debut against the Winnipeg Jets on Jan. 14, Markstrom played in both of the Flames’ games against the Vancouver Canucks and held his former team to just two goals on 59 shots.
The Flames currently boast a 2-0-1 record, good for the best points percentage in the North Division, but they will have to wait until Jan. 24 for their next chance to improve their record.
Who should occupy the Flames’ crease when they host the Toronto Maple Leafs on that date? Without a doubt, Markstrom has done nothing to relinquish his role as Calgary’s number one goaltender. He’s probably a pretty safe bet to play at least one, if not both, of the Flames’ upcoming two game set against Toronto.
That said, the Flames have another option who they presumably still feel more than comfortable deploying against any of their six North Division rivals—and not just to give Markstrom some rest.
David Rittich has become something of a forgotten man in Calgary since Markstrom’s arrival. Effectively relegated by default to the team’s backup goaltender position, Rittich is likely to play in a much smaller portion of the Flames’ games than he did in 2019-20.
The goaltending position is unpredictable and the Flames’ situation could always be complicated by injuries. Still, assuming both Markstrom and Rittich remain healthy throughout the season, it’s difficult to envision Rittich again playing nearly 70% of the team’s games as he did when he took part in 48 contests one year ago.
Rittich has always been a streaky goaltender and has had issues maintaining his momentum into the second halves of seasons.
David Rittich’s pre- and post-All-Star Game statistics in his past three NHL seasons
It’s difficult to pinpoint the cause of Rittich’s consistent late-season struggles. It is important to note that Rittich is still just 28, a relatively young age for an NHL goaltender, and never played more than 48 games in a season before coming to North America from the Czech Republic.
In 2018-19, when Rittich began to struggle, the Flames could turn to the similarly inconsistent Mike Smith. The following year, they replaced Smith with Cam Talbot—certainly an upgrade, but also no Vezina Trophy candidate.
This year, perhaps Rittich can feel comfortable knowing that he has a goaltender of Jacob Markstrom’s calibre to back him up and give him support whenever he plays. Markstrom is likely to play in the vast majority of the Flames’ games, but make no mistake—Rittich is a very talented goaltender in his own right who could see his own results improve with a less intense schedule and decreased pressure to be “the guy.”
It’s up to Rittich to show his teammates and Flames fans what he can offer as the other part of the Flames’ tandem. He’s a competitive player in the final year of his contract before he’s set to hit unrestricted free agency. Good play by Rittich in spot duty could potentially set him up for teams to offer him a bigger role—potentially even as a starter—in UFA.
On the flip side of that coin, it’s up to the Flames’ coaching staff to determine against whom and how often Rittich will play. There are the more obvious deployments—for instance, it’s difficult to see Markstrom playing both ends of many back-to-backs—but, if Rittich starts off with some good games, it’s possible that the Flames could feel comfortable giving him some extra starts. In doing so, the Flames could also further rest Markstrom for potential playoff appearances.
With all that being said, let’s take a look at the next six weeks’ worth of Flames hockey to assess where and when Markstrom and Rittich are most likely to play. 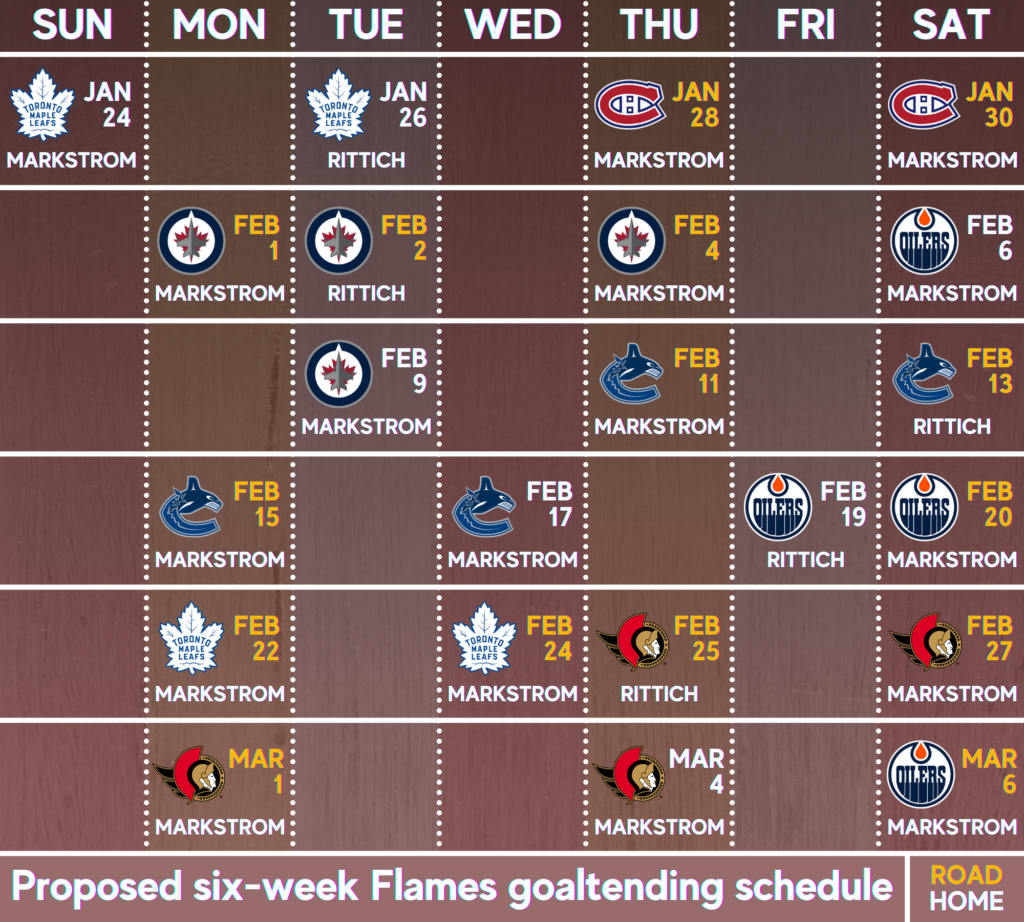 Graphic by Mike Gould.
This graphic displays the Flames’ next 22 games, good for 39% of the season. Rittich is pencilled in to play roughly once a week. He’s listed five times and would also be shown as the goaltender for Mar. 7, against Ottawa, if space permitted.
Rittich playing in six of the Flames’ first 26 games would project him for roughly 13 appearances over a 56-game season. That could turn out to be a low estimate if the Flames are safely in a playoff spot well in advance of the 56-game mark.
The proposed schedule has Rittich playing in four back-to-back situations and two additional standalone games. The Jan. 26 game against the Maple Leafs would pit Rittich up against the team he dominated on two separate occasions in 2019-20. He posted a .957 save percentage against Toronto last year.
How often do you think Rittich should play for the Flames this season? Should Rittich exclusively play in back-to-backs or should the Flames use their goalies more equally? Sound off in the comments!
Uncategorized
Recent articles from Mike Gould