Post-Game: Flames grind out a win against the Leafs 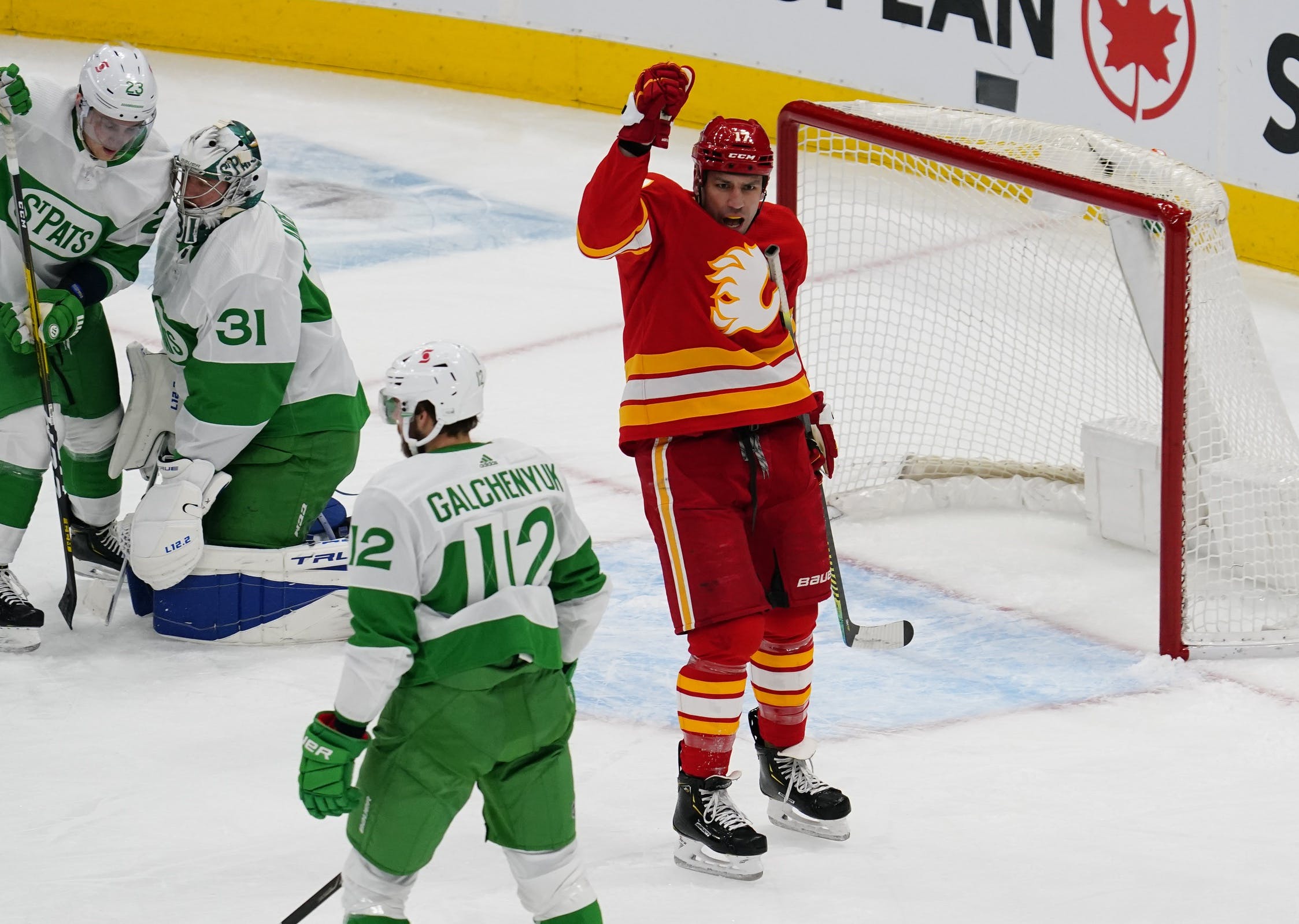 By Ryan Pike
1 year ago
On Wednesday, the Calgary Flames played loose defensive hockey and were thumped by Edmonton. On Friday in Toronto, they were much more structured and engaged against the Leafs. They weren’t perfect, but the Flames never trailed en route to a tight 4-3 win against Toronto.

The Flames didn’t generate a ton of good chances in the first period, but they made the ones they generated count.
The visitors opened the scoring 79 seconds into the game. Matthew Tkachuk received a pass from Nikita Nesterov and spun and fire from the side boards through traffic. The shot wobbled through traffic, off Travis Dermott, and into the net to make it 1-0 Flames.
A little while later, the Flames made it 2-0 off a nice bit of battling along the boards and a nice bit of passing. The Leafs turned the puck over and it was passed across to Rasmus Andersson. Andersson faked a shot, then dished to Derek Ryan in the slot for a one-timer to add to the Flames lead.
But the Leafs got on the board during a wacky sequence for the Flames. Johnny Gaudreau forechecked but blew a tire in the Leafs zone, giving Toronto a functional five-on-four advantage. Chris Tanev broke his stick. Noah Hanifin blocked a shot, but Jason Spezza jumped on the loose rebound and beat Jacob Markstrom to cut the lead to 2-1.
But the Flames answered back, as Hanifin held a loose puck in the Leafs zone and passed to Tanev. Tanev waited for traffic to build, then shot it past a screened Frederik Andersen to extend Calgary’s lead to 3-1.
But the Leafs scored one back late in the period, as Alex Kerfoot’s shot from the top of the circles deflected off Andersson’s stick and fooled Markstrom, beating him just under his arm to make it a 3-2 hockey game after one period.
Shots were 12-7 Leafs and scoring chances 16-2 Leafs in the first period.
The Leafs tied things up on a mirror image of Calgary’s second goal. This time, the Flames lost a board battle. Mitch Marner grabbed the loose puck, drove to the slot, and put the puck high past Markstrom to make it 3-3.
But the Flames answered back on the power play. Immediately off the face-off, Mark Giordano’s shot from the point glanced off a Leafs defender and past Andersen to give Calgary a 4-3 lead.
Shots were 9-7 Flames and scoring chances 9-5 Leafs in the second period.
The Leafs pressed in the third period, but the Flames managed to hold on for the victory. Shots were 8-2 Leafs and scoring chances 4-2 Leafs in the third period.

They were lucky, and they were good. The Leafs had better chances, and more of them, but the Flames were good enough in those situations to disrupt things here and there. And when the Flames had chances, they tended to take favourable bounces and go in.

Giordano hasn’t been Norris Good this season, and if we’re being honest he’s been maybe team’s fourth-best defenseman. But he was energetic, engaged, and frequently noticeable against the Leafs.

Giordano’s goal sent the Flames into the second intermission with a lead.

The Flames are 13-0-0 when leading after two periods and 11-2-2 when they score first.
The Leafs wore their white and green St. Pats jerseys, so the Flames wore their usual home reds as the road team.

The Flames (15-13-3) are back in action on Saturday night when they visit the Toronto Maple Leafs. Yes, again.
Uncategorized
Recent articles from Ryan Pike