Post-Game: Flames improved, but not perfect, in Vancouver 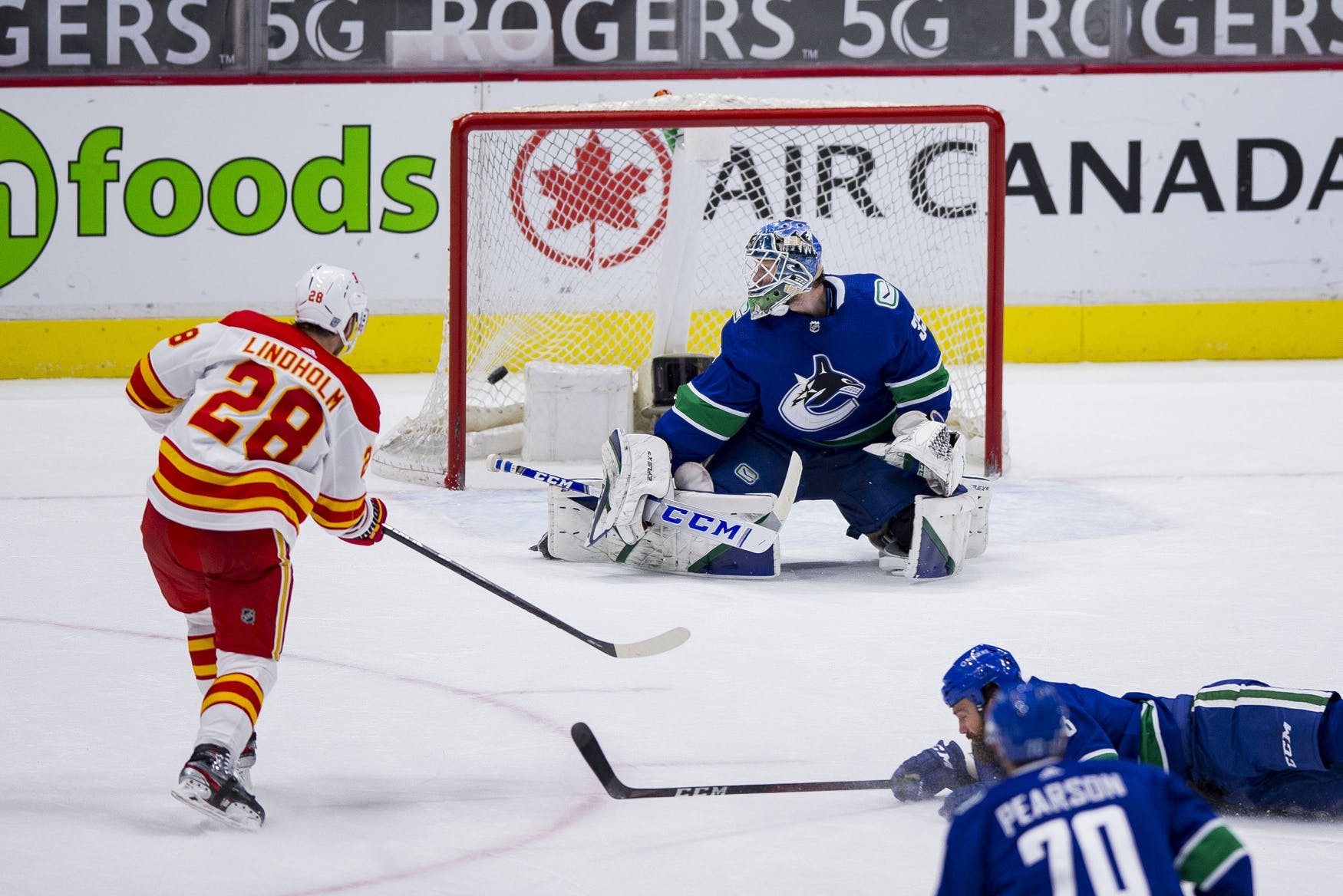 By Ryan Pike
1 year ago
The Calgary Flames looked like a different team on Monday night, as compared to their Saturday performance. They were rewarded for their improved effort, as they skated to a 4-3 overtime victory over the Vancouver Canucks at Rogers Arena in the finale of a three game set in Vancouver.

The Flames were better than last game in the first period, in the sense that they seemed emotionally engaged, could connect on passes, and tried to create offense. Some penalty trouble early on put them in a hole, though.
With Dillon Dube in the box, the Canucks had some nice power play looks but couldn’t pull the trigger. But just after the penalty expired, Tanner Pearson deflected a Quinn Hughes shot past Jacob Markstrom to make it 1-0 Canucks.
Later in the period, more penalties led to more Vancouver offense. Johnny Gaudreau and Connor Mackey took successive minors, which gave the Canucks a two-man advantage. Some nice passing moved from the puck from J.T. Miller to Brock Boeser to Bo Horvat, and Horvat’s one-timer from the slot beat Markstrom made it 2-0 Canucks.
But the Flames got one back before the end of the period. On an extended shift in the offensive zone, Rasmus Andersson pinched, wheeled around the net, and found Milan Lucic in the slot. Lucic’s wrister beat Thatcher Demko to cut Vancouver’s lead to 2-1.
Shots were 8-7 Flames and scoring chances 6-2 Flames in the first period.
The Flames tied it up in the second period. A smart bit of pressure by Rasmus Andersson caused a turnover, and a smart pass by Andersson sprung Elias Lindholm on an offensive zone rush. Lindholm opted to shoot, beating Demko with wrister to make it 2-2.
The Flames took the lead off an unforced error by the Canucks. After accepting a pass from Demko behind the net, Nate Schmidt tried to make an outlet pass across his own crease. At least, we think that was his fuzzy logic. His pass went off Demko’s skate and trickled across the goal line to give the Flames a 3-2 lead. Dube was credited with the goal.
Shots were 12-10 Flames and scoring chances 11-11 in the second period.
The third period was back and forth, with the Canucks pressing at few points, but the Flames defended well. The Canucks finally answered back with 30.2 seconds left in regulation, as Boeser beat Markstrom through traffic off a late face-off win to tie the game at 3-3.
Shots were 16-6 Canucks and scoring chances 8-6 Canucks in the third period.
Onward this game went to overtime. Johnny Gaudreau scored a power play goal 23 seconds into overtime to make this a 4-3 Flames victory.

Why the Flames won (in OT)

They weren’t perfect, but they were the better team five-on-five for much of the game. They still need to work on (a) staying out of the box and (b) making their power play dangerous, but they were much, much better than they were on Saturday night.
If this is how they can look for much of the rest of the season, they’ll have a fighting chance most nights. It’s a bit of a shame that the Canucks managed to scrape together a point, though.

Andersson was instrumental on each of the Flames’ first two goals and was generally excellent all evening.

After the way the Flames played for good chunks of the game, it was disappointing to see this one make it to overtime. Boeser’s late goal to tie it up is precisely the type of goal good teams don’t give up too often.
They won in overtime, but you have to hope that extra point doesn’t come back to haunt them at the end of the season.

In overtime, the Flames rolled with four forwards on their PP: Gaudreau, Monahan, Tkachuk and Lindholm.
As noted elsewhere, Mackey had an assist on Calgary’s first goal and that’s his first NHL point.

The Flames (8-6-1) play the Canucks on Wednesday night, but this one will be in Calgary!
Uncategorized
Recent articles from Ryan Pike