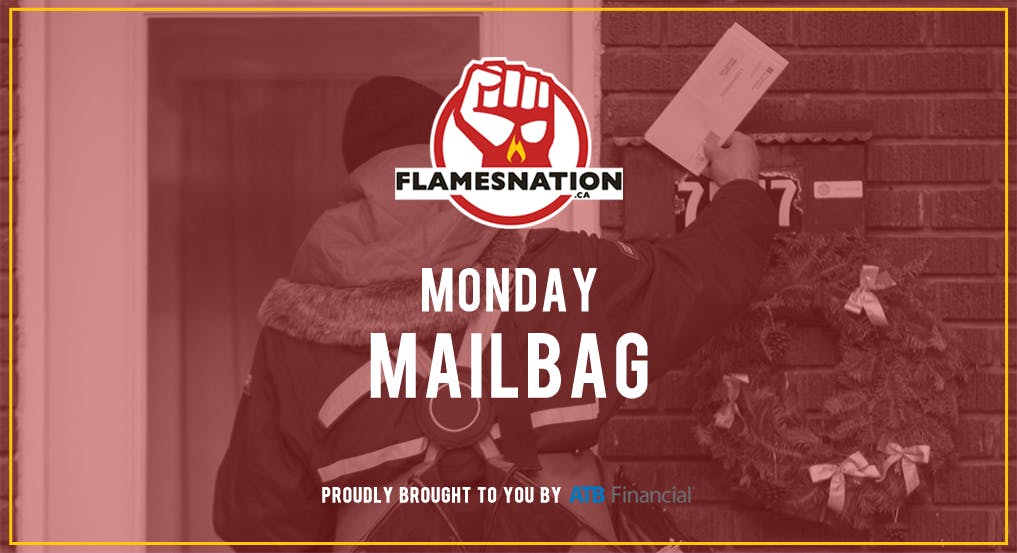 By Kent Wilson
5 years ago
As the playoffs heat up, the Calgary Flames offseason is only starting to unfold. Aside from the doldrums of August, the period between the second round and Cup final tends to be operational dead time for the teams who are out of it.
Which isn’t to say Brad Treliving and company are simply on vacation. The front office has a lot to prep for in June – the expansion draft, the entry draft, and then free agency all occur in rapid succession. And given the fact that the two drafts may act as trade catalysts, it likely means Brad will have his fingers in a number of different pies by the time the first day of summer rolls around.
Advertisement
Ad
Advertisement
Ad

The real question is – what would Vegas want? There’s a chance they’ll take him for nothing. On the other hand there may be no way to take that deal.
When it comes to expendable assets, the Flames probably have a few they should be willing to part with. Hunter Shinkaruk, Oliver Kylington (*gasp*), and Mogan Klimchuk come to mind, although guys like that probably aren’t enough to get the deal done on their own. Unfortunately, Calgary currently lacks a second and third round pick this year, meaning they don’t have the typical currency for these kinds of transactions.
Advertisement
Ad
Advertisement
Ad
Which means the club would likely have to surrender a top prospect (Jon Gillies, Tyler Parsons, Mark Jankowski, Rasmus Andersson, Dillon Dube, etc.) or their first round pick (16th overall). I don’t think the org will be willing to do that, especially since they can buy Brouwer out if needed:

Buying out Troy Brouwer would incur a cap hit of 1.5 million for 6 seasons. pic.twitter.com/ADCwHlZPHY

@Kent_Wilson @FlamesNation Q: Is it just my imagination or has time started to heal "Elliott has to go" feelings? Can Flames succeed in 17-18 w Elliott as their #1?

@Kent_Wilson @FlamesNation Not enthusiastic about Flames' offseason goaltending options. Give me reason for optimism?

Here’s the problem for Brian Elliott – he visibly buckled in the spotlight of the playoffs and he doesn’t have a history as a clear-cut starter in the NHL. Add in his terrible start to the season and it likely makes it difficult for Flames management to trust him moving forward.
Advertisement
Ad
Advertisement
Ad
The flip side is, Elliott probably won’t be able to ask for a big, long-term deal after his rollercoaster regular season and spectacular flameout in the playoffs. Which means he might be an option to sign as a two-year stopgap if all else fails this summer. There is still a mountain of evidence from the past five-plus years that suggests Elliott is a better than average goalie, meaning he could be in line for a rebound. However, I’d be very surprised if Treliving and co. go back to that well, given how completely Elliott failed to meet expectations.
As for finding other goaltenders, there likely hasn’t been a better time to a buyer in the netminder market. There are a handful of UFAs to consider, including Elliott, Ben Bishop, Jonathan Bernier, and Antti Raanta. Not to mention a bunch of guys who may be made available due to the expansion draft. Aside from the obvious Marc-Andre Fleury in Pittsburgh, there is: Calvin Pickard, Philipp Grubauer, Petr Mrazek, Joonas Korpisalo, and James Reimer.
Advertisement
Ad
Advertisement
Ad

@Kent_Wilson @FlamesNation Can Tre nab a top 4 defender in a trade because of expansion? I see Ducks/preds most vulnerable. Who could be available?

No, because that puts the Flames in the same situation as the teams in question.
If Calgary adds another top four defender prior to the expansion draft, that means they’d have to expose one of T.J. Brodie, Mark Giordano, or Dougie Hamilton. Otherwise, the club has the option of protecting eight skaters and one goalie – meaning four defenders and four forwards. Up front, that would mean protecting Sam Bennett, Johnny Gaudreau, Sean Monahan and Mikael Backlund, leaving guys Michael Frolik and Micheal Ferland exposed (one of whom would definitely be plucked by Vegas).
Advertisement
Ad
Advertisement
Ad
So in any trade for a top four defender, the full price would be (trade assets + one of Frolik or Ferland). It would have to be an awfully good player for that to make sense for the Flames.

@Kent_Wilson @FlamesNation What hurt Brodie's play more this season, playing him on LD or moving him away from Gio? Who do we get to play with him next year? RD? LD?

No question it is losing Giordano as a partner. When you go from playing with one of the best defenders in the league to a rotating cast featuring Dennis Wideman, Deryk Engelland, and Michael Stone, it is bound to make a difference.
Advertisement
Ad
Advertisement
Ad
Unfortunately for Brodie and the Flames, there aren’t a lot of great options currently. The best, as mentioned ad nauseam on FN, is Cody Franson, who should come at a reasonable price and has put up perpetually good underlying numbers over the years. Other guys I would consider include Brendan Smith, Brian Campbell, and Andrei Markov (assuming any of these guys could be had relatively cheap).
Other well-known names are Dimitry Kulikov and Karl Alzner. I am less enthusiastic about these options because each player’s reputation seems to outpace his actual ability:
Neither guy can score and neither guy can effectively drive play. Best to look elsewhere since both guys are likely to be looking for relatively rich contracts this summer.
Advertisement
Ad
Advertisement
Ad

The thing is you can never really construct the “ideal” fourth line because it is typically made up of all the guys on your roster who can’t play higher in the rotation.
That said, my philosophy on roster construction would move away from the archetypal fourth line of “bangers and crashers” and to one of situational opportunity. By which I mean my fourth line is where I would stash specialists and hopefuls with upside.
By specialists, I mean guys who have a clear area of the game where they are above average even if they can’t really hang at even strength anymore. That could be PP specialists, PK guys, shootout wizards, or even faceoff experts. Usually, these are former top six forwards or stars who are starting to slow down.
Advertisement
Ad
Advertisement
Ad
On the other hand, I’d also use the fourth line to rotate in the top performing hopefuls from the farm during the season. The bottom of the rotation should be where an organization tests their prospects and helps the kids get their feet wet. Unfortunately what usually happens is a team’s ill-considered contracts sink to the bottom, stuffing the pipeline with big, immovable deals.
Speaking of which, I’d always shoot to have guys at around $1M or less on the fourth line. The salary cap is an efficiency contest after all, so organizations should be spending most of their dollars on stars and impact players, not the depth.
Advertisement
Ad
Advertisement
Ad
In the Flames’ case, it’s actually impossible to construct the ideal fourth line given the contracts on the books currently. At least two of Troy Brouwer, Matt Stajan, and Lance Bouma are likely to be back next year, making it difficult to fulfill the requirements listed above.
If we pretend none of those deals exist, however, we could do something like this:
Curtis Lazar – Mark Jankowski – Jarome Iginla/Sam Gagner/P.A. Parenteau

@Kent_Wilson @FlamesNation -is it even remote possible for an Iginla Swan-Song???-

I know…
I know…
If… but… etc
-last opportunity?

I personally think all parties should move on, but it’s certainly possible – as long as Iginla would be willing to come back to Calgary as PP specialist/depth option on a cheap deal. I’m not sure he’d be willing to do that, honestly.
Advertisement
Ad
Advertisement
Ad
And, as mentioned, the Flames have a very cluttered bottom of the rotation right now thanks to all the expensive vets hanging around. If Treliving could clear out all of the deadwood from the fourth line it would be far more palatable to bring Iggy in as the fourth line RW/PP guy. Right now, I don’t really see where he fits.

@Kent_Wilson @FlamesNation Who do you see as realistic targets for the #Flames in terms of a Top-4 D to play with Brodie and Top-6 F to play with Sean and Johnny?

Advertisement
Ad
Advertisement
Ad
We’ve already gone over the partner options for Brodie above. Another top six forward is an even more difficult proposition this year. T.J. Oshie and Alexander Radulov are the cream of the crop, but they are unlikely to land in Calgary. After them, you have guys who are decent but aging rapidly: Justin Williams, Jaromir Jagr, Radim Vrbata, and P.A. Parenteau.

My default position would be to trade down and get a few more picks in the top 60 if possible. That said, it also depends on who is available at 16 when the Flames pick. If Nick Suzuki somehow falls to the Flames, for instance, then I would take the player and eschew the trade.
Advertisement
Ad
Advertisement
Ad
Otherwise, Treliving should definitely see if any teams below the Flames would be willing to swap a second round pick in order to move up a few places.

My guess is it will be a bridge deal in the two-year, $6M range ($3M/year). While it might be interesting to contemplate a longer-term contract, chances are neither the team or player is too interested in that sort of gamble at this point.

At ATB, we hear you: being a hockey fan is expensive. We want to make it cheaper for you. Tell us how you and your squad celebrate hockey and you could win $1,000! Learn more at ATB.com/yycfans