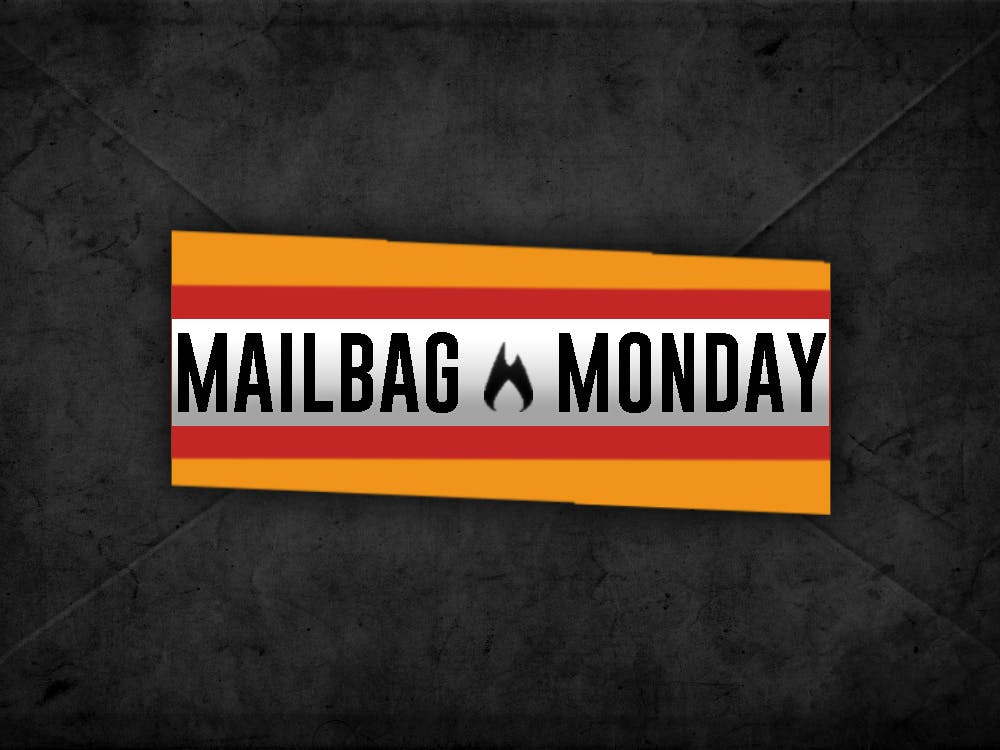 By christian tiberi
3 years ago
We’ve gone on about the big issues of the Calgary Flames off-season for a long time now: what’s happening with TJ Brodie and/or Michael Frolik? What’s happening with Matthew Tkachuk? How can we lose players and also get better? Et cetera, et cetera.
Let’s give everyone a break from that conversation and look at some of the more minor issues: interesting cap circumvention, what’s happening with minor league players, and old player ideas we all forgot about.

The issue with this particular LTIR scheme is that it’s not enough to sign Matthew Tkachuk. With LTIR, you don’t get to go over the cap with the full value of the contract you are LTIRing, you get the value of the contract minus the space you currently have. Even if the Flames max out their cap space (adding seven million in hits between now and the day before the regular season starts), Hossa’s contract is only $5.275M. Tkachuk is making something between $7-9M next season, depending on how long his contract is. That’s not enough to cut it.
Advertisement
Ad
Advertisement
Ad
A second contract is needed. Unless Milan Lucic also suddenly becomes allergic to his gear, they could look at picking up Johan Franzen ($3.954M cap hit, $1M salary, 2020 expiry) or Henrik Zetterberg ($6.083M Cap hit, $1M salary, 2021 expiry) to help boost that LTIR number. If the Flames can help their cash strapped pals while fixing their own problems
Would the Flames do it? Unlikely. It holds Tkachuk out of training camp while also adding hefty cap hits (Hossa, Zetterberg) for the 2020-21 season too. They also have to be cap compliant on the day of the regular season, which will require some more tricky maneuvering. I think the Flames would be more interested in the plan everyone’s heard about since this off-season began: trade away TJ Brodie and Michael Frolik for high end assets, pay Tkachuk, and let various youngsters fill the gaps.
Will writes

What’s going to happen with Gillies since he is on a 1 way this year and Talbot and Rittich are already locked into the 1 and 2 slots.

I think Jon Gillies is gone via trade. One way and two way doesn’t matter because his salary can be fully buried regardless (it’s just more out of pocket cash for the Flames to spend, but no cap impact), it’s more so because he’s just plateaued when the Flames needed him to be ready. Goalies do have a longer development curve, but Gillies seems to already be what he is at age 25.
Advertisement
Ad
Advertisement
Ad
With the projected AHL roster including Artyom Zagidulin and Tyler Parsons, two goalies who will need extensive time, Gillies is the odd man out. They’ll probably trade him for whatever they can, AHL depth, a late round conditional pick, or “future considerations.” With Gillies requiring an actual NHL salary without much justification for it, teams probably aren’t eager to give up any assets, but if the idea is that the Flames need space, then the Flames won’t care. They gave up literally nothing (termed “future considerations”) for Kevin Poulin a few years back, and took back nothing when they traded away Tom McCollum (a conditional seventh, conditions not met). It’s maybe not the haul people thought Gillies could get a few years ago, but seeing how his value has tanked, it’s unlikely the Flames get anything tangible. He was the AHL’s worst goaltender last season, you aren’t getting anything good for him.
The lone reason he could stay is because he is the Flames’ longest tenured goalie (seriously). Gillies may not be a bonafide NHL starter, or even a regular backup, but he already has NHL experience and can probably be a decent goaltender in an emergency situation. The Flames are likely treating Parsons and Zagidulin as multi-year projects and don’t want the interruption and pressure of an NHL call up to impact their development. With Gillies, he’s probably not going to be hurt if you have to yo-yo him between two leagues.
Advertisement
Ad
Advertisement
Ad

It was reported earlier that the flames had interest in Maroon. Do you believe that to still be the case? And if so, where would he fit in the lineup?

I don’t think so. Acquiring Lucic filled the role Patrick Maroon would’ve occupied on the Flames, so there’s no need to commit more money. Maroon will probably top out at 20 points and provide toughness in a bottom six role, but for a price that will gum up an already gummed up cap situation.

Is Lindholm’s future as a RW or a C?

I think he’s going to be a RW for at least next year. The Flames’ depth on that right side is still extremely barren, so why move away your one good RW, especially when your C depth is pretty stout. There’s no other right handers except for Derek Ryan and Austin Czarnik, which limits your options severely.
Plus, we should also mention that a lot of Lindholm’s days in Carolina were spent at centre, and it wasn’t necessarily the most effective use of his time. He is very good at faceoffs, so he has that part of playing centre down pat, but his offensive numbers weren’t as great and his defence wasn’t much better. Moving from C to RW has done a lot for Lindholm’s all around game, and it’s probably the most effective place for him.
Advertisement
Ad
Advertisement
Ad
Remember that Bill Peters spent many years in Carolina trying Lindholm at C. There’s probably a reason he wasn’t keen on trying it again this season.

Is Oliver K going to make the team?

It’s an interesting question. He was better than expected last season, and with Michael Stone gone and TJ Brodie likely on his way out, that doesn’t leave the Flames with many options. From their regulars last season, that leaves them with Mark Giordano, Rasmus Andersson, Noah Hanifin, Travis Hamonic, and no one else. Brandon Davidson is here, but he shouldn’t be a regular minutes muncher after a whole season as the Blackhawks’ 7D. The AHL depth is currently Rinat Valiev, Alexander Yelesin, and Andrew Nielsen. Yelesin is right handed, but he’s a North American newcomer and will require time in the AHL before moving up.
With no other signings (as of this moment, but the remaining UFA talent pool is extremely thin for the Flames’ price point), that leaves the door open for at least one, but probably both of Oliver Kylington and Juuso Valimaki. So the answer is yes, but the next question is where?
Valimaki and Kylington could form the third pairing, and play sheltered minutes in order to minimize the flaws they still need to work out as youngsters. But as both are lefties, which one will play the right side? Both are well regarded for their skating, but Kylington is the speedier and more agile player who can cover ground more quickly, so it seems more likely he can make the transition more easily.
Advertisement
Ad
Advertisement
Ad
I don’t know how the Flames approach this one, but that is my best guess. They’ve got a lot of promising youngsters and nothing else at the bottom of their depth chart. Unless they find a bargain bin righty to play their third pairing, they’re going to have to force a youngster to play that position. It gets them NHL time, so it’s not the worst thing in the world.

Would u move a prospect to Oilers for Puljujarvi? He’s a big RW and we are in need of those and if the no trading between the teams has ended it cud make sense to move a Kylington for Puljujarvi in my opinion wud love to hear your thoughts?

Not technically a mailbag question, but an interesting question nonetheless.
I would just offer sheet Jesse Puljujarvi if I were the Flames. Puljujarvi’s career history is all potential and no results: think Curtis Lazar, but with a much higher ceiling. He’s played well in the past before, but only when he’s with Connor McDavid, and that’s true of a lot of folks. It’s not worth giving up a decent prospect.
The offer sheet is a more effective route. Evolving Wild’s contract projector sees him getting a two year, $1.367M bridge deal. That number is significant, because it falls below the threshold for any compensation for an offer sheet. You don’t give up anything (even if you bump that number up a bit, you only give away a third round pick, which is also decent compensation), you fill a need for very cheap, and if it doesn’t work out, you can just cut bait, no questions asked.
Advertisement
Ad
Advertisement
Ad
So why wouldn’t the Oilers match? Well, there’s a few complications. First off, they’d be at an impasse with a player who doesn’t want to play for their team. That’s going to cause friction in a locker room which allegedly sees issues every year. They also can’t sit on him and trade him because a matched offer sheet means that the team can’t trade him for a year. If the Oilers matched, they’re effectively making a seven figure punt.
But what if the Oilers match? Well, the Flames wouldn’t lose out on that much. Puljujarvi is a reclamation project worth taking up, but they can live without him. But for Puljujarvi, it’s bad news if the Oilers match. First off, he can’t sit out or else he’ll be in breach of contract. He also can’t be traded, which effectively forces him to play for a team he doesn’t want to. That nightmare scenario is probably what his agent is advising against: don’t sign an offer sheet, because the Oilers can use that against you too.
I would go for it, but it’s more likely than not that the Flames don’t wind up with Puljujarvi. I also like Puljujarvi, and I don’t want him to be forced to play for the Oilers. Could you imagine such a hell?
Advertisement
Ad
Advertisement
Ad
MAILBAG PRESENTED BY DAYTONA HOMES
Dreaming of a weekend vacay? It’s your chance to Wine Down in the Okanagan! Visit the Showhome Village in Chappelle Gardens in the month of June for your chance to win a relaxing weekend getaway for four! Directions to showhomes here.