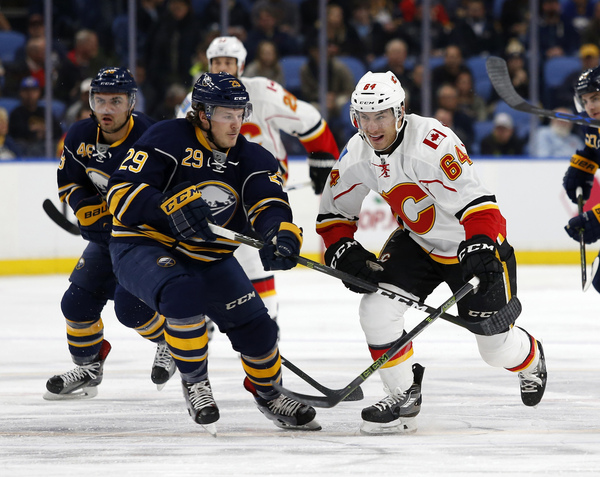 (Timothy T. Ludwig / USA Today Sports)
On Sunday night, the Calgary Flames began their road trip with some smart 200-foot hockey. They got timely goals and were able to work around some troubles that Sean Monahan’s line had, and they beat Detroit. Tonight? Things didn’t quite work as well as they did last night. At all.
Three power play goals against in just over a minute and a half was all it took to sink Calgary’s chances of winning back-to-back games, and they fell 4-2 to the Buffalo Sabres.

After a strong effort against Detroit, the Flames came out of the blocks strongly in the first. They opened the scoring off a nice defensive play by Dougie Hamilton. Hamilton poked the puck away from a Sabres forward, springing the entire 3M Line (Matthew Tkachuk, Michael Frolik and Mikael Backlund) on an odd-man rush. Frolik delivered a gorgeous saucer pass to Backlund, who put the puck over Robin Lehner to make it 1-0.

The shots were 13-9 for Buffalo.
Unfortunately for the visitors, the Sabres were a lot better in the second. Doubly unfortunately, the Flames were trying to execute an odd combination of being overly fancy and somewhat lazy with their fundamentals in the period. And it cost them dearly, and repeatedly. They gave the Sabres five power plays in the period, including a full two minutes of five-on-three time. The Flames much-criticized penalty kill lived down to reputation.
Advertisement
Ad
Advertisement
Ad
They ended up getting tagged for three goals in the span of 91 seconds, two of which were on the power play and the third of which might as well as been given how poorly they were looking in their own end. So how bad is the Flames penalty kill? This bad:
Shots were 13-9 for Buffalo in the second.
The Flames had a bit of a push early in the third, with Tkachuk deflecting a point shot past Robin Lehner to make it 3-2. But that’s as close as the Flames got, as yet another lapse by the Monahan line caused utter chaos in the Flames zone and Nick Foligno slid the puck under a sprawling Elliott to make it 4-2. Shots were 13-6 for the Flames in the final frame.

WHY THE FLAMES LOST

Let’s call a spade a spade: the Monahan line was no damn good tonight. The Flames penalty kill was rough – three goals against in six chances – but they only had to kill that many penalties because a Monahan lapse led to two minors and then Brouwer took another as soon as he got out of the box.
Give any power play that many chances to score on you, and they probably will. (Well, except for the Flames power play, I guess…)
Advertisement
Ad
Advertisement
Ad

Two penalties on one failed zone exit by Monahan.

Monahan failing to get the puck out of the zone allowed Evander Kane to get the entry which led to the 5-on-3.

Tkachuk had a goal and an assist, and caused a ruckus all game long with his speed, smarts and physicality.
Backlund and Frolik were also pretty good. The entire bottom six was also solid. Heck, Elliott let in four goals but he was only really on the hook for the fourth goal (because he didn’t seal off the post and the shot slid under his leg).

(Percentage stats are even strength. Game score is overall.)

Capped with their performance on Buffalo’s 4th goal. https://t.co/Hn14f3DnIb

If #Flames penalty-kill is going to stink, their power play can’t. Not a good combo.

The Flames (8-12-1) fly to Columbus tonight are have a CBA-mandated day off tomorrow. They’re back at it on Wednesday night against the Blue Jackets.
Advertisement
Ad
Advertisement
Ad