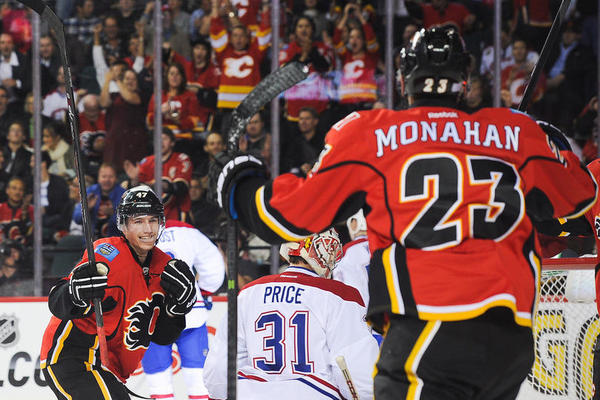 I’m not sure how much to write about Sean Monahan because we all watched him the same amount last year. I, along with a couple of other mysterious figures at FlamesNation, have had the same sort of idea about Monahan since day one: it was a mistake to keep him at the NHL level this year but holy crap this kid is real good at hockey!

Last year’s sixth overall pick is our number one prospect on this year’s edition of the Flames Fifteen.

You can look at part one of the above statement and think me insane; but I stand by it. When I started to write this profile, I didn’t want to come across as negative – I seem to have a reputation of being a little harder on Jankowski and Monahan. Unfortunately, all I could find were a.) reasons that a year of Monahan’s ELC has been wasted and b.) things that might actively hurt his development going forward. Neither of these things are technically the player’s fault, but they might come back to bite him in the ass.

A quick note on my ranking – I believe Sven Baertschi has a little more offensive upside than Monahan, but Monahan plays the more influential position. It was literally a coin flip for me and the quarter said caribou. It just as easily could have gone the other way. Fun fact: eagle-eyed readers will notice just one point separated John Gaudreau and Sean Monahan. Book of Loob robbed all of you of a situation in which we’d have to go to like the 5th tiebreak and/or done a run-off poll, both of which would’ve been #super #cool #supercool. Screw you, Floob.

The good thing that Monahan did this year was score goals. 22 of them, in fact. However, he had to do it in a historically lucky way: the 17th best SH% since the lockout. The amount of players currently in the league who have averaged a 15.7% shooting percentage or better over their career is 6. It’s entirely possible that Monahan is one of those 6 (well, 7) guys. I just don’t think it’s likely and I’m pretty sure he’ll regress next season closer to the average. If Monahan had shot 10% – a little higher than average – he’d have 14 goals and 26 points in 75 games. A little luck has changed the perception of him an insane amount.

Of course, in the previous article we touched on his lack of production once Sven went down, as well – just 19 points in 51 games, which is certainly a poor performance. The entire summer, we were saying that we didn’t want Sean Monahan being in the NHL because of 9 amazing games. Unfortunately, that’s probably what happened. Monahan struggled in every way after those first 15 or so.

Some speculate that’s due to the fact that he missed an extended amount of time with injury. That’s fine, but struggles like that only last two, three games as a player gets back into game shape. Of course, I’m assuming that Monahan was fully healthy when he came back. Why would a team allow a player who’s supposed to be the future to come back and potentially damage himself in a year that means nothing?

We also have more of an advanced view of Monahan than any other prospect at this point, as well – and it doesn’t paint a pretty picture. Monahan, despite being sheltered for large points of the season, got his head bashed in raw and relatively this year. He faced easy competition – Extra Skater has only McGrattan and Colborne having worse opponents. He also started a huge amount in the offensive zone; more than 55% of his non-neutral zone face-offs were in the attacking end. Lastly, even though he had the benefit of both of those things – he got his skull caved in when he was on the ice, posting a 43.8% corsi and a -4.2% corsi rel. That rates him (league-wide) at 405/435 and 380/435, respectively. If I told you before the season that there would’ve only been thirty NHLers worse than Monahan, would you have kept him up? 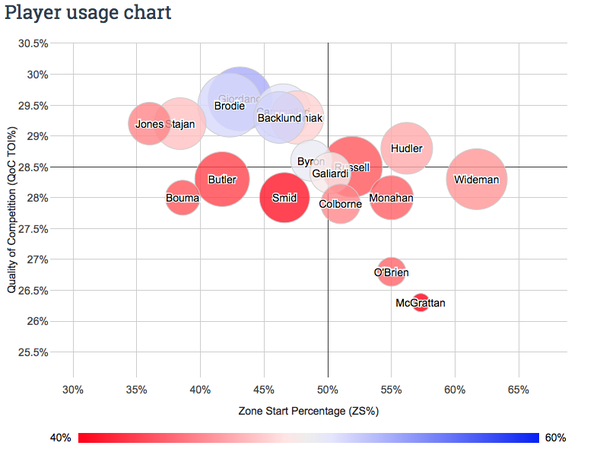 I think this is where the Flames might’ve actually been harming his development. I don’t see how a player can be positively affected by going out there and spending the majority of his time a.) in his own zone b.) without the puck and c.) playing against players much better than he. I don’t believe that playing the sport with those three things dominating the amount of time he’s on the ice is good for his development. Comparable players – Max Domi, Kirby Rychel, Bo Horvat and Scott Laughton – all went back to the OHL this season and didn’t break it over their knees. I don’t think anyone was pining for Sven to be playing in the NHL full-time when he was going 2 PPG in the WHL. The physical argument – i.e. that Monahan needs to play against big boys or that he needs to be in Calgary to develop physically – is essentially null in my mind.

However, in between getting destroyed and having his development harmed, Monahan actually did a lot of good work in terms of producing offense at even strength. 24/34 points were earned at even strength, which means that his 1.47 PTS/60 ranks him 172nd in the league last year. That’s a damn good result. The secondary assists are good too – but remember that the lack of sample size can go both ways. The team scoring percentage is a little lower than where we’d like it – but, remember, this guy is 19. I want to be clear, though: Monahan didn’t technically have a bad season. We know young guys struggle at the NHL level, so I’m not going to blame him for his poor underlying numbers and producing enough shots to score 14 goals on average in your first season isn’t anything to sneeze at.

I do want to touch on one thing that will invariably be brought up – his “low” on-ice SH%. Average in the NHL last year at 5v5 was 8.6% and Monahan’s was just shy of that at 8.5%. Now, this might suggest that the amount of points Monahan got was actually the correct amount. That’s probably true for his 24 even strength points, even though he had the 2nd best on-ice SH% of the Flames’ forwards. However, his 12.3% on the PP brings his overall SH% up to about 9.7%, or, about .8 percentage points higher than the overall average of 8.9%. Take away his extra six goals and we get an overall on-ice SH% of 8.7%, or, about average luck considering his team.

The following are facts and are not up for debate:

To me, those three essentially equal out – like a void, or something. If he had been an average shooter, there would be zero talk of him being too good to be in the OHL, full stop. Like I said above, though, it’s entirely possible that Monahan is a 15% shooter and he’ll be able to maintain that production. I’m just not willing to bet that he’s part of an exclusive group (0.7% of the players that played in the league this season were the same or better, 99.3% were worse) based off one season.

The reasons for these things? Something out of Monahan’s control. I’m not blaming him. But there was another option the Flames could’ve taken last year that would have benefitted the team economically, the player developmentally and the franchise as a whole. They ignored that path – even though many people said not to – and the end result is that they got lucky with a player shooting a lot better than he probably will in the future. Saying all of that, though, this kid has an uncanny ability to just be at the right place at the right time more than anyone I can recall seeing in a Flames uniform. He’ll just pop out of nowhere and do something amazing, and I think this has a little to do with his skating; which I believe was a little better than advertised.

As we reach the end, this profile seems negative, which I didn’t want – but that’s because the season he had was a negative one. It’s not his fault; most 19-year-olds don’t have good seasons at the top level. But the fact that he struggled so hard and we’ve still ranked him so high is a testament to how hard the NHL really is. I still believe that Monahan will be a first-line centre and a disappointing 19-year-old season in the NHL doesn’t do much to sway my opinion.

Click here for the full breakdown in image format (Wotherspoon and Reinhart are obviously backwards), and thanks for reading another year’s worth of rankings. We’ll be back next April, and happy draftsmas.