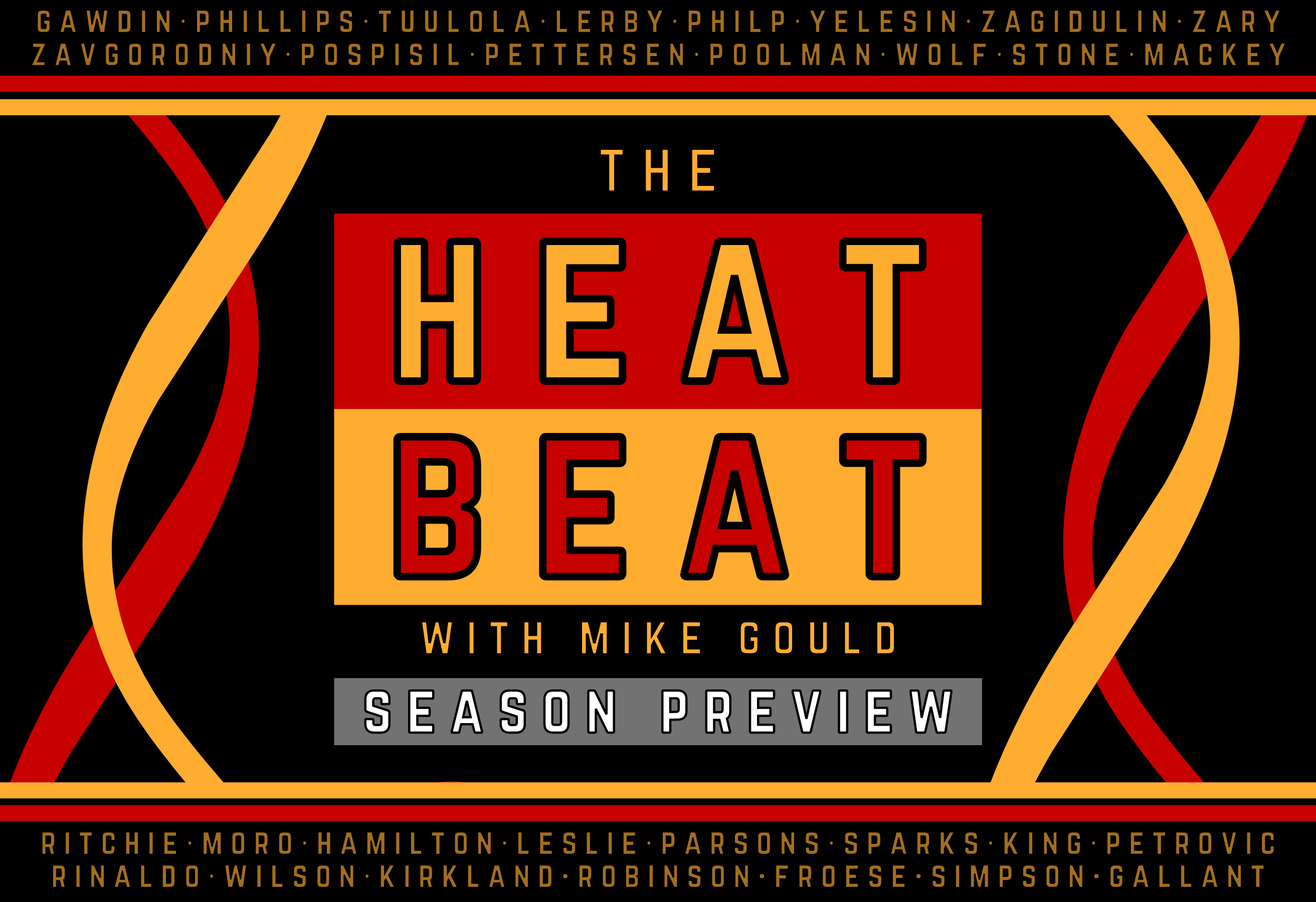 By Mike Gould
1 year ago
Welcome back to The Heat Beat, your source for all the latest news and insights on the Calgary Flames’ AHL affiliate.
As mentioned in the first part of our season preview, the Stockton Heat are set to play out of the Scotiabank Saddledome in Calgary for the 2020-21 AHL campaign.
The Heat are set to compete in the new AHL Canadian Division alongside the Toronto Marlies, Belleville Senators, Laval Rocket, and Manitoba Moose. They’ll open the 2020-21 season on Sunday, Feb. 21 with the first of a four-game set against the Marlies; beyond those matches, Stockton/Calgary’s schedule has yet to be unveiled.
Like their forwards, the Heat’s defense corps will undoubtedly borrow from the Flames’ current reserves during the season. Connor Mackey, Michael Stone, and Oliver Kylington have all occupied regular spots on the Flames’ taxi squad to this point and general manager Brad Treliving will likely want to give these players some regular game action to stay sharp.
The Heat have a lot of different options in goal. At least to start, Tyler Parsons will not be one of them: an ankle injury will prevent him from attending training camp and will likely keep him out for a decent chunk of the season. Artyom Zagidulin will return from last year’s roster and the highly-touted Dustin Wolf will look to make an impact in his first professional stint.

It might be easier to ask which defensemen won’t play for the Heat this year. Barring injury rehab stints, Mark Giordano, Rasmus Andersson, Noah Hanifin, Chris Tanev, Juuso Valimaki, and Nikita Nesterov all seem like safe bets to remain on the Flames’ NHL roster for the entire season.
With regulars Brandon Davidson, Rinat Valiev, Corey Schueneman, and Andrew Nielsen all gone from last year’s Heat defensive corps, some new faces will be relied upon to pick up some of the slack. Luckily, Treliving has spent much of the last two years bringing intriguing young defensemen into the fold for his organization, and many of them will make their North American professional debuts this year with the Heat.
Connor Mackey has already skated in two games this season with the Flames and will likely play big minutes for the Heat if and when he joins the roster. The 24-year-old defenseman racked up plenty of accolades during his three-year tenure as a Minnesota State Maverick, including being named to the Western Collegiate Hockey Association’s first all-star team in 2019-20.
Mackey is a 6’2″ left-handed defenseman with some offensive ability. TSN’s Frank Seravalli reported last March that 28 of the NHL’s 31 teams pursued Mackey as an undrafted free agent; he ultimately chose to sign a one-year entry-level contract with the Flames in that same month. It’s possible that Mackey could see time on both of Stockton’s special teams.
Russian right-handed rearguard Alexander Yelesin feels like a safe bet to skate next to Mackey on a potential top pair for the Heat. The Flames signed Yelesin in advance of the 2019-20 season and he made his North American professional debut that year with 38 games in Stockton and four in Calgary.
Yelesin is a no-nonsense defensive defenseman with limited offensive upside. He played reasonably well for the Flames last season, albeit in a small sample size, but he is already 25 and a pending restricted free agent. Listed at an even 6′ and 195 pounds, Yelesin will likely need to take a step or two this season to emerge as a viable potential replacement for the pending UFA Nikita Nesterov on the Flames’ blueline.
Carl-Johan Lerby is entering the second year of his two-year entry-level deal with Calgary; however, he spent the first season of that contract on assignment by the Flames to the Malmö Redhawks of the Swedish Hockey League. The Flames signed high-scoring defenseman Johannes Kinnvall to a nearly identical two-year deal this past off-season, with Kinnvall slated to arrive in North America in 2021-22 after playing a final year with the SHL’s HV71 Linköping.
Lerby is a 5’11” lefty with a history of effective two-way play, but it remains to be seen how his style will translate across the pond. He finished eighth on the Redhawks (and second among team defensemen) with 16 points in 44 games last season and was one of Malmö’s youngest players.
If Lerby is an unknown quantity, then Alex Petrovic is his opposite. The 28-year-old right-hander is a veteran of 263 NHL games with Florida and Edmonton and has solidified a reputation as a replacement-level NHL defenseman with little offensive upside. Petrovic spent all of 2019-20 with the AHL’s Providence Bruins and led all defensemen on the team with 20 points in 54 games.
It’s entirely possible that Petrovic supplants Yelesin on the Heat’s top pair. The two are only separated in age by three years and Petrovic has been in NHL circles for a very long time. Either way, Petrovic will almost certainly hold down a spot on the penalty-killing team.
Colton Poolman is the younger and shorter brother of the Jets’ Tucker Poolman. While Tucker shoots right, Colton is a lefty. Tucker is 6’2″ and 199 pounds, whereas Colton is listed as being 6′ and 200. The Flames’ Poolman signed with the team at the same time as Mackey but, at 25, is a year older and spent an additional year at college. Poolman enjoyed a successful four-year career at the University of North Dakota and, in 2019-20, was named a finalist for the National Collegiate Hockey Conference’s “Defensive Defenseman of the Year” award.
Poolman scored at a decent rate for the Fighting Hawks, topping out in 2017-18 with 29 points in 40 games, but it’s likely that his offensive side takes longer to manifest itself at the pro level. Poolman will likely fight with Lerby for playing time with the Heat; it seems likely that Poolman will see a fair share of time with the Heat playing a man down.
Rob Hamilton is not related to Dougie or Freddie; in fact, he’s not even on an NHL contract. Hamilton will return for a third year with the Heat after signing another AHL deal with the team this past off-season.
The 26-year-old Calgary product joined the Heat in 2018-19 and established himself as a capable offensive defenseman for the AHL, leading the team’s rearguards with nine power play points. The left-handed Hamilton has played 104 games for the Heat over the last two seasons, amassing 11 goals and 47 points during his tenure. As long as the Heat dress Mackey, Lerby, and Poolman simultaneously, it seems likely that Hamilton will occupy a spot on the right side.
Taking the above into consideration, here’s a look at some possible defensive pairings for the Heat in 2020-21: 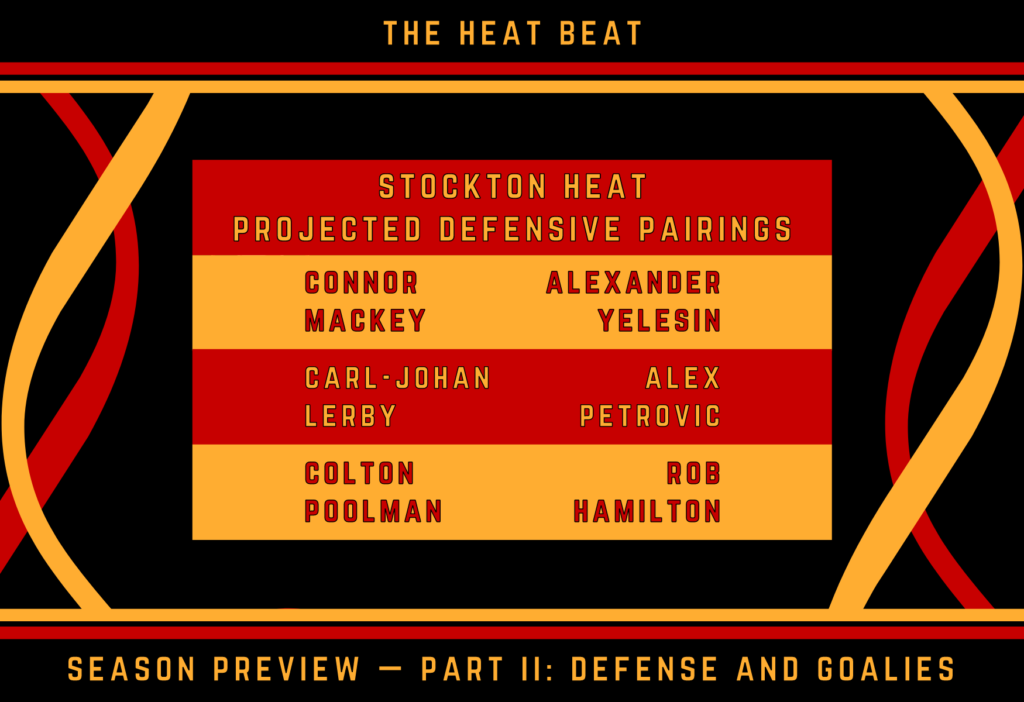 Projecting the top three defensive pairings for the 2020-21 Stockton Heat. Graphic by Mike Gould.
Who else could make appearances on defense for the Heat this season? Let’s take a look at some of their other options.

Constructing another crease in Calgary

Jacob Markstrom solidified the Flames’ goaltending situation when he signed a six-year, $36 million contract to come to Calgary. David Rittich is his de facto backup. Louis Domingue probably remains with the Flames—whether on the roster or the taxi squad—all season due to the NHL requiring teams to carry three goaltenders this season.
The Flames’ crease is set. The same cannot be said about Calgary’s newest team, which lost its previous starter (Jon Gillies) to free agency in the off-season and enters this year looking for any sort of consistency in goal.
Artyom Zagidulin posted an impressive 16-7-4 record for the Heat last year but his other numbers left something to be desired. His .898 save percentage and 3.07 goals-against average both ranked well below expectations and did little to foster any hope for an imminent NHL arrival.
Before coming to North America, Zagidulin spent the 2018-19 season with the KHL’s Metallug Magnitogorsk, going 12-7-3 with a .924 save percentage in 25 games. Zagidulin returned to the KHL earlier this season and played five more games in Magnitogorsk, posting a 1-3-0 record to go along with a disappointing .869 save percentage.
Zagidulin will presumably run tandem in Stockton with Garret Sparks, who the Heat signed last week to an AHL deal. Sparks, 27, is a veteran of 38 NHL games (14-18-2, .897 save percentage) but has spent the vast majority of his professional career in the AHL, most notably with the Toronto Marlies. Sparks was instrumental in helping the Marlies win the Calder Cup in 2018, posting a .915 save percentage in 19 playoff games.
After a disappointing stint as the Toronto Maple Leafs’ backup goaltender in 2018-19, Sparks was traded to the Vegas Golden Knights on Jul. 24, 2019. Sparks played in 26 games for the AHL’s Chicago Wolves in 2019-20, going 8-14-4 with a .908 SV%, and was not re-signed following the season. Earlier this year, Sparks played six games for the ECHL’s Orlando Solar Bears, winning four and recording a .928 SV%.
Finally, like Connor Zary, Dustin Wolf will spend the beginning of the year with the Heat while he waits for the WHL season to begin. Wolf is one of the Flames’ top prospects and has been a dominant figure in the Everett Silvertips’ crease over the last three seasons, winning 88 out of 127 games and recording .928, .936, and .935 save percentages in those campaigns.
Carter Hart’s former backup, Wolf was taken 214th overall by the Flames in the 2019 Draft and proceeded to be named the Goaltender of the Year for the entire Canadian Hockey League in 2019-20. Wolf was the 22nd goaltender selected in the 2019 Draft and the sixth to be drafted out of the CHL. His 6′ stature, unusually short for a goaltender, did not prevent him from being named to the United States’ U20 World Junior team in 2020: Wolf faced 21 shots over two games at the WJC, made 21 saves, earned one shutout, and received a gold medal with Team USA. Now 19 (and set to turn 20 in April), Wolf will soon return for his fourth campaign with Everett but will likely get his first taste of professional hockey in the meantime.
These three goaltenders will likely battle for time in Stockton’s crease to begin the 2020-21 season: 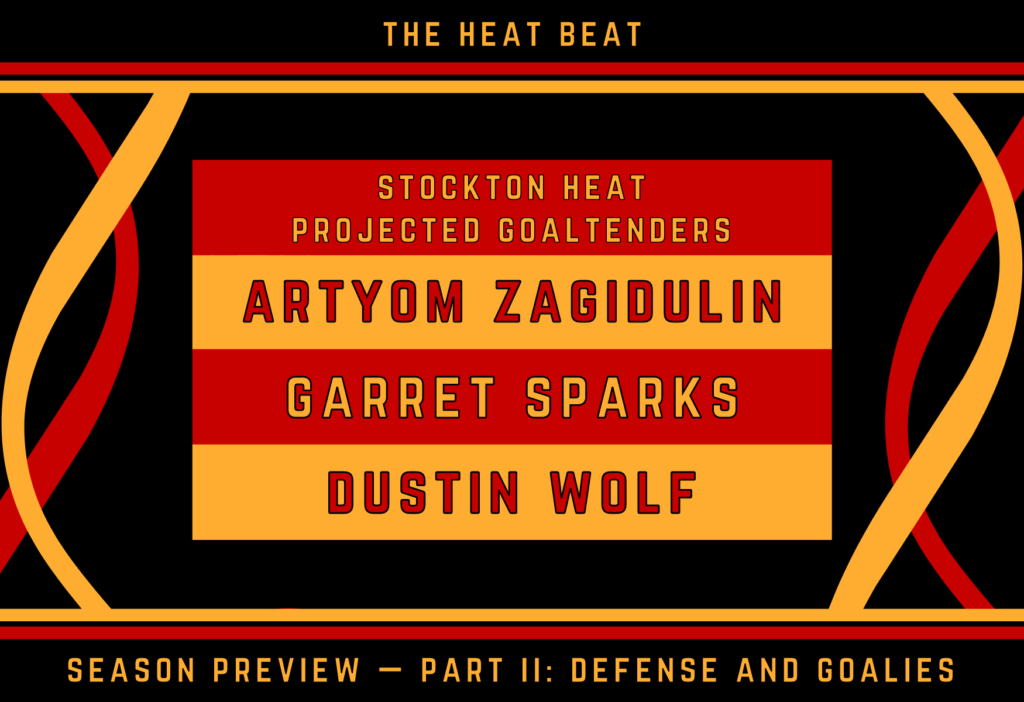 Projecting the Stockton Heat’s goaltending hierarchy to begin the 2020-21 season. Graphic by Mike Gould.
Beyond these three players, the Heat might have some other options to play in net for them this season.
Stay informed with all the latest Heat Beat updates on Twitter.
Uncategorized
Recent articles from Mike Gould