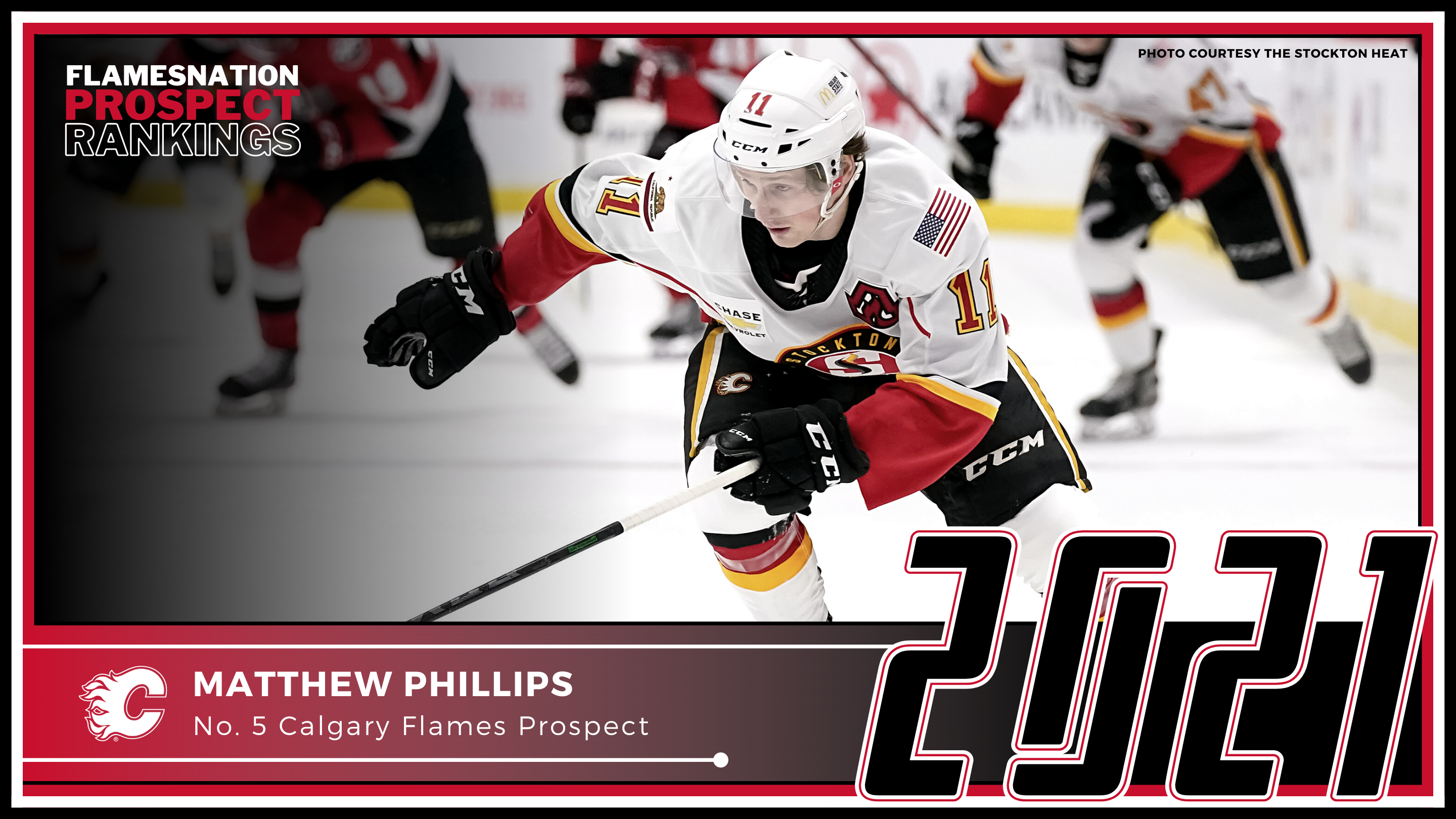 By Paige Siewert
1 year ago
Perhaps one of the most anticipated NHL debuts for Calgary last year, Matthew Phillips is practically a household name among Flames prospect followers who continue to push for his fair shot with the Flames.
The FlamesNation crew also sees his untapped potential and ranked him fifth in our 2021 Prospect Rankings. Phillips is always the nicest guy in the room and even when he is not lighting it up on the scoresheet, he is finding ways to help his team from a leadership and effort standpoint. Regardless of the score or the recent game record for the Stockton Heat, Matthew Phillips was one of those players you could expect to show up and give it his all.
Matthew Phillips
Right-Handed forward
Born April 6, 1998 (Age 23) in Calgary, Alberta
5’7,” 155 pounds
Drafted in the sixth round (166th overall) by CGY in 2016
Matthew Phillips is a nifty playmaker that seems to make things happen on the rush regardless of who is on a line with him. He spent some time skating with Adam Ruzicka and Connor Zary to start the season and rotated around some other linemates later in the season such as Dmitry Zavgorodniy, Luke Philp, and Giorgio Estephan. You may frown at his height, but he does not show it on the ice. He can take a hit and even deal one out here and there. Video proof below.
The appeal around Phillips is not just because the Flames have had success with small, quick forwards *cough* Johnny Gaudreau *cough,* but also because he is a good old Alberta-raised hockey player. Phillips grew up in Calgary and played AAA hockey for the Calgary Buffaloes and Calgary Bisons growing up before getting picked up by the Victoria Royals for his junior career.
Phillips put up insane numbers in his junior career earning 76 points in 72 games in his first full season, 90 points in 70 games in his sophomore season, and 112 points in 72 games in his final season when he was the Captain of the team.
It wasn’t until the 2016-17 season that Phillips got his professional debut and first point for the Heat in the same night. He has amassed 91 additional points for the Californian Flames affiliate since then. Phillips was a part of the developmental era that included Dillon Dube, Andrew Mangiapane, and Juuso Valimacki before they made their full-time jump to the Flames.
As Phillips enters his fourth full season with the Stockton Heat, you can see the foundational player he is on this team and in this organization. The Stockton Heat is not the Stockton Heat without Matthew Phillips. In his first season in 2018-19, Phillips definitely got his feet wet in the league with 13 goals and 25 assists for a total of 38 points in 65 games.
In the 2019-20 season, Phillips played at an even better pace. He earned 15 goals and 18 assists for a total 33 points. He did not get a full season in as he ended up missing six weeks due to a fractured kneecap. Something that did not seem to bother him or slow him down going into the 2020-21 season.
Phillips tied Adam Ruzicka at the top of the team scoring last season putting up eight goals and 13 assists in 30 games. He would be the last person to brag about it too. When the pressure was on the Flames to accept their fate at the end of the season and get some younger guys in the lineup, Phillips kept himself disconnected from that conversation. In post-game media scrums, Phillips was just happy to be playing where he could be and was letting the opportunities come as they did. He was happy to see his linemate, Adam Ruzicka get his chances up with the Flames and enjoyed the idea of joining him up there.
His hopes ended up coming to fruition as Matthew Phillips finally earned his NHL debut against the Vancouver Canucks on May 19th against the Vancouver Canucks on a line with Ruzicka and Milan Lucic. If they seemed to click well, it was no coincidence as him and Ruzicka had been feeding each other pucks for months prior. Phillips even came within inches of his first NHL goal as he was positioned at the open net and flared on his shot. Phillips was all smiles that day and he had some promising reflections to share with Flames media following that game.

It was such an awesome day. But that being said, I hope I can push to have a lot more days like that ahead of me.

Phillips is another forward that can throw his name in the hat as a potential semi-regular NHL regular this season. As it stands now, the Flames have room towards the bottom of their lineup to fill in their up and coming forwards from their farm team. Phillips definitely deserves more looks at the NHL level than what have been given up until this point or he could be hard to hold onto going forward. Some fans and members of the media were even worried he may have been an appealing option for Seattle in the expansion draft, but clearly, Mark Giordano was the more obvious choice.
Phillips has not shown any indications that he cannot keep up at the NHL level, but there is something holding the coaching staff back. He will attend Flames training camp alongside some of his other Heat teammates on the cusp of the NHL roster and will very likely keep up his consistent play and put on a good showing for himself. He may not crack the opening night roster for the Flames but he should be around the top of the Flames call sheet when it comes to pulling players from Stockton in the upcoming season.