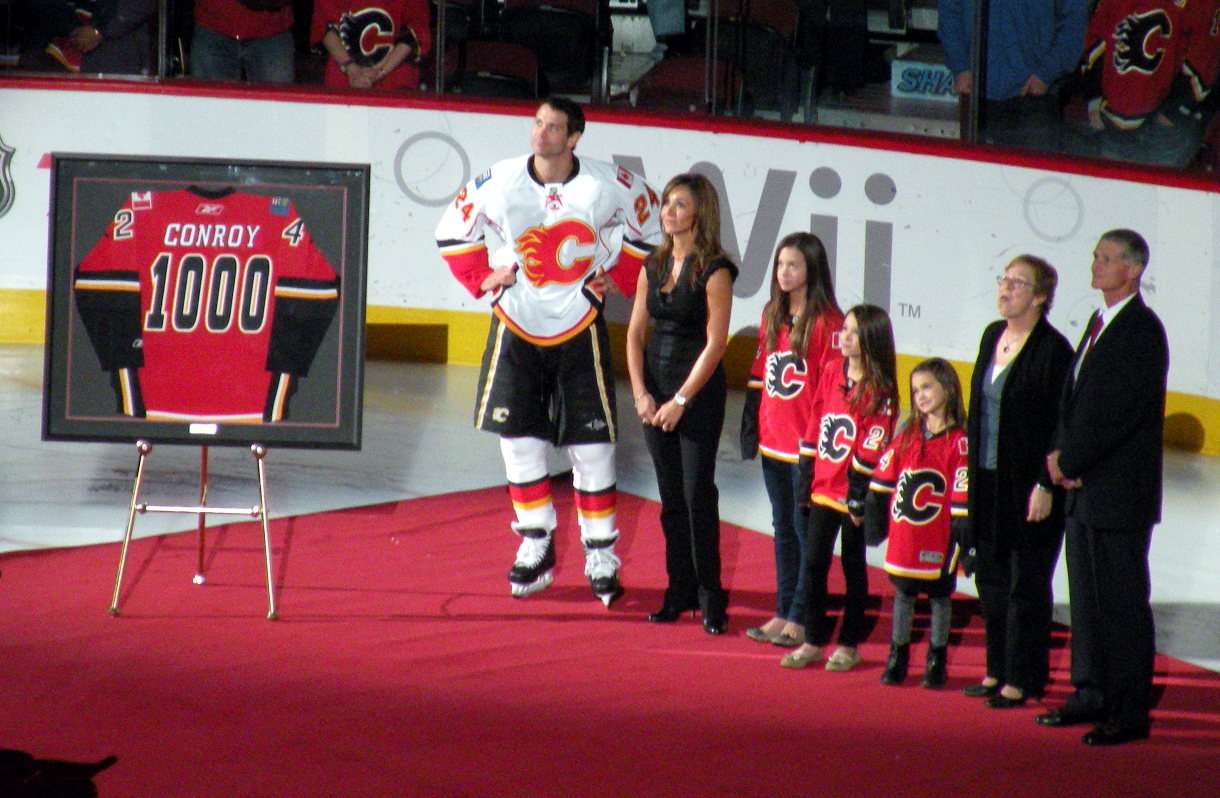 By Pat Steinberg
1 year ago
“I just thought: you know what, what’s the one thing you can’t buy, you have to earn it, and you can only do if you’re in the NHL?” Ten years after first asking himself that question, Flames assistant general manager Craig Conroy remains driven by the same thing he chased for more than 1,000 games on the ice: a Stanley Cup.
Now with a decade of front office experience to his name, Conroy is in an interesting spot. More than anything, he wants to win a Cup in Calgary, his adopted home for the better part of two decades. But Conroy is also a new, bright mind in the management world who has already gone through the GM hiring process once. With a growing resume, you can expect to hear Conroy’s name connected to future openings around the league.

Conroy officially retired on Feb. 4, 2011, around six weeks after his last game, which was Dec. 20, 2010 in Minnesota. Then 39, Conroy was being used in a limited, albeit effective, role when playing. Even still, he had started to explore opportunities after hockey, and the offers were there.
Conroy was offered a coaching job at his alma mater Clarkson University and was a hot commodity in the broadcasting world, for obvious reasons. But it was an offer from the late Ken King, then Calgary’s president and CEO, that won the day. Immediately upon announcing his retirement, Conroy started his first job post-retirement as special assistant to acting general manager Jay Feaster.
“In the end, the goal has always been the same: it’s to win a Stanley Cup,” Conroy told me when I chatted with him last week. “That’s the one thing you can’t do in the other jobs that I had an opportunity to explore.”
There was no dipping a toe into the water for Conroy. Instead, he was thrown right into the fire and immediately started learning the ins and outs of his new career. Conroy was immediately on flights across North America and Europe trying to get a handle on the finer points of scouting, player evaluation, and procurement.
“I think (late Flames amateur scout) Tom Webster really helped me along and so did (director of amateur scouting) Tod Button,” Conroy said. “What exactly am I looking for? How many players should I be doing in a game? I can’t do all 40! And they’re like: no, you can’t do all 40, you have to key on certain guys. They just started to explain how we have to go about it.
“It was a whirlwind. Actually, Ron Sutter and I got to do some development, too. Ronny was amazing with me to start, bringing me down to Abbotsford and showing me around. And (then Abbotsford Heat head coach) Jimmy Playfair was down there, and that really helped having Jimmy down there. To be able to kind of work with him and see what’s going on on the coach’s side. He was very inclusive.”

Conroy served as special assistant with Jay Feaster and Brian Burke in their tenures as general manager before being promoted to assistant GM with Brad Treliving in June 2014. Over those 10 years, he’s done a little bit of everything from the business side, to scouting, and running Calgary’s AHL affiliate for a season. Now in their seventh season working side by side, Treliving has identified where Conroy’s strengths fit best in his management model.
“I do college free agents, junior free agents, the draft,” Conroy said. “I get to work with Tod and his staff. I probably do about 35 to 40 of the top guys that we like. Really get in there and see those guys, which is fun. And that’s how you make your biggest, kind of strides in the organization. On the pro side, I get to do free agency and work with our (professional scouts).”
Well, this management group has excelled in many of those areas. The last five or six years have been among the best drafts in organizational history. Calgary’s work with undrafted free agents has been strong, too, with Connor Mackey the latest promising addition to a list that also includes Josh Jooris, Garnet Hathaway, and David Rittich. While Conroy hasn’t been solely responsible for these successes, it’s fair to say he has been a big part of it.
Yet, even a full decade into management, Conroy is still learning on the fly. Take a moment on a road trip earlier this season, for instance. After a tough night for Juuso Valimaki in Montreal, Conroy made a point to sit down and chat with the promising rookie defenceman who was noticeably feeling down about his performance.
“I go: that stuff will happen Vali! I remember a game where I was -5 in San Jose. It’s not fun, but we’ve got to let it go, you know? And he’s like…well are you guys mad at me? I’m like…mad? No we’re not mad. So you try to make guys feel comfortable. You’ve been there, you’ve done it, and to put them in a spot where they feel at ease and that they’re not overthinking.
“They should just be thinking about their game, they shouldn’t care what we think. You forget young guys do care what you think, they care about coaches, and we’re all in this very tight bubble that they can’t from us. It was a good lesson for me, you’re always learning, and that was a good thing. I was just thinking…maybe I should have talked to him earlier. I didn’t think about it. I’ve got to do a little bit more of that, because there are times when you get upset and you’ve got to figure out what’s going on with players.”

Conroy has already gotten a taste of the GM interview process after being a finalist for an open gig in Buffalo in 2017. While the job ultimately went to Jason Botterill, it gave Conroy a taste of how close he might be to taking the next step on the career ladder.
“In the end, it’s like Brian Burke always told me: Craig, either you want to be on the bus or you want to drive the bus,” Conroy admitted. “I think that’s always been my personality. No one ever said I was going to play in the NHL, I got to play 1,000 games. Every time I’ve been challenged…it’s just something that drives me. The end goal is to be an NHL GM and win Stanley Cups, build something special, an exciting team that people can be proud of. That’s got to be the goal for me.”
It’s an interesting balance to strike. On the one hand, Conroy wouldn’t be who he is if the chance for more responsibility and a bigger challenge didn’t motivate him. It’s just how he’s wired. It’s also how Conroy went from a 1990 sixth round pick to being a two-time Selke Trophy finalist en route to 1,009 NHL games.
At the same time, Calgary is home for the Conroy family and has been for a long time. As a player, Conroy spent more than half his career with the Flames and they’re the organization that helped him transition to his current career. There’s a unique connection between Conroy and the fans in this city, which would be hard to replicate somewhere else.
“In the end, Brad (Treliving) gets to make that final call. You put all your recommendations forward, he’s amazing, you know, he lets you give your opinion. But in the end, he makes that call. One day, that’s what I want to do, I want to make that call. Do I want to leave Calgary? Absolutely not, I love it. My goal has always been to win a Stanley Cup in Calgary.”
When you think about it, it’s not the worst spot to be in. For now, Conroy is an integral part of an organization that initially acquired him nearly 20 years ago and lives in a city where he’ll be posing for pictures in perpetuity. Simultaneously, Conroy continues to build an impressive management resume for when doors open in the future.
You can bet if/when the opportunity arises, and if Conroy decides to leave, he’ll be ready for his new challenge. I’m not sure Conroy saw that coming 10 years ago when his playing career transitioned to his management career in the blink of an eye. It seems like the last decade has gone by for Conroy just as quickly.