A country-by-country breakdown of the Flames’ Olympic hopefuls 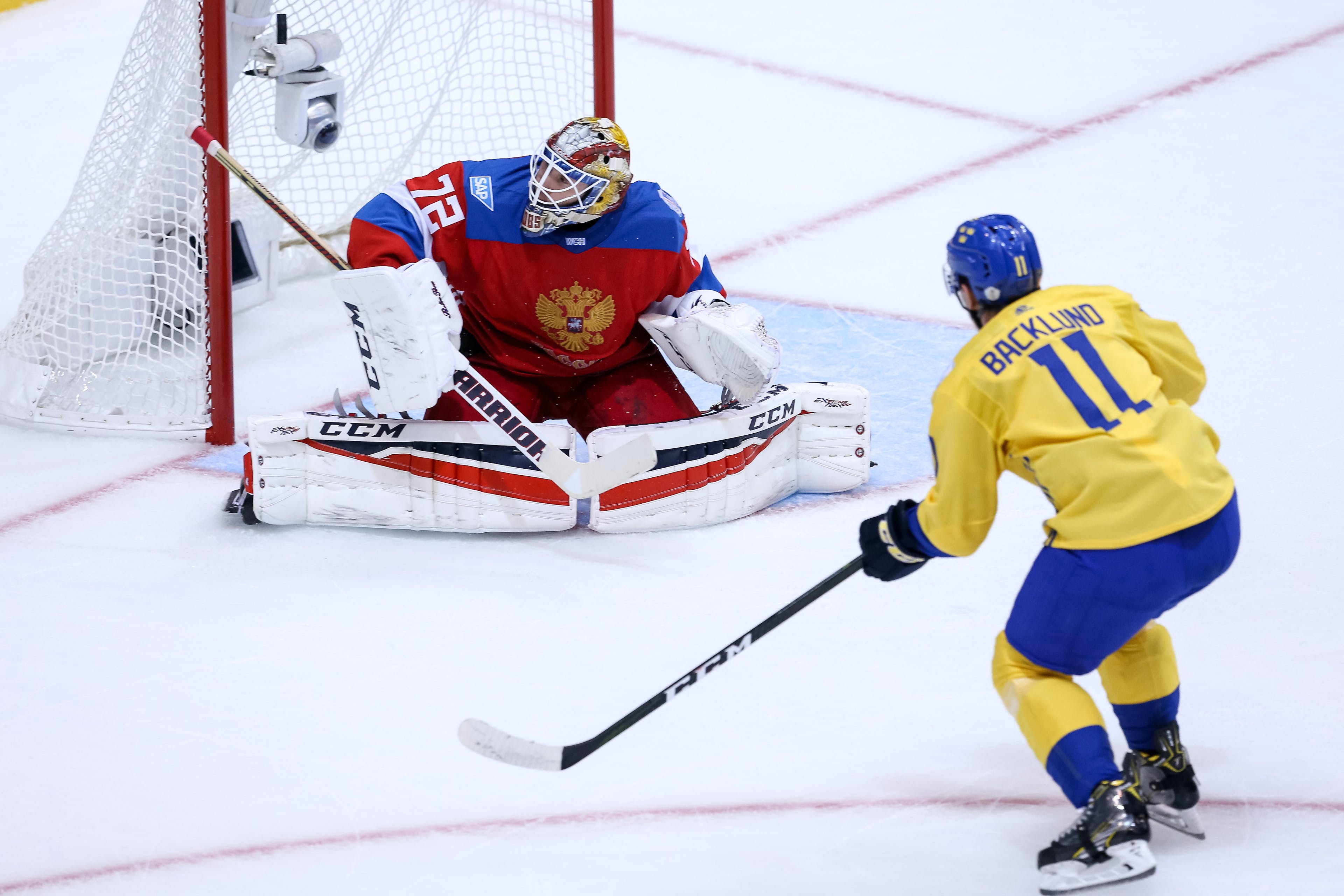 By Mike Gould
1 year ago
Twelve nations have been selected to participate in the men’s ice hockey tournament at the 2022 Olympic Winter Games in Beijing.
While some Canadian politicians have argued in favour of boycotting the Olympics as a form of protest against China’s human rights record, it currently appears Sidney Crosby and co. will attend in pursuit of extending Canada’s medal streak. Many American onlookers have expressed similar concerns about the Beijing games.
At this point, it’s unclear whether the 12 qualifying countries for the men’s ice hockey tournament will all be represented at the 2022 Olympics. Six months remain until the opening ceremony, which is currently scheduled to take place on Feb. 4, 2022.
The NHL released its 2021–22 schedule in July. Its current iteration includes a two-week break, from Feb. 7 to 22, for NHL players to attend the Beijing Olympics. If the NHL ultimately opts against attending the games, a revised schedule—without the break—will be released. The league’s final decision about the 2022 Olympics is expected this week.
While we wait for the dust to settle, let’s take a look at which Flames players would be the most likely to feature in an NHL-backed 2022 Olympics.

As the host country, China automatically received a spot in both ice hockey competitions.
While the Flames do not currently have any Chinese-born players, Spencer Foo has a chance to play for China at the 2022 Olympics. The 27-year-old forward, who was born in St. Albert, AB and is of Chinese descent, played four games for the Flames in 2017–18. Foo signed with Kunlun Red Star, the KHL’s Chinese team, in 2019; his exclusive NHL signing rights with Calgary expired this past May.

The Flames do not currently have any German, Latvian, Danish, or Swiss players on their roster or reserve list.

Only nine Slovak skaters appeared in NHL games last season. Among them, one played for the Calgary Flames: Adam Ruzicka, a big 22-year-old centre who is our No. 6-ranked Flames prospect.
Ruzicka represented Slovakia in the qualifying tournament for the 2022 Olympics. While he likely won’t slot in as the team’s No. 2 centre—as he did in the qualifiers—next February, there’s a pretty good chance Ruzicka will travel to Beijing as an Olympian.
Martin Pospisil has an outside chance to play for Slovakia next year. He missed the second half of the 2021–22 AHL season after suffering a knee injury and undergoing shoulder surgery; nevertheless, he was very productive in his 14 games and offers an intriguing blend of physicality and skill. If he makes the Olympic team, it’ll likely be as a depth winger.

Five Czech goaltenders participated in NHL games last year. Of them, Vitek Vanecek, Petr Mrazek, and former Flame David Rittich appear the most likely to represent the Czech Republic at the 2022 Olympics.
If the injury bug bites, the Czechs could look to Dan Vladar as a replacement for one of those three. He and Josef Korenar were the only other two goaltenders to play NHL games in 2020–21 but, while Korenar has a .901 career save percentage in 75 AHL games, Vladar is four months older and has a .917 in 78 AHL contests. Neither has much of a history in the NHL but Vladar appears primed to serve as Jacob Markstrom’s full-time backup in 2021–22.

With all due respect to Ilya Nikolayev, Yan Kuznetsov, Arsenii Sergeyev, Daniil Chechelev, and Dmitry Zavgorodniy, the Flames only have one player with a legitimate chance to suit up in the Russian Olympic Committee uniform at the 2022 Olympics: Nikita Zadorov.
Today’s NHL boasts plenty of high-scoring Russian-born forwards, from Alex Ovechkin to Evgeni Malkin to Artemi Panarin to Kirill Kaprizov. Conversely, Russia’s crop of NHL defencemen features the odd gem but sorely lacks depth.
Mikhail Sergachev, Dmitry Orlov, and Ivan Provorov will likely form the better half of Russia’s top-six on the back-end. With five spots remaining on defence, Russia will be able to pick from a field that includes Artem Zub, Vladislav Gavrikov, Nikita Zaitsev, Zadorov, Dmitry Kulikov, Alexander Romanov, Nikolai Knyzhov, and a slew of KHL players (led by former Flame and 2018 gold medallist Nikita Nesterov).
Zadorov offers physicality and shutdown ability at the expense of offence and speed. Depending on the philosophy set forth by those presiding at the ROC, players like Zadorov, Kulikov, and Nesterov could receive spots on the 2022 team over Romanov and Knyzhov due to experience and their coaches’ willingness to give them big, difficult minutes.

Even at his young age, Juuso Valimaki has a decent chance to play for Finland at the 2022 Olympics. Valimaki, who will turn 23 next month, ranked fourth among Finnish defencemen with 49 NHL games played in 2020–21. Among the 12 Finnish rearguards who appeared in at least 20 games last season, Valimaki ranked 10th with an average of 15:26 of ice-time per game.
Miro Heiskanen is a lock to make it. Esa Lindell and Rasmus Ristolainen are probably safe bets, too. Beyond that, it’s a lot of “maybe.” Olli Maatta has been around the block a few times but he only averaged 16:26 in his 41 games with the L.A. Kings last season. Sami Vatanen is an old standby from the 2014 Olympics but he doesn’t have an NHL team at the moment. Markus Nutivaara has seen his usage plummet over the last two seasons.
Henri Jokiharju, Olli Juolevi, Urho Vaakanainen, and Ville Heinola are all basically in Valimaki’s boat, age-wise, although the latter three all played much less than the young Flame did in 2020–21. Jani Hakanpaa, Niko Mikkola, and Mikko Lehtonen are all much older but only debuted as full-time NHLers last season. Juuso Riikola has been effective in the past but missed much of last year while injured and as a scratch. There’s also a bunch of guys in the mix from the Liiga and the KHL, including Robin Salo and Oliwer Kaski.
For now, let’s pencil in Heiskanen, Lindell, Ristolainen, Maatta, Jokiharju, Valimaki, Hakanpaa, and Vatanen.

The Flames will likely send a healthy Swedish contingent to the 2022 games. Barring any major surprises, Jacob Markstrom, Elias Lindholm, and Mikael Backlund should all don the Tre Kronor next year in Beijing.
Markstrom appeared in more than twice as many NHL games last season as any other Swedish goaltender. Robin Lehner and Linus Ullmark will likely also make the team but Markstrom has a chance to put his stamp on the starting role with a strong start to the 2021–22 season.
Lindholm’s versatility should allow him to occupy a top-six role either at centre or on the wing; Backlund’s defensive reputation will likely be the factor to push him ahead of forwards with similar production. Among Swedish NHL forwards, Lindholm ranked fourth with 47 points in 2020–21; Backlund placed 11th with 32.
In keeping with past Olympics, Sweden will presumably send 14 forwards to the 2022 games. From this vantage point, the most likely 14 forwards to make the team are Elias Pettersson, Mika Zibanejad, Gabriel Landeskog, Filip Forsberg, Nicklas Backstrom, Lindholm, William Nylander, William Karlsson, Backlund, Rickard Rakell, Joel Eriksson Ek, Andre Burakovsky, Viktor Arvidsson, and Calle Jarnkrok, with Patric Hornqvist, Victor Olofsson, Jesper Bratt and Jakob Silfverberg also making sense as candidates.
Even if he bounces back from his disappointing 2020–21 season, Rasmus Andersson is unlikely to be a candidate on defence. It’ll be difficult for him to supplant the likes of Victor Hedman, Jonas Brodin, Mattias Ekholm, John Klingberg, Erik Karlsson, Rasmus Dahlin, Adam Larsson, and Hampus Lindholm, or even old standbys like Oliver Ekman-Larsson and Alex Edler. There’s a small chance Andersson could sneak in as a reserve if injuries hit, but only if he experiences a massive resurgence.

Johnny Gaudreau. Matthew Tkachuk. Enough said.
Regardless of whether these two remain Flames next February, they’ll almost certainly be on Team USA if they’re healthy. They’re two of the most skilled offensive wingers in the NHL, with both of them regularly ranking among the top-scoring American-born players in the league.
Beyond those two, it’s hard to imagine any other U.S.-born Flames travelling to Beijing next year. Noah Hanifin is probably next on the Flames’ hierarchy of American players but it’s very difficult to imagine him beating out Jaccob Slavin, Quinn Hughes, Ryan McDonagh, Zach Werenski, Cam Fowler, Torey Krug, and Ryan Suter on the left side.
One more thing … should Jack Eichel become a Flame (and recover from his neck injury) in advance of the 2022 Olympics, you’d be safe to bet on him representing the States in Beijing.

The Flames haven’t been represented on Team Canada since Jarome Iginla set up Sidney Crosby’s iconic Golden Goal at Vancouver 2010.
Had NHL players attended the 2018 games in Pyeongchang, Mark Giordano would’ve stood a pretty good chance to make his Olympic debut. Sean Monahan might’ve had an outside chance to crack the roster. Instead, the NHL pulled out of the games, paving the way for the Gilbert Brules and Rene Bourques of the hockey world to don the maple leaf.
As we near the 2022 games, much has changed. Giordano is no longer a Flame and, at this point, is unlikely to merit much consideration. Monahan has taken multiple steps backward and is no longer close to being a viable candidate.
Chris Tanev and Andrew Mangiapane are good players. Are they Olympians? Probably not for Canada, which has so much depth to choose from. It might be a different story if Tanev shot left—Canada is notoriously thin on left-handed defenders—but instead, he’ll be competing against the likes of Cale Makar, Dougie Hamilton, Kris Letang, Drew Doughty, Aaron Ekblad, Jared Spurgeon, Ryan Ellis, Ryan Pulock, Alex Pietrangelo, MacKenzie Weegar, and Colton Parayko. With all due respect to Tanev, he’d be in tough to crack Canada’s “B” team.
Mangiapane is an excellent two-way winger who appears primed to take another step in his development. Canada doesn’t have a ton of high-scoring natural wingers—Mangiapane ranked 18th among them last season with 32 points—but they have a ton of centres who could slide over onto one of the flanks. It wouldn’t be surprising to see Hockey Canada elect to bring 10 centres to Beijing and use half of them as wingers. Either way, Mangiapane is very unlikely to make the cut.
Here’s the list of the current Flames players who we feel are more than 50% likely to play for their respective countries at the 2022 Olympics:
Slovakia: Adam Ruzicka
ROC: Nikita Zadorov
Finland: Juuso Valimaki
Sweden: Jacob Markstrom, Elias Lindholm, Mikael Backlund
United States: Johnny Gaudreau, Matthew Tkachuk
Uncategorized
Recent articles from Mike Gould