A look ahead to 2021’s new entry level faces 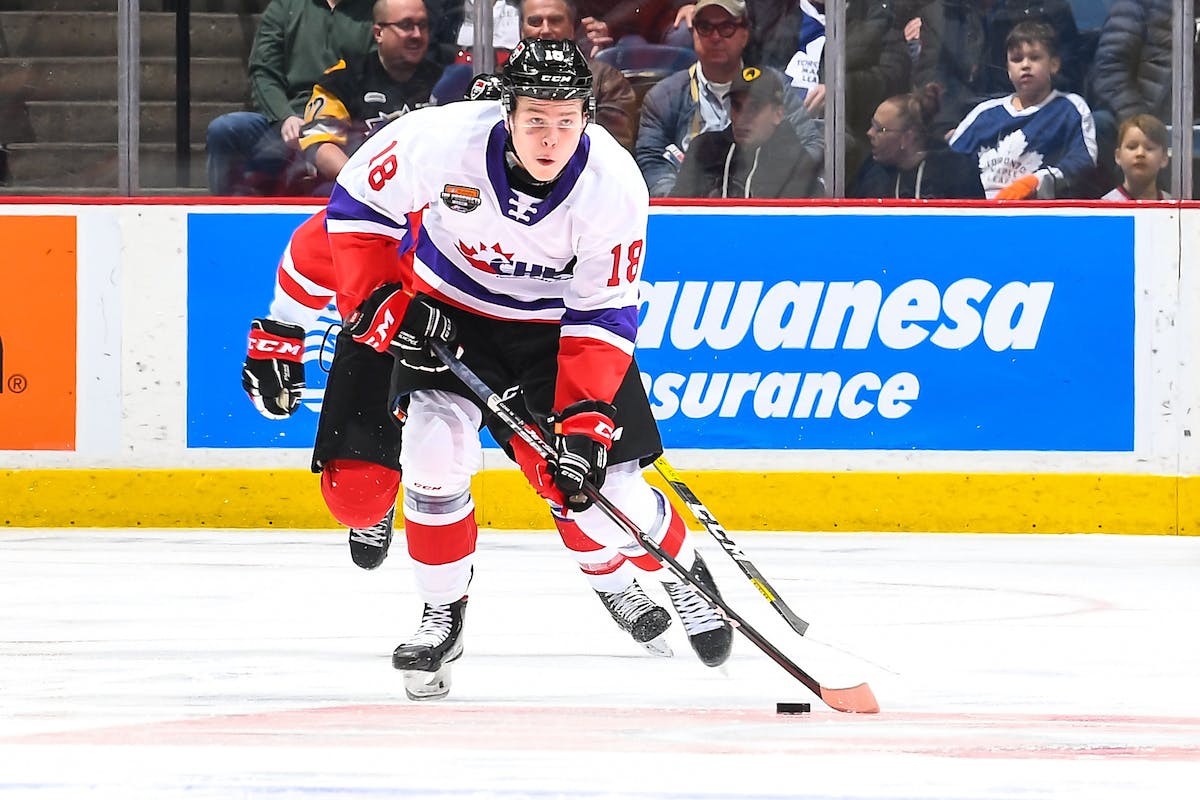 By Ryan Pike
1 year ago
The Calgary Flames aren’t doing amazingly right now, but many of their prospects are having excellent seasons at other levels of hockey. Six prospects seem poised to turn pro and potentially provide the Flames with some excitement in 2021-22.
Here’s a snapshot of some 2021-22 new faces on entry-level contracts.

Who? Calgary’s seventh round pick in the 2019 NHL Draft.
What? He’s a goalie! A pretty good one, too. Currently with the WHL’s Everett Silvertips, he’s nearing the WHL’s all-time shutouts record. He won a gold medal as the backup goalie for Team USA at the most recent World Juniors.
How? Wolf is signed to an ELC that kicks in next season. He’ll probably spend a season in Stockton before factoring into NHL plans in any way.

Who? Calgary’s second round pick in the 2020 NHL Draft.
What? He’s a left shot Russian defenseman who just finished two years in the NCAA. He was one of the youngest players in NCAA hockey as a freshman and played at the World Juniors this season. (He’s young enough that he can play in next year’s World Juniors, too.) He projects more as a shutdown guy, but he’s not an offensive slouch.
How? Kuznetsov signed his ELC, so he’s bound for the pros. He won’t turn 20 until March of next season, so he’ll be one of the youngest players in the AHL next season.

Who? An undrafted free agent signing from Sweden.
What? He’s a right shot Swedish defenseman who has dazzled offensively in the SHL over the past few seasons. The Flames signed him last summer but allowed him to stay in Sweden on loan for a year. He’s a power play specialist (of sorts) in Sweden, so he might need either seasoning in the AHL or to be paired with a strong defensive player. (He and Kuznetsov could be fun together.)
How? Again, he’s already under contract, and he’s headed over here in the fall.

Who? Calgary’s fifth round pick in the 2020 NHL Draft.
What? The pride of Beaver Bank, Nova Scotia – a Halifax suburb – Francis is small (5’9″, 170) but quite good. He moves the puck well and has a great motor, and the only thing scouts seemed iffy on was his consistency. He’s among the top offensive players in the QMJHL this season.
How? He still needs an ELC, but that probably won’t be an issue. As a 2001 birthday, he can step right into the AHL in the fall.

Who? Calgary’s first round pick in the 2020 NHL Draft.
What? A Saskatoon product, Zary was one of the top players in the WHL last season. After being drafted and signing his ELC, he played a few games for Stockton and looked quite good. He’s currently captain of the Kamloops Blazers, the team co-owned by Flames legend Jarome Iginla, and is off to a strong start to the WHL season. He has a silver medal from the recent World Juniors. He’s a very balanced 200-foot centre who can play in basically any situation.
How? He has an ELC already and seems ready to go pro already, especially based on his performance in Stockton.

Who? Calgary’s first round pick in the 2019 NHL Draft.
What? A Quebec City kid, Pelletier has been one of the top players in the QMJHL for the past few seasons. He’s currently in his fourth season scoring more than a point-per-game in the Q. He captains the Val-d’Or Foreurs, one of the top Q teams, and he has a silver medal from the World Juniors. He’s a superb two-way player who’s not big – listed at 5’9″, 165 – but he plays a fearless game that combines speed, tenacity and skill.
How? He’s already signed and has definitely out-grown the QMJHL.
Uncategorized
Recent articles from Ryan Pike