Beyond the Boxscore: Calgary Flames fail to score on chances in loss to Boston Bruins 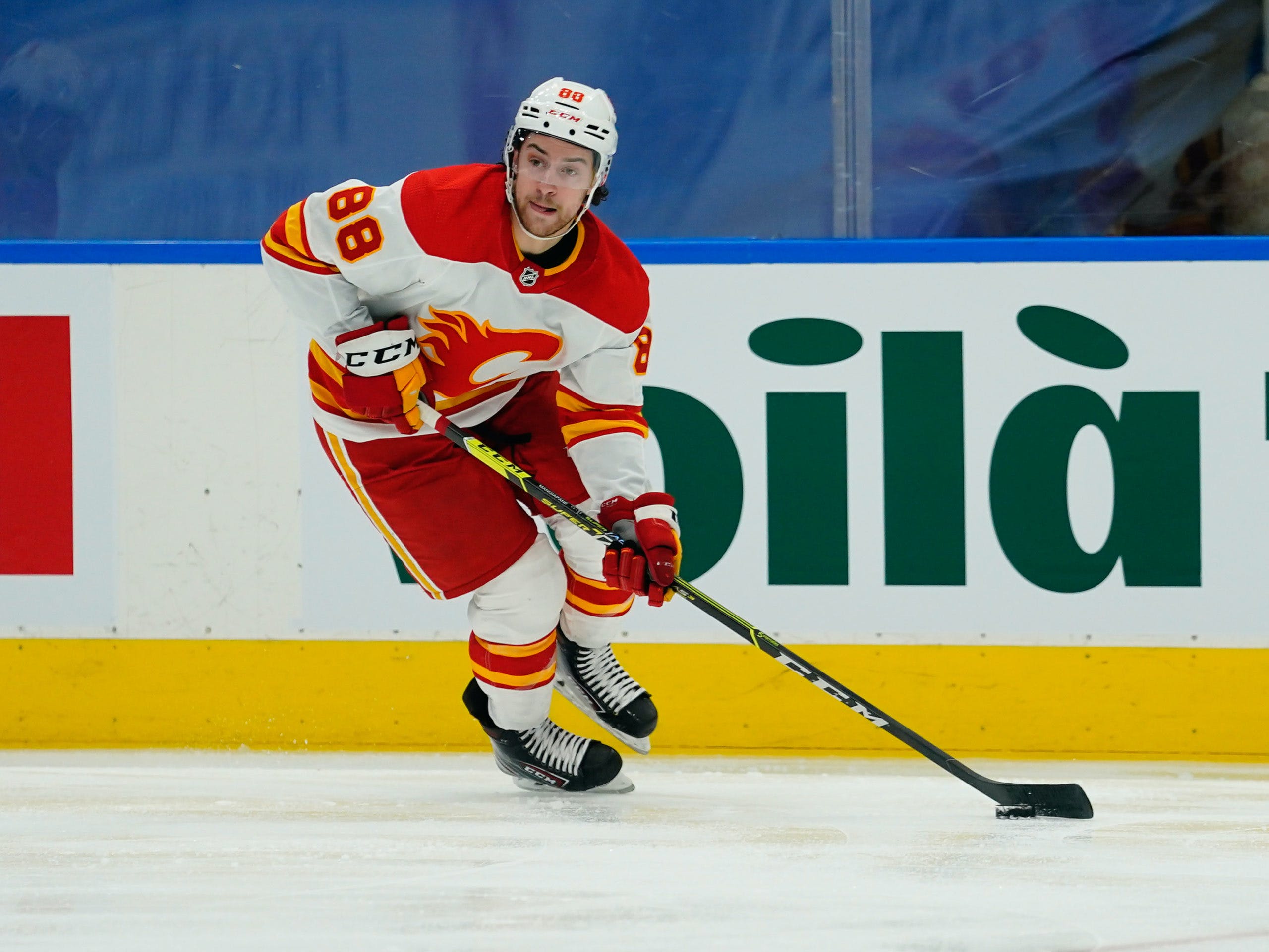 By Shane Stevenson
11 months ago
There is a very serious difference between regular 5v5 metrics and metrics that are adjusted based on score & venue. The SVA numbers adjust for home ice bias, and both leading & trailing score effects. NaturalStatTrick uses a model created by HockeyViz.com creator Micah Blake McCurdy. I preface with all of this information before I present both sets of numbers, because they do indeed tell two different stories of the Calgary Flames’ loss to the Boston Bruins on Saturday night.
5v5: CF% – 61.96%, SCF% – 62.22%, HDCF% – 52.38%, xGF% – 52.21%
5v5 (SVA): CF% – 56.19%, SCF% – 57.06%, HDCF% – 46.03%, xGF% – 46.45%
It’s a Team Game – When taking out the bias and adding in the score effects from trailing and Calgary was not as *ahead* of the Bruins as some suggest. Overall, I do think they were playing well, but got buried in a multi-goal deficit thanks to a bad goal and an unreal deflection. I like to compare SVA statistics because in theory it takes all teams back to equal regardless of the city being played in. In saying that – by SVA metrics the Flames id lose the high danger battle. Raw numbers saw them win high-danger chances 11-10, now everyone at home can judge whichever numbers they so choose but what strikes me as most concerning is even on 9.49 or 11 chances, they only got 2 goals by the goaltender.
Corsi King – It made absolute sense to have Andrew Mangiapane (87.38 CF%) out with the goalie pulled. Backlund (83.49%) went up against the Bruins second line tonight while Elias Lindholm (47.49%) got the perfection line. The Flames bottom D pair enjoyed playing against a Bruins bottom 6 that wasn’t as deep as it used to be, Nikita Zadorov (63.20%) had good possession, scoring chances rates, and quality share metrics in this game.
Corsi Clown – Sean Monahan (26.95%), Dillon Dubé (35.69%), and Milan Lucic (44.03%) had some extended zone time a number of times in this game but couldn’t turn it into a shot on goal or a scoring chance the majority of the game. So, it’s funny that the one time they can turn it into a chance it wasn’t from a stick-to-stick pass but a fortunate bounce. Doesn’t bounce if Monahan’s not in front of the net, but still more often than not the result was no attempt on net.
Taken By Chance – 6 high danger chances for while seeing none go against him – believe it or not Andrew Mangiapane (86.02 SCF% // 100%) does want to score goals in the Saddledome too. If anyone should feel snakebitten at the hands of Ullmark, it’s the Bread Man. Not everyone on the team was able to get in on high danger chances for. Trevor Lewis (29.98% // 0%) and Brad Richardson (57% // 0%) did not get anything significant, but recent call-up Adam Ružička (63.16% // 27.36%) managed to get something significant away from them – colour me interested in that.
xGF% – The dreaded 50% cut-off line saw 8 players above it and 10 below. The most strikingly weird difference was Noah Hanifin (53.18 xGF%) and Rasmus Andersson (37.03%). Both within 9 seconds of each other in ice time at 5v5 too, such a stark gap between xG% in partners is uncommon. Most likely the effects of an unfortunate line change or from special teams ending without goals. Hanifin and the second unit usually end PPs which gives them an immediate boost if they are attacking when the PP ends.
Game Flow –

The bounce back after the bad goal in the first was profoundly positive. Just as soon as the pedal was let up a little bit Boston grabbed the momentum… and actually capitalized on it. Charlie McAvoy and Brad Marchand are extremely talented players in this league, have to make sure they’re contained when they’re on the ice, if you even can. The tip Marchand made was highlight reel stuff from a future Hall-of-fame player.
Game Score – Top Flame comes in 11th overall by Game Score, and that guy didn’t even get a point. Andrew Mangiapane (1.39 game // 0.97 average) really gave his A+ effort, with second place being Nikita Zadorov (0.57 // 0.31). Worst score of the game – and I did notice him struggle with transitioning the puck well tonight – was Oliver Kylington (-2.50 // 0.81). Just remember even with that -2.50 in this one his average is still over 0.8.
Shot Heatmap – 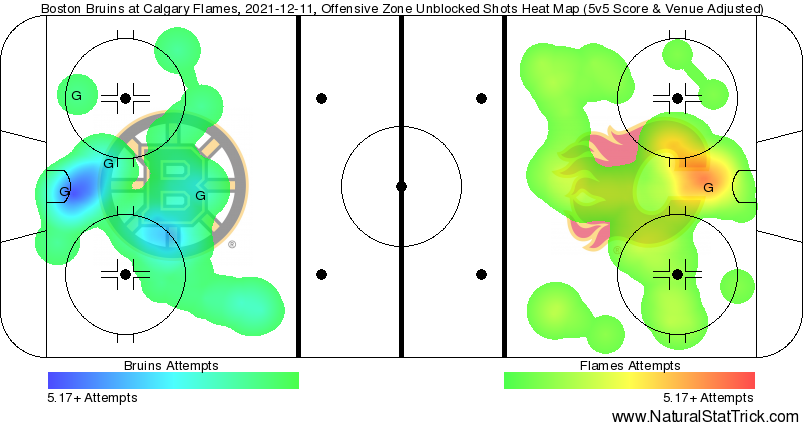 The Bruins had played Calgary once before – and Calgary dictated everything that happened in that one. Tonight Boston made a clear adjustment and it worked defensively, limiting Calgary’s usual amount of heavy chances from the crease area. They pushed them off the goal line and limited what they could feasibly get off from the slot. Mangiapane was the only one that could consistently beat his defender and get a dangerous chance off consistently.
In The Crease – I’m not going to sugar-coat it, that first goal can’t go in. I’d be willing to bet you don’t need to tell Markström that either. Low-danger goals do happen in the NHL from time to time, and as long as they don’t come regularly I can move past the odd bad one. 2.04 expected goals against at 5v5, 0.833 SV% (5v5) with two high danger, one medium danger, and one low danger goal getting by him. With the Flames currently on a 4-game losing streak I would suspect we see Markström next game as well, good chance for him to bounce back.
Today’s Specials – Where’s the movement on the power play? The puck gets rimmed around the back of the net to keep possession more than they attempt to put the puck on goal. Every single player has to attempt a cross crease pass before they shoot – it seems. Need quicker puck movement, and some actual physical movement from the PP boys. They had more than enough PP attempts to try and get back into the game.
Player Spotlight – Milan Lucic – What the Flames organization did for Milan Lucic tonight cannot be understated. They showed a veteran player great respect in re-honouring him for his 1000th game. What struck me as the most important: his daughters got to see him honoured and appreciated to a tremendous extent by the C of Red – and it lasted all night. Fans chanted “Loooooch” loud and proud, and even in a loss it would seem to have been something special for his family.
Flashalytic’s 3 Stars –
1) Andrew Mangiapane
2) Nikita Zadorov
3) Rasmus Andersson
The Flames will try to get off their four-game slide against the Chicago Blackhawks on Mon. Dec. 13 at 5:30 p.m. MT.
(Stats compiled from Naturalstattrick.com // Game Score from Hockeystatcards.com)