Beyond the Boxscore: Calgary Flames show Lightning the thunder in 6-3 win 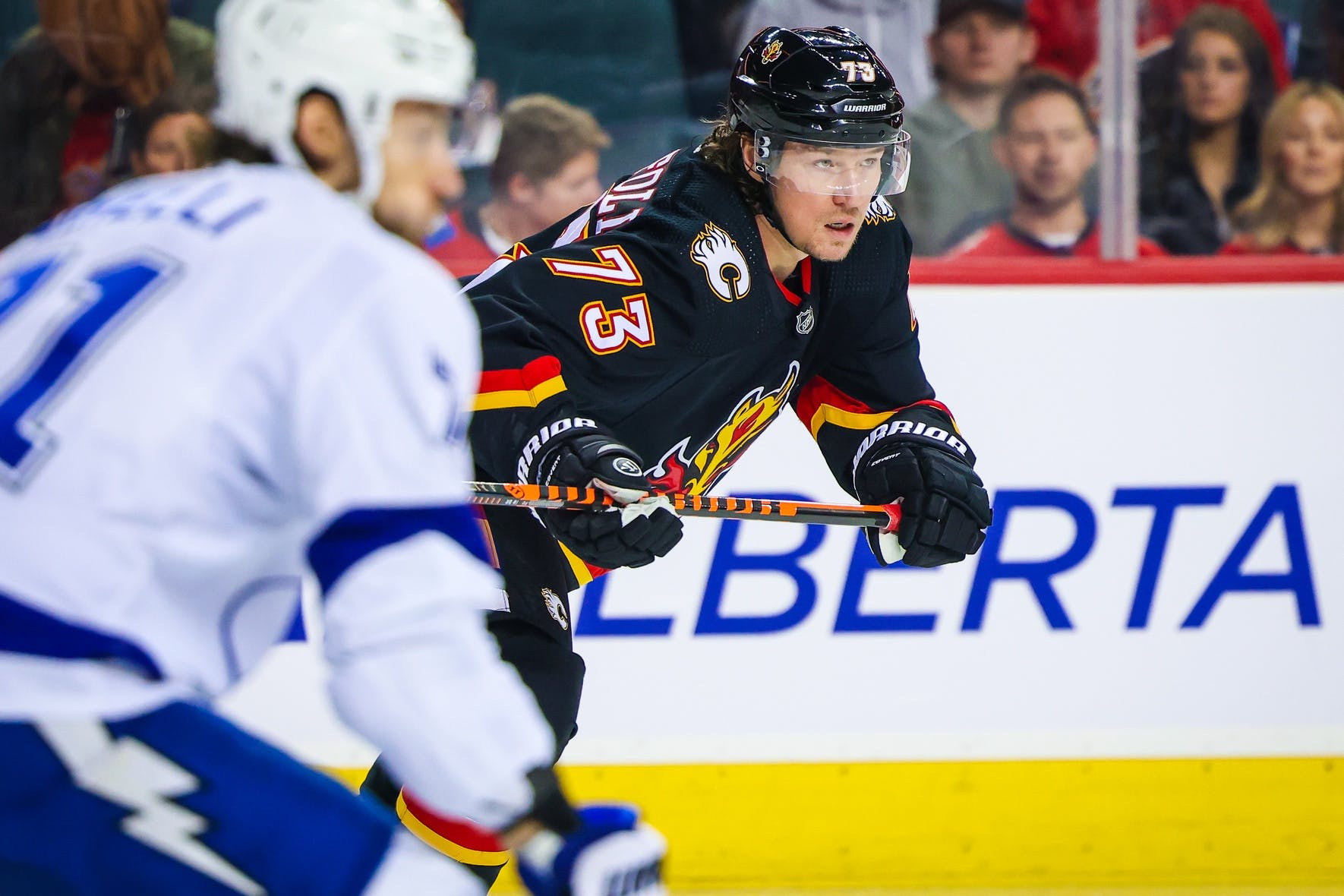 By Shane Stevenson
12 days ago
From the minute the puck dropped Calgary showed determination and fight throughout the lineup. A definitive group effort to always fight for the puck even if it had to be a bit too aggressive. Tampa responded with the same level of aggression leading to a bunch of special teams time and a lot of broken up 5v5 play. This was Calgary’s game to lose so it’s a real positive they found a way to find that two goal lead not once, but twice down the stretch. Just one game, here’s hoping it sparks a turnaround in the results of some future games.
CF% – 66.56%, SCF% – 58.28%, HDCF% – 79.23%, xGF% – 68.33%
It’s a Team Game – 5v5 in the third period Tampa Bay got no high danger chances. The Cirelli whack in goal was with the goalie pulled so it doesn’t count. Calgary was extra efficient at the puck retrievals in their own zone and instead of bracing for impact they prioritized getting it up on the breakout. That is the pace you’ll hear coaches talk about, they don’t want to give other teams time to mess them up. Know what your options are and pick one quickly – let’s get the puck out of our zone and into theirs. Simple enough and executed quite nicely Saturday afternoon in Calgary.
Corsi King – Walker Duehr (80.84%) had quite the spring in his step despite only playing 7:58 at 5v5. He got a bonus shift with Kadri (61.72%) and Huberdeau (65.55%) while Milan Lucic (67.95%) was in the box for fighting. Some people wanted to see Pelletier (78.68%) but being that it took two weeks to get him into a game in the first place that was probably a reach on hope. Really only one pairing got constantly buried in their own zone.
Corsi Clown – That was Michael Stone (46.87%) and Nikita Zadorov (39%). I’ve got no quarrels with Zadorov this season but – as I’ve touched on in the FlamesNation Radio podcast – Michael Stone strikes me as a better number 7 guy. If Calgary is looking to make additions I would like an additional left shot defence with speed – I’m sure the coach would like a clone of Erik Gudbranson. Either way he’s probably okay if you leave him, but it ain’t going to hurt his development if you trade for a guy and play him in his spot.
Under Pressure – 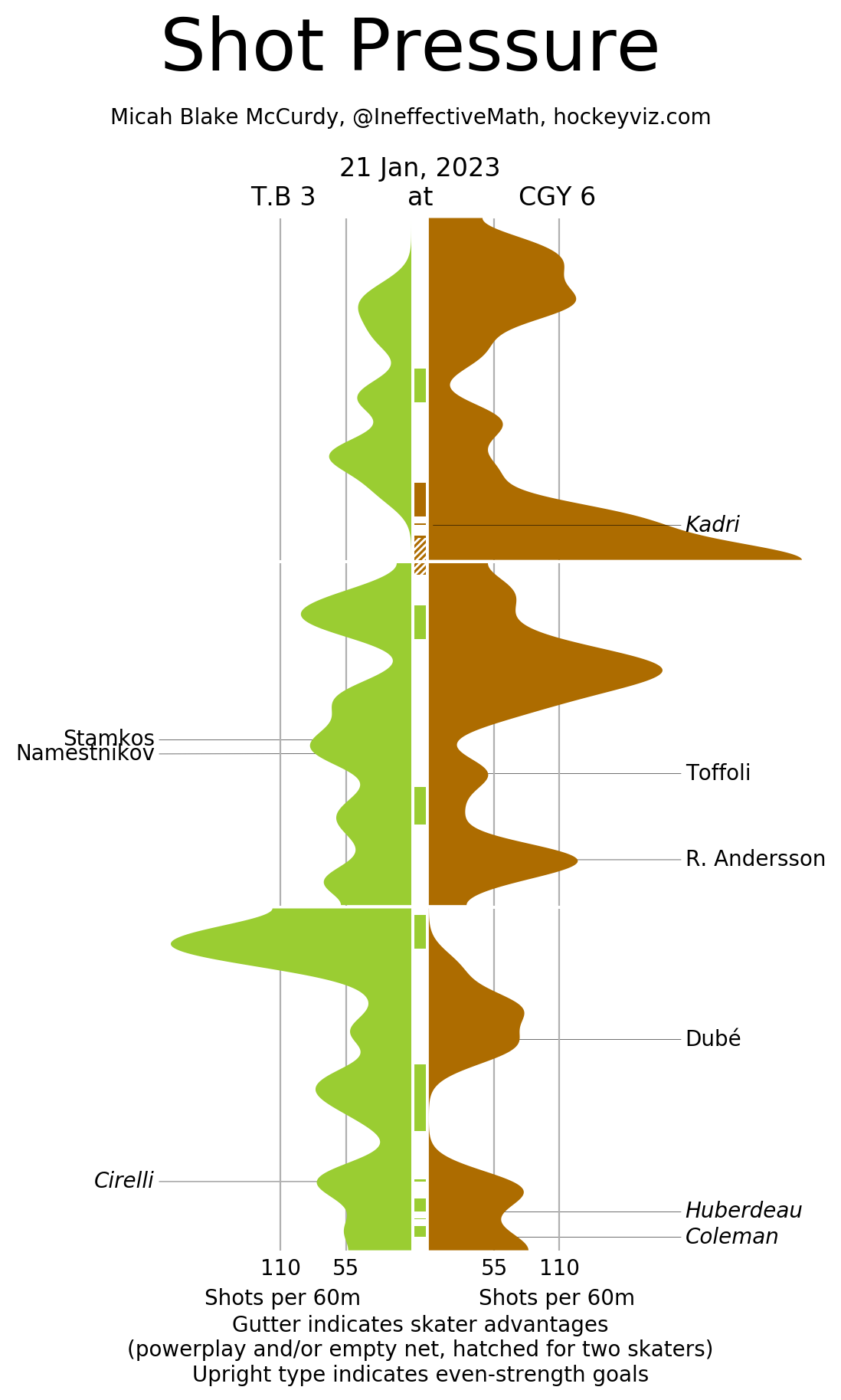 Taken By Chance – Not really anyone that I would outright grade as disappointing in this facet. Tampa hardly got close to Vladar and as such not many chances were dangerous. Add in that Calgary had the puck over 65% of the time and you’ll see that Tampa really struggled. Calgary kind of took it to them and they couldn’t stop it. The shoutout for this section goes to Rasmus Andersson (64.67 SCF% // 88.95 HDCF%) who was involved in over 8 high danger chances to lead the team. Mikael Backlund (60.41% // 86.36%) led the way for forwards being involved in 7 high danger looks.
xG Breakdown – 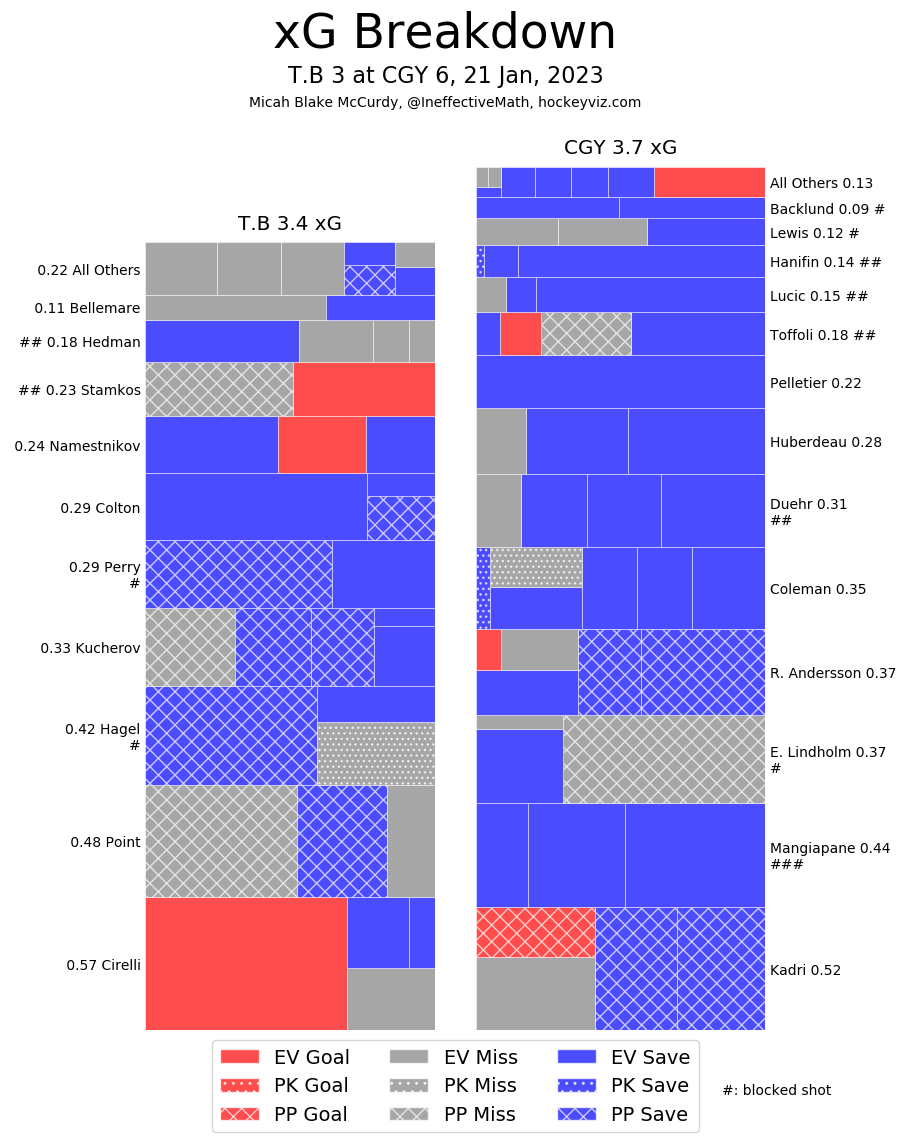 xGF% – I mean if you finish your first NHL game above 50%, I’d be be hyped but Jakob Pelletier (89.86%) did way more than that. This roster is not going to remove veterans from the lineup as long as Darryl is the coach because he wants those vets to compete for the Stanley Cup. It’s not what the fans want – outside of those people that keep telling him everything’s fine in his local supermarket – nor seemingly what the GM wants. I mean you don’t call up Pelletier before a 5-game road trip to have him make his debut at home 2 weeks later. That all being said the goal is still winning and a championship, which as a fan you should also want – he just doesn’t need to disrespect his players in front of the media anymore. MacKenzie Weegar (79.47%) gave us a beautiful new video clip when he waved bye-bye to Bogosian going to the penalty box – he led all the defence in xG%.
Game Flow – 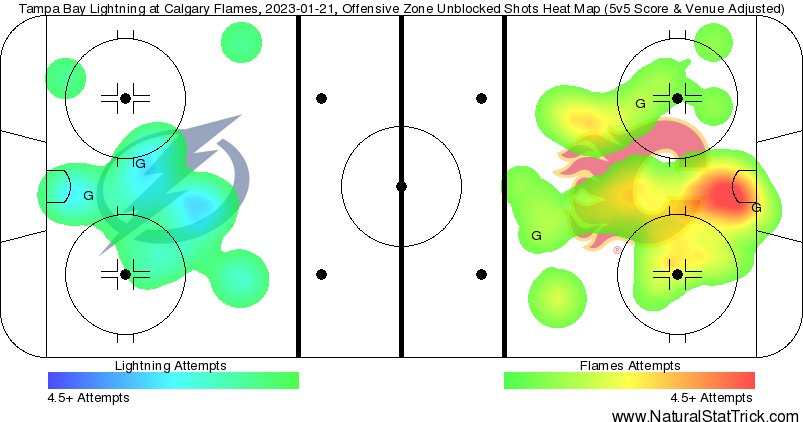 In The Crease – 5v5 the Lightning hardly generated squat – and then after the puck happens to go from Hanifin’s stick into some open space one of the best goal scorers of all-time just happened to get it and rocket it by the goaltender. I’m not convinced prime Hasek could have stopped that rocket. After that the puck bounces in, Calgary is trailing and Vladar doesn’t panic. He gets a whistle on the next shot and calms everything back down. 1.30 expected goals against 5v5 with 1 high danger and 1 medium danger goal getting by him.
8-0-3 in his last 11 games, what a run.
Today’s Specials – Okay just so everyone know I asked Robert to clip some Flames powerplays lately as I was going to do a dive into their ineffectiveness – especially with how they attack, but now they decided to start scoring on low percentage shots so this article is going to be delayed even farther. Tampa’s number 2 ranked power play could not get anything against the Flames PK and if they got a hard shot off someone made sure to block it. Shoutout to Chris Tanev and all the bruises I’m sure are always on his legs.
Player Spotlight – MacKenzie Weegar – This guy spent years getting dummied down in Tampa and has nothing but hate in his veins for everything they are – and that has been missing from Calgary because that’s the passion Tkachuk brought to this team. Now I want Weegar being calm and composed more than anything, but him making Kucherov throw a bit of a tantrum on the ice that cause Bogosian to overreact like a fool was pure gold and great entertainment. The rest of the game started to get chippy and heavy after that which made it even more worth watching. One of the best games to watch this season – incited in part by Mr. Weegar.
The Goals –
Flashalytic’s 3 Stars –
1)Rasmus Andersson
2)MacKenzie Weegar
3)Elias Lindholm
(Stats compiled from Naturalstattrick.com // Game Score from Hockeystatcards.com // xG and Under Pressure charts from HockeyViz.com // Game Flow and Shot Heatmap from NaturalStatTrick.com)
Buh Bye now!
Editorials
Recent articles from Shane Stevenson