Beyond the Boxscore: Flames did not deserve to lose to McDavid and the Oilers 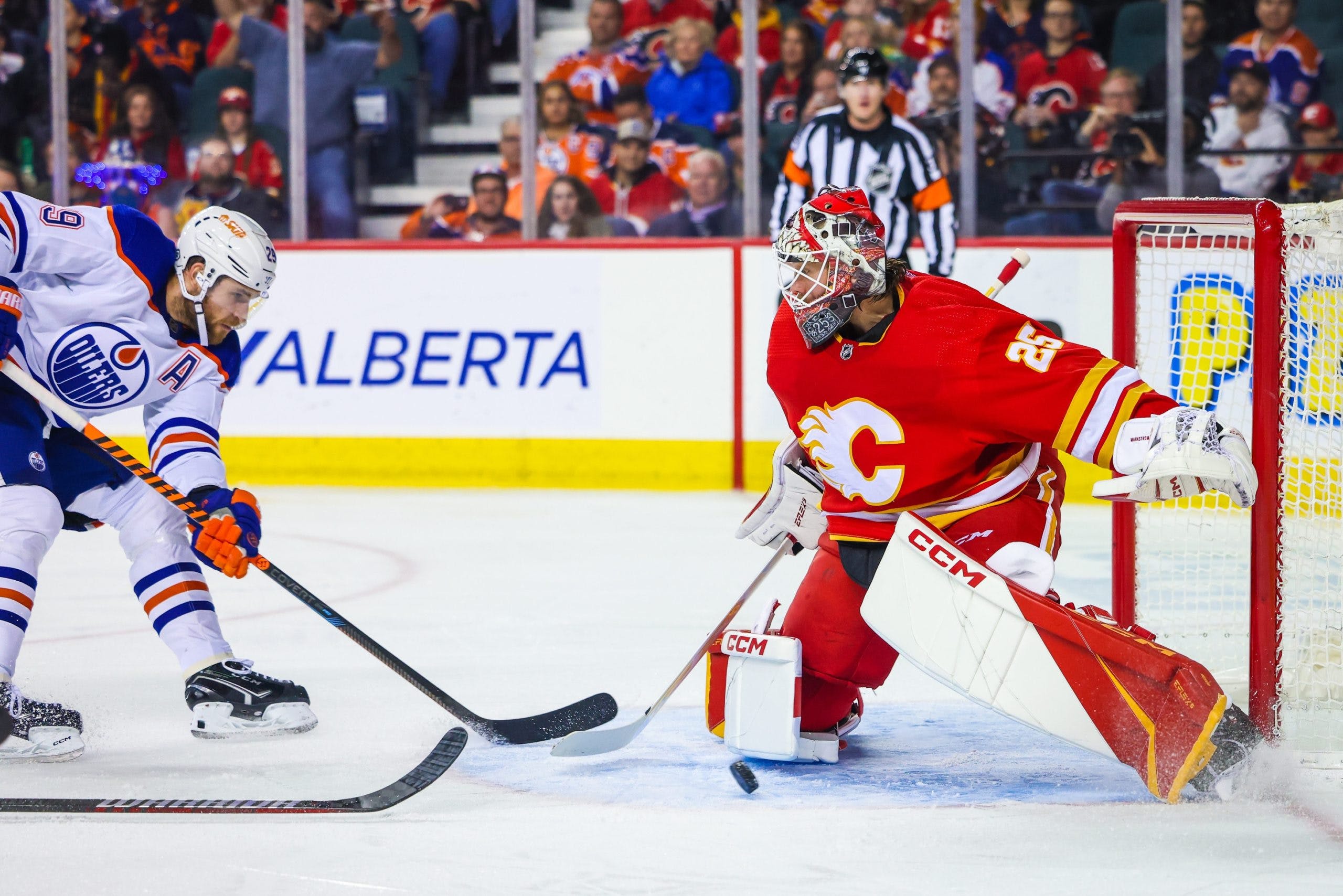 By Shane Stevenson
2 months ago
Everything was going swimmingly before the back-breaking goal from the half-wall. The Calgary Flames had controlled the last two periods at 5v5 but Connor McDavid shooting a routine shot with his butt touching the side boards was all it took to tie the game. That sounds harsh – it was a weird rim around the boards, and you always want your goalie to stop the puck if he can – but it landed on the stick of the most dangerous guy afterwards, which was unfortunate enough. Calgary got better as the game went on, highlighted by a dominant second period that saw all the momentum turn towards the Flames. In the end it meant nothing with Calgary blowing the well-played game with bad goals in the third period.
CF% – 63.27%, SCF% – 51.92%, HDCF% – 61.21%, xGF% – 61.01%
It’s a Team Game – In actuality the Flames skaters collectively put together a superior performance at 5v5. High danger chances favoured the Flames 14 to 8. Everything went inherently good for Calgary except the score of the game. It would make sense if Flames fans were sick of watching McDavid do what he usually does. He’s already a programmed cheat code to begin with it just tends to find a way to leak out every single time he plays Calgary. Pretty entertaining hockey game for both sides regardless.
Corsi King – Brett Ritchie (77.55 CF%) leads for the second straight game. Beautiful top shelf goal that caused me to start hootin’ and hollerin’ in the nosebleeds. The set-up from Lucic (66.18%) was chef’s kiss. Elias Lindholm (75.08%) was the most impactful we’ve seen on a game in an offensive creation sense in a while. Why was this a good game even with the loss?
Corsi Clown – Because nobody was below 50% in chances. Every single player except for Kevin Rooney (60.81%) had double digits in attempts for while out. Last season this happened about five times and the Flames won by multiple goals each time it occurred. To do this in a loss is a bit of a strange occurrence.
Under Pressure – 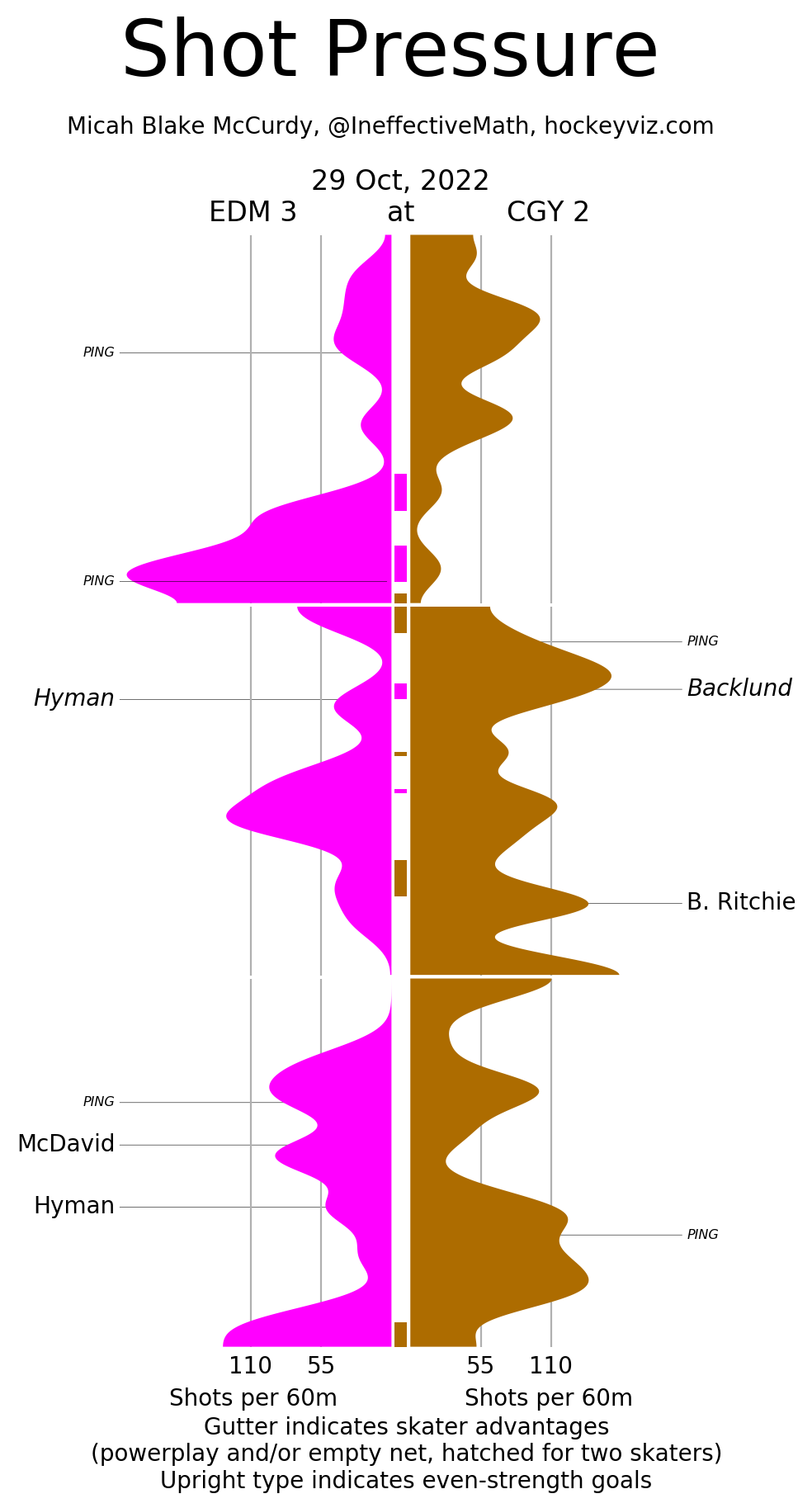 A whole bunch of dead spots for the Oilers because Calgary had the puck. Best defence against the best player is don’t let him have the puck – didn’t matter he found it anyway. Really interesting that without a power play (weak calls all night for what its worth) the Oilers had nothing going for them. After the first one the stars get their legs under them and the game gets even harder.
Taken By Chance – We always like to expand past possession because it tells a story. Blake Coleman (20.80 SCF% // 0 HDCF%) and Mikael Backlund (18.55% // 0%) both had the majority of shot attempts, but actual scoring chances that hit the net was a different story. 5 high danger chances against Coleman at 5v5 with non being generated for the home team. The flip side saw Ritchie (68.80% // 100%), Lindholm (71.01% // 100%), Toffoli (62.33% // 100%), and Rooney (65.38% // 100%) never saw a high-danger chance go there way. Lindholm himself was involved in 7 high danger chances – needs to find that scoring touch again.
xG Breakdown – 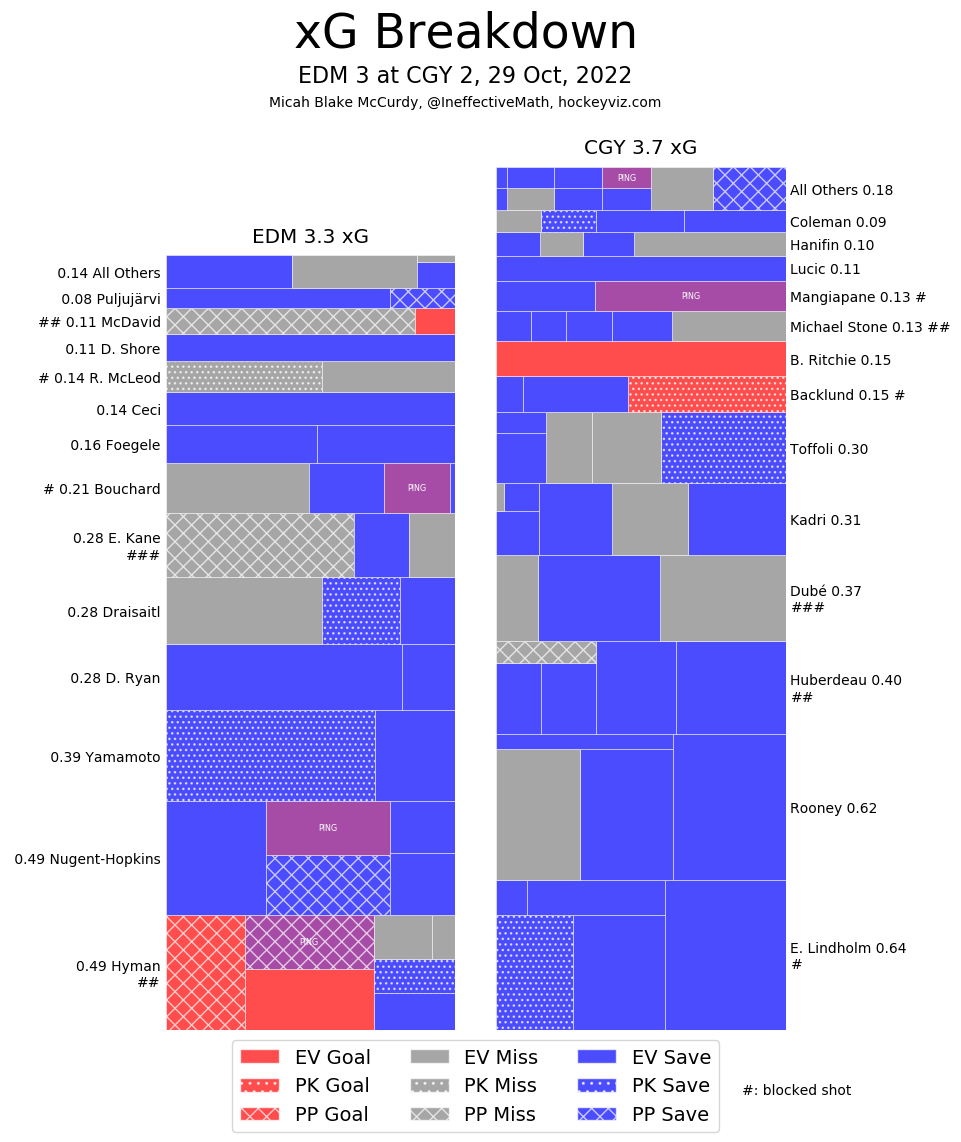 Kevin Rooney was noticeable from the stands a few times. I’m still not used to the 21, but I saw it around the net a fair amount last night. I wonder if any of Michael Stone’s 5 attempts were farther than a step away from the blueline or the boards? I know I could find it on HockeyViz.com – I’ll go check it out and so should you.
xGF% – Brett Ritchie (81.91%) narrowly edges Lindholm (81.51%) in terms of cumulative quality of opportunities – remember we just discuss 5v5 in most of these sections. Jonathan Huberdeau (77.10%) piut up some of his best numbers to date in a Flames uniform. The next step is doing it again and getting a run of quality games together. After 30 games we’ll be able to see a randomized sample and can see where the overall pace of things is at – but for that to be positive games like this need to come consecutively and consistently.
Shot Heatmap – 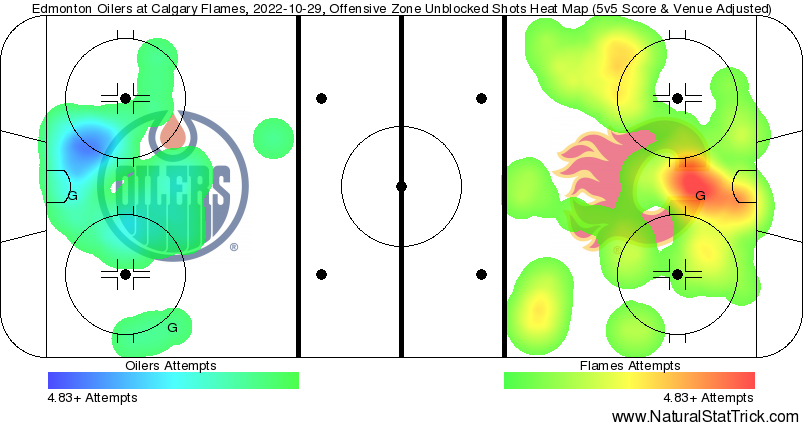 Oilers never got directly to the crease – a massive benefit for the goaltender. Calgary’s attack made the night incredibly difficult for Skinner. Maybe for the third Battle of Alberta we’ll have Pinder throw the pads on and tend the goal for the Oilers. He already has the Mike Smith doppelganger thing going for him we could most definitely pull it off.
Game Score –
Game Flow –

A real back breaker losing this game. The better team does not always win in hockey – Flames should not have beat Carolina earlier this year and did, happens to everyone.
In The Crease – I mentioned in the intro that you always want your goaltender to play the puck if he can, but that doesn’t make the second goal against sting any less. For a team that was controlling pretty much everything it’s deflating for the fans, but the Flames did respond well. Then the puck takes a bad bounce into the slot and it’s 3-2 making that second goal sting more. It was a low danger chance, and the model says to stop it – that’s all the comments I’ll have on that because I couldn’t save an Andersson Hail Mary from the opposite end, let alone a wicked wrister from McDavid. 1.80 expected goals against at 5v5 with one high danger and one low danger chance going in.
Today’s Specials – It can be lost in the grand shuffle of everything, but Backlund almost made it 2-0 with consecutive shorthanded goals. Skinner had to make a decent save before Draisaitl let it be known he’s here too. Hyman got the PP goal but it was an unreal beam pass from the big German. Calgary’s power play didn’t get on the board, only really got one chance from in tight. Pretty meh night when up a man to be frank.
Player Spotlight – Nazem Kadri – The first game where I hardly noticed him and that’s a compliment to how good Kadri has been to start the year. He can’t be expected to be the guy every single night all year and someone else is going to need to step up when he’s not running 60%+ in the expected goals column. Nobody can do it 82 games a year and nobody expects Kadri to either. Lots of players on this team that need to find an offensive touch yet. 75 games remain so lots of runway – it’s a marathon not a sprint.
The Goals –
Flashalytic’s 3 Stars –
1) Brett Ritchie
2) Elias Lindholm
3) Jonathan Huberdeau
The Flames next game is Tuesday at 7 p.m. MT at home against the Seattle Kraken.
(Stats compiled from Naturalstattrick.com // Game Score from Hockeystatcards.com // xG and Under Pressure charts from HockeyViz.com // Game Flow and Shot Heatmap from NaturalStatTrick.com)
Editorials
Recent articles from Shane Stevenson