Beyond the Boxscore: Flames see the goal dam burst against Kings 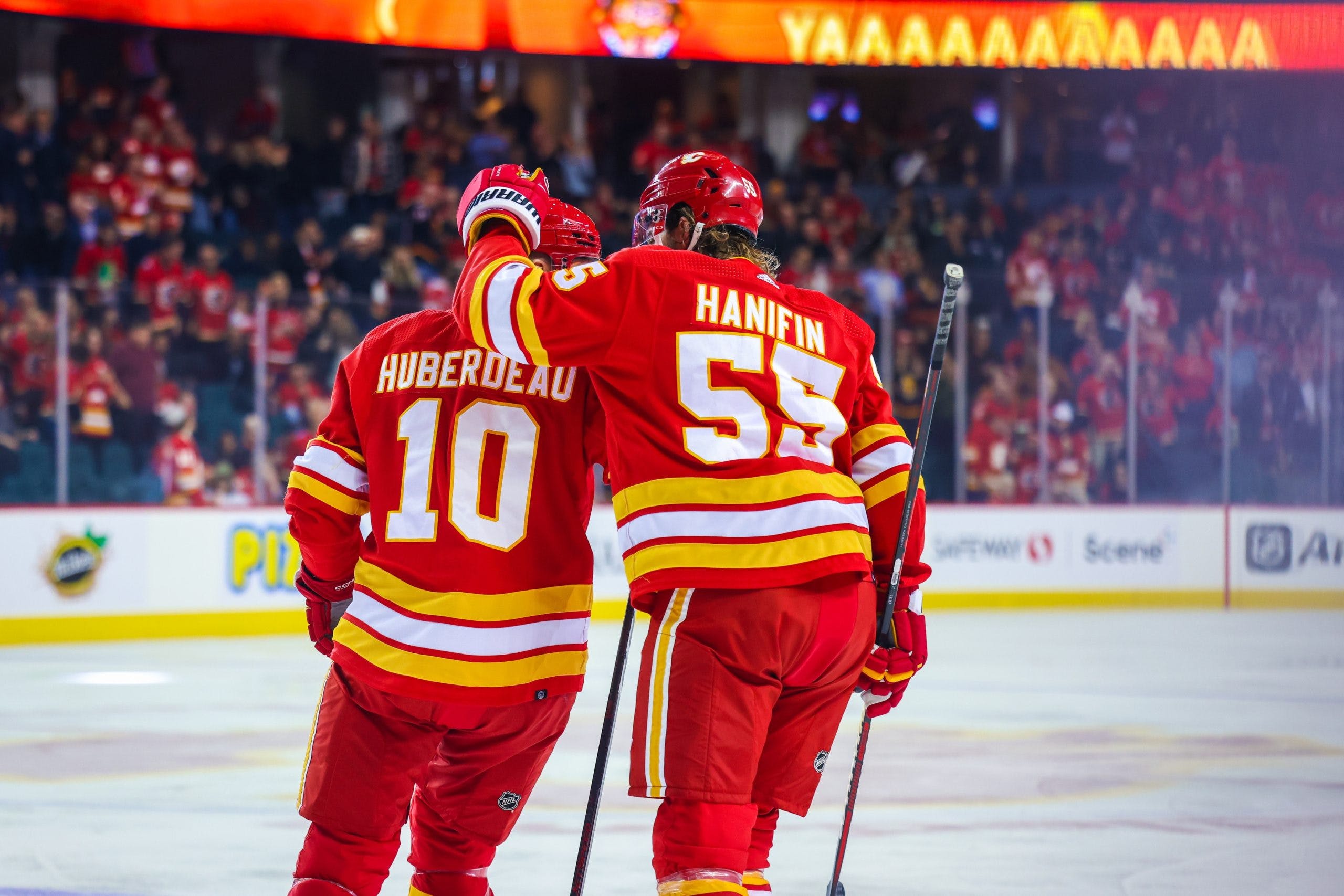 By Shane Stevenson
2 months ago
Someone forgot to tell the goaltenders to make some saves in a 6-5 track meet that saw Calgary end victorious. It was the rightful result after the Flames put together a solid three period performance never letting the Kings get too much momentum 5v5. LA plays a very similar style of game to Calgary, but the home team showed them how it was done. It got a little crazy at the end of the game as the Kings got some weaker goals against Jacob Markstrom, but the goaler showed up and made that one extra stop he needed to – leaving with the W.
CF% – 59.56%, SCF% – 72.6%, HDCF% – 81.62%, xGF% – 69.1%
It’s a Team Game – Should the Flames have scored six goals? Not really – but they did. Should they have given up 5 goals? Also no, and yet again they did. Not the best goaltending from anyone in this match. Calgary never lost the high-danger chance battle 5v5 in any period while also finishing higher in xG too. The Kings failed to gain traction outside of 4v4, their power play, or 6 on 5. The two goals they did get 5v5 were some great hands and a failed check for Fiala, and then some and positioning from Markstrom on Kaliyev’s second. The actual team game was alright, If Markstrom was at his best this is 6-2, maybe 6-3 at best.
Corsi King – Chris Tanev (82.15 CF%) and partner MacKenzie Weegar (79.55%) spent next to no time in their own zone. Tanev is the king of dump-In retrievals and Weegar came with glowing transition metrics, so this doesn’t surprise me one bit. Jonathan Huberdeau (68.12%) led the way for the forwards with a big game next to Mikael Backlund (67.85%) whose been playing one of his best stretches of dominant hockey he’s ever played in his career. Nikita Zadorov (66.98%) got regular shifts mixed in with other pairs – Nick DeSimone (41.23%) did not. He played 7:19 at 5v5 the lowest of any skater by 3 minutes.
Corsi Clown – Noah Hanifin (33.44%) and Rasmus Andersson (40.16%) spent the most time in their own zone – they had drastically different high danger ratios but neither fall below 48% there. The Kings had to get some pressure – Dillon Dubé (47.82%) finished almost even with only 6 Corsi events for and against. Only one player saw double digit Corsi events against and that was Andersson at 17.43 (5v5 SVA).
Under Pressure – 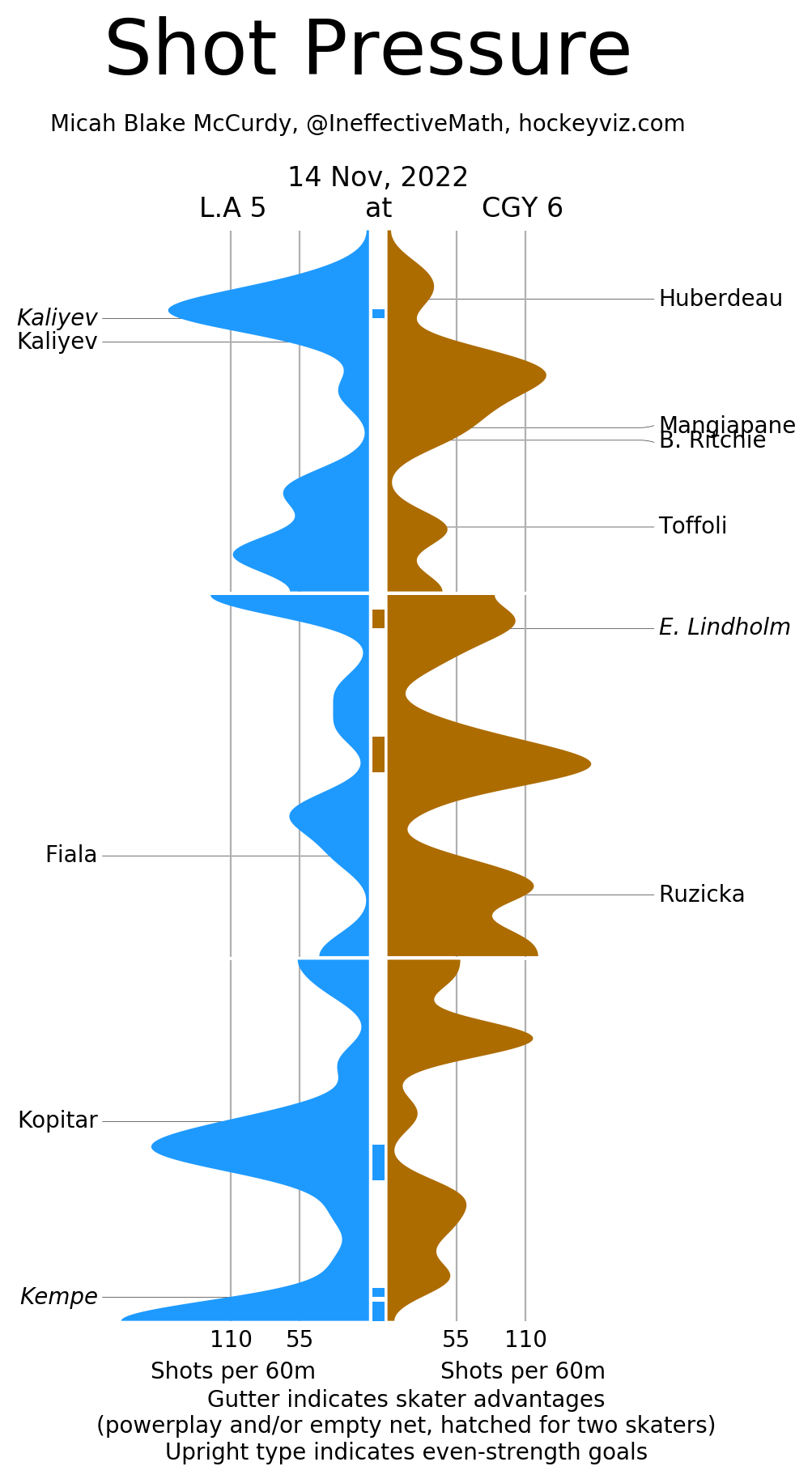 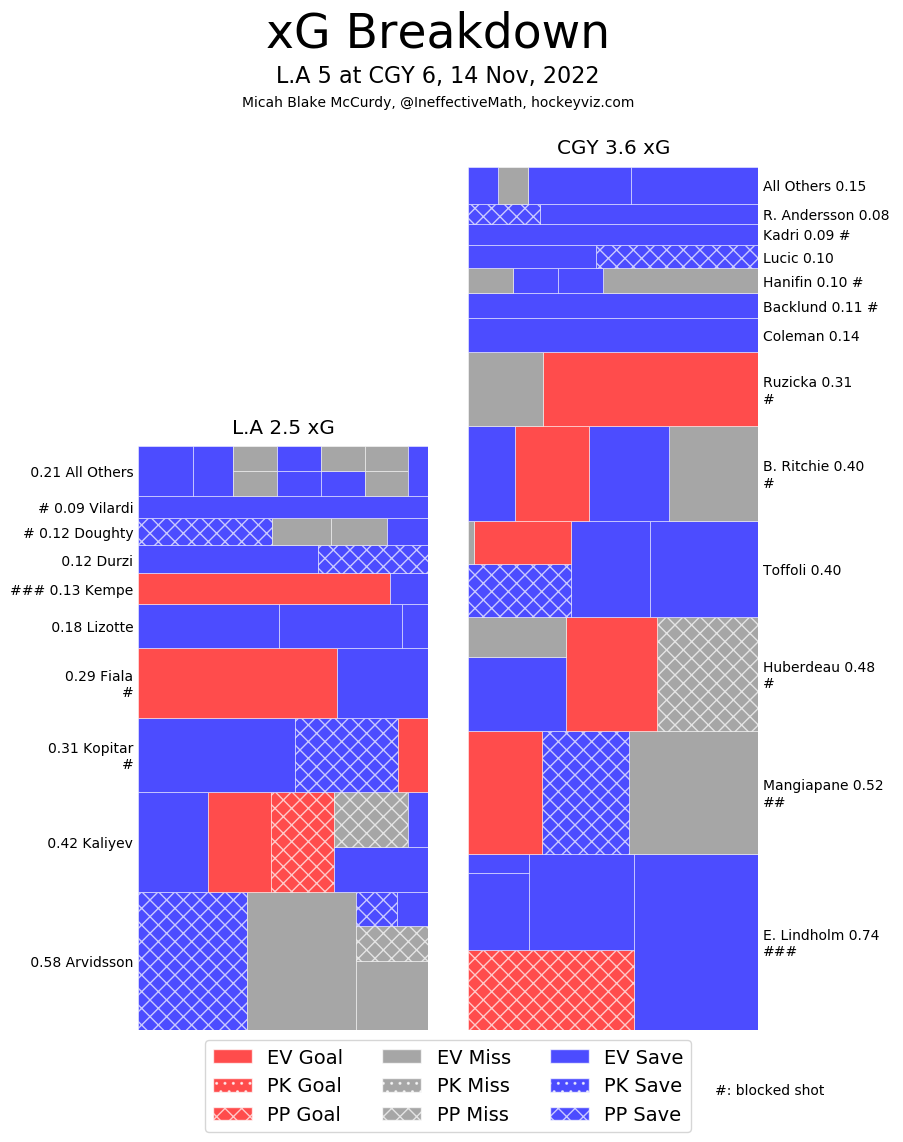 It was really good to see Mangiapane capitalize on that bounce off Lucic’s rear end. He needed a bounce and maybe that will spark some regular goal scoring. He’s got it in him to get at least 25 each year – they’ll start going in regularly as the games keep happening.
xGF% – Chris Tanev – once again being mentioned – with a 95.84 xGF%. He and Weegar (85.93%) combined for no points and yet without them there is no way the Flames get these many goals. Unsung heroes on the night for sure. Blake Coleman (83.47%) and Brett Ritchie (83.47%) had some pop in between Dillon Dubé (77.25%). Ritchie specifically was a one-man wrecking ball on his goal – causing the turnover and burying the return pass. 5v5 this game was all Calgary, and it wasn’t even close. This kind of play regularly will come with a whole lot of points in the standings for the Flames.
Game Flow –

The first period was… even? I mean it was in terms of skater play and cummulative chance quality, Quick just let a lot of goals in. Calgary actually played there best hockey as a retaliation of the Fiala goal. The play to end the second period was all Flames as they tried to extend the lead for the third. Turns out they got just enough.
Game Score –
Shot Heatmap – 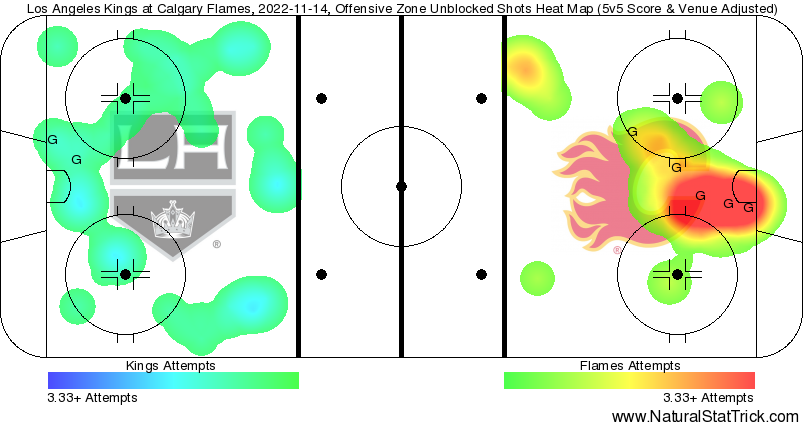 That’s one aggressive 5v5 attack and the Kings won’t be too happy they gave that much up in front of their net. Calgary’s road trip saw Boston and New Jersey also get shot heatmaps like this – The Jets was a blip between them, but this is a nice trend to see.
In The Crease – No need to sugar-coat things – it wasn’t the best night for the goaler. The Kopitar goal with no traffic through distance and the Kaliyev goal where he was not able to kick himself back to cover the post are 2 goals you don’t like seeing go in. They go in every year though so I’m happy it came in a game they won. 5v5 it was 1.31 expected goals against, one high danger and one medium danger goal getting by. When push came to shove he did make that one gorgeous save that was needed on Kopitar to secure the victory. Next game the slates clean and you can try again.
Today’s Specials – This next part is going to be in all caps to simulate that I’m shouting it. KEEP NAZEM KADRI AS THE BUMPER ON THE POWER PLAY. Then never move him away from there. He’s like a train station getting puck into the middle then immediately dishing them out in another direction. Is he going to shoot? Pass? Reverse? The defenders don’t know and he never gives them time to think. He knows where he’s going and what he wants to do before the pass ever gets to him. They were using him on the boards – stop that – keep him in the middle of the ice he’s way more dangerous.
Player Spotlight – Tyler Toffoli – A while back I criticized his play on the boards for not being effective enough. With Ružička there for support Toffoli looks like a new player, constantly winning puck battles and now creating dangerous scoring opportunities for his line. He was able to flash the lethality of his shot on his goal where he sent a one timer on a 2-on-1 from above the circles and Quick didn’t stop it. A fair bit lucky but it had quite the velocity on it. This is the Toffoli the Flames need to win games.
The Goals – Strap In there’s six of them
Flashalytic’s 3 Stars –
1) Chris Tanev
2) Elias Lindholm
3) Tyler Toffoli
The Flames hit the road for a six game road trip – it starts Thursday at 5 p.m. MT against Tampa Bay.
(Stats compiled from Naturalstattrick.com // Game Score from Hockeystatcards.com // xG and Under Pressure charts from HockeyViz.com // Game Flow and Shot Heatmap from NaturalStatTrick.com)
Editorials
Recent articles from Shane Stevenson