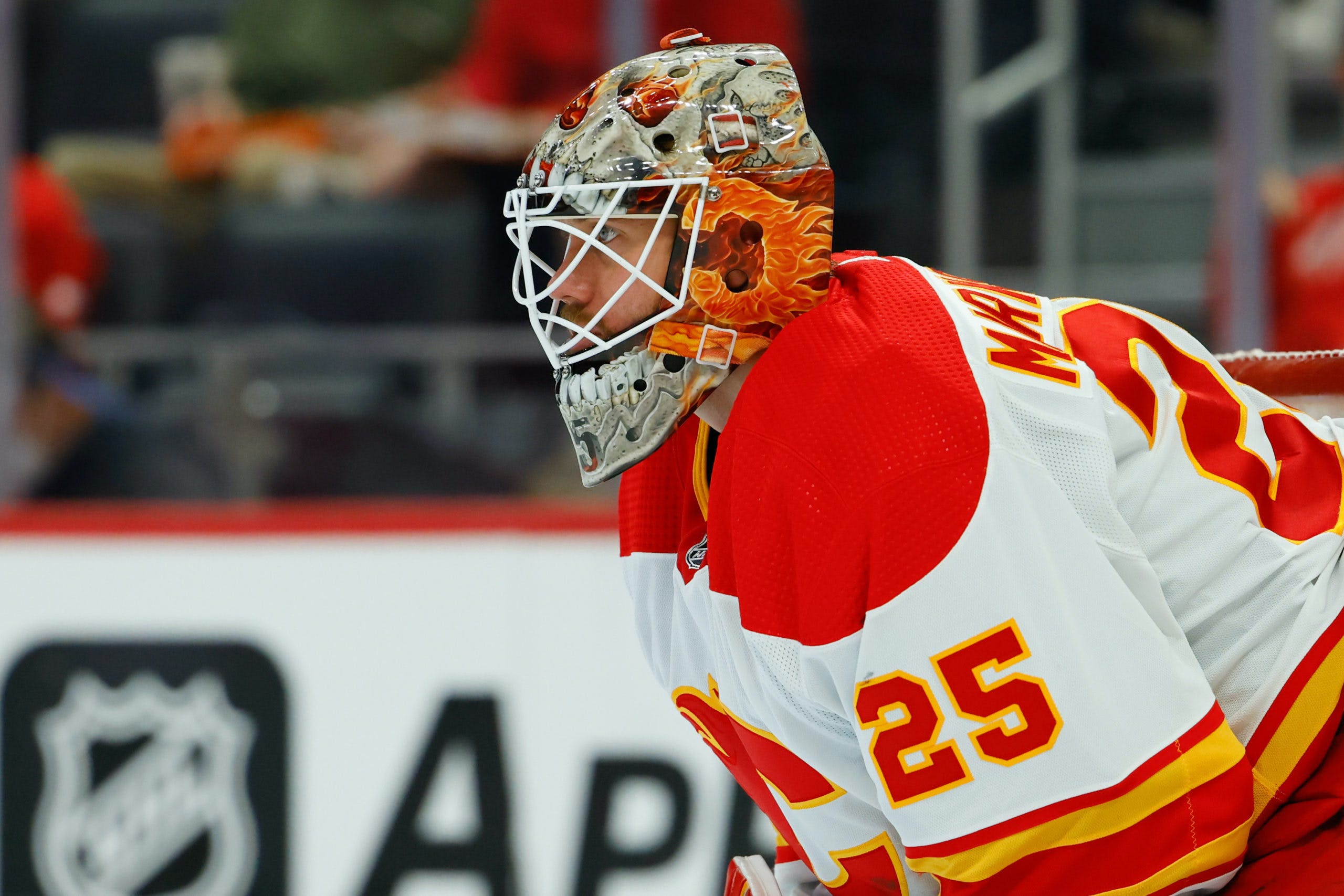 By Shane Stevenson
1 year ago
I wonder if Adam Fox knows what people in Calgary really think of him? Do you think he got the message?
The Flames sweep the regular season series against the Rangers. Calgary never quit and piled on in the third period. Matthew Tkachuk scored a goal that could be considered the goal of the week, but won’t because a cheat code plays up the QE2. Bad weekend to be playing on the New York Rangers defence and that’s music to many Flames fans ears. The point streak goes to 10 games: 7-0-3 (franchise record is 13 games).
CF% – 62.81%, SCF% – 62.42%, HDCF% – 55.33%, xGF% – 66.9%
It’s a Team Game – Flames got out chanced in the high danger area in the first period, and still allowed 9 high danger chances against them overall, so there are things to clean up. Some uneasy turnovers at the offensive blueline that might get missed because of everyone’s commitment to backcheck. That’s really the extent of my criticism tonight though. Honestly Rangers ran out of gas in the third and Calgary made them pay.
Corsi King – Andrew Mangiapane (81.51 CF%) and partners Dillon Dubé (78.91%) and Milan Lucic (73.75%). #Mangialympics is in full swing this season – spread awareness across your social media. Matthew Tkachuk (71.36%), Elias Lindholm (69.58%) and Johnny Gaudreau (66.80%) were a force again, but that’s becoming the normal more than anything.
Corsi Clown – Mikael Backlund (38.86%) and Tyler Pitlick (38.86%) were the only ones under 40%. Makes sense the matchup line is the one that sees generic Corsi pushback, especially on a team with a top 10 talent in Panarin. Don’t like that take? Check his numbers from seasons past – consistent excellence. They may have been caught in their own zone tonight, but no goals got by them.
Taken By Chance – As said in the first section the Flames were a victim of a fair number of high danger chances – every single player was subject to at least one being put against them at 5v5. Then again Dubé (83.16 SCF% // 88.02 HDCF%) and Mangiapane (83.86% // 88.02%) countered with seven 5v5 high danger chances of their own. They each got an assist for their effort but easily deserved more. Flames are built dangerously with that top line getting the opponents best match-ups, the shutdown line facing the opponents best players, and the Mangi-dubê connection getting to feed off whatever’s left. Sutter truly is using his four lines effectively.
xGF% – Erik Gudbranson (51.83 xGF%) was able to salvage his night when the Rangers really lost their wind. His play has dropped off in his defensive end significantly at 5v5, but in the offensive zone he’s done a tremendous job of keeping the play alive. I didn’t expect him to do anything well either and he’s been a very good penalty killing presence. If he can even shore his defensive zone reads/passing even marginally I may stop harping on him all together.
Oliver Kylington (79.68%) through 10 games hasn’t just been a top 4 defenceman, he’s been effective enough to have numbers ranking with the top defenceman in the league. As every game passes his confidence level has visibly been shown on the ice – specifically in his aggressiveness in using the mobility through the neutral zone.
Game Flow –

Those last three goals weren’t really fair because the Rangers very much looked like they were overcooked on the second half of a back-to-back. Regardless those boxscore stats make the AAV go higher so why not put them in right? Right? (cue the nervous laughter as i think of all the Flames players trending towards needing significant raises when this season ends)
Game Score – At the time of writing the game score values had not been uploaded – please consult hockeystatcards.com when reading to view this games Game Score as well as the players average score. Spoiler: Look for Tkachuk and Gaudreau near the top.
Shot Heatmap – 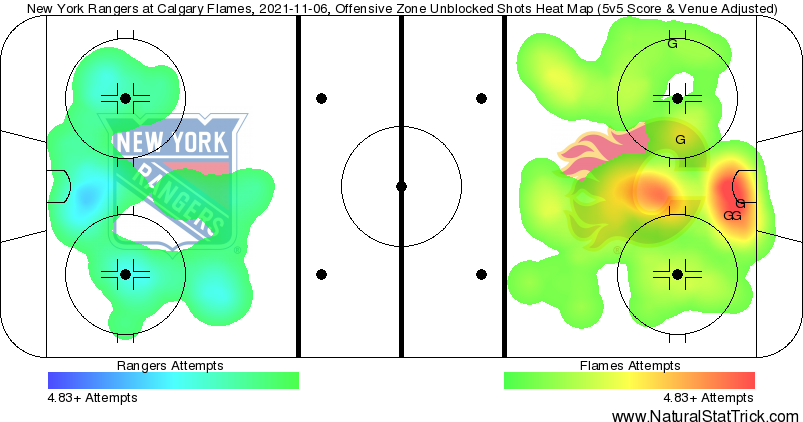 That’s at least nine games by my count where Calgary has made the opposing goaltender’s night hard. Consistently in the kitchen cooking with chances and – as we can see by the three G’s in the heavy red – paid off in spades. Do that against any opponent and you should find the W.
In The Crease – Jacob Markström has set a career high in SO’s in his 9th game as a starter in the 2021-22 season. In the words of the great philosopher Shania Twain – it can only go up from here. 1.70 expected goals against (significant) with no goals against and a 1.000 SV%. Keep on keepin’ on Markström.
Note: for the record when I was a kid and someone made a windmill save like this playing road hockey we called it “autographs later” because you have got to respect the flair.
Today’s Specials – Good on Elias Lindholm to get the puck out of a scrum in the corner and not immediately put It on net. He came out of the corner with his head up and found Tkachuk cross crease causing Shesterkin to slide to his right. Tkachuk immediately shovelled it behind the line of scrimmage to the RB gunning up the middle in Sean Monahan and he shot it right through the gap for a 1-0 lead. Flames ended up winning by a touchdown, so this analogy felt needed.
Player Spotlight – Matthew Tkachuk – He has not slumped, he has not taken a game off, and in this one he got his points in abundance. He was never included in a trade, he does not care that everyone said he was, he only cares about getting the W. To myself Tkachuk has put everything that happened last season behind him, and he came to play this season. Top line player any way you describe him. Between the legs goal counter: one
Flashalytic’s 3 Stars –
1) Matthew Tkachuk
2) Johnny Gaudreau
3) Jacob Markstrom
HM: Andrew Mangiapane AND Dillon Dubé
The Flames continue their season Tuesday against the San Jose Sharks at 7 p.m. MT. All covered right here at FlamesNation.
(Stats compiled from Naturalstattrick.com // Game Score from Hockeystatcards.com)
Every game is more enjoyable if there is a villain/heel involved. So once again, thank you for listening Mr. Fox.
Uncategorized
Recent articles from Shane Stevenson