Beyond the Boxscore: The Calgary Flames put up a touchdown, fail to convert extra point 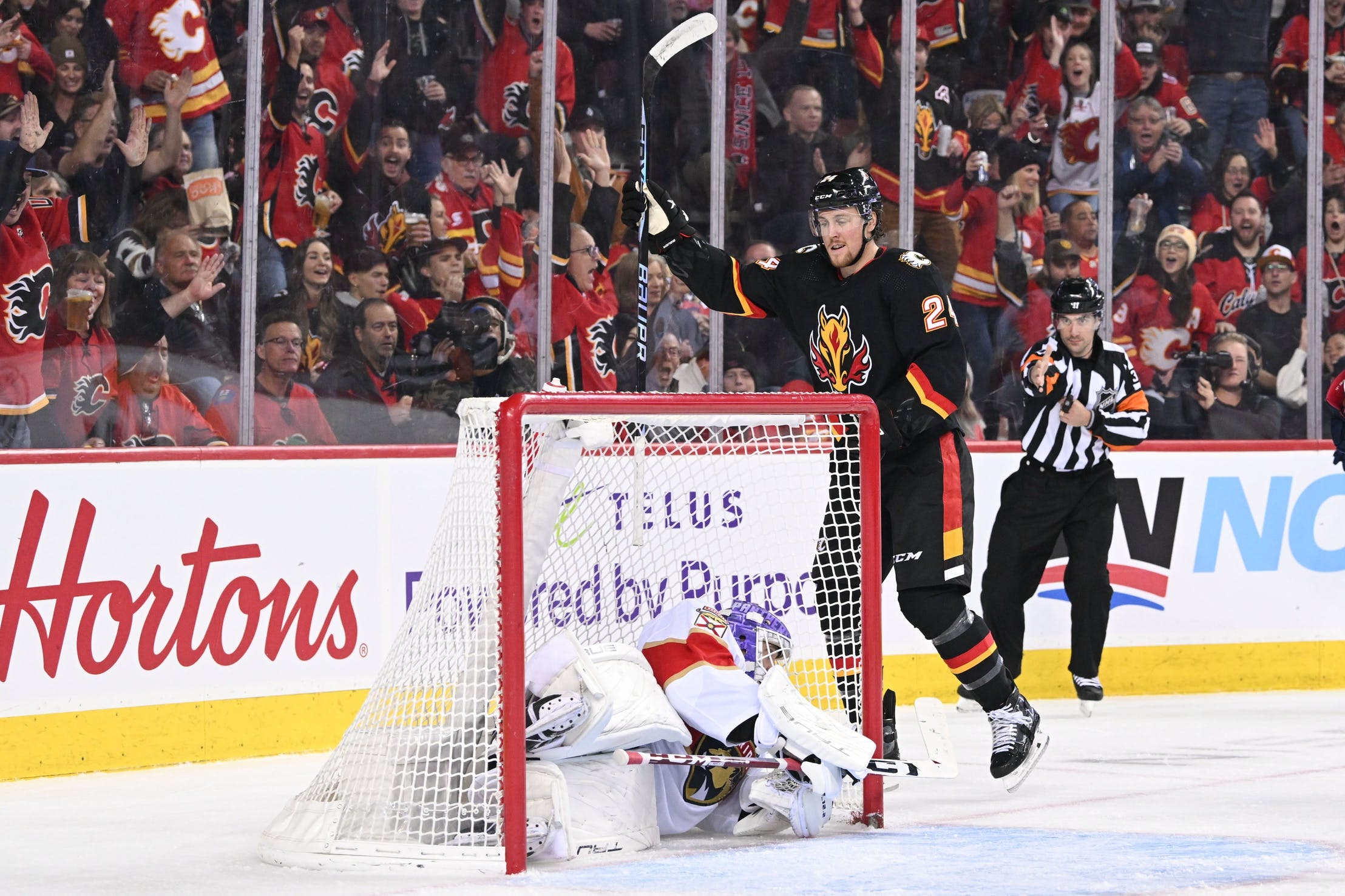 By Shane Stevenson
1 month ago
A bad performance in the opposing crease helped aid the Calgary Flames to a victory Tuesday night. Matthew Tkachuk couldn’t will his new team back into it as he made his return to Calgary. A nice standing ovation from the crowd to let him know how much his hard work was appreciated, followed immediately by a shower of boos the next time he touched the puck. Hey you did leave town man, that’s warranted too.
CF% – 51.31%, SCF% – 42.9%, HDCF% – 46.29%, xGF% – 49.47%
It’s a Team Game – I would not call this game a complete sixty-minute effort because the second period left a lot to be desired. Dan Vladar weathered the storm admirably when he needed to and played a massive part in winning this game. Good for them Bobrovsky was the polar opposite so when they picked the pace back up to start the third period it allowed them to maintain their lead. All-in-all this was a decent showing against a top ranked team in the NHL. The Panthers have provided the Flames with two bounce back games after some recent losing skids – unfortunately for them they won’t see the Panthers until next season (most likely).
Corsi King – Brett Ritchie (70.88%) is seeing the sh% slump that drug around with him all last season end in a big way this year. Andrew Mangiapane (70.75%) seemed to put a little more Honda Civic into his game after Brad Treliving requested it. That line with Dubé (70.75%) and Kadri (61.76%) had some extra pop. Maybe it was just the return of Blasty – who secretly feeds Dillon Dubé the power of goals so often it’s become predictable.
Corsi Clown – Elias Lindholm (31.85%) and the Flames top players did see a lot of special teams tonight. As such I would say having a lower possession rating but still an even quality of chance rating was doing the right things. Some players did have off nights, but it wasn’t enough to cause Calgary to blow it. The important thing here was Calgary having a line stand out and clearly control play against the Panthers. Having your top 4 D perform like top 4 D is always a help as well.
Under Pressure – 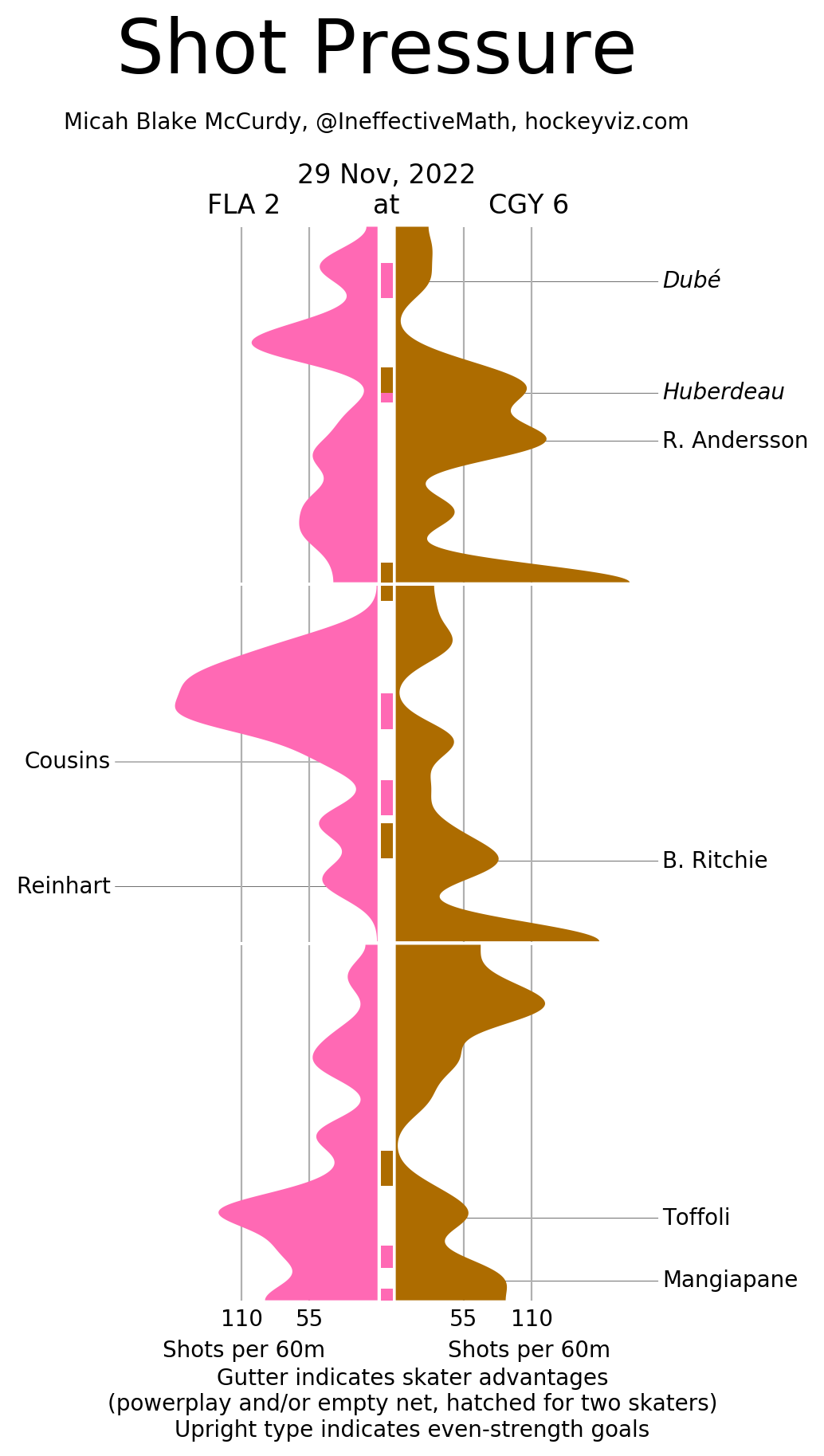 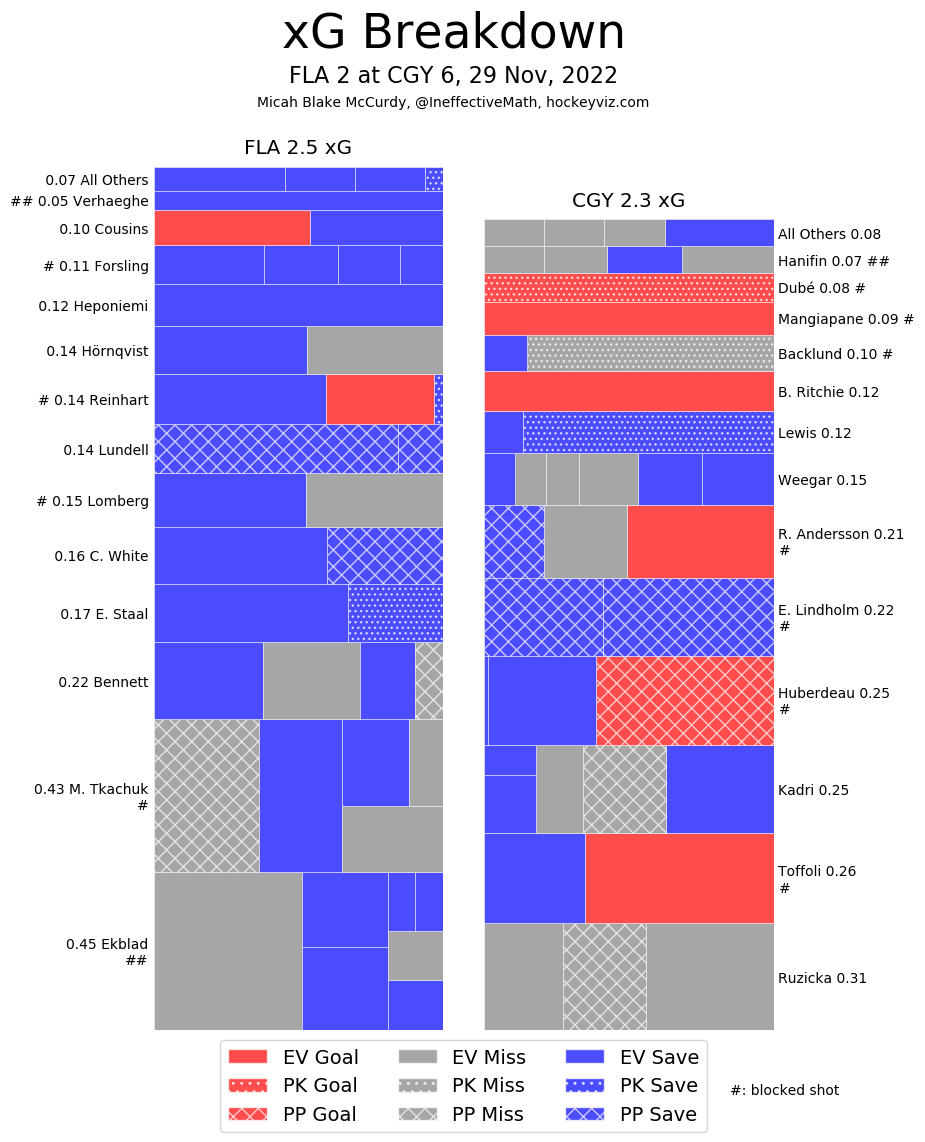 xGF% – Brett Ritchie (71.27%) leads with the Blasty Bros. Dubé (69.04%) and Mangiapane (69.04%) just behind. The Blasty Bros. club is based on vibes alone and has included other goal scorer Rasmus Andersson (54.41%) as well. The only thing that clearly did not work was the pairing of Zadorov (22.60%) and Stone (21.75%). I’d give it more than a couple games but that will need adjusted if not fixed after a few games. Zadorov has been one of the better Flames to date this year, he’s earned a better shot than the first demotion when things get stagnant.
Game Flow – 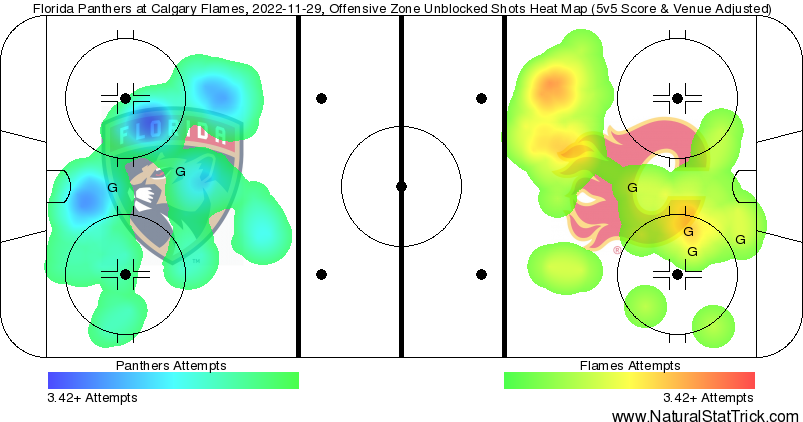 In The Crease – 1.72 expected goals against with one high danger goal against and one medium danger one he’ll want back. Regardless Vladar didn’t let anything more than what’s necessary in and made big stops to maintain the lead. Calgary only had a 2 goal lead until the last little bit where the Panthers just threw in the towel and stopped trying with 3 minutes to go. Vladar has played well – more starts for him have also been earned.
Player Spotlight – MacKenzie Weegar – Huberdeau himself gathers a lot of the attention, and he put on another great performance himself, but because of that Weegar gets left in the background. No matter who he plays with and on which side he plays, night in and out, he plays above average or better. He is like Tanev in the fact that nothing ever gets in his way of playing top tier at all scores. This was one heck of a player and he’s got 8.3/4’s seasons left on his deal.
The Goals –
Flashalytic’s 3 Stars –
1) Dillon Dubé
2) Dan Vladar
3) Andrew Mangiapane
The Flames are back in action on Thursday when they host the Montreal Canadiens.
(Stats compiled from Naturalstattrick.com // Game Score from Hockeystatcards.com // xG and Under Pressure charts from HockeyViz.com // Game Flow and Shot Heatmap from NaturalStatTrick.com)
Editorials
Recent articles from Shane Stevenson