Beyond The Boxscore: Youthful Calgary Flames lineup shut out in Seattle 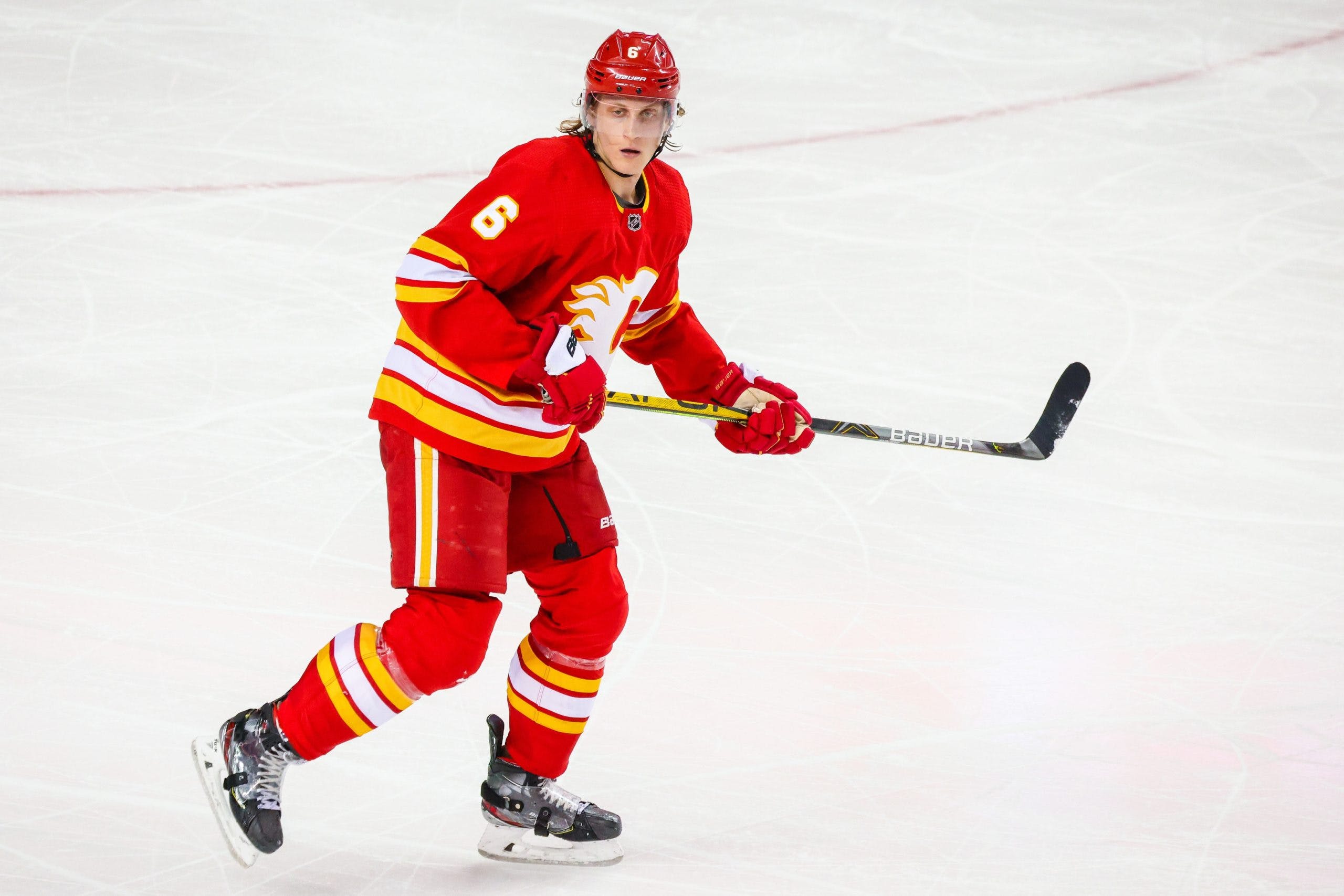 By Shane Stevenson
2 months ago
Welcome back one and all to Beyond the Boxscore: Season 2 –  a place to find out which Flames players had statistically great nights combined with some insight into what was working or not by myself (Shane Stevenson – @Flash_33 on Twitter). We’ll have charts, video breakdowns, colour commentary, and plenty of in-depth analysis.
It wasn’t a night where anything crazy happened, that’s for sure. The Flames sent a prospect heavy squad with some young NHLers and the PTO forwards for this pre-season tilt in Seattle. The Kraken – on the other hand – tested out some veterans and some high end prospects (Wright, Firkus). It was a good night to see if any of the young players fighting for a roster spot would raise their level of play to stand above the crowd. Some players definitely stood out – though not in the best way. Still early in the pre-season yet, lots of time to get more views in.
CF% – 46.33%, SCF% – 46.78%, HDCF% – 38.01%, xGF% – (tracking error)
It’s a Team Game – The start of the game had shades of proper NHL structure. A forward heavy on the forecheck with the support trying to force the defender to pass up the middle through the neutral zone. It lasted for a while but eventually disappeared, being replaced with a lighter forecheck that allowed the Kraken to find better passing lanes. There was quite an extensive amount of passing errors in this one, as people are still learning where everyone plays. The Wranglers are getting an influx of new players too – guys are still getting acclimated.
Corsi King – Dennis Gilbert (64.38 CF%) led all skaters, with only 5 total finishing with ratios above 50%. Ben Jones (61.75%), Cole Schwindt (60.82%), Nick DeSimone (59.43%), and Alex Gallant (56.93%) all with positives in the attempts department. DeSimone has had 2 straight games where he’s played really well. An AHL veteran DeSimone will be entering his sixth pro season – it’s been nice to see him being able to stand out for a couple games. Nothing crazy, just a solid couple outings.
Corsi Clown – The guy with the biggest difference was Juuso Valimaki (24.91 CF%). It wasn’t only that he had the biggest difference between his attempts for vs. against, he had the most corsi events against amongst all skaters – tied at 14 with Cody Eakin (34.68%) and Walker Duehr (42.80%). You can say he was left to dry on the 2-on-1, but results like this have to build over the course of the entire game. It wasn’t just one play here or there it was a lot of time spent playing in the Flames own zone.
Under Pressure – 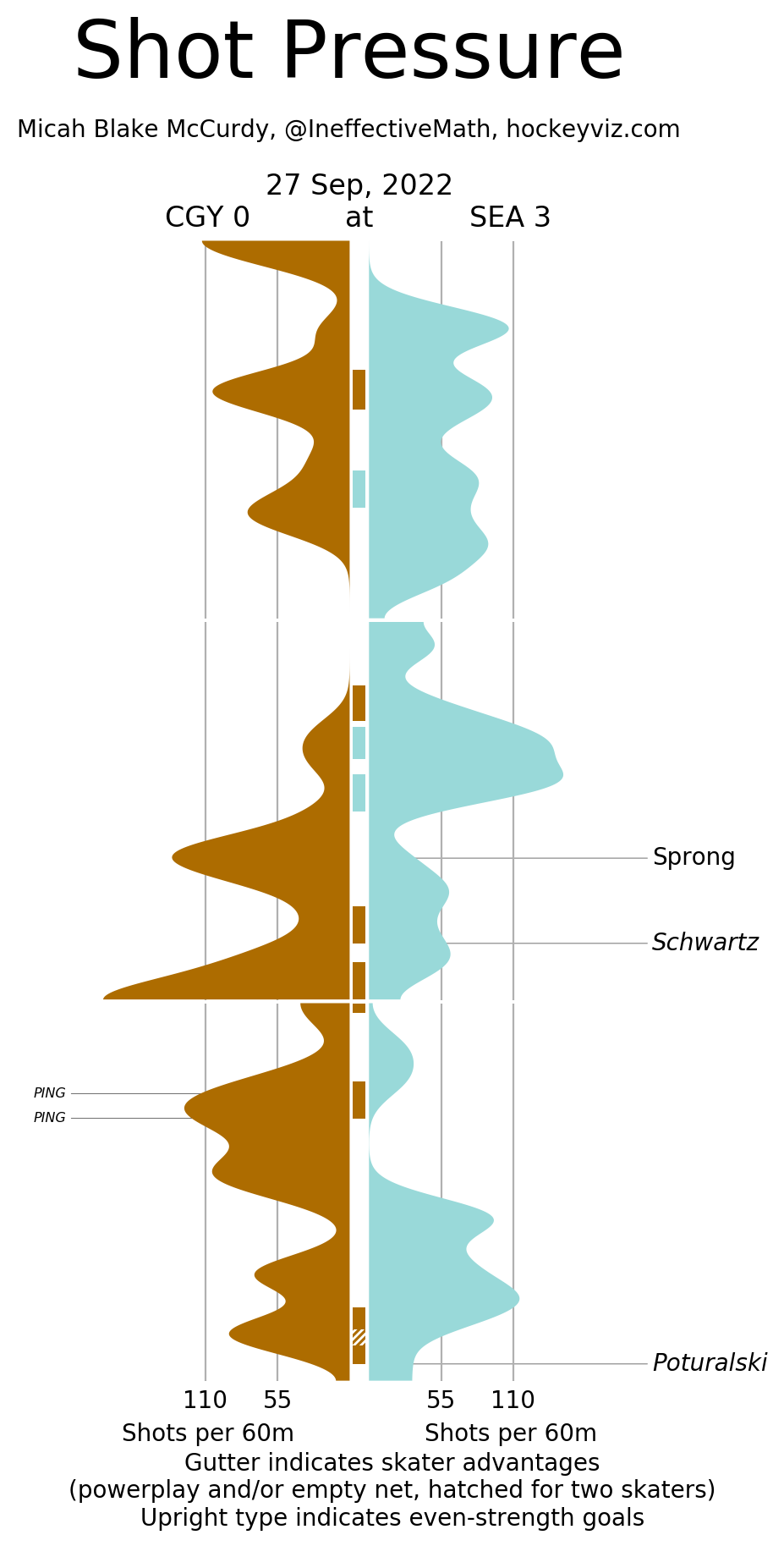 I should explain this on a little bit – the waves of the chart are pressure, the more shots a team gets in a short term span the more the wave spikes. When they go long stretches without a shot the wave recedes to the center. This shows that Calgary had trouble generating chances off the hop, but eventually corrected themselves and were able to up their attacking pressure.
Taken By Chance – With the xG model not working the last couple of games I put the scoring chance numbers with a bit of an asterisk – just in case maybe the shot tracking has been off. I do use SVA (Score and Venue Adjusted) statistics to account for arena bias, but this is more than likely just a random pre-season error. Anyways 5 guys ended up getting a 5v5 high danger scoring chance without seeing one go their way: Dennis Gilbert (75.63 SCF% // 100 HDCF%), Ben Jones (67.85% // 100%), Nick DeSimone (67.30% // 100%), Alex Gallant (66.37% // 100%), and Adam Klapka (100% // 100%). If we highlight Klapka from that – he didn’t see an actual chance go on net, but he only finished with a 42.88 CF%. That means plenty of misses or blocked shots from him or his teammates while out there. Klapka has shown he’s good at getting in lanes and disrupting possible stretch passes up the middle. I do have to mention a pair of defenders let 6 high danger chances against them at 5v5 – Valimaki (33.56% // 26.67%) and Yan Kuznetsov (38.96% // 26.67%).
xG Breakdown – 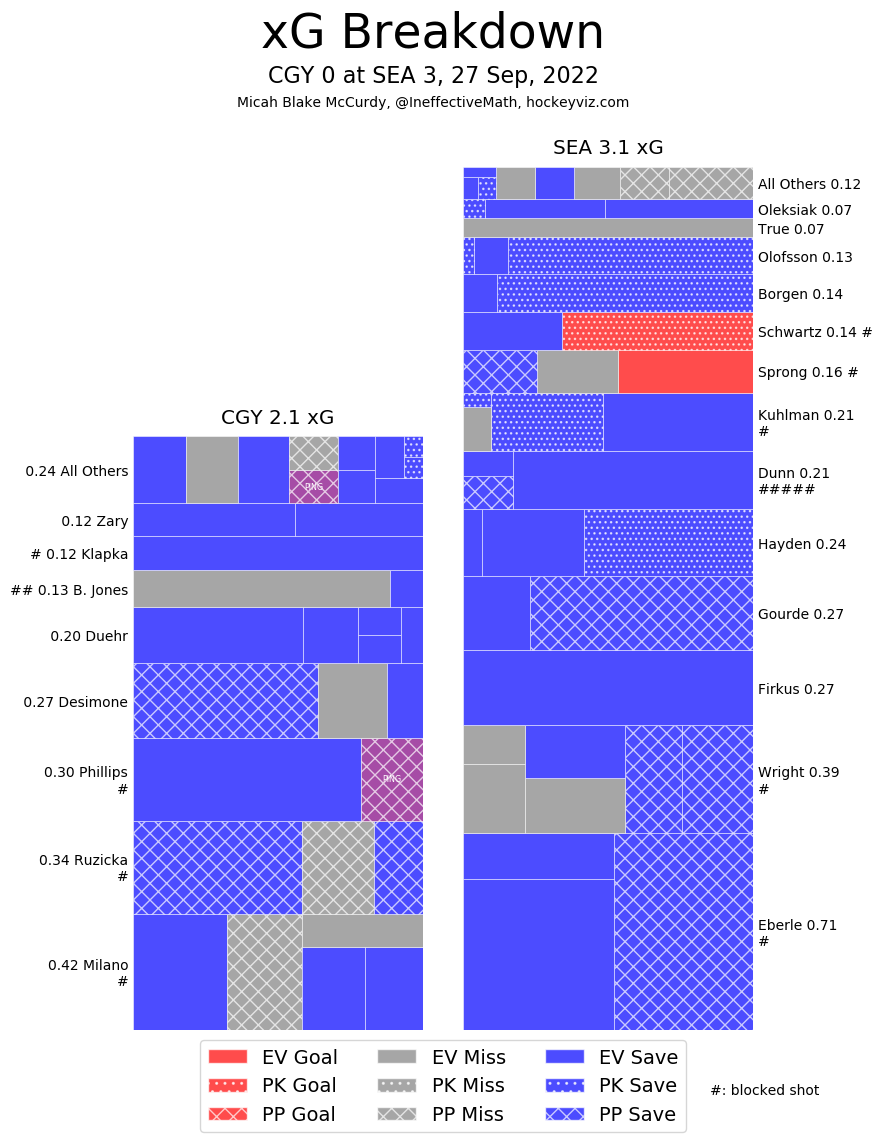 Who was involved in the most dangerous chances of the night? This tells us with sizes of boxes and overall quality addition.
xGF% – (Not available for this game due to unknown error)
Game Flow – Not Available via tracking error
Game Score – With no goals being scored nobody really stands out. Last year we usually discussed impact players – the guys who got over 2.00 in the match. Tonight the top spot was Cody Eakin (0.56) despite some very questionable breakout passing in the first period. He wasn’t the only one to try and go across the entire ice with a breakout pass, but he did do it twice. There were still overall positioning errors on the breakout – but as we touched on earlier that should still be expected this early into training camp.
Shot Heatmap – 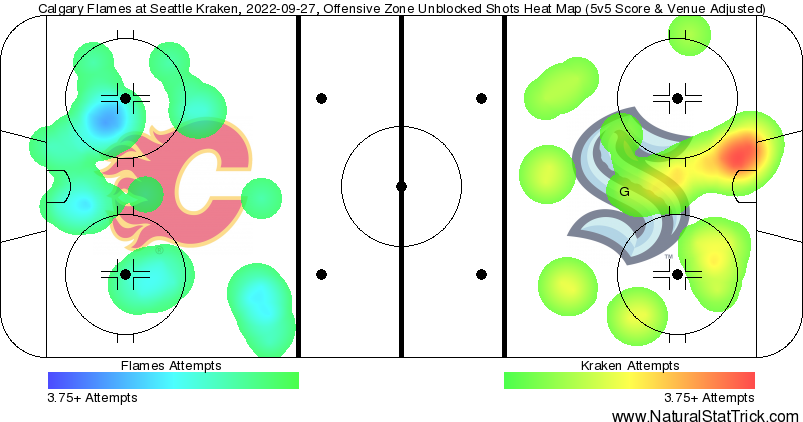 In The Crease – The numbers for the goalies are being wonky too, but we don’t need them to talk about how Dan Vladar was solid. The Flames were out high-danger chanced 6 to nothing in the first and Vladar left that period with a blank slate. He’s stopped 47 of 49 shots through 100 minutes of game action – no need for a break-in period for him.
Today’s Specials – The shorthanded goal against – a complete non-factor. That is not even close to what the main power play units are going to be during the regular season. Did some players appear more confident on the power play – yes. Should they play with that confidence at 5v5 too – we sure hope. Sonny Milano looked like he could be a smart fit on the second unit should he earn a contract, that was about it.
Player Spotlight – Nicolas Meloche – he’s on a one-way deal and has played adequately in the 2 games so far. He’s going to be given a shot to prove what he has – the right-handed shot could give him an inside edge if he plays smart defence first hockey. He’s not a step slow by any means, has been in the right spots, and has played with a calm demeanour. Don’t count him out for a roster spot too early – he’s outplayed some direct competition in game situations so far. I don’t have visuals for what’s happening in practice – those are closed outside of credentialled media members to start this season.
The Goals – Good short list today
Flashalytic’s 3 Stars –
1) Dan Vladar
2) Nick DeSimone
3) Cole Schwindt
The next Flames action is Wednesday night at home against the Oilers pre-season squad.
(Stats compiled from Naturalstattrick.com // Game Score from Hockeystatcards.com // xG and Under Pressure charts from HockeyViz.com // Game Flow and Shot Heatmap from NaturalStatTrick.com)
News
Recent articles from Shane Stevenson