Under Darryl Sutter, the Calgary Flames have embraced a puck possession game 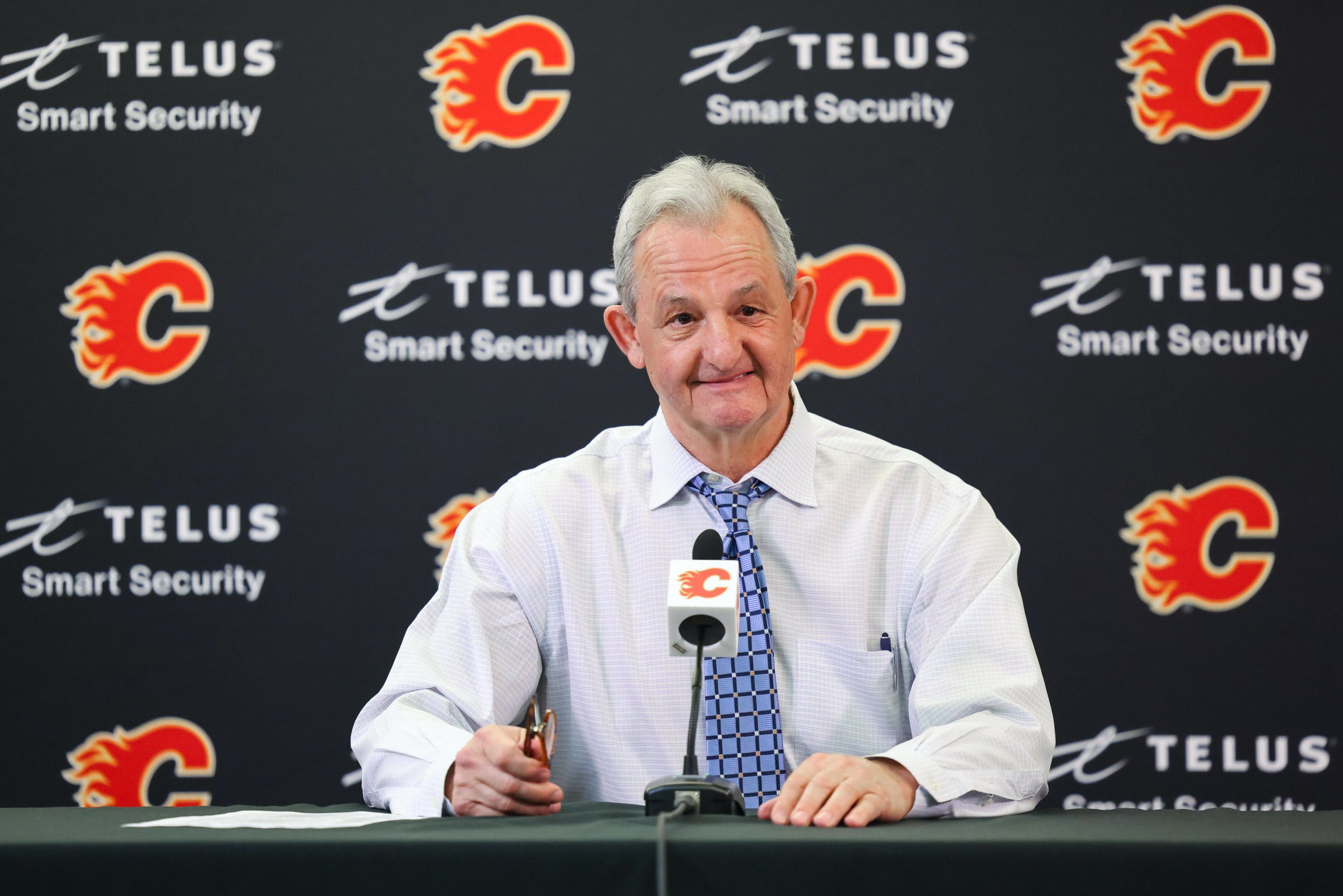 By Ryan Pike
9 months ago
The Calgary Flames likely won’t win the William M. Jennings Trophy this season, annually bestowed upon the goaltenders on the team that allows the fewest goals against – odds are, Carolina or the Rangers will get that award. But the Flames have emerged as one of the stingiest defensive teams in hockey after being very much not that last season.
Speaking to the media following Sunday’s practice, head coach Darryl Sutter explained how the Flames became such a tight-checking group.
First and foremost, Sutter noted that cutting down goals against was something the team needed to do in order to return to the playoffs.
“I think it was one of our… Not one of our, it was the primary goal to becoming a playoff team, was getting that cut down,” said Sutter. “That’s a pretty broad spectrum, when you say Jennings or goals against. A lot more goes into that. Starting with possession, number one. I think it was a big adjustment the team had to make, and they’ve done a good job.”
Sutter explained that the team’s system has to be built around the players and skill-sets they have available. So after free agency and expansion, a plan was sketched out based upon the players they had available and they implemented that plan during training camp and early in the season. (It wasn’t explicitly stated, but if you’re wondering why the Flames kept fairly clear-cut NHL and non-NHL groups during camp, implementing the new system is probably one of the major reasons.)
“A lot of the players that were brought in here were guys that have had some success,” said Sutter. “And the way that you have success is that way: through your checking and your puck possession. Then you start shooting real bullets and see how it goes.”
Asked what the team needed to change in order to become a possession team, Sutter mused that there were several things, but singled out their ability to play with pace as a major one.
“Number one thing, this team had to learn to play was with some pace,” said Sutter. “We were too slow a team. Everybody else was fast, we were slow. And it was not based on personnel, it was based on that’s how they wanted to play. And the league changed a lot and the team didn’t. The league went to a direct, hard game where this team was still playing a slow-it-down, stretch-it-down. So it doesn’t work. Especially the time it doesn’t work at all is playoff time. There’s a lot more activity and it’s hard to play that at playoff time if you’ve never played it. Especially if it’s ingrained in guys for a number of years. It’s hard to break that.”
When you dig into the underlying numbers from places like Natural Stat Trick, you can see that the Flames made some minor defensive adjustments but their focus on checking and playing with pace led to really big offensive improvements.
Here’s a quick glance at the percentage changes from the entirety of 2020-21 (including Sutter’s 30 games) and the 2021-22 season for the Flames. (Via Natural Stat Trick.)
(Corsi is all pucks towards the net; Fenwick is unblocked shots towards the net; shots is all shots that hit the net; expected goals, scoring chances and high-danger chances are based upon shot type and location.)
Aside from expected goals, the Flames have allowed a little bit more pucks towards the net than in 2020-21. But man, they have seen really significant per-game increases in their own outputs.
In terms of shot quality, here’s the same comparison.
In our earlier breakdown of Sutter’s coaching impacts, we showcased that the Flames became a really stingy defensive bunch in the 30 games after his arrival in 2020-21 but also didn’t generate much offensively. This season, with a full summer to prepare a plan and a full camp to implement it, the Flames have retained that defensive focus but paired it with a voracious attack in the offensive zone.
Rather than become a defensive shell that relies on counter-punch offense, the Flames have embraced an aggressive checking mindset in all three zones.
As a result, they’ve cut down their five-on-five goals against per 60 by 10.3% and increased their five-on-five goals for 60 by 19.0%. They’re one of the stingiest defensive teams in hockey (with third lowest all-situations goals against average in the game), and one of the most dangerous offensive teams in the game as well (with the sixth highest all-situations goals for average league-wide).
Sutter mused that the previous incarnation of the club had a “relief system” rather than a “belief system.” They were relieved that they won, rather than believing that they’d win and getting the expected result. The emergence of belief is, aside from the Xs and Os of the checking system, arguably the biggest change for the Flames over the past year.
And it’s why they’re heading into the 2022 Stanley Cup playoffs with some swagger. And, dare we say it, some belief.