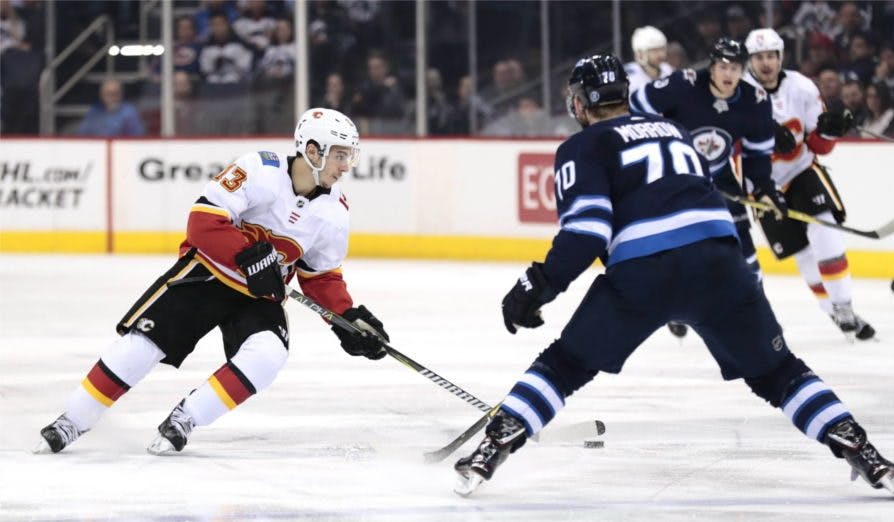 By Ryan Pike
1 year ago
For the first time since early February, the Calgary Flames (15-16-3, 33 points) are playing against the Winnipeg Jets (20-11-2, 42 points) once again! Since they last met, the Jets have pushed their way up to the top of the (Scotia NHL) North Division standings, while the Flames have slid. With their post-season hopes flagging, the Flames desperately need a win. Or two. Or three.
The action starts at 8 p.m. MT on Sportsnet West and Sportsnet 960 The Fan! It’s the first of three games between these teams in the next four nights!
For a view from the other side, check out our frenemies over at JetsNation!

Projected lines, via Daily Faceoff:
Gaudreau – Monahan – Lindholm
Tkachuk – Backlund – Mangiapane
Lucic – Bennett – Dube
Nordstrom – Ryan – Leivo
Giordano – Andersson
Hanifin – Tanev
Valimaki – Nesterov
Jacob Markstrom starts for the Flames, backed up by David Rittich. It looks like Joakim Nordstrom returns to the lineup after missing nine games, so he likely replaces Zac Rinaldo on the fourth line, with Brett Ritchie remaining out with his injury. The taxi squad is Louis Domingue, Michael Stone, Alex Petrovic, Buddy Robinson, Oliver Kylington and Dominik Simon.
After getting off to a nice start under new/old head coach Darryl Sutter, winning their first three outings, the Flames have crashed down to Earth a bit with losses in four of their last five games. They’re playing better structural hockey, but defensive gaffes are ending up in their net and combined with their offense drying up a bit… it’s making it tough to win.
Simply put: the Flames would love to have an offensive outburst this weekend, and need one if they’re going to stay mathematically alive in the playoff race for much longer.

Projected lines, via Daily Faceoff:
Stastny – Scheifele – Wheeler
Connor – Dubois – Ehlers
Copp – Lowry – Appleton
Perreault – Thompson – Lewis
Morrissey – Poolman
Forbort – Pionk
Stanley – DeMelo
Connor Hellebuyck starts for the Jets, backed up by Laurent Brossoit. The active extras are Jansen Harkins and Sami Niku. The taxi squad is Eric Comrie, Nelson Nogier, Ville Heinola, Joona Luota and Dominic Toninato.
The Jets just keep chugging along. Are they spectacular? Nope! But they’ve been a consistent team for much of the season, using a superb power play to cover up for some fairly blah five-on-five play and production. It’s basically a template for how to be successful in the NHL: play good enough at even strength and hope your special teams can put you over the top.

The Flames are without Joakim Nordstrom and Brett Ritchie, but both are on the active roster and close to returning. (Nordstrom could return tonight.)
The Jets are without Bryan Little and Nathan Beaulieu.

The Flames have won two of their first five games with the Jets, capturing five of a possible 10 points in the process. (One of their three losses was in overtime.) They’ll play tonight, Saturday and Monday, and then finish off their season series on May 5 in Calgary.