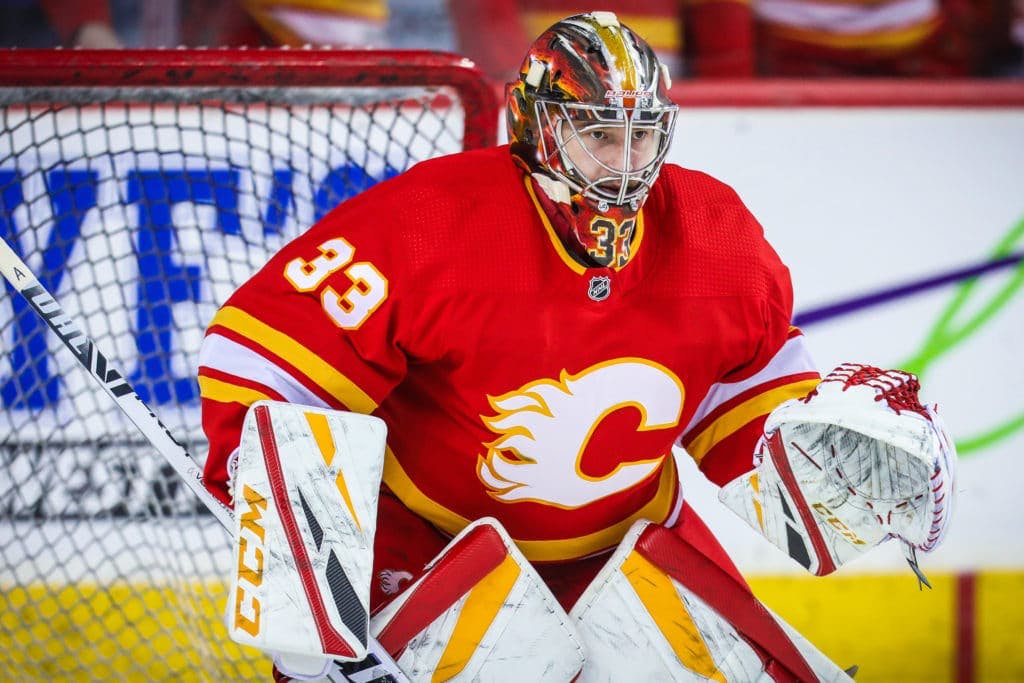 By Ryan Pike
1 year ago
Just 24 hours after their last meeting, the Calgary Flames (4-3-1, 9 points) face off against the Winnipeg Jets (5-3-1, 11 points) in another crucial North Division clash! The Flames can draw even within the divisional race with a regulation win, while the Jets are looking to bounce back from letting a lead slip away on Monday evening.
The action starts at 6 p.m. MT on Sportsnet West and Sportsnet 960 The Fan!
For a view from the other side, check out our frenemies over at JetsNation!

Projected lines, via Daily Faceoff:
Tkachuk – Lindholm – Dube
Gaudreau – Monahan – Mangiapane
Bennett – Backlund – Leivo
Lucic – Ryan – Nordstrom
Giordano – Andersson
Hanifin – Tanev
Valimaki – Nesterov
Geoff Ward didn’t provide any hints about his lineup on a back-to-back night. But we’re guessing David Rittich starts, backed up by Jacob Markstrom – Ward split up back-to-back starts every time last season. Update: Rittich starts.
Beyond that, who knows? The extra players on the trip are Dominik Simon, Buddy Robinson, and the taxi squad of Louis Domingue, Connor Mackey, Oliver Kylington, Michael Stone and Zac Rinaldo.
The Flames were awesome at five-on-five for two periods last night and probably deserved a regulation win. Can they avoid a let-down in the first period tonight and come out of the gates strong? If they can, they’ll be well on their way to another win.
Noah Hanifin and Chris Tanev have yet to allow an even strength goal against through eight outings, tops in the NHL (by a fair margin) among defensive pairings.

Projected lines, via Daily Faceoff:
Copp – Scheifele – Ehlers
Connor – Stastny – Wheeler
Perreault – Lowry – Appleton
Vesalainen – Harkins – Lewis
Morrissey – Demelo
Forbort – Pionk
Stanley – Beaulieu
Laurent Brossoit is confirmed as Winnipeg’s starter, backed up by Connor Hellebuyck. Beyond that, who knows? Their extras are Anton Forsberg, Sami Niku and David Gustafsson. Their taxi squad is Ville Heinola, Dylan Samberg, Cole Perfetti and Nelson Nogier. Pierre-Luc Dubois remains unavailable as he works through the mandated quarantine after crossing the border.
The Jets need to be better at five-on-five, as they were dominated by the Flames for two periods last night.

If you peruse most standings projections, it becomes apparent that 65 points probably gets you into the playoffs. That’s a 32-23-1 record, or thereabouts, or a .580 points percentage.
The Flames have a 4-3-1 record and nine points. To hit 65 points, they need 56 points in their remaining 48 games – the equivalent of a .583 points percentage.

The Flames are healthy.
The Jets are without Bryan Little, Dominic Toninato and Nate Thompson. Pierre-Luc Dubois is on the COVID-19 unavailable list due to quarantine regulations, while Tucker Poolman is considered a non-roster player as he works back to game action after spending some time on the unavailable list.

The Flames won 4-3 in a shootout yesterday.