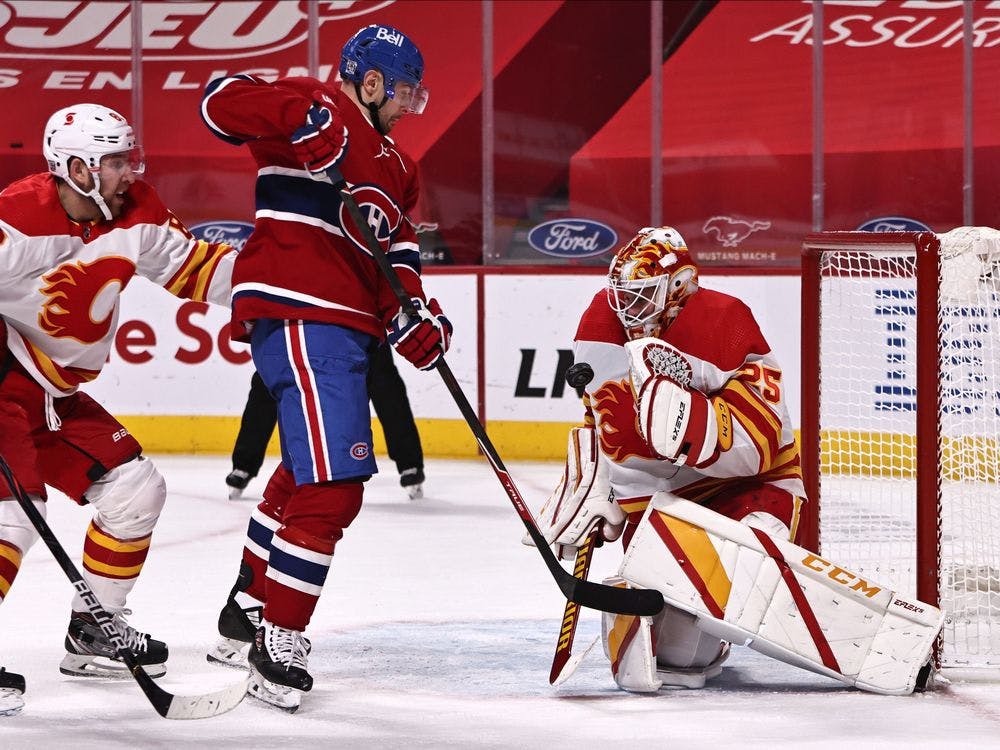 By Mike Gould
1 year ago
A win, believe it or not, is a win.
Coming off three consecutive losses at the hands of the Toronto Maple Leafs (twice!) and the Montreal Canadiens, the Calgary Flames entered their Saturday night rematch with le bleu, blanc, et rouge in desperate need of a win.
37 saves later, the Flames are out of the rouge and back at a .500 points percentage.
No two players had more of an impact on Saturday’s game than Jacob Markstrom and Jake Allen. The two goaltenders engaged in a tremendous battle but the Flames’ keeper basically had the upper hand from the start.
After an early penalty by former Flame Brett Kulak, Johnny Gaudreau sniped the game’s opening goal on the ensuing power play to give his team, and his goaltender, a one-goal cushion.
From there, Markstrom had to be sharp. The Flames played well in the first period but really struggled in the second, being outshot 15-5 and taking three penalties. They received three power play opportunities of their own but did very little with them.
At even strength, the Flames generated 0.04 expected goals’ worth of chances in the second period. The Canadiens generated 0.80 of their own—20 times as much offence. It was rough, but Jacob Markstrom was perfect.
The third period was much closer and the Flames can look back on this game happy with their performances in the book-end frames. Still, despite the shutout result, this game was hardly a Picasso for Geoff Ward’s team.

After a three-game absence with an injury, winger Dillon Dube made his return to the Flames’ lineup on Saturday. His highly-anticipated return reunited him with Matthew Tkachuk and Elias Lindholm on the first line.
The result? The Flames’ top unit had its worst game of the season with all three members posting very poor results at both ends.
Shot attempt and expected goal figures (from Natural Stat Trick) for members of the Flames’ top line on Saturday
All three players fought the puck at even strength all night and failed to generate much of anything in the offensive zone.
Of course, because hockey is weird, Lindholm was the only Flame to score multiple points in the game. One of them was an assist on the power play goal and the other one came when he set up Mikael Backlund’s empty-netter. Still, points are points.
Tkachuk also assisted on Gaudreau’s power play goal. Meanwhile, Dube stood out on Saturday for a less fun reason.
Hits like this should be met with consequences. Dube had plenty of time to avoid making Jesperi Kotkaniemi’s head his principal point of contact. Hopefully, Kotkaniemi is none the worse for wear after the collision; Dube could receive a call about this reckless hit from the NHL’s Department of Player Safety.
If Dube is in the lineup for the Flames’ next game and stays on the top unit, it will be interesting to see if he and his linemates can return to controlling play as they did prior to his injury.

A new top pair in town?

On Saturday, Mark Giordano played his 900th game in the National Hockey League. It’s a tremendous achievement for any player but especially for one who went undrafted into the NHL and even the Ontario Hockey League.
Now just 100 games away from the millennium milestone, the Flames’ captain might be in the midst of a transition to a lesser role on the team. Few 37-year-olds can put up anything resembling a fight against age-based regression; it’s impressive that Giordano remains a largely trustworthy pillar on the point.
Giordano has been a top-pairing defenseman for the Flames for nearly a decade and won the Norris Trophy in 2019 as the league’s best defenseman. However, his play in the first seven games of the 2020-21 season, coupled with the excellent showings of Chris Tanev and Noah Hanifin, could be leading to a changing of the guard in Calgary.
Simply put, Giordano’s pair with Rasmus Andersson has not been effective this year. The two rearguards had especially poor showings on Saturday, with the pair seeing over 1.50 expected goals’ worth of chances against when they were on the ice at even strength. Meanwhile, the Hanifin-Tanev pairing was on the ice for far fewer chances while playing four additional minutes at even strength.
Tanev has been a calm, steady presence on the Flames’ blue line and Hanifin looks to be playing with more confidence. If the Giordano-Andersson pair can rebound—which seems reasonably likely, given the history of the two players—the Flames could boast one of the better top-fours on defence in the league.
Until then, Hanifin and Tanev will likely remain the Flames’ most effective defensemen. They should be deployed as such.