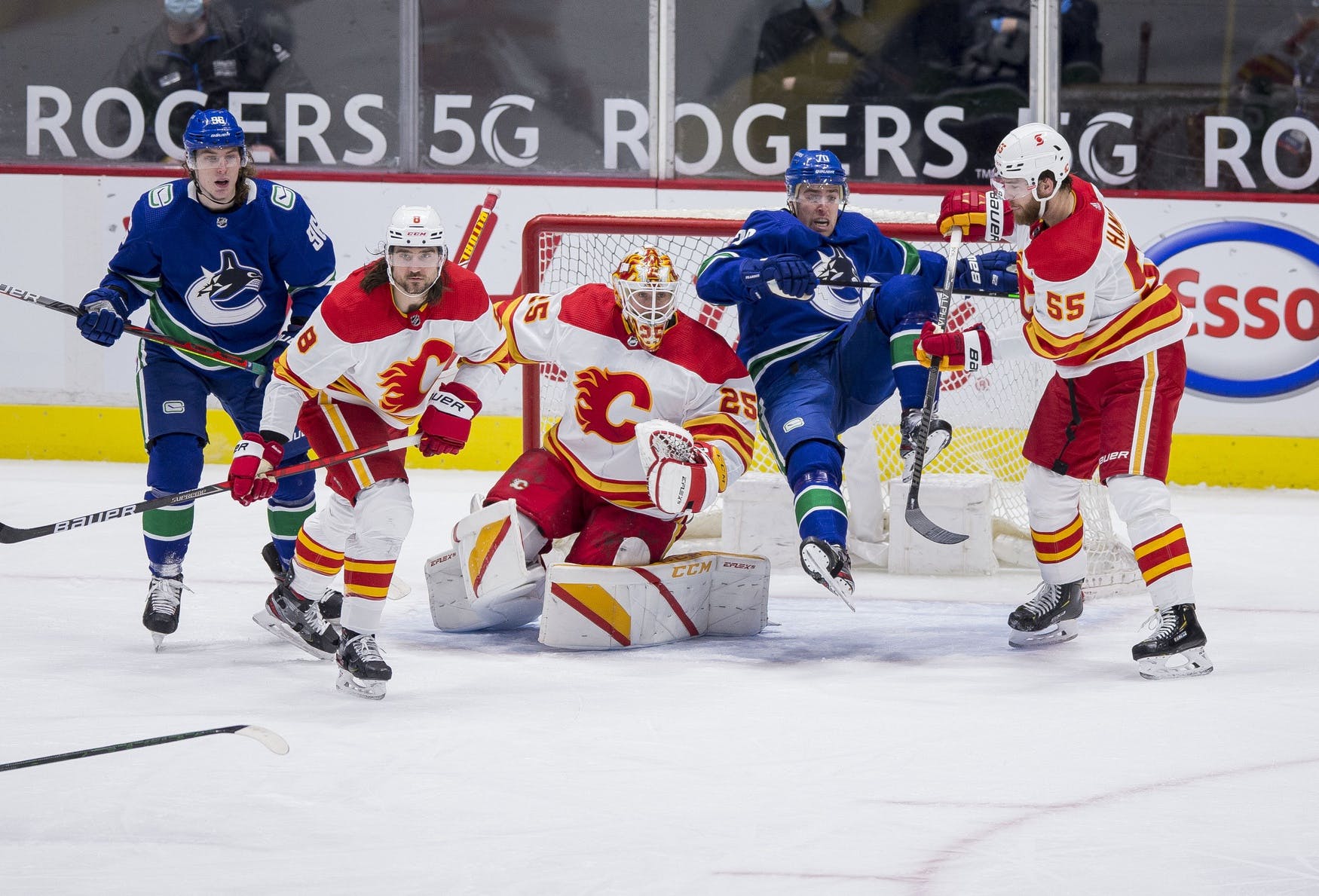 By Ryan Pike
1 year ago
The Calgary Flames’ season is over and done with, and now it’s time to poke at the aftermath a bit. We’ve been tracking the Flames season through seven game segments, and on the whole a few interesting trends emerged along the way.
Let’s dive in, pals!
Underlying numbers via Natural Stat Trick.

(Percentage stats in this table are 5v5.)
Early-on, the Flames were okay. They were .500 in their first segment and probably deserved to be. After a weird second segment – they had middling possession numbers but good “meaningful” possession numbers (meaning they had the puck a little but did good stuff with it) – they cratered entirely in the third segment.
The fourth segment featured both an improvement overall and the coaching change. In four full segments under Darryl Sutter, there was pretty consistent improvement across everything we tracked possession-wise. Their power play remained fairly blah, though, and was out-scored by the opposition power-play over the final four segments by a 16-11 margin.
All-told, the Flames won four segments, tied one, and lost three outright.

Let’s take a look at the average game score of each forward, broken down by seven game segments. As noted, the coaching change was in Segment 22-28, and the final four segments were all under Sutter.
General trends? Well, some players performed very consistently. Elias Lindholm is arguably their most consistent performer, because he seemed to avoid the gigantic drops in performance that some of his other teammates had this season in segments. Matthew Tkachuk and Johnny Gaudreau were arguably better players with better performance peaks, but Lindholm performed at a pretty high level all year.
Based on this comparison, Andrew Mangiapane is going to get paid next summer. He was arguably Calgary’s best five-on-five player, narrowly beating out Gaudreau for the primary point scoring title, and he was basically a winger version of Lindholm (with marginally lower game score production).
Several players saw nice game score jumps after the transition to Sutter. Among them were Dillon Dube, Joakim Nordstrom, Josh Leivo, Milan Lucic and Sam Bennett. (Bennett’s strong close to the season under Sutter arguably contributed to the Flames getting a pretty good return for him at the trade deadline.) Monahan’s score dipped quite a bit under Sutter, but that also corresponds with what we’re told his injury timeline would’ve been.

Here are the blueliner game scores, similarly displayed segment by segment.
Chris Tanev was superb all season and seemed to find another gear when (a) Noah Hanifin was injured and (b) he had broken ribs. Hanifin was also really good before he was injured.
The big surprises here are Michael Stone and Rasmus Andersson. Andersson played with Giordano and wasn’t great, and then with Hanifin and wasn’t great, and then with Nikita Nesterov and wasn’t great. Meanwhile, Stone was Mr. Reliable as a third pairing, right shot defender. The ceiling on Stone is pretty low – he’s destined to be a third pairing veteran until he retires, probably – but he stepped in and gave the Flames rock-solid minutes.

Here are the goalies, presented segment-by-segment by their average Goals Saved Above Average.
Goaltending was kind of all over the place this season, as Markstrom started very well and then petered out. How much of that was him working through things and how much of that was the team in general looking defensively incoherent before the coaching change, it’s hard to tell. Markstrom also missed some time with a concussion suffered mid-season, and it’s also difficult to tell how that impacted him in the second half of the season.
Needless to say, the Flames would probably just like to forget this season from a goaltending perspective.
What were the biggest surprises and disappointments from this past season? Sound off in the comments!
Uncategorized
Recent articles from Ryan Pike