Flames Post-Game: The Flames beat the champs to begin their regular season 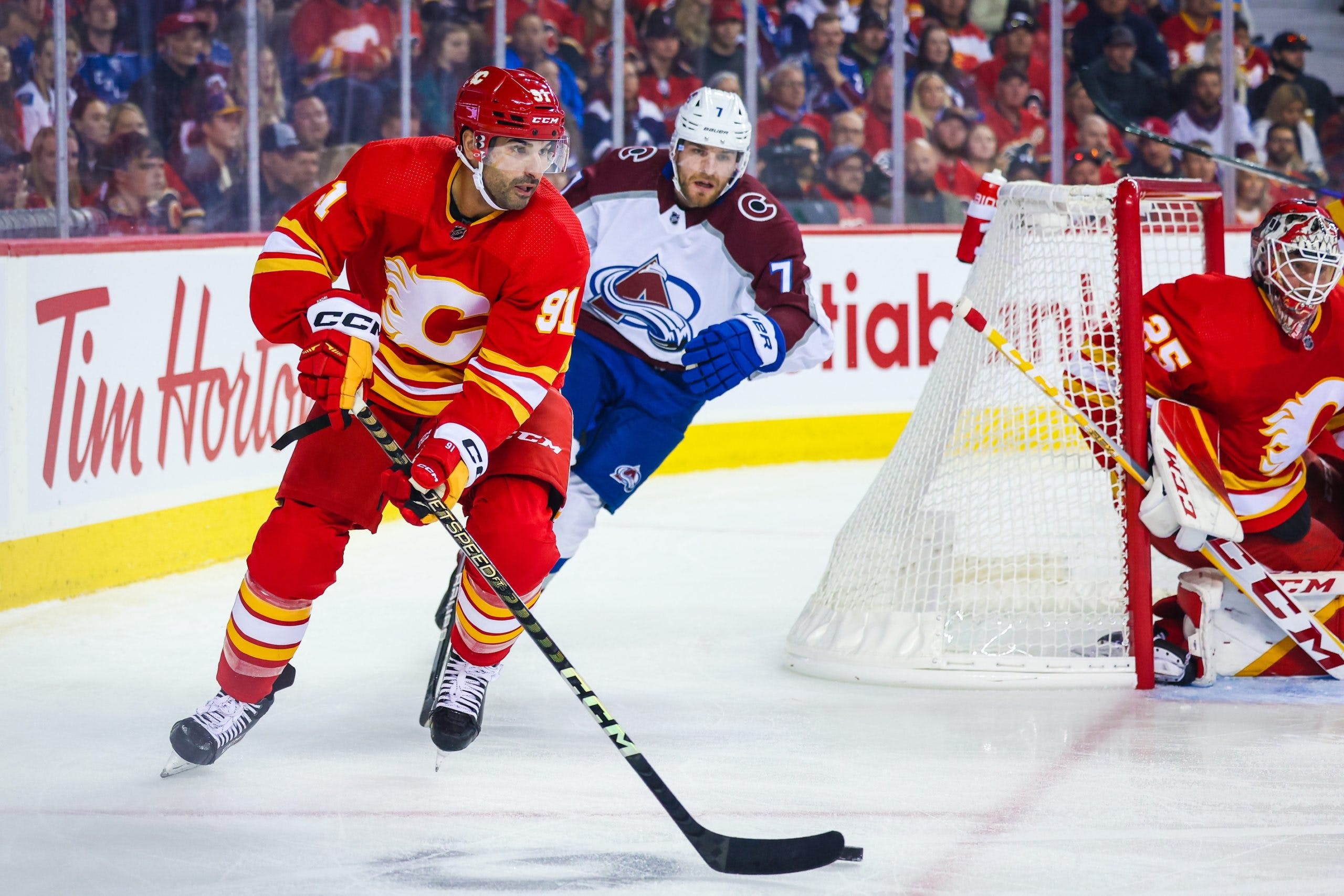 By Ryan Pike
3 months ago
The Calgary Flames finally began their 2022-23 season on Thursday night, hosting the defending Stanley Cup Champions, the Colorado Avalanche. It was not a perfect 60 minutes of hockey for the home side, but they took advantage of opportunities and defended well enough to collect a hard-fought two points.
The Flames won their first season-opener since 2009 via a 5-3 victory over Colorado, snapping a 12-season losing streak.

After all the excitement of the player introductions, the game got underway and… Colorado scored a weird goal on their very first shot on goal. After a couple off-setting penalties made it a four-on-four game, Bowen Byram pinched and drove the net. Rasmus Andersson poked-checked the puck off Byram’s stick, but the puck bounced and stayed with Byram, and he chipped the puck on net. It found a way through Jacob Markstrom and trickled into the net to give the Avalanche a 1-0 lead.
The Flames carried play for much of the first period, and cashed in to tie the game up midway through the frame. MacKenzie Weegar jumped into the rush and tried to chip the puck on net, but it bounced wide. But Milan Lucic chased down the rebound and in all the chaos, Brett Ritchie was left all by his lonesome in the slot. Lucic put a pass right onto his tape, and Ritchie beat Pavel Francouz to tie the game 1-1.
Shots were 14-3 Flames (13-2 Flames at five-on-five) and five-on-five scoring chances (via Natural Stat Trick) were 12-1 Flames, with the Flames having a 6-1 edge in high-danger chances.
Noah Hanifin got a holding penalty early in the second period, but it led to the Flames getting a couple nice shorthanded chances. One beat the goalie. First, Mikael Backlund’s shot attempt was deflected wide by a Colorado stick. But a minute and change later, Dillon Dube beat out the Avalanche for a puck in the neutral zone and raced into the Colorado zone on a two-on-one with Andrew Mangiapane (against Devon Toews). Dube opted to shoot, beating Francouz high stick-side to give the Flames a shorthanded goal and a 2-1 lead.
The Avalanche, down a goal, found their structure and pace and mounted a push. For a few shifts in a row, the Flames got caught in their own end, and Colorado used their speed to suppress Calgary’s breakout attempts. Eventually there was a trio of penalties – two to Calgary, one to Colorado – after a scrum, with Rasmus Andersson getting the extra penalty. The Flames prevented a Colorado power play goal, and MacKenzie Weegar found Andersson leaving the penalty box and sent him in on a breakaway. Andersson made a move to open up Francouz and beat him low to give the Flames a 3-1 advantage.
Shots were 9-8 Avalanche (8-6 Avalanche at five-on-five) and five-on-five scoring chances were 9-7 Flames, with the Avalanche having a 3-2 edge in high-danger chances.
The Flames opened the third period on the power play. The first unit got into the Colorado zone, moved the puck around really well, and eventually cashed in. Andersson fed Nazem Kadri on the right side of the zone, and Kadri’s slap-pass was deflected past Francouz by Tyler Toffoli to make it 4-1.
Toffoli drew a high-sticking penalty while scoring his goal. On the ensuing power play, more good puck movement led to Jonathan Huberdeau setting up Elias Lindholm with an A+ pass that gave Lindholm ages to get a good shot off. Lindholm’s resultant good shot beat Francouz to give the Flames a 5-1 lead.
Nathan MacKinnon responded 21 seconds later, though, blasting past all the players in red sweaters at the defensive blueline and beating Markstrom high glove-side to cut Calgary’s lead to 5-2. Later on, the Flames took a too-many-men bench minor and Valeri Nichushkin drove the net and beat Markstrom to cut the lead to 5-3.
The Avalanche pulled their goaltender for an extra attacker late, but both teams failed to score in that situation, and then Colorado took a late penalty, and so this game ended as a 5-3 Flames victory.

Did the Flames play a perfect three periods of ice hockey? Nope! At times they seemed a bit disorganized and disconnected, particularly on some of their breakout attempts in the second period. They got a bit jumpy and scrambly in their own zone from time to time, and it was up to their goaltender to calm things down.
But the Flames were playing a team that, while really talented and strong, were probably dealing with a bit of fatigue after their game in Chicago. The Flames did what they could to make life difficult for Colorado in key moments, and they relied on their depth to wear the Avalanche down a bit. They were able to defend well enough down the stretch to pick up the victory.
I’ll say this: the Flames earned the two points on Thursday and they were well-deserved, but I would love to see a game at mid-season between these two clubs at full strength and full rest. (Spoiler: There is one coming up in January.)

In his first game wearing a Flames jersey, Weegar was excellent. He was noticeable for the right reasons in all three zones, and his head’s up plays with the puck directly led to two goals. Not a bad introduction to Calgary.
That said, a lot of players on the home side had positive outings.

Mikael Backlund, Chris Tanev and Elias LIndholm served as alternate captains.
MacKenzie Weegar, Nazem Kadri and Jonathan Huberdeau all registered their first points with the Flames in their very first outings with the club.
During warm-up, the Flames all wore their usual jerseys, albeit with name-bars that didn’t quite match. Per Ryan Dittrick (of Flames.com), there’s a fun story behind it:

The Flames (1-0-0) are scheduled to practice on Friday, then they hit the road. They face the Edmonton Oilers on Saturday night in the late game on Hockey Night in Canada.
News
Recent articles from Ryan Pike