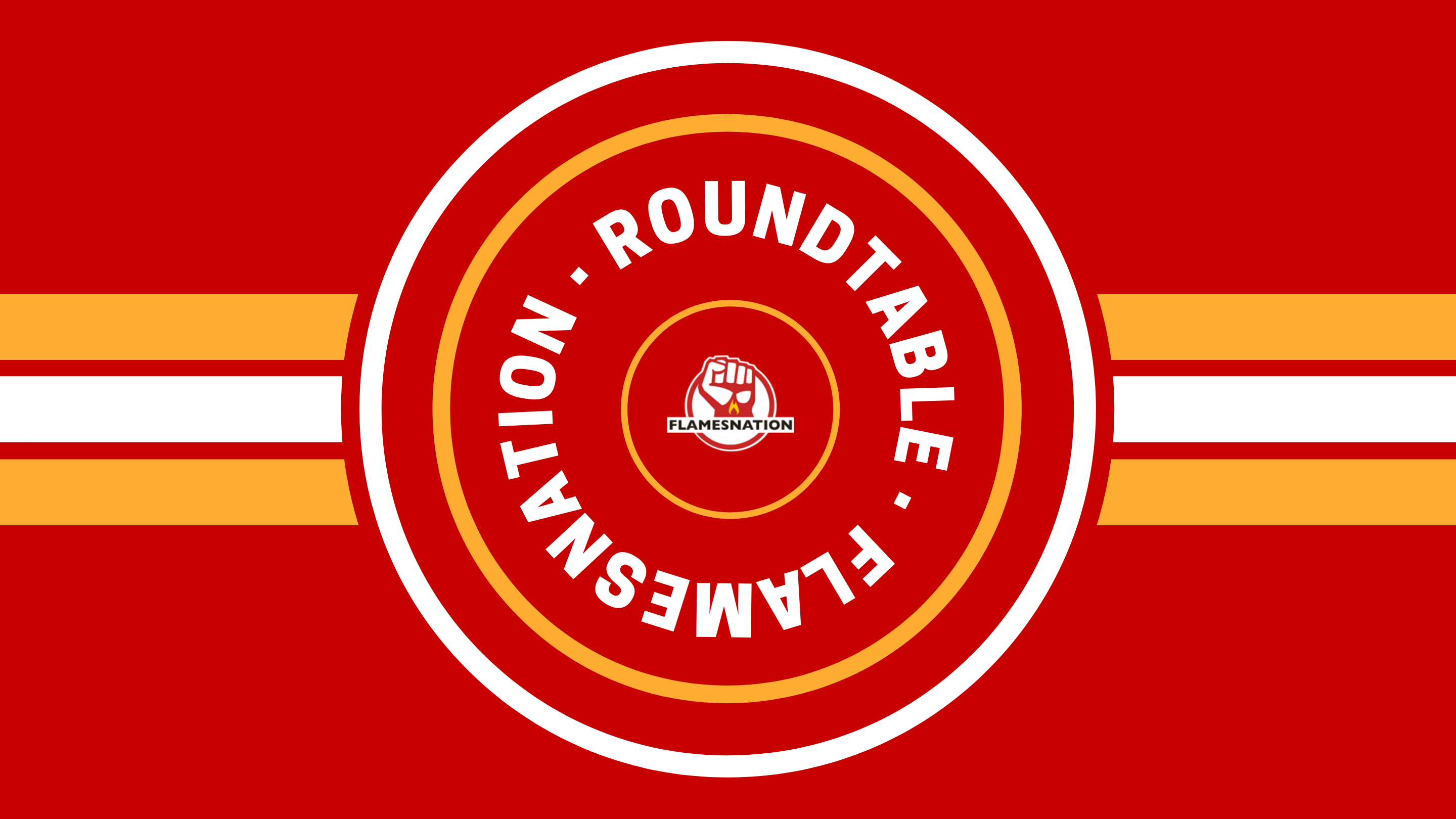 By Ryan Pike
1 year ago
After many days waiting and watching the rest of the league play games, the Calgary Flames are kicking off their 2021-22 season with a bang – a Battle of Alberta! To celebrate, we’ve convened our staff for a quick roundtable!

What makes you optimistic about the 2021-22 Flames?

Craig: A return to the Pacific Division. With the reintroduction of three rebuilding California teams into their schedule and and ultimate playoff race, the Flames have an opportunity to pile wins like bricks if they can seize it.
Mike G: There are plenty of small things. Maybe Andrew Mangiapane takes a step. Maybe Oliver Kylington can finally establish himself as a top-four guy. Maybe Jacob Markstrom returns to form and posts a .920 save percentage. Maybe Johnny Gaudreau and Matthew Tkachuk sign contract extensions during the season. There’s a future where all of these things happen and the Flames end up being really good. That would sure be nice.
Mike W: Is it counter-intuitive to be excited to watch Darryl Sutter hockey? The fact the Flames looked much stronger, specifically on the defensive side of things, after Sutter took over the club is reason enough for optimism. The Sutter Flames will likely be a high pressure, defensively smothering, forechecking machine. At best, this team should be a pain to deal with come playoff time… if they can get there.
Paige: What makes me optimistic about this upcoming season is Sean Monahan and Noah Hanifin getting the surgeries and recovering times they needed to hopefully return at 100% last year. I am also confident in the abilities of the long string of prospects the Flames have at their disposal this year with the Stockton Heat. If someone goes down, they have a solid list of players to call-up from.
Prajeya: I’m excited and optimistic to see the younger players further progress their game at the NHL level. Especially excited to see what Oliver Kylington and Dillon Dube are able to accomplish this upcoming season, with the former slated to get a lot more playing time this year.
Ryan: I think the addition of Blake Coleman will add a nice dimension to the top six that was previously missing, and potentially allow Matthew Tkachuk to pick his spots a bit more selectively when it comes to physical play.
Shane: The amount of proven goal scorers on the Flames gives me hope. There’s a lot of questions about where the offence will come from, but with Tkachuk, Gaudreau, Lindholm, Monahan, Mangiapane, Backlund and Coleman all having all scored at a 20 goal pace previously I’ve got faith that won’t be an issue.

What makes you pessimistic about the 2021-22 Flames?

Craig: The distinct possibility that the Flames did not plug the defensive leak left by Mark Giordano’s departure with enough patchwork. Brad Treliving traded and signed as best he could to address the issue, but asking a handful of bottom four defencemen to offset the loss of the captain is a lofty, lofty order.
Mike G: I don’t think they’re going to play Kylington very much at all. I suspect they likely won’t score very many goals — Blake Coleman is a nice add but he’s not going to be enough to turn the Flames into an offensive powerhouse. I fear Tkachuk will simply sign his one-year qualifying offer after the season, setting him up to walk directly to unrestricted free agency. I don’t think they’ll end up trading for Jack Eichel. Even worse, I think another team in the Pacific Division will get him — and he won’t cost very much. I fear Mark Giordano will be severely missed, and that Erik Gudbranson and Nikita Zadorov will very nearly sink the Flames’ defence corps all by themselves.
Mike W: That this year will be more of the same. The aforementioned Sutter factor provides cause for optimism but the fact is this is mostly the same group of players who have accomplished next to nothing over the last handful of years. The deck chairs have been rearranged but no substantial changes to the roster were made. The fact the Flames made lateral moves and are largely sticking with the same group of players, minus the team’s best defender, could equate to more of the same inconsistency and shortcomings we’ve seen for years.
Paige: What makes me pessimistic about this season is the “core shakeup” we all expected over the summer was pretty underwhelming. Changes were made like in any off-season, but my concern is not enough was done to make this team a Stanley Cup contender. The Flames lost a huge asset in Mark Giordano and I am not convinced that gap has been filled. They might prove me wrong however. Hopefully, they will use the full 82-game schedule to their advantage to at least put them in a strong position for playoffs.
Prajeya: I haven’t been too impressed with most of our new additions. I believe that we’ve gotten a lot slower as a team, with our bottom-6 getting much older and past it’s prime than years of the past. Daryl Sutter’s clearly had a large impact on this transition, which I’m personally not a huge fan of.
Ryan: The big thing is the lack of defensive depth, or more specifically top four depth. If one of the main three defensemen (Hanifin, Andersson or Tanev) get hurt, somebody (or a couple somebodies) are going to be playing above their skis and it might not be pretty.
Shane: The blueline, and not Hanifin or Tanev. Zadorov and Gudbranson had really bad showings in the pre-season and I hope if that continues into the season they’ll be held accountable for their play to the same level others are

Craig: Andrew Mangiapane wrestles his way into the top three Flames scorers this season. The feat will entail outproducing a top-liner with more favourable minutes, deployment and power play privileges, but that absolute hyena of a hockey player can get it done.
Mike G: They allow more than 250 goals.
Mike W: The Flames not only make the playoffs but advance to the Stanley Cup Finals where they lose to Tampa Bay.
Paige: The Flames play the entire season without a captain. Noah Hanifin leads defensive scoring. Andrew Mangiapane outscores Matthew Tkachuk.
Prajeya: I’m going to continue with my pessimistic line of thinking and make a BOLD prediction that the Flames finish bottom 10 in the league this year, kicking off the rebuild process.
Ryan: Johnny Gaudreau and Andrew Mangiapane both re-sign long-term deals before the All-Star Break.
Shane: I believe Andrew Mangiapane will lead the team in goals this season – and he’ll pot over 30.
Uncategorized
Recent articles from Ryan Pike