By Shane Stevenson
1 year ago
Free agency, a day of hope and dreams that usually ends with egregious over-payments and the blatant disregard for teams long term outlooks as half the league try to chase the (1) Stanley Cup that will be awarded in the upcoming season. It’s a day where you can sign the next Kyle Okposo, David Clarkson, David Bolland, James Neal, Brett Connolly, (okay i think you get the picture) and ride that wave of initial optimism right into the dark cloud forming around you. The old saying is – they pay you based on what you’ve already done, not what you’re going to do. Well if that’s true there’s a reason some teams rebuild for 10/15/20 years.
But I’m not here to discuss the rest of the league, no all of those writers/bloggers can worry about their respective teams on their own time – I’m here to discuss and dissect what Brad Treliving and co. have done with the Calgary Flames this off-season (so far).
Blake Coleman – RW/C/LW/Fry Cook – Shoots: Left – 5’ 11” 200 lbs – 29 y/o – 301gp – 71g – 55a – 126p – 2 Stanley Cups – 6 years x $4.9M
This isn’t your Michael Frolik, James Neal, Troy Brouwer deal of the past. The metrics on Coleman at this stage of his career exceed all of the latter named players significantly from the points they signed their contracts. Don’t believe me? Well, here’s a tweet with evidence.
He’s only got a combined 353 games of NHL wear on him at this point too, for reference Matthew Tkachuk at 23 y/o has 364 games under his belt. That matters, especially in a league where the playoffs are designed to beat the crap out of you. Coleman is a dual threat winger, he can get in deep and help establish a strong forecheck or he can carry the puck in with possession to create a high speed rush chance. Is he a point per game guy? No. Does he need to be? Also no. Quick explanation on how to read this chart: Red means positive shot volume, the darker the red the higher the shot volume from that area of the ice. Blue is the opposite, it’s a sign of shot suppression. The darker the blue the less shots are coming from that area of the rink. The upper half of this graphic is offensive impact, the bottom is defensive impact. The ideal situation is lots of dark red up top with lots of dark blue on the bottom.
Now I get to discuss the fun stuff – How good defensively Blake Coleman has been so far in his career. The offence has been subtle, but even in his worst defensive impact year (2018-19) he was still better at suppressing shots than the majority of the league. While with the Tampa Bay Lightning he was able to actively contribute to the blue black hole in front of the net in a great combination effort with his blueliners. Tremendous defensive play is expected from the Flames new addition – a player whose style is a seemingly perfect match with that of Darryl Sutter.
Offensively Coleman isn’t a Rocket Richard candidate, nor should you be sending his name to the Art Ross engraver. He’ll contribute – he has a real knack for scoring insane highlight reel goals. With Coleman the expectation is defence first, good transitional play, followed by offence should it arrive. He plays with good pace and will most likely slot at 2RW for Calgary forming what could be a deadly play-driving machine with Mangiapane on the other flank.
Nikita Zadorov – LD/RD – Shoots: Left – 6’6” 235 lbs – 26 y/o – 411gp – 23g – 60a – 83p – Made the 3rd round once – Pending RFA (Filed for Arbitration)
This one hit me outta left field – absolutely no idea the Flames had this guy on their dart board. He won’t be an offensive Giordano replacement, but he doesn’t need to be (Noah Hanifin can do it, more on that at a later date). Zadorov is the same type of defender that drug the Montreal Canadiens to the Stanley Cup FInal. Big guys that can protect the slot in a vicious manner, they’re perfect for when the refs decide to put their whistles away because what’s anyone going to do if Zadorov decides to crosscheck them out of the slot? Fall on their butt that’s what.

As you can see his defensive game fluctuates, but never into a positive defensive impact. (For terminology sake positive defence is bad, negative defence is good – the opposite for offence though where positive offence is good, negative offence is bad – clear as mud? great!). Having a reliable defender that you know is going to always hang back helps with the rush attack also. This could free up Rasmus Andersson (or Valimaki if Zadorov plays his off-side) to join the rush and create a 4 point north-south attack.
There are downsides to this – in a sense. Zadorov is not a good transitional player, relying on him in any manner to get the puck out of the defensive zone with possession might be too much. Off the glass and into the neutral zone will be his go-to. He moves well for his size and can smother the middle of the ice, but can still be burnt with speed should the neutral zone defence lapse. All-in-all the Zadorov trade only cost the Flames a third round pick, and those aren’t worth much on draft day. It’s a move that helps add to the new identity the Flames are searching for while also impacting other – already existing pieces of the roster – more than one might think.
Dan Vladar – G – Catches: Left – 6’5” 185 lbs – 23 y/o – (Minor stats) 78gp – 2.33 GAA – .917 SV% – 32-26-13 record – 2 years x $750K remaining
Dan Vladar – with the absolutely fantastic name that I’m going to relate to Star Wars whenever I can – is a young goaltender with good promise that came into a crowded crease in Boston. Calgary jumped on the possibility to get him and have come out of this with a young, term controlled, athletic goaltender. He’s got the tools and the AHL track record to succeed and I think the Flames are going to be so defensively proficient he’ll excel immediately.
When it comes to goaltending even the best goaltenders can put up middling numbers if not surrounded with enough support (Look at John Gibson in Anaheim). Down the stretch of the 2020-21 season the Flames embraced the Sutter way and protected the middle of the ice extremely well. If they keep that up – and with a full training camp there’s no reason to think it won’t – Vladar will be able to find success.
Trevor Lewis RW – Shoots: Right – 6’1” 202 lbs – 34 y/o – 730gp – 75g – 98a – 173p – 2 Stanley Cups – 1 year x $800K
The fourth line should be tough to play against at 5v5. Their directive isn’t to score goals, it’s to play “zero event hockey” where they may not get goals, but goals don’t get scored against them either. This signing adds to what will surely be a top 5 penalty kill league wide with Lindholm and Backlund gaining Lewis, Coleman, and Pitlick as PK options. Lewis is a tremendous fourth line shot suppressor and far exceeds his predecessor in 5v5 impact (see below). 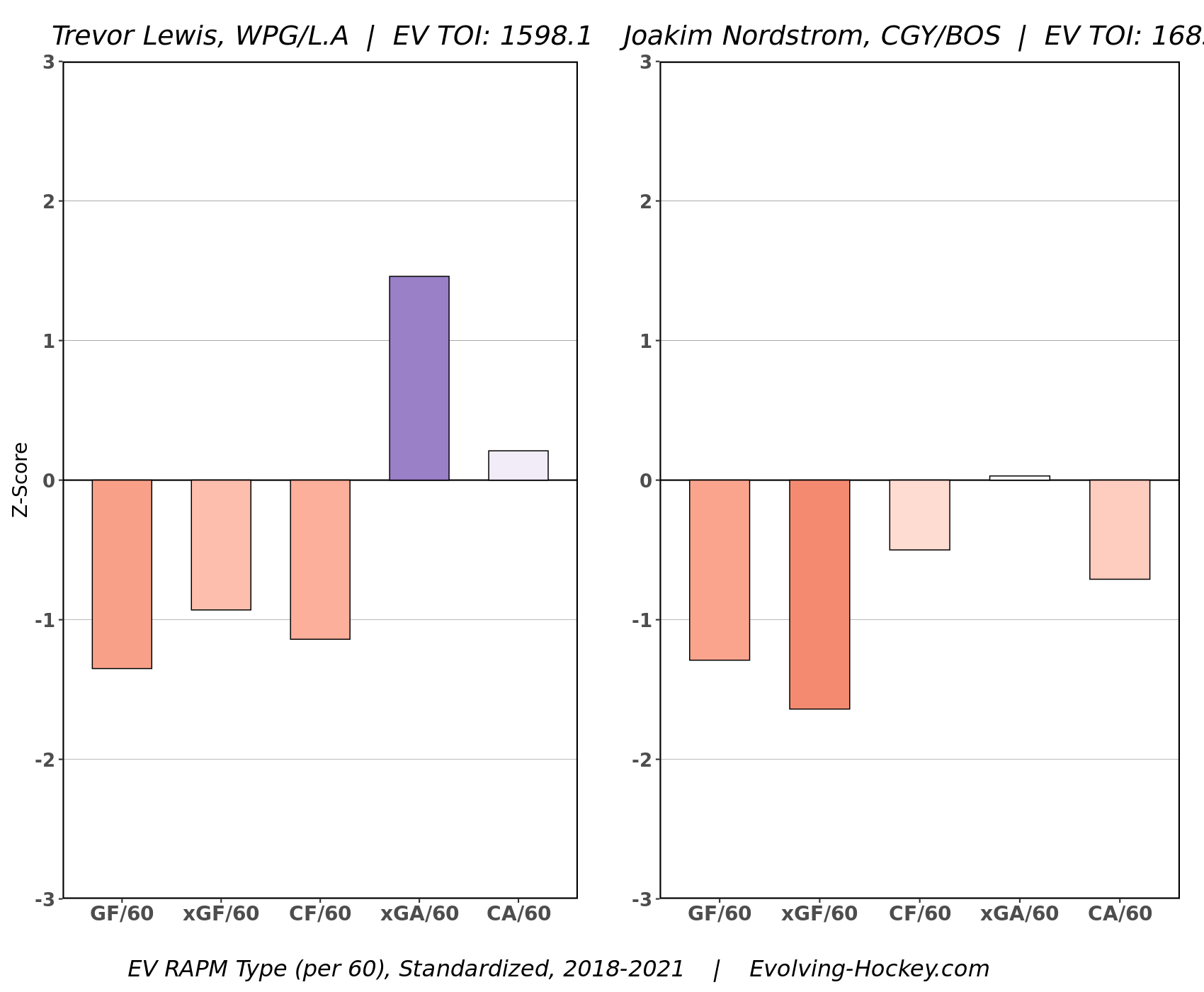 So – how to read a RAPM (Regularized Adjusted Plus Minus) chart. GF/60 translates to shooting ability – can you put the puck into the net at a high level. xGF/60 translates to offensive creation – the higher the blue bar the more offence you create relative to the league. xGA/60 translates to defensive suppression – the higher the blue bar means you aren’t letting quality chances get off while you’re on the ice. The two corsi’s (CF/60 and CA/60) are really team influenced – it’s a mixture of a matter of possession with the number of attempts coming either towards your net (CA) or against the opponents (CF).
Lewis was still a very effective defensive player (are you sensing a pattern yet) last season in Winnipeg. He’s carved out a niche role for himself and he plays it well. A useful player to have on your team, the Flames 4th line doesn’t appear to be one that will be easy to find room against.
Tyler Pitlick RW/C – Shoots: Right – 6’2” 200 lbs – 29 y/o – 286 gp – 47g – 37a – 84p – Was drafted by the Oilers – 1 year x $1.75M remaining
The fact that Pitlick can play fourth line center in a pinch is a huge bonus here, but I don’t want anyone expecting him to come here and shoot out the lights. The best way I can describe Pitlick is, similar to Trevor Lewis with a slightly better ability to shoot the puck. Pitlick’s ability to play up the middle gives Calgary fourth line options. Lucic – Pitlick – Lewis on paper looks to be one of the best energy lines that can actually defend in the league. It frees up spots in the top 9 for creative young players like possibly Jakob Pelletier or Matthew Phillips if they can impress the coaching staff at camp.

The Flames went in a clear direction in this free agency period, which is more than what you could say for over 2/3rds of the teams in the league. The Flames got four roster players that all excel in shot suppression, and all of them have the size to not get pushed around. You could say the Flames moves were very Sutter influenced, but not in the way that they were the first time Darryl was around Cowtown. No, these moves were well thought out, calculated bets – ones that analytically make sense for a defensive approach. Management has made the Calgary Flames a very hard team to play against, no opposing player is going to enjoy coming to play here. They’re going to get battered up, bruised, and are going to leave town in worse shape than they arrived.
My only concern I have remaining with this roster is where the depth goals are going to come from. Coleman will be able to contribute, but we don’t project him to be any more than maybe a 20-30-50 guy at best. Pitlick, Lewis, and Zadorov are all going to make Markstrom and Vladar’s nights easier but none of them help put the puck in and light the lamp at any consistent rate. Questions still remain – how much of a jump can Mangiapane make? Can Monahan bounce back or are they going to find the right trade to move him before the season starts? And the big one – will Brad Treliving be able to land Jack Eichel and ease the majority of my offensive concerns?
We’ll find out quickly, training camp is only about a month away.
Uncategorized
Recent articles from Shane Stevenson