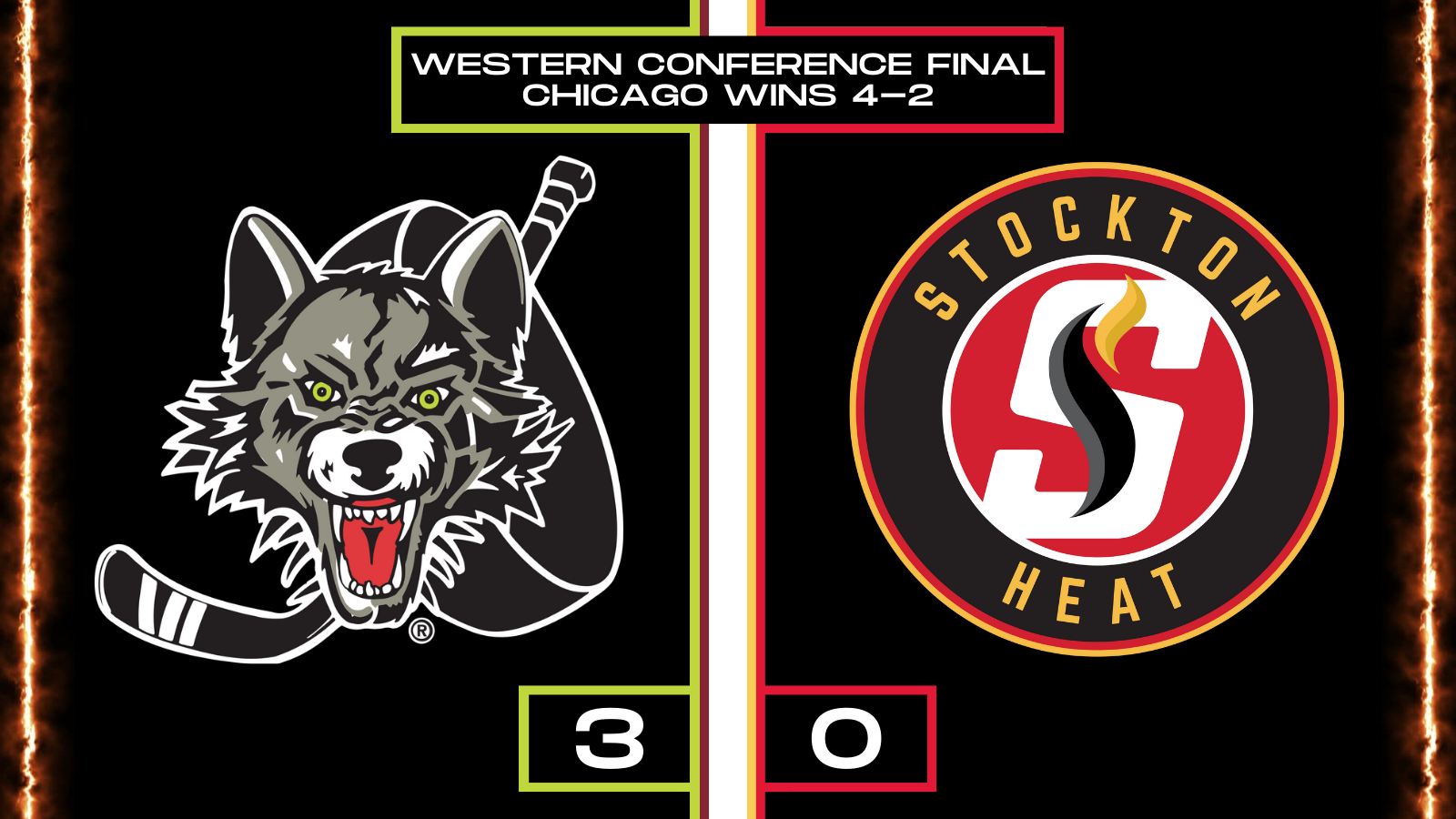 By Paige Siewert
7 months ago
As the team that was one of the favourites for the Calder Cup this season, this final loss stings just a little bit more. The Stockton Heat’s season came to an end on Tuesday night game six loss. They fell behind in their Western Conference Final series against the Chicago Wolves quite early. They went 0-3 in their first three games then started to make some ground when they returned home to Stockton and brought the series up to 3-2. That was the end of their winning streak and subsequently their season when they fell 3-0 in Chicago on Tuesday night.

A lot closer than it looks

A glance at the score and a completely different story is assumed within digging in deeper. The reality of the game is the production in the final two minutes that included an insurance goal and an empty netter for the Wolves. This was a scoreless game for 48:35 minutes with Stockton putting up the most shots on goal in the first period. They out-shot the Wolves 14-6 through 20 minutes.
In the second, the shots practically flipped with the Wolves out-shooting the Heat 15-5. Another factor that played into this was penalties. The Wolves had three penalties in the first period including a double minor. If there was a time for the Heat to score, that was it.
In the second, the Heat had three penalties to the Wolves’ one. Stockton went 0 for 5 on the power play in this game and Chicago went 0 for 3.
In the third, the Wolves got going 8:35 into the period with the first goal of the game. Ivan Lodnia of the Wolves scored on a one-timer that would’ve taken a miracle to save.
Both teams tightened up in the third with no penalties and the looming stress of possibly ending their season hung over the Heat. They were running out of time and couldn’t seem to generate anything to beat Pyotr Kochetkov.
In a last-ditch effort to stay alive in this series, the Heat called a timeout and the Wolves scored a breakaway insurance goal almost immediately after with 1:20 to go in regulation. The final nail in the coffin was an empty-netter with 45 seconds to go, off the stick of former-Flame, Josh Leivo.
The Heat started strong then their shots died down through the second and third periods. They went from 14 shots in the first period to 14 shots in the second and third periods combined. Dustin Wolf gave his team their best shot, stopping 35 of 37 shots.

Speaking of Dustin Wolf, not only was he unbelievably good through the regular season, but he also played the entire playoff run without any relief from a backup. In a five-game series, you can’t afford to throw a game or have a rough start with a cold goalie. The Heat needed what was working for them and a lot of that had to do with Wolf.
Adam Werner was very hot and cold through the regular season and Daniil Chechelev spent the majority of the season in the ECHL with the Kansas City Mavericks. He only got one game in with the Heat and backed up Wolf while Werner was up with the Flames as a second back-up when they were still in the playoffs.
Wolf’s abilities did not waver much and he was easily one of the most consistent players on this squad. He might not be ready to be a Flames starter right now, but the future is most definitely bright.

A season to remember

The Stockton Heat as we know it, are no more. The Flames organization announced the Heat will be relocating to Calgary next season. They are keeping the affiliation but they will not be known as the Stockton Heat when the 2022-23 season kicks off. They have played their last games at Stockton Arena and left their fans with a win in game five.
Attendance was an obvious issue this year and especially noticeable in the playoffs. This is not the only reason for relocating but surely was brought into the conversation. Wherever the home venue ends up being for this team in Calgary, hopefully, the local hockey market can give them a better showing.
They gave their city and fans a great send-off with an extensive list of records, awards and accolades presented to them this season on a team and individual level as well as a solid three-round playoff performance. In their 13-game playoff run, the Heat finished up with an 8-5 record.
As this chapter of this AHL team closes in Stockton, another one opens in Calgary.