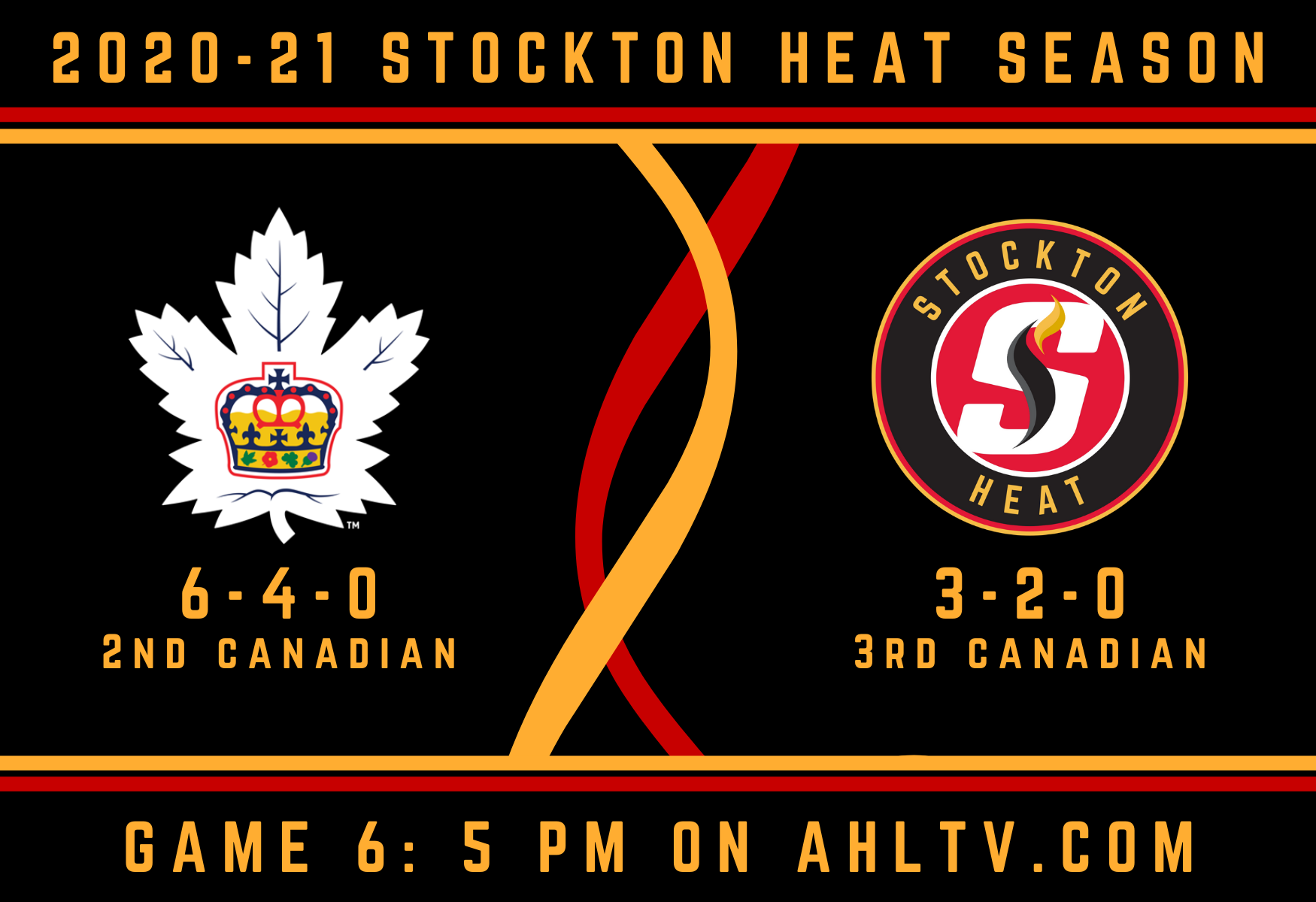 By Mike Gould
1 year ago
Look for your Darryl Sutter discussion elsewhere—it’s a Stockton Heat game day!
Fresh off their third consecutive win, the Heat are back in action on Friday to take on a very familiar opponent.
The Heat (3-2-0) opened their season with four games in a row against the Toronto Marlies (6-4-0), getting blown out in the first two contests by a combined 12-2 score before rebounding to sweep the back half of the series.
After a brief stopover in Ottawa for Wednesday’s commanding win over the Belleville Senators, the Heat are now in Canada’s largest city for two more clashes against the Toronto Maple Leafs’ AHL affiliate.
Heat centre Adam Ruzicka is on a tear, having just become the first player in club history to record three consecutive three-point outings. He’ll look to continue his points streak today.
Former Marlies and Maple Leafs goaltender Garret Sparks collected his first victory of the 2020-21 season on Wednesday, making 38 saves on 39 shots en route to a 4-1 Stockton win.
Hayden Lavigne is backing up Sparks on this Heat road trip; the 24-year-old goaltender spent the last four seasons at the University of Michigan before turning professional this year. Lavigne has no AHL experience but has played four games in the SPHL and two in the ECHL in 2020-21.
2020 Flames first round pick Connor Zary scored his first two professional goals, including the game-winner, on Wednesday. His line, with Ruzicka and Matthew Phillips, combined for eight assists in the win over Belleville.
Glenn Gawdin, meanwhile, failed to register a point in his return to the AHL after a five-game stint with the Flames. The 23-year-old centre fired three shots towards Senators goaltender Filip Gustavsson on Wednesday while skating on a line with fellow veterans Justin Kirkland and Luke Philp.
After standing on his head in the Marlies’ first three matchups against Stockton, Toronto goaltender Andrew D’Agostini allowed eight goals on 26 shots in just 40 minutes of action in the final game of the series before being pulled in favour of AHL rookie Kai Edmonds. The Marlies played their last two games against the Manitoba Moose; D’Agostini started and won both, allowing just four goals on 54 shots.
The Heat went with these lines in their 4-1 win over Belleville on Mar. 3:
Connor Zary – Adam Ruzicka – Matthew Phillips
Justin Kirkland – Glenn Gawdin – Luke Philp
Emilio Pettersen – Martin Pospisil – Dmitry Zavgorodniy
Alex Gallant – Mark Simpson – Eetu Tuulola
Connor Mackey – Alex Petrovic
Colton Poolman – Alexander Yelesin
CJ Lerby – Zac Leslie
Garret Sparks
Hayden Lavigne
Meanwhile, the Marlies deployed these combinations against the Moose on Wednesday:
Alex Galchenyuk – Kalle Kossila – Joey Anderson
Nick Robertson – Tyler Gaudet – Adam Brooks
Bobby McMann – Rourke Chartier – Justin Brazeau
Rich Clune – Colt Conrad – Scott Pooley
Kristians Rubins – Calle Rosen
Teemu Kivihalme – Mac Hollowell
Riley McCourt – Martin Marincin
Andrew D’Agostini
Kai Edmonds

Stockton — Eetu Tuulola. The 6’2″ right-winger often finds himself right in the middle of post-whistle scrums and the like but needs to find more offensive consistency. Through five games, Tuulola has zero points and just seven shots on goal. Heat coach Cail MacLean demoted Tuulola to the fourth line before the Belleville game to accommodate Gawdin’s return. The Flames selected Tuulola 156th overall in 2016 and he made the jump to the Heat last season, scoring 10 goals in 50 games while adding 13 assists.
Toronto — Alex Galchenyuk. There’s a familiar name! Galchenyuk started the season with the Ottawa Senators before being traded alongside Cedric Paquette to the Carolina Hurricanes in a deal that sent Ryan Dzingel the other way. Two days later, after Galchenyuk cleared waivers, Carolina sent him to Toronto in exchange for Egor Korshkov and David Warsofsky. The 27-year-old Galchenyuk has 321 points in 557 NHL games and is likely too good for the AHL, but he needs to get into a successful rhythm with the Marlies before he can return to the NHL. His tenures with the Pittsburgh Penguins, Minnesota Wild, and Senators were marred by inconsistent play; Galchenyuk has two points (both assists) in his two games with the Marlies thus far.

This game will be broadcast on AHLTV.com (subscription required). Puck-drop will be at 5:00 p.m. MT. Live game updates can be found on Twitter at @miketgould and @theheatbeat, or online at TheAHL.com.
Uncategorized
Recent articles from Mike Gould