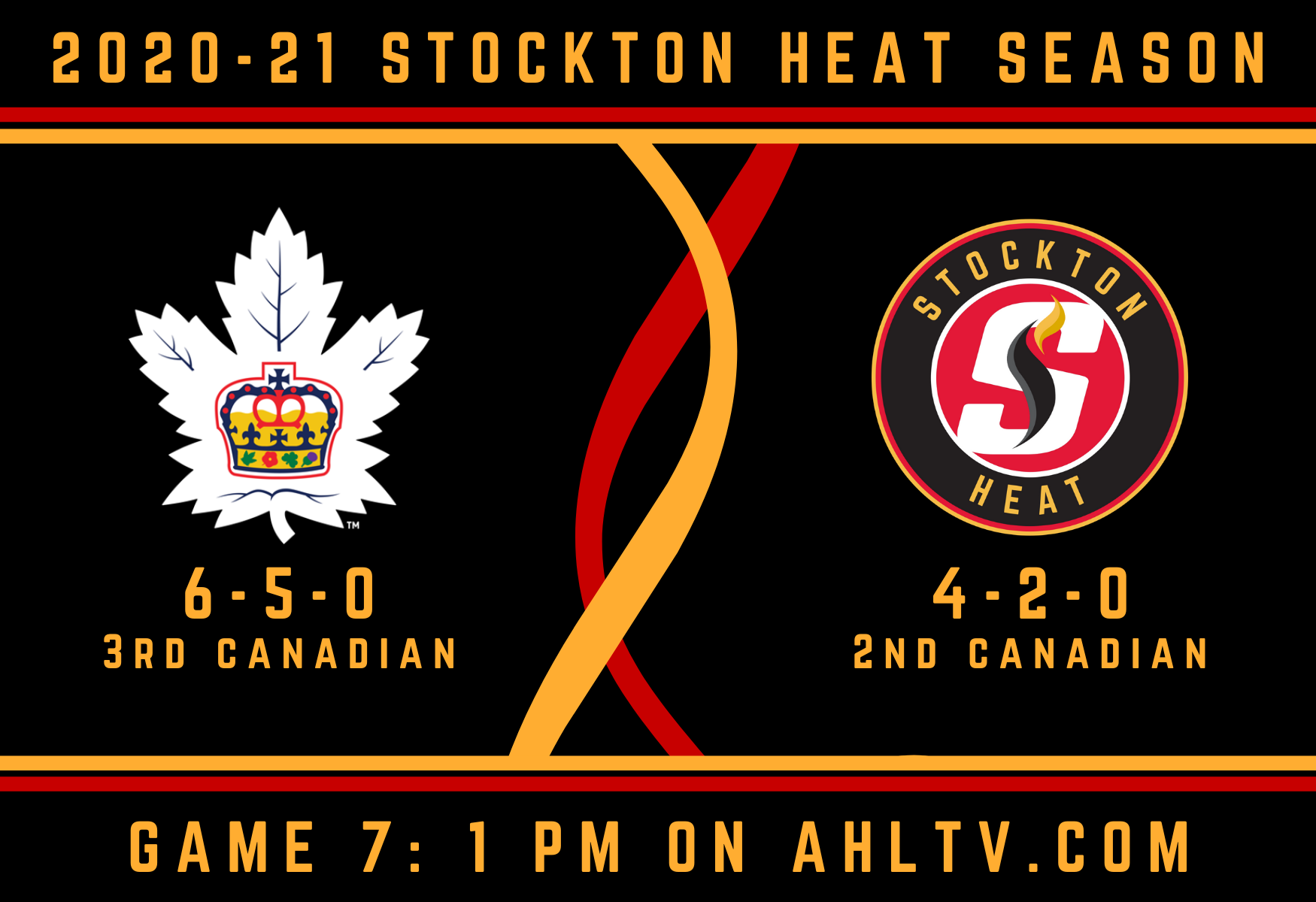 By Mike Gould
1 year ago
The good news: the Stockton Heat won their last weekend matinee game by an 8-1 score. Adam Ruzicka and Martin Pospisil both had three points for the Heat on Feb. 26 en route to the commanding victory.
The bad news: Stockton’s first match of the 2020-21 season was also an afternoon matinee game. It did not go nearly as well. The Heat registered the first seven shots of their Feb. 21 season-opener; unfortunately, their opponents, the Marlies, responded by scoring the first seven goals of the game. Luke Philp eventually scored to cement a 7-1 loss for the home side.
Cail MacLean’s squad looks to have shaken off any early-season rust it might have amassed during its lengthy COVID-19 hiatus. The Heat were among the last AHL teams to begin playing the 2020-21 season; conversely, the Marlies had already completed a four-game series with the Manitoba Moose by the time they greeted the Heat for their Scotiabank Saddledome debut.
Since being outscored 12-2 in the first two games of the year, the Heat have gone on a tear and have yet to lose another game. Stockton has outscored its opponents by a 21-5 margin over this four-game stretch of victories, allowing just one goal in each of the last three contests.
Stockton’s first line—made up of Ruzicka, Matthew Phillips, and Connor Zary—has been the driving force behind this recent streak. The trio has combined for 27 points over the last four games; Ruzicka has led the way with 12 points over that span, good enough to seize the top spot in the American Hockey League’s scoring race.
Alex Petrovic recorded three points on Friday. Eetu Tuulola scored his first goal of the season. Connor Mackey picked up his first professional goal and added a helper. Martin Pospisil poked home a power-play rebound to double his goal total on the year. The Zary/Ruzicka/Phillips line has certainly been driving the bus, but the Heat are beginning to receive consistent and meaningful contributions from players sprinkled throughout the lineup.
On the Marlies’ side, top prospect Nick Robertson missed Friday’s game with an oblique injury and is considered day-to-day. The 19-year-old Pasadena, CA product has five NHL games under his belt and sits third on the Marlies’ points leaderboard this season.
Marlies goaltender Andrew D’Agostini was pulled late in Friday’s game after allowing four goals on 30 shots. Make no mistake—the 27-year-old keeper was phenomenal, almost single-handedly preventing Phillips from scoring when he legitimately could have had a hat trick. Angus Redmond played the final five minutes in relief, allowing one goal on one shot.
The Heat used these lines in their win over Toronto on Mar. 5:
Connor Zary – Adam Ruzicka – Matthew Phillips
Justin Kirkland – Glenn Gawdin – Luke Philp
Emilio Pettersen – Martin Pospisil – Dmitry Zavgorodniy
Alex Gallant – Mark Simpson – Eetu Tuulola
Connor Mackey – Alex Petrovic
Colton Poolman – Alexander Yelesin
CJ Lerby – Zac Leslie
Garret Sparks
Hayden Lavigne
Meanwhile, the Marlies went with these combinations on Friday:
Alex Galchenyuk – Kalle Kossila – Joey Anderson
Rourke Chartier – Tyler Gaudet – Adam Brooks
Bobby McMann – Colt Conrad – Justin Brazeau
Rich Clune – Hudson Elynuik – Scott Pooley
Calle Rosen – Martin Marincin
Teemu Kivihalme – Mac Hollowell
Kristians Rubins – Joseph Duszak
Andrew D’Agostini
Angus Redmond

Stockton — Glenn Gawdin. The 23-year-old has played two games for the Heat after making his return from a five-game NHL stint. Gawdin led the Heat in scoring last year with 47 points in 53 games but has yet to find the scoresheet in any of the three leagues in which he has played this season (he played one game for Swiss club Visp EHC in November). Coming in at 6’1″ and 191 pounds, Gawdin is a smart, versatile forward with a great shot and underrated skating ability. However, his spot next to Matthew Phillips on Stockton’s top line seems to have been filled in his absence—perhaps permanently. With Adam Ruzicka playing some extremely impressive hockey, Gawdin will have to rediscover his AHL rhythm as part of some other personnel configuration.
Toronto — Justin Brazeau. This guy is huge. Brazeau is a 6’6″, 226-pound right wing with a gaudy junior track record but no NHL Draft prestige. With the OHL’s North Bay Battalion, Brazeau followed up a 75-point 2017-18 season by scoring 61 goals and 113 points in 68 games the next year. He made his professional debut last season, playing 57 games for the ECHL’s Newfoundland Growlers and scoring 55 points; now, having just turned 23, he looks to be a full-time AHLer. With just two points (both goals) in 10 games this season, Brazeau seems due to take another step offensively if he continues receiving deployment with the Marlies’ man-advantage unit. Both his markers this year have come on the power play.

This game will be broadcast on AHLTV.com (subscription required). Puck-drop will be at 1:00 p.m. MT. Live game updates can be found on Twitter at @miketgould and @theheatbeat, or online at TheAHL.com.
Uncategorized
Recent articles from Mike Gould