From Pelletier to Poirier: Get to know the Calgary Flames’ top farmhands 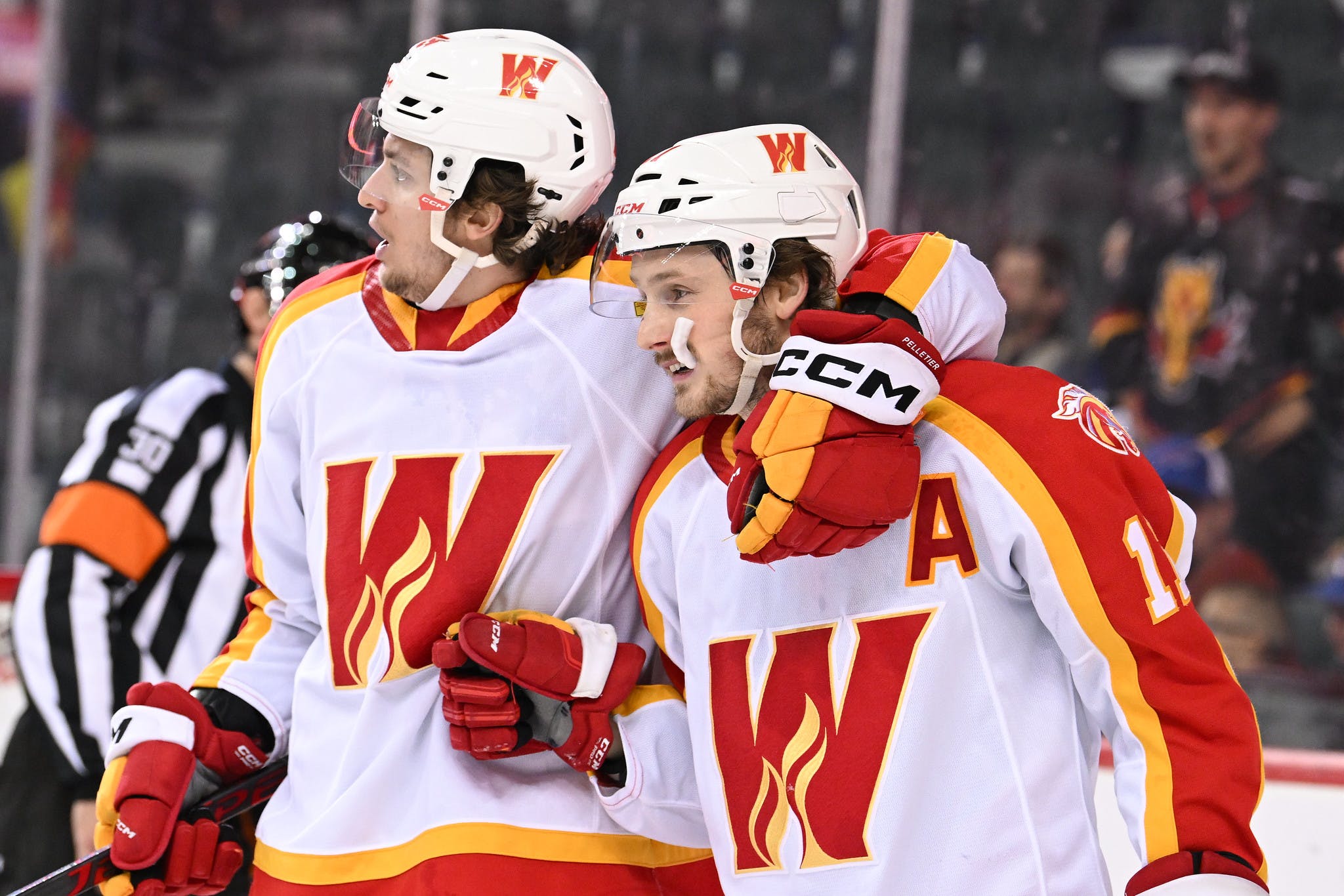 By Mike Gould
1 month ago
The Calgary Wranglers are a joy to watch. They’re a heart-and-soul group with great players at every position and terrific special teams. In their last 11 games, they’ve gone 9–1–1.
It’s a minor miracle that the Wranglers are even able to play out of the Scotiabank Saddledome at all, given the venue’s packed schedule of Flames, Hitmen, and Roughnecks games (not to mention additional special events).
But, right now, there’s a solid case to be made that the Wranglers provide the best bang for your buck out of all of them. They’re likeable, their tickets are affordable, and they score a lot. What more could you want?
Here at FlamesNation, we’ve been keeping close tabs on the Wranglers all season long — both to keep an eye on potential future Flames players and to gauge the viability of having the AHL club so close to home.
Attendance certainly dipped a little bit early on as the Wranglers stumbled out of the gate, but Sunday’s matinee clash against the Abbotsford Canucks was the Wranglers’ busiest game to date. More than 5,700 people showed up to the Saddledome to watch Calgary defeat their Pacific Division rivals 4–3 in overtime.
Many of the Wranglers are well-known around these parts, especially Dustin Wolf, Matthew Phillips, and Jakob Pelletier. Some are a little more anonymous.
For your collective enjoyment, here’s your one-stop rundown of the Calgary Wranglers’ top players — what they can do in the AHL, what they might be able to accomplish at the next level, and when they might reasonably make the jump.

It’s difficult to overstate how impressive Connor Zary has been this year. He’s an incredibly skilled player, capable of stickhandling in a phone booth and beating any goaltender in the AHL with his shot.
Zary has 18 points in 18 games this year while playing away from Matthew Phillips and Jakob Pelletier at five-on-five. He’s driving a line with Cole Schwindt and Emilio Pettersen as a full-time AHL centre, and he’s doing a terrific job — particularly considering the challenges he faced as a first-year pro with the Stockton Heat in 2021–22.
We likely won’t see Zary in the NHL this year — it’s probably in his best interests to keep playing centre in a top-six role, for now — but he’s a great prospect with the potential to become a top-six centre at the top level.

Much was made about Jakob Pelletier’s struggles at the 2022 Penticton YoungStars Classic. Even more was made about his perceived shortcomings in training camp.
But the 5’10”, 180-lb winger has been ridiculously hot for the Wranglers of late. He’s on a 10-game point-scoring streak and a six-game goal-scoring streak. Over those 10 games, he has seven goals and 17 points.
Pelletier is really fast. He kills penalties. Nobody will ever confuse him for the Calgary Tower, but he has all the tools to be a versatile middle-six winger in the NHL — or even more.

Both Zary and Pelletier are 21. Radim Zohorna is 26. The huge centre is playing top-line minutes with the Wranglers between Pelletier and Matthew Phillips and is faring relatively well, providing legitimate value as a forechecker and defensive player.
Zohorna’s production doesn’t leap off the page, especially given how much the Wranglers have scored this season, but he’s a massive guy — 6’7″, 225 pounds — who certainly hasn’t struggled to keep up with his waterbug linemates.
It’s unclear whether Zohorna has the boots to last in the NHL (he’s already played 25 career games with the Pittsburgh Penguins) but he’d probably be a serviceable fourth-line centre in the big leagues.

We have written plenty about Matthew Phillips already. If he isn’t the best offensive player in the AHL right now, he’s right there.
Phillips isn’t overwhelmingly fast, but he’s extremely agile and has the best hands on the team. The 24-year-old is also a top-tier finisher at both five-on-five and the power play, with his career shooting percentage over 217 career games currently hovering around 18%.
The Flames should call him up. It’s impossible to say what he might be in the NHL (not a lot of 5’8″ players make it to that level) but he’s earned the opportunity to ply his trade in a middle-six role.
But for where is right now, Phillips is a homegrown superstar playing in front of the Saddledome crowd in the second-best North American professional league.

It is fully intended as a compliment when I call Ben Jones “Glenn Gawdin-y.” It’s hard to identify any area in which he dominates at the AHL level, but he’s an excellent all-around player who can play in all situations and provide legitimate offence.
Jones, 23, has spent much of the season as the Wranglers’ No. 3 centre between Brett Sutter and Walker Duehr. He’s also received ample power-play time and has made the most of it.
It’s important to note Jones has just one five-on-five goal in 17 games this season. He’s scored twice on the PP and once shorthanded. But he also ranks fourth on the Wranglers — just one spot (and shot) behind Matthew Phillips — with 51 shots on goal.
Jones might already be capable of playing a No. 4 centre role in the NHL. That’s probably his ceiling, but who knows?

Much like Connor Zary, Cole Schwindt needs time. Schwindt is a few months older and a little bigger, but he’s also playing on the right wing instead of his natural centre position.
In 17 games with the Wranglers this season, Schwindt has six goals and 13 points (with all of his goals coming in his last seven games). The 21-year-old has scored four of those goals on the power play.
Schwindt has a terrific wrist shot — it’s arguably the best on the Wranglers. He doesn’t use it as much as his teammates (yet) but the capability is clearly there. For now, however, Schwindt is sidelined with a lower-body injury that kept him out of Sunday’s game against Abbotsford.
The Flames clearly covet what Schwindt can bring. He’s a good player and a safe bet to play NHL games in the future. If all pans out well, he could play third-line minutes for the Flames.

Did anyone expect Jeremie Poirier to have this kind of impact right away? The 20-year-old defenceman has been outstanding in his debut spin with the Wranglers, scoring 15 points in 18 games and already looking like a potential future star.
Note the word potential. Ever since he was drafted, Poirier has been touted as a boom-or-bust prospect. He’s one of the most skilled young players in the AHL, but it remains to be seen how he’ll fare as a defender in the NHL.
My goodness, though — can he ever score. No other AHL rookie defenceman has more than 10 points this season. Poirier loves to rush the puck up the ice and has terrific instincts in the offensive zone. You can’t teach the things he does well.
Poirier could legitimately become a top-pairing NHL defenceman. He has it. With the right guidance, he could really blossom.

Despite being taken one round earlier than Jeremie Poirier in 2020, Yan Kuznetsov’s NHL upside is much less certain than that of his fellow 2022 Memorial Cup champion teammate.
Kuznetsov is a really big guy. At 6’4″ and 215 pounds, he’s the Wranglers’ most imposing regular defender. But, as we covered last week, Kuznetsov isn’t overly physical and he generally avoids taking penalties. He also hasn’t scored a whole lot at any level.
However, save for 33 QMJHL games last season, Kuznetsov has spent his North American career playing in leagues where he’s been one of the youngest players around. At age 16, he logged regular minutes on a good USHL team; the following year, he didn’t miss a game as a 17-year-old freshman with the NCAA’s UConn Huskies.
Kuznetsov needs to (and likely will) become more assertive with the puck. He has a heavy shot that he seldom uses but, with time, he’ll start scoring a little more. There’s an outside chance could eventually become a quality middle-pairing NHL defender.

It’s amazing to think that Dustin Wolf’s numbers this year are actually a downgrade from what he posted as a rookie. Most 21-year-old goaltenders would love to go 10–3–0 with a .915 save percentage in the AHL.
As it stands, Wolf is coming off a spectacular 2021–22 campaign in which he practically carried the Stockton Heat to the fourth round of the Calder Cup Playoffs. With his 33–9–4 record and .924 save percentage in the regular season, Wolf was a shoo-in as the AHL’s goaltender of the year.
Wolf, like so many of the Flames’ other top prospects, is on the smaller side. At 6′ and 175 pounds, he’d be close to an outlier at the NHL level. Like Phillips, Wolf’s size is almost certainly why he fell to the seventh round of the 2019 NHL Draft.
But he’s just so good. Wolf has been among the elite at his position at every level throughout his development. The only league left for him to conquer is the NHL.
If we’re projecting Wolf’s upside … the sky’s the limit.
Editorials
Recent articles from Mike Gould