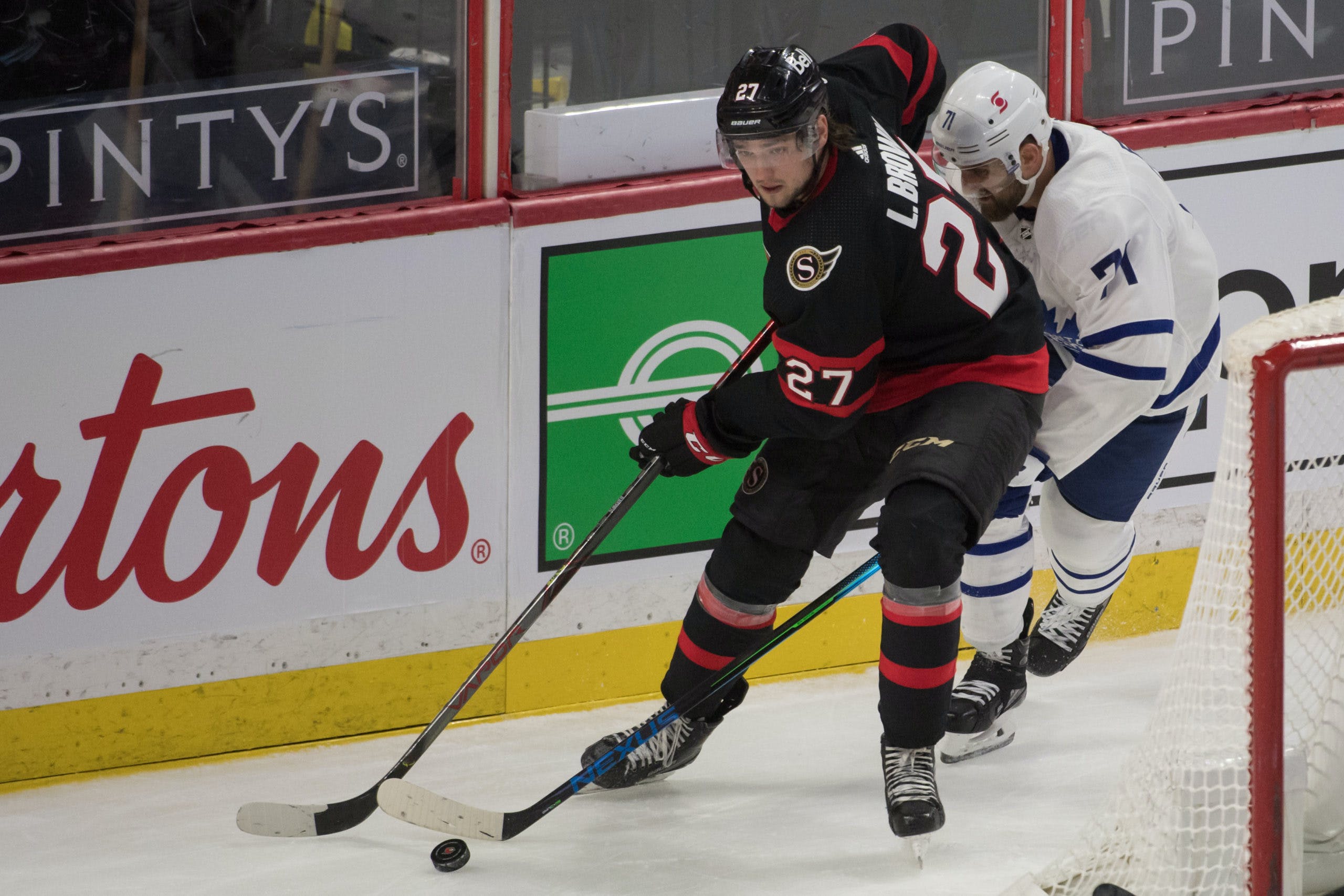 By Mike Gould
1 year ago
The St. Louis Blues have placed forward Logan Brown on waivers, TSN’s Chris Johnston announced Saturday.
Brown, 23, is a natural centre who stands 6’6″ and weighs 218 pounds. The Ottawa Senators selected Brown 11th overall in the 2016 NHL Entry Draft; he became a Blue on Sept. 25 in a trade that saw 26-year-old winger Zach Sanford move to the Sens.
Now, after just two weeks in St. Louis, Brown is available for free to all 31 other teams — including the Senators — on waivers. If the Calgary Flames decided to put in a claim for Brown, they would only get him if the following teams with higher waiver priority (read: they finished with worse records than Calgary in 2020–21) opted to pass:
A prolific scorer in junior and the American Hockey League, Brown has yet to receive an extended look in the NHL. As a 20-year-old AHLer with the 2018-19 Belleville Senators, Brown scored 42 points (14 goals, 28 assists) in 56 games; he’s since continued to impress, tallying nine goals and 37 points in 38 games with Belleville over the last two AHL seasons.
Brown’s longest stint in the NHL came during the 2019–20 season, during which he suited up for 23 games with Ottawa. He scored eight points (one goal, seven assists) despite converting on just 4.3% of his individual shots on net.
A pass-first forward dating back to his time in the Ontario Hockey League, Brown also possesses an impressive wrister. It’s a weapon he could probably stand to use more. After scoring on 12.1% of his 58 shots in 25 games with Belleville in 2019–20, Brown took just 23 shots in 13 games with the B-Sens last season and scored only two goals.
Nevertheless, Brown remained a highly positive influence in the AHL last season. According to Pick224, Belleville managed to draw even during Brown’s shifts at 5-on-5 but suffered without him on the ice in the games he played. With Brown on the ice, the B-Sens scored six goals and allowed six; during his time on the bench, they were outscored 28-18.
Belleville experienced a similar improvement with Brown on the ice in 2019–20, going from a 25-17 goal differential during his shifts at 5-on-5 to 35-35 without him.
Brown’s positive impact continued during his time in Ottawa, particularly during two-month stint with the team in the 2019–20 season. In addition to his solid production, which put him on pace for 29 points over an 82-game season, Brown posted an impressive +9.55 relative on-ice expected goals percentage at 5-on-5 (according to Natural Stat Trick).
Among Senators players with a minimum of 20 games in 2019–20, Brown’s 2.12 expected goals against per 60 minutes at 5-on-5 ranked second-best on the team. His 2.70 5-on-5 expected goals for per 60 ranked fourth, behind only Brady Tkachuk, Mike Reilly, and Dylan DeMelo. The Senators out-chanced their opponents 113-93 with Brown on the ice at 5-on-5.
Evolving-Hockey‘s “Goals Above Replacement” (GAR) model rated Brown as being worth 3.1 goals above replacement in 2019–20, primarily as a result of his offensive play. The “Standing Points Above Replacement” (SPAR) model from the same site valued Brown’s play in 23 games as being worth $1.8 million; Brown counted for $863,333 against Ottawa’s salary cap in 2019–20.
Why, then, has Brown thus far failed to stick in the NHL? Aside from his 23 games with Ottawa in 2019–20, Brown managed to get into just seven contests in parts of three additional seasons with the Senators.
Part of the reason for Brown’s lack of staying power might be that he doesn’t hit. Despite his massive 6’6″ frame, Brown has thrown just 14 hits in 30 NHL games. He’s taken three minor penalties and has never fought. Brown is a finesse player living in the body of an enforcer.
The Calgary Flames have plenty of enforcers. Milan Lucic, Erik Gudbranson, and Nikita Zadorov are all more than willing to deliver bone-crushing hits and drop the gloves, for better or for worse. What the Flames could really use is a playmaking utility forward who could theoretically move up and down the lineup.
Brown’s size is just a bonus. While it’s possible Flames head coach Darryl Sutter could see some value in Brown’s stature (even if he’s not overly physical), he also provides offensive skill that the team sorely needs.
The Flames would be smart to take a shot on Brown. With Tyler Pitlick and Brad Richardson currently out of the lineup with injuries (and Blake Coleman set to miss opening night while serving his suspension), Brown could put his ability as a puck-mover on display in the Flames’ middle six. Perhaps he could occupy the left wing spot on the Flames’ third line with Mikael Backlund and Dillon Dube.
Brown offers a very interesting package of attributes and upside. There’s a chance he could become a valuable player for the Flames if used in the right role. Where’s the harm in giving him an opportunity?
Uncategorized
Recent articles from Mike Gould