Looking at the Flames’ depth chart and cap situation pre-lottery 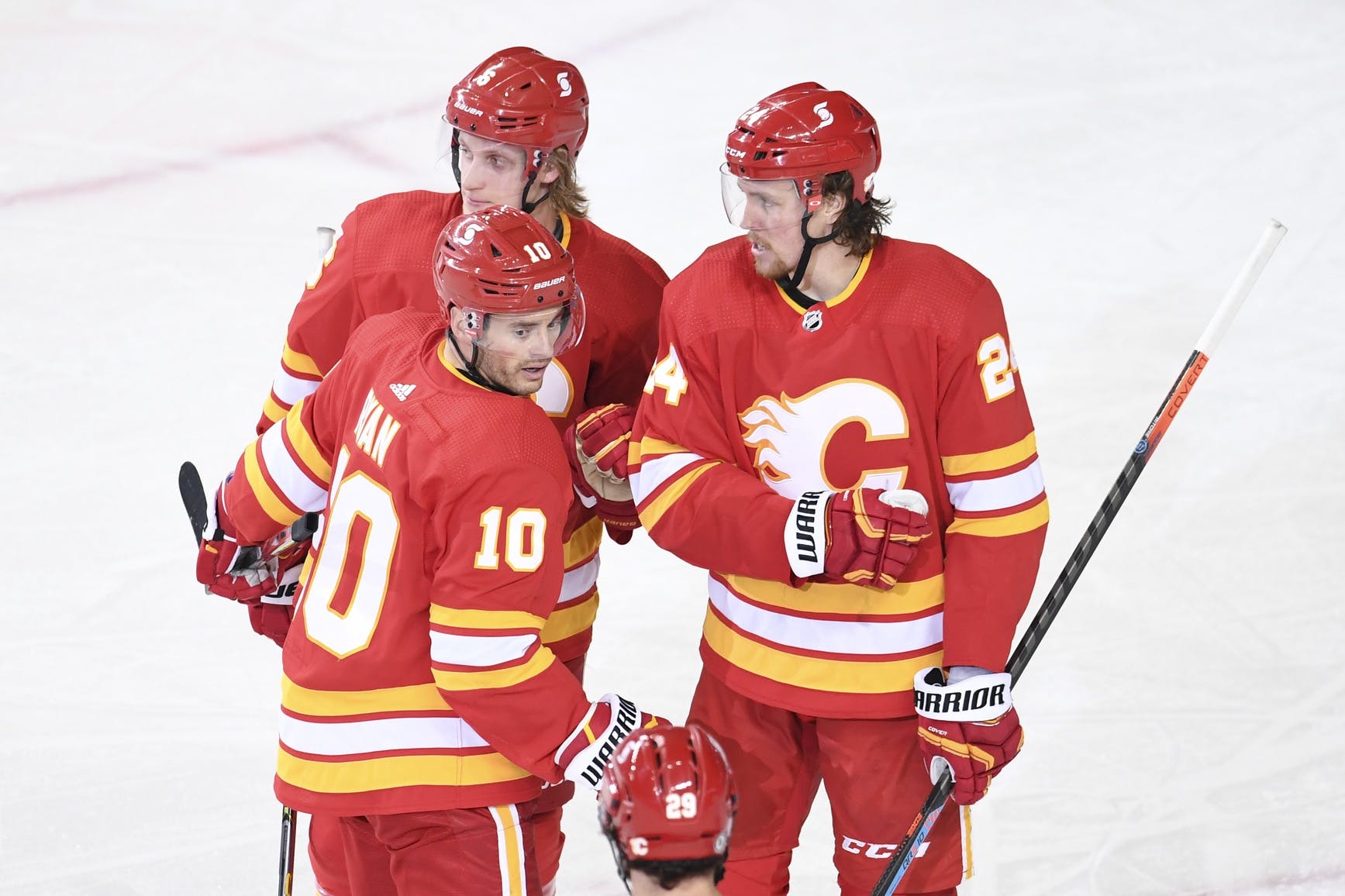 By Ryan Pike
1 year ago
After a few weeks sitting idle, the 2021 off-season really kicks off in earnest for the Calgary Flames on Wednesday night with the NHL’s draft lottery festivities. In advance of the occasion, we’ve prepared a quick organizational snapshot of how the Flames look from a depth and salary cap perspective.

Our guiding assumptions here: no pending unrestricted free agents re-sign with Calgary, all pending restricted free agents re-sign according to Evolving Hockey’s projections (subscription needed), and either Derek Ryan or Oliver Kylington are selected by Seattle so Flames get no external cap relief. From a cap perspective, we’re trying to project conservatively.
Forwards
Defense
Goalies
Other commitments: Troy Brouwer’s buyout ($1,500,000)
The Flames have $69.847 million committed to 14 players (and one regional Sportsnet intermission panelist), leaving $11.653 million remaining for eight or nine roster spots – a backup goalie, two defensemen and five or six forwards, depending on if they want to carry 22 or 23 players.
If the Flames decide to back-fill their roster entirely with league-minimum players at $750,000 apiece (they won’t), that leaves them with $5.203 million in cap space remaining. They’ll probably need to spend around $1.5 million to land a decent backup goalie, though, and so that leaves them with only around $4.6 million to upgrade their roster.
Internal candidates for the open spots likely include:
If you’re betting on pending UFAs returning, players like Michael Stone, Brett Ritchie and perhaps Joakim Nordstrom as a fourth line/penalty kill specialist are good bets. All three could probably be retained at league minimum.

Here’s a quick position-by-position rundown:
Left wing
The NHL group is pretty well-established here, and the big question is how many depth bodies will be placed between Jakob Pelletier and the big league group. Simon probably won’t be retained and Rinaldo seems unlikely given the lack of a taxi squad in 2021-22 (and the need to get the young AHLers a lot of reps).
In an ideal world, Lucic would probably be a fourth line winger. Can the Flames find a cost effective third line option?
Centre
With Ryan’s possible departure, it seems likely that Gawdin or Ruzicka push for NHL work. (My dark horse is Zary, but he probably needs a bit of AHL seasoning given how tough it is to play centre at the NHL level.) It wouldn’t be shocking if the Flames consider moving one or Backlund or Monahan to open up some cap space or to address positional weaknesses elsewhere.
Right wing
There are two NHL regulars listed here, and neither is a right shot. Behind Dube things get quite lean. Perhaps the Flames will bring back Ritchie as a depth move, as he was relied upon a lot by Darryl Sutter. Organizationally, there’s still work to do on the right flank.
Left defense
The emergence of Hanifin as a high-end defender this season, rather than as a solid secondary option, has really made the left side group deeper. Valimaki and Mackey are probably both worthy of full-time NHL gigs in 2021-22. It seems likely that Nesterov walks as a free agent this summer, which could pave the way for both young players to be full-timers in the NHL. The depth outside of the NHL is a bit of a question mark, though.
Right defense
The right side seems fairly straight-forward at the NHL level. Stone seems like the Brett Ritchie of this group, in that he can probably come back at a low cap hit deal and not be much of a hindrance – he was actually quite good last season. But it’s unclear what the future holds for Kylington, Yelesin and Petrovic, and it seems probable that they move on from the organization this summer. Organizational depth on the right side could become an issue.
Goaltenders
The big question here is who’ll be Markstrom’s backup next season. It seems likely that Parsons is retained for expansion draft purposes, but it’s unclear what the future holds for Domingue or Zagidulin in the organization.
Uncategorized
Recent articles from Ryan Pike