By Mike W
1 year ago
We knew the Flames would not go undefeated under Darryl Sutter, right? Well, maybe a small part of us did, we just dare not speak it into words. That slight, misguided idea was obliterated last night.
Getting embarrassed by the Oilers on national television is sure getting old real fast.

Getting behind early, inability to dictate play, poor puck management, and falling apart when things go bad… old habits.
Things were looking okay. The Flames had some really strong 5v5 stretches in the second and the game was within striking distance but it seemed every time they got rolling, the progress was erased by a bad penalty or a horrendous turnover (all leading to goals).
(Natural Stat Trick)
Darryl pointed to a mistake free game in the win over Montreal last week. This was the opposite. A plethora of mistakes, most of which ended up behind Markstrom.
The 3-0 and 4-1 goals were killers. Backlund’s slot gift that found it’s way to Kahun via Barrie and Leon Draisaitl drained all the momentum the Flames had been building in the ozone the shifts prior.
Gio’s stick infraction gave the Oilers’ lethal power play another chance and obviously McDavid scored at will.
It was pretty much lights out after that. Let’s blame the jerseys.

(Moneypuck)
We’ll get to special teams shortly, because all things considered that lost the Flames the game, but I was feeling okay with the pushback following the first two Edmonton goals. Again, 5v5 the Flames actually controlled a lot of the game and if you erase the blatant turnovers that led to goals by 17 and 11  this game is closer.
The discouraging aspect of this game was that this group continued to assert their proclivity for letting things get off the rails. Instead of a 4-1 loss where it just wasn’t your night, the Flames did what we’ve seen many times before: allowed things to get out of hand. All of a sudden it’s a seven spot once again against your provincial rival.
Why does that happen seemingly so often? Sutter certainly has his hands full trying to figure that one out. This group certainly has the ‘bad to worse’ phenomenon trademarked.

Turning the puck over to 97 or 29 right in the slot is asking for trouble. And the Flames got it. As per MoneyPuck, the Flames gave the puck away five times in the defensive zone. Again, two of them lead to goals. The team’s defensive unit of Backlund, Mangiapane, and Lucic were on the ice for all even strength Oilers’ tallies.
The Flames were just discombobulated all over the ice last night. They couldn’t breakout efficiently, stumbled and bumbled through neutral ice coughing up the puck and getting turned back in transition, and just couldn’t do anything right with the puck.

Special teams ultimately killed the Flames. You can’t give that power play unit an inch because they will take a mile. It’s a nuclear weapon. 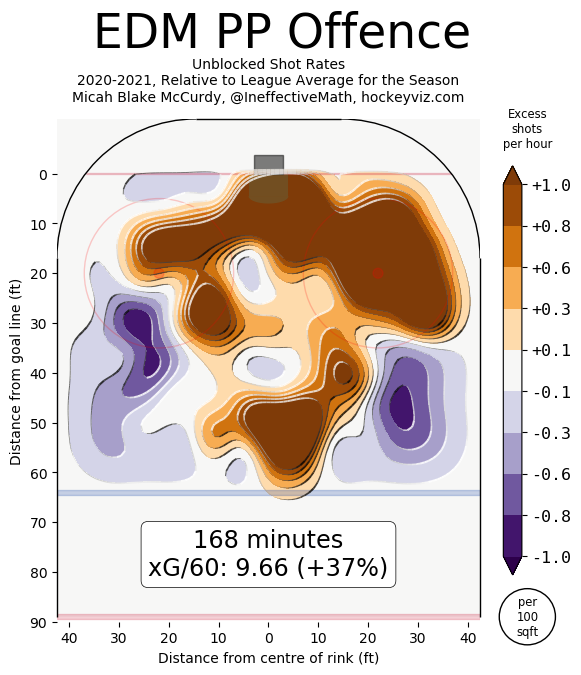 (HockeyViz)
Sutter wasn’t impressed with the lack of discipline.
Apparently the power play is never going to be effective again. Gaudreau blasted one in garbage time (maybe that gets him going a bit) but otherwise the man advantage was a complete mess again.
Personnel and units aside, I can’t fathom how or why there are so few looks and dangerous shots created at 5v4. They only have three attacks, all of which are pretty low danger and are not results from a seam or royal road pass:
The power play strategy needed a revamp yesterday.

I like Brett Ritchie but it’s probably time to get him away from Gaudreau. If you’re going to keep 23 and 13 together, they need a more skilled and speedy mate or one who is adept at retrieving pucks (Dube?). Honestly, it’s getting to the point where you’re going to have to split up 13 and 23, in my opinion. You need to get Gaudreau going. He is still the offensive driver of this team. Like it or not, the team won’t go very far if he can’t start generating some offensive results.
As mentioned, a tough night for the Backlund unit. I know the Flames are still trying the spread the wealth approach with their forward units but I think they are neutering themselves a bit. 11 and 88 are two of the best six offensive forwards on the team and should be utilized more in my opinion. Mangiapane, for my money, is your best 5v5 skater and playing him higher in the rotation is going to help you score some goals, which the team desperately needs. 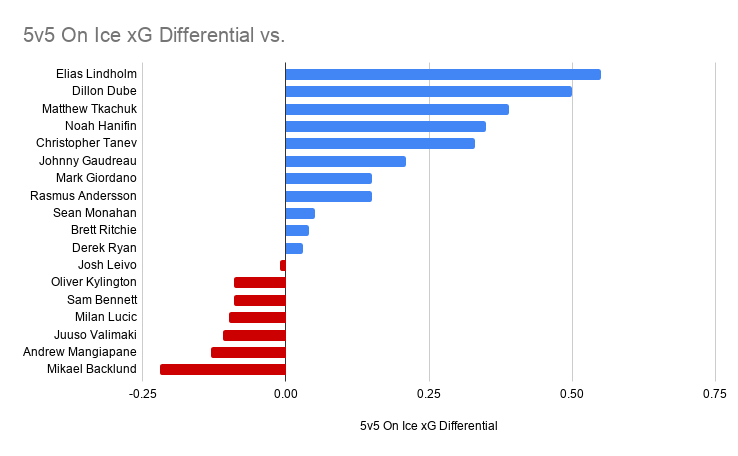 Markstrom had a shaky night. The third period stretch where things got out of hand were particularly  troublesome. Maybe he’s tired, maybe he’s still feeling some lingering injury effects, but he wasn’t himself last night. The team could have used a couple of big time saves and didn’t get them.
He’ll be fine though. He’s a warrior.

Again, it’s getting really old really fast to always get smoked by the Oilers. This recurring theme of letting things get out of hand is something I hope Darryl has a solution for. Does it only happen to us? Maybe it’s a more common occurrence not localized to Calgary (I mean Philly just lost 9-0) but it sure feels that the Flames have an above average propensity to lose in spectacular fashion.
Onto the Leafs, who are the only team more dangerous on the power play than the Oilers. Stay out of the box, eh?
Uncategorized
Recent articles from Mike W