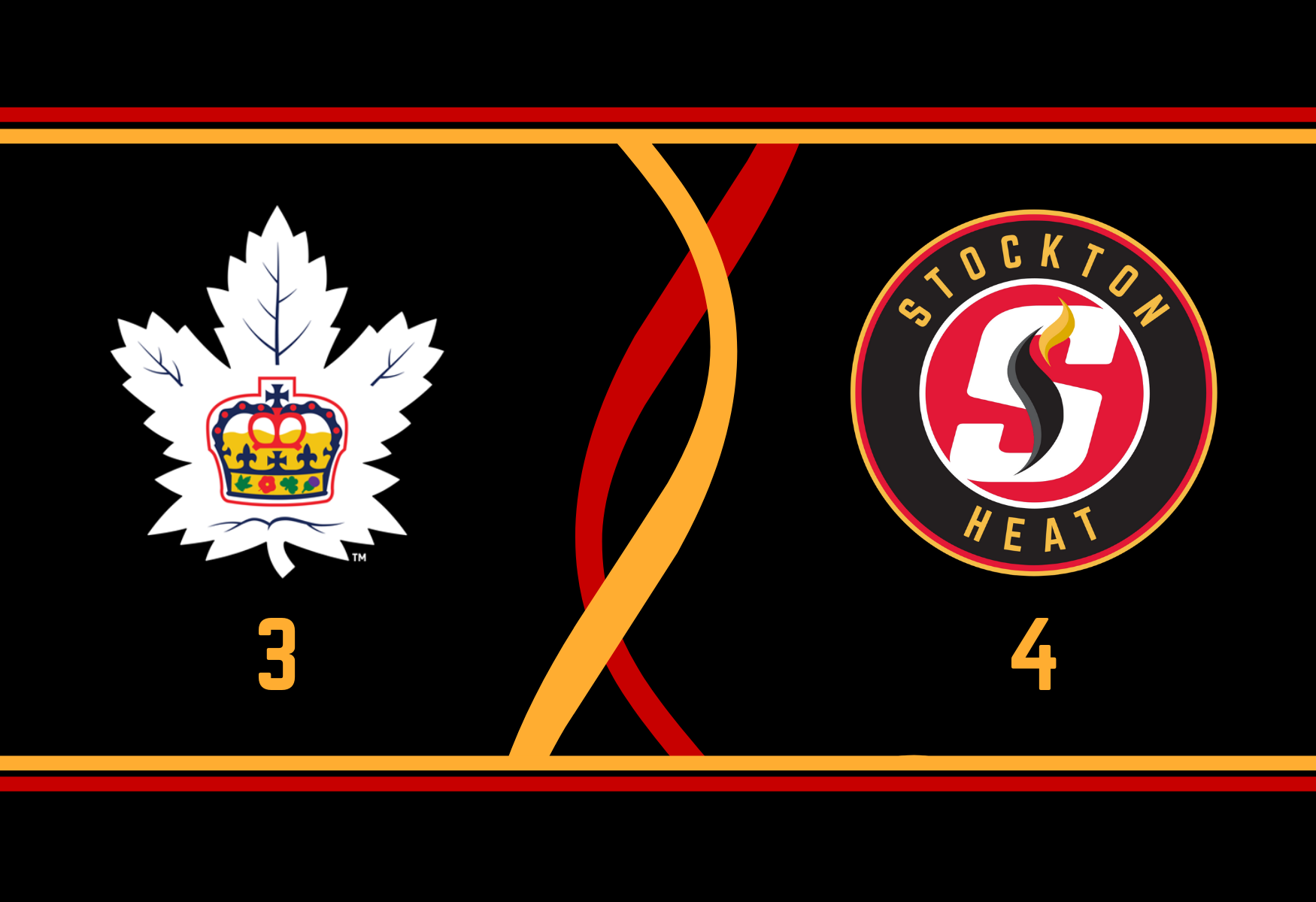 By Mike Gould
1 year ago
In the span of just two minutes on Saturday, the Stockton Heat went from sinking to cinco.
Connor Zary scored his third goal of the year and extended his point streak to five games as Stockton won its fifth game in a row. Zary’s linemates, Matthew Phillips and Adam Ruzicka, both saw their four-game streaks of multi-point contests end and were held off the scoresheet entirely in Saturday’s game.
The Heat led 2-1 early in the third period before surrendering back-to-back goals by Marlies skaters Alex Galcheynuk Teemu Kivihalme. After failing to convert on two consecutive power-play opportunities while down 3-2, the Heat finally found the offense they needed in the dying minutes of regulation.
Defensemen Zac Leslie and Alex Petrovic beat Marlies goaltender Andrew D’Agostini just 43 seconds apart with under 2:30 to play in regulation time, helping to seal a 4-3 victory for the road team.
Netminder Garret Sparks made 29 saves for Stockton, which now owns a 5-2-0 record and sits atop the AHL’s Canadian Division despite having played the second-fewest games in the entire league. D’Agostini allowed four goals on 22 shots for Toronto; his team is now 6-6-0 and has fallen into a tie with the Manitoba Moose for third in the division.
Here’s how it all happened.

Zary, as mentioned ad nauseum, is only 19 and technically ineligible to play in the AHL. (He’ll be returning to his WHL club in Kamloops after this current road trip ends.)
He has shown no sign of his supposed inexperience during his tenure with the Heat. Zary was Stockton’s best player in the opening frame on Saturday, helping to facilitate tremendous passing plays with his creativity and vision.
The Heat took the first penalty of Saturday’s game, with defenseman C.J. Lerby getting called for “delay of game” just 1:25 into regulation. The visitors successfully killed the infraction, with Ruzicka sealing the deal by sprawling to make a final clear while down a man.
Zary was rewarded for his excellent play early in this game with a fortuitous goal to open the scoring. Playing on a cobbled-together line with Giorgio Estephan and Eetu Tuulola following an injury to Alex Gallant, Zary corralled the puck behind D’Agostini’s net and fired a pass towards the slot.
The puck bounced high in the air off Marlies defenseman Kristians Rubins before landing on D’Agostini’s back and bouncing into the net. How does that saying about “being good to be lucky” go, again?
Shortly after Zary’s goal, the Heat looked to have an opportunity to double their lead. Teemu Kivihalme took a cross-checking penalty against Luke Philp 5:49 into the first period, but the Heat only registered one shot on their first man-advantage and ended up surrendering a game-tying goal as the penalty expired.
The goal came after Heat defenseman Zac Leslie over-committed to try and intercept a long stretch pass by Marlies rearguard Joseph Duzsak; the puck bounced off Leslie’s stick and right onto the tape of Rourke Chartier, who skated in all alone on Sparks and fired one top-shelf to make it 2-2.
The tremendous play of Stockton’s top line continued as the period progressed, with the below clip effectively showcasing just how dynamic and intelligent Matthew Phillips can be with the puck on his stick.
Despite that line’s great work, the Heat were out-shot 12-6 in period one and that trend continued into the middle frame. The Marlies had the only power play in the second period, recording one shot and failing to convert in the two minutes after Alexander Yelesin was called for slashing at the 17:30 mark.
The Heat led 2-1 after 40 minutes of play, with Emilio Pettersen going coast-to-coast to score his second AHL goal 5:27 into the second period.
The Marlies came buzzing out of the gate to begin the final period of play on Saturday. The home side scored on the first shot of the third, with the newly-acquired Alex Galchenyuk beating Sparks with a perfectly-placed shot under the blocker and off the post.
Galchenyuk has 136 NHL goals to his name and could soon earn an opportunity with the Toronto Maple Leafs if he continues to produce. Through four AHL contests, he has four points.
Luke Philp, who leads all members of the Heat with 21 goals since the beginning of the 2019-20 campaign, came within inches of restoring Stockton’s one-goal advantage moments later; D’Agostini managed to locate the puck behind him and cover it with his glove.
Stockton’s missed opportunities paved the way for the Marlies to gain their first lead of the game. They did just that at the 5:12 mark of the third period, with Teemu Kivihalme cutting across Sparks’ crease after receiving a pass from Galchenyuk and tucking in a shot under the goaltender’s pad.
The Marlies registered the next five shots on goal following their go-ahead marker, but it was the Heat who subsequently converted to tie the game.
After Martin Marincin fanned on a shot at his offensive blue line, the Heat took the puck back the other way. Justin Kirkland and Glenn Gawdin connected on nice passes before Leslie, whose mistake led to Toronto’s second goal, redeemed himself with a clutch game-tying tally.
The Heat entered Saturday’s game having yet to taste any overtime action.
They’re still waiting. Less than a minute after Leslie’s goal, Heat captain Alex Petrovic fired a blast from the right point which deflected off the stick of Marlies forward Adam Brooks and past D’Agostini. Petrovic’s second goal of the year made it a 4-3 game, a score which would hold until the final buzzer.
The Marlies out-shot Stockton in all three periods, doing so by a 10-9 count in the third and 32-22, overall.

The Heat received contributions from all four lines in Saturday’s game, with 11 different players contributing one point en route to the victory. Ruzicka and Phillips were held pointless but the depth of Stockton’s lineup countered the quiet nights for the team’s stars.
After a rough start to his Heat tenure, Sparks is doing a good job of finding his game. The 27-year-old goaltender is now 3-1-0 on the year with a .916 save percentage.
Stockton’s power play was quiet but their penalty-killing was perfect again, going 3-for-3. At 91.3% effectiveness, the Heat have the second-best PK in the league. Even without scoring on Saturday, the Heat’s 40.9% power-play still ranks as the AHL’s best.

Connor Zary has been one of Stockton’s most consistent players all year long and was fantastic in Saturday’s game, making things happen in the offensive zone on nearly every one of his shifts.
It really is a shame that Zary is required to return to the Western Hockey League later this month. He is, without a doubt, a very good AHL player at this point in time, able to keep up with the pace and make confident and skilled plays with and without the puck.

So long, Toronto! The Heat are finished with the Marlies for now, heading off to Winnipeg for a four-game series against the Manitoba Moose beginning on Monday. Stockton and Manitoba will meet for the first time this year on Mar. 8 at 5 p.m. MT. You can catch the game on AHL TV; I’ll be posting updates on Twitter at @miketgould.
Uncategorized
Recent articles from Mike Gould