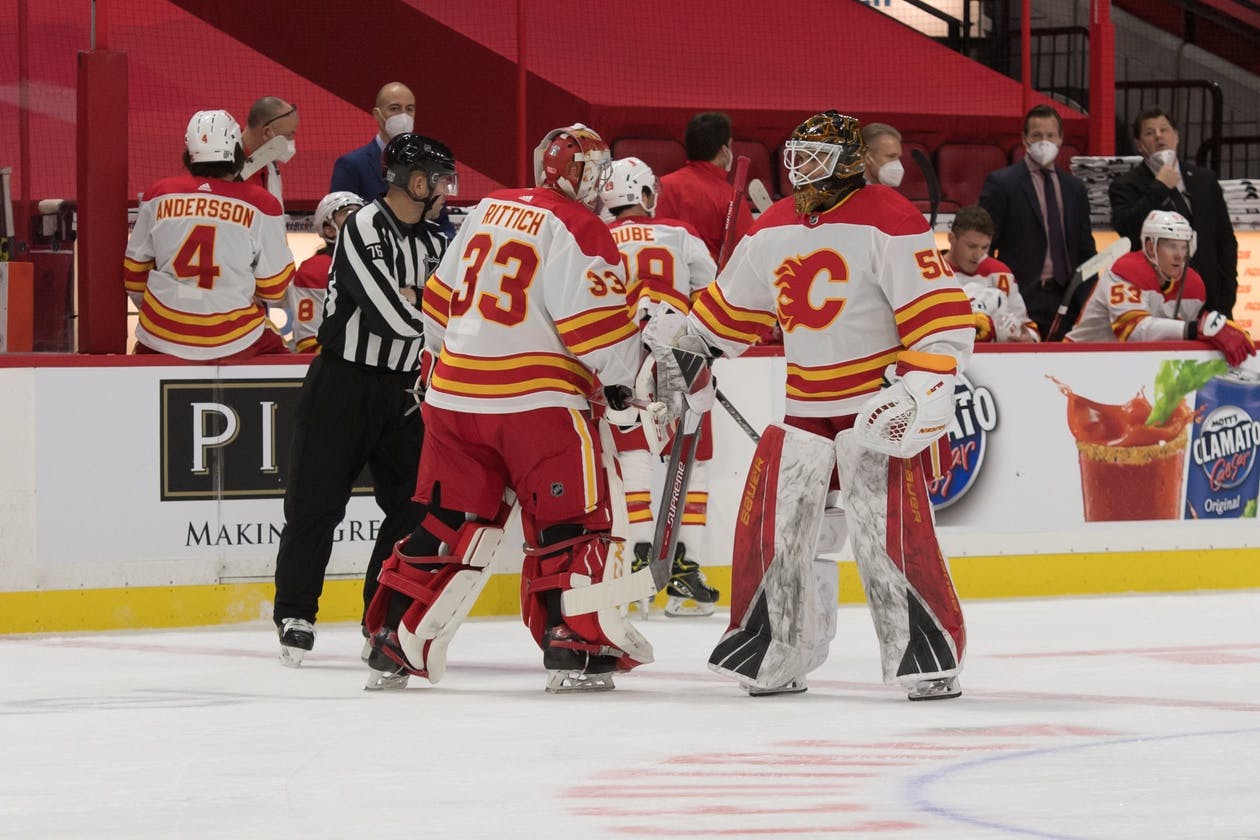 By Ryan Pike
1 year ago
The Calgary Flames took three of four points from the Toronto Maple Leafs. They weren’t perfect, but they had nice energy and battle level and generally defended well. On Thursday in Ottawa, though, it appeared that their gas tank ran empty in the final two periods in the back half of a back-to-back stretch.
The Flames took one in the teeth, losing 6-1 to the Senators in their first of four consecutive games against Ottawa.

Rittich made the initial save on Tim Stuetzle, but booted rebound into the net-front area and Drake Batherson put the loose puck past the Flames goaltender to make it 1-0 Ottawa.
A minute and a half later, the Senators struck again. The Flames caused a turnover in their own zone but couldn’t connect on an exit pass. Chris Tierney grabbed the loose puck and passed to the point to Erik Gudbranson. Gudbranson fired the puck through traffic and it beat Rittich to make it 2-0 Ottawa.
Shots were 13-5 Senators and scoring chances 8-4 Senators in the first period.
The Flames cut Ottawa’s lead to one early in the second period. Dillon Dube and Milan Lucic worked a give-and-go play, with Lucic’s shot from the face-off circle glancing in off Matt Murray to make it a 2-1 hockey game.
But that didn’t last. A few minutes later, Rittich passed the puck around the boards to Lucic. Lucic lost control of the pass and it spat off his stick to Connor Brown. Brown was able to skate across the Flames zone and tuck the puck past Rittich with a backhand shot to make it 3-1 Senators.
Erik Brannstrom got a freebie a few minutes later, as he dumped the puck in from the neutral zone and the shot eluded Rittich to make it 4-1 Senators. Rittich’s night ended a little bit later, as backup Artyom Zagidulin came into the game in relief at the mid-period TV timeout.
Shots were 10-10 and scoring chances 7-2 Senators in the second period.
Colin White made it 5-1 a few minutes into the third period, as his shot was slowed down by Noah Hanifin and squirted between Zagidulin’s pads.
White added a second goal late in the period, as Thomas Chabot pinched to support Evgenii Dadonov’s drive into the zone, then found White all alone in front. His shot made it 6-1 Senators.
Shots were 15-8 Flames and scoring chances 12-10 Flames in the third period. (But remember: score effects.)

This was Vintage Flames Loss hockey.
They were disjointed, lacked execution and generally seemed to lose a lot of puck battles, especially as the game wore on. Sure, they were the victims of some bad bounces and puck luck, but they’ve been good enough in the past to overcome bad luck. Playing a relatively fresh Senators club playing with house money – the hockey establishment expects nothing from them, after all – the Flames often looked liked a bunch of players skating around rather than a coherent, cohesive five-man team.

Juuso Valimaki had a bunch of shots and wasn’t on for any goals against. Well done, young man.

The Flames really seemed deflated by both of the second period goals. They got themselves back within a goal, then a defensive zone turnover and a shot from the neutral zone put them down three with half of a game to go.

The Flames (9-10-2) are back in action on Saturday in Ottawa. Be aware, it’s an 11 a.m. MT start on Sportsnet West, so load up on coffee and your favourite breakfast foods and enjoy some ice hockey (and brunch).
Uncategorized
Recent articles from Ryan Pike