Post-Game: Close but no cigar for Flames against Leafs 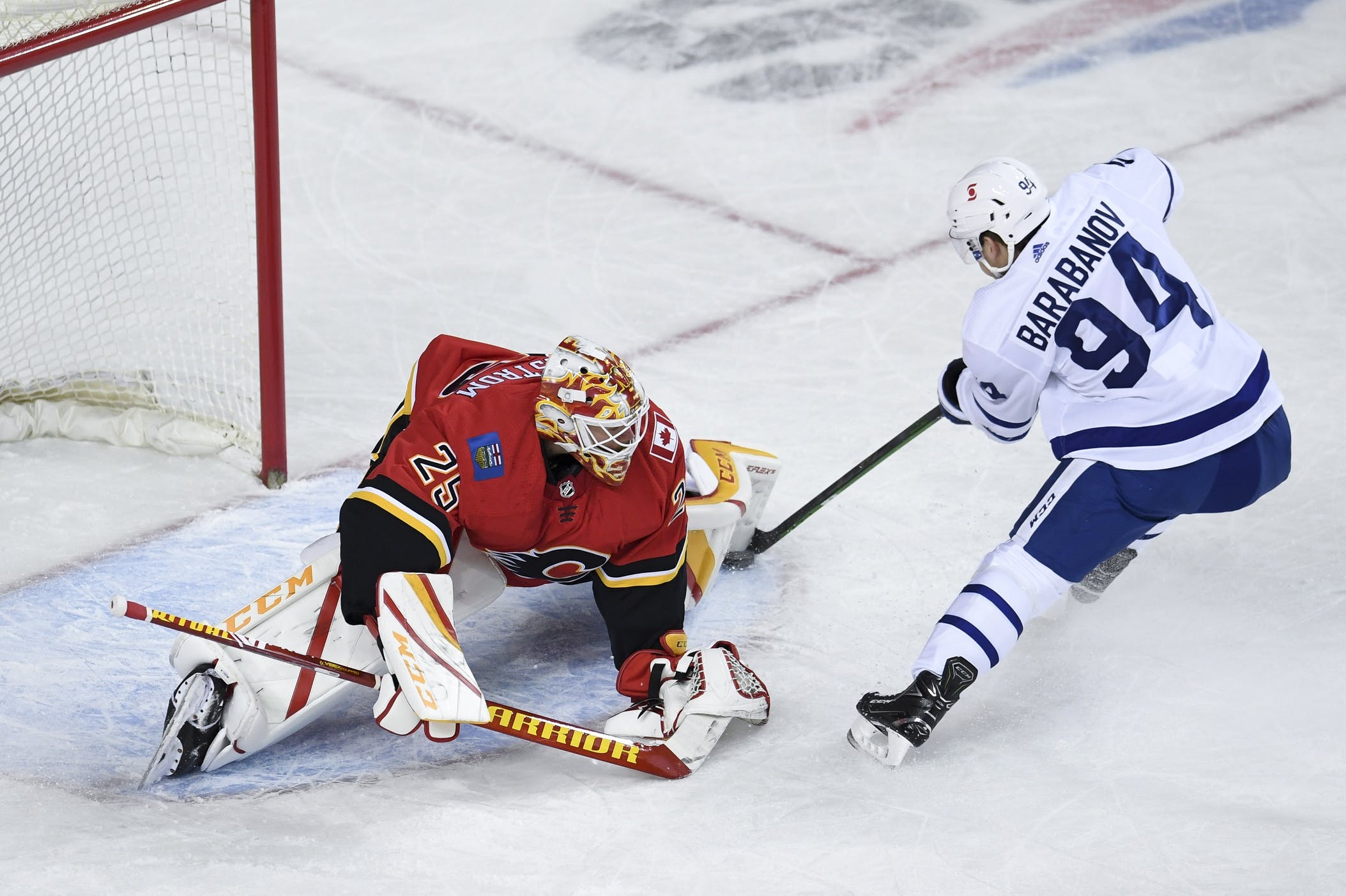 By Ryan Pike
2 years ago
The Calgary Flames played for the first time in six days on Sunday afternoon against the Toronto Maple Leafs. The Flames looked occasionally a bit rusty, particularly with their puck management, but they were right there with the Leafs for much of the game.
A couple bounces were the difference in a razor-thin 3-2 home loss to Toronto.

The first period was pretty even, with both teams getting their looks and both goaltenders making big saves. But the road team opened the scoring midway through the period.
The Leafs spent a bit of time in the Flames zone. Jake Muzzin made a shot from the left point. Dominik Simon challenged the shooter in an attempt to block the shot. He got a piece of it, but the piece he got caused it to careen to the far post and just pick the top corner, past Jacob Markstrom, to gve the Leafs a 1-0 lead.
Shots were 10-7 Leafs and scoring chances 8-7 Flames in the first period.
The second period was more of the same for both sides: the Flames having the puck more but the Leafs executing better with it. The Flames pulled even midway through the frame off a nice bit of work by Sean Monahan’s line. Dominik Simon’s stretch pass sent Johnny Gaudreau into the offensive zone. Gaudreau couldn’t bury a wrap-around attempt, but a pinching Noah Hanifin set up Monahan at the side of the net. He chipped his own rebound past Jack Campbell to make it a 1-1 hockey game.
But late in the period, Nikita Nesterov went off for slashing Alexander Barabanov. On the resultant power play, the Leafs needed just eight seconds for Wayne Simmonds to deflect the puck past Markstrom to give the Leafs a 2-1 lead heading into the intermission.
Shots were 14-11 Leafs and scoring chances 10-6 Flames in the second period.
The Leafs extended their lead early in the third period off a weird bounce in front of the net. A puck thrown towards the slot by Morgan Rielly went in off Auston Matthews and Rasmus Andersson’s skate to make it 3-1 Toronto.
But the Flames clawed back. Simon drew a holding penalty to send the Flames to a man advantage. 16 seconds into PP, Elias Lindholm’s shot with a big Matthew Tkachuk screen beats Campbell to cut Leafs lead to 3-2.
But that’s as far as the Flames got. They pressed late and pulled Markstrom for the extra attacker, but the Leafs held on for the victory.
Shots were 13-8 Flames and scoring chances 8-7 Flames in the third period.

They couldn’t execute quite well enough with the puck to win. They had a lot of zone time. They had some good looks. But they had a few too many bobbles or missed nets to win. The lack of execution, unfortunately, put them at the mercy of the bounces. A couple odd bounces on a couple Toronto goals swung the game, but it wasn’t like the Flames looked awful.

Let’s give it jointly to the Flames’ first line, as Mangiapane, Elias Lindholm and Matthew Tkachuk were possession monsters and the team’s most consistently dangerous trio.

The late second period goal was a rough one. The Flames got a bit turned around in their own zone, took a minor, and then were scored on eight seconds in their PK (in the final minute of the period). If they could’ve made it to the intermission tied, you get the sense that the game could’ve been much different.

This was TJ Brodie’s first game back after leaving the Flames in the off-season as a free agent.

The Flames (2-1-1) are back in action on Monday night when they host the Maple Leafs again.
Uncategorized
Recent articles from Ryan Pike