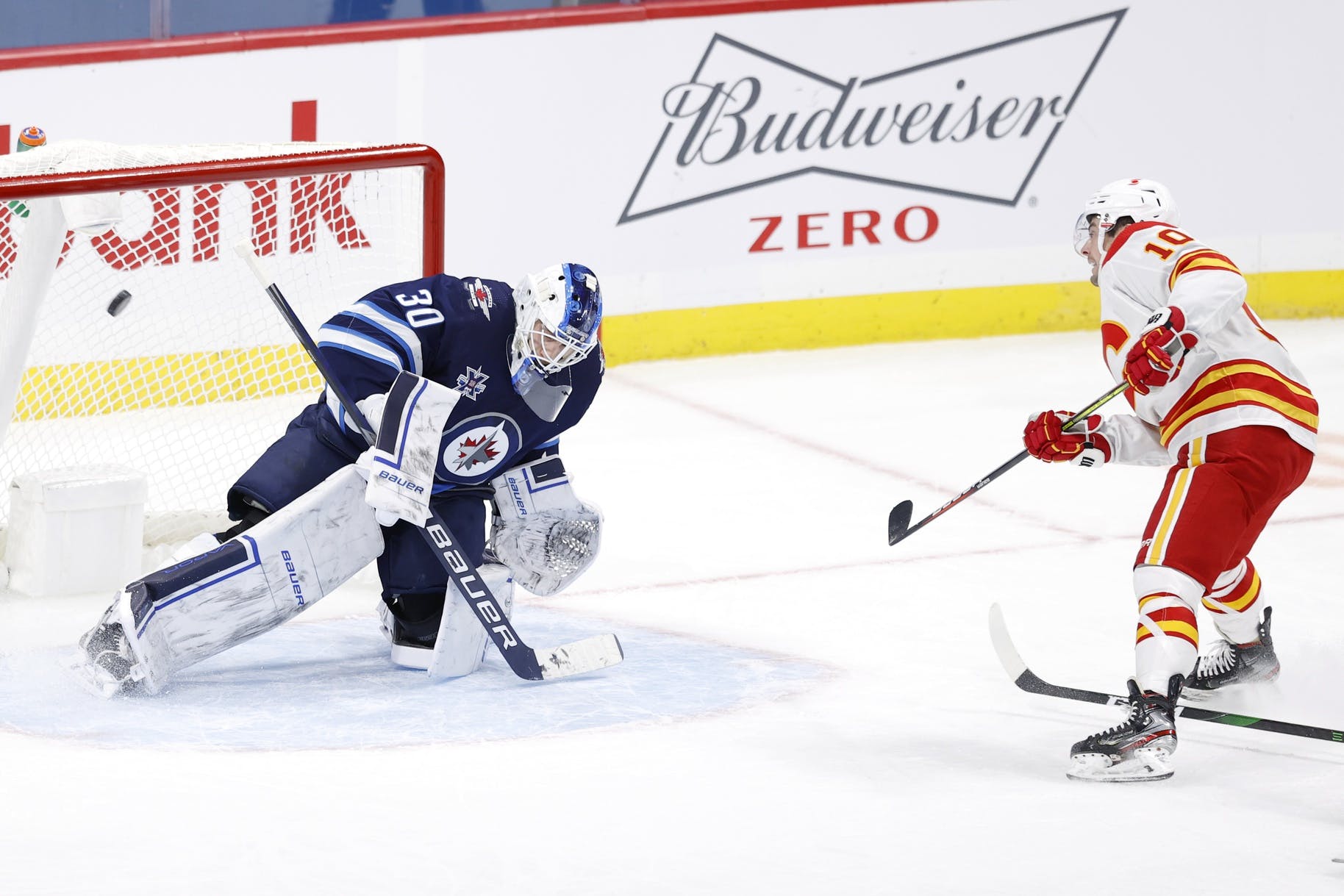 By Ryan Pike
1 year ago
On Monday, the Calgary Flames got down early in the game but managed to rally back against the Winnipeg Jets. On Tuesday, they couldn’t quite get a comeback going and the Jets played a smart, structured game. The Flames lost to Winnipeg by a 3-2 score to even up their three game series at one win apiece.

The first period was pretty even, though a few miscues by the Flames gave the Jets a lot of momentum. An early Flames power play didn’t generate very much, but Milan Lucic turned the puck over to Mason Appleton in the neutral zone. Appleton skated behind the Flames net unopposed, then found Trevor Lewis in the slot. Lewis beat Rittich to make it 1-0 Jets with a shorthanded goal, the third the Flames have allowed this season.
30 seconds later, the Jets struck again: Neal Pionk stepped out of the penalty box and joined the rush. He found a pinching Derek Forbort with a pass, and Forbort’s shot eluded Rittich to give Winnipeg a 2-0 lead.
The Flames responded back on the rush, 35 seconds later. Dillon Dube found Matthew Tkachuk with a dandy pass for a back-door tap-in to cut the lead to 2-1 Jets.
But the Jets responded back before the end of the period. Nikolaj Ehlers made a heck of a deflection, putting a Dylan DeMelo shot that was going wide past Rittich and into the Calgary net to make it 3-1 for the Jets.
Shots were 11-8 Jets and scoring chances 7-6 Jets in the second period.
Neither team scored in second. The Jets seemed content to run down the clock and did their level best to clog up the neutral zone and the home plate area in their own zone. Shots were 12-6 Jets and scoring chances 7-7 Flames in the second period.
The visitors pressed and midway through the third period, the Flames finally got one back. Tkachuk was sprung on a breakaway but couldn’t bury the chance. Johnny Gaudreau shelved it, but it clanged off the crossbar and stayed out. In all the confusion, Tkachuk poked in the loose puck to cut Winnipeg’s lead to 3-2.
Shots were 16-5 Flames and scoring chances 9-5 Flames in the third period.

Until the third period, they just couldn’t find their swagger offensively. Up until that point, they couldn’t get chances – and when they did, they couldn’t bury their opportunities. The Jets were opportunistic, the Flames weren’t, and the Jets managed to dictate the pace once they got a lead.

Tkachuk scored twice, so lets give him the nod.

Two goals against in 30 seconds on the road did a lot to put the Flames behind the eight-ball. They never quite got the momentum fully back.

The Flames have allowed the opening goal six times this season, and they’ve been out-scored 12-6 in first periods so far this season.
Sam Bennett and Andrew Mangiapane swapped spots in second period – Bennett joining Gaudreau and Monahan, with Mangiapane joining Backlund and Leivo. The lines were further shuffled in the third aside from Gaudreau-Monahan-Bennett: Tkachuk joined Backlund and Mangiapane, Leivo joined Lindholm and Lucic, and Dube joined Ryan and Nordstrom.
Gaudreau has registered at least a single point in every game this season.

The Flames (4-4-1) and the Jets will do this once more time on Thursday night. Once again, it’s a 6 p.m. MT start on Sportsnet West.
Uncategorized
Recent articles from Ryan Pike