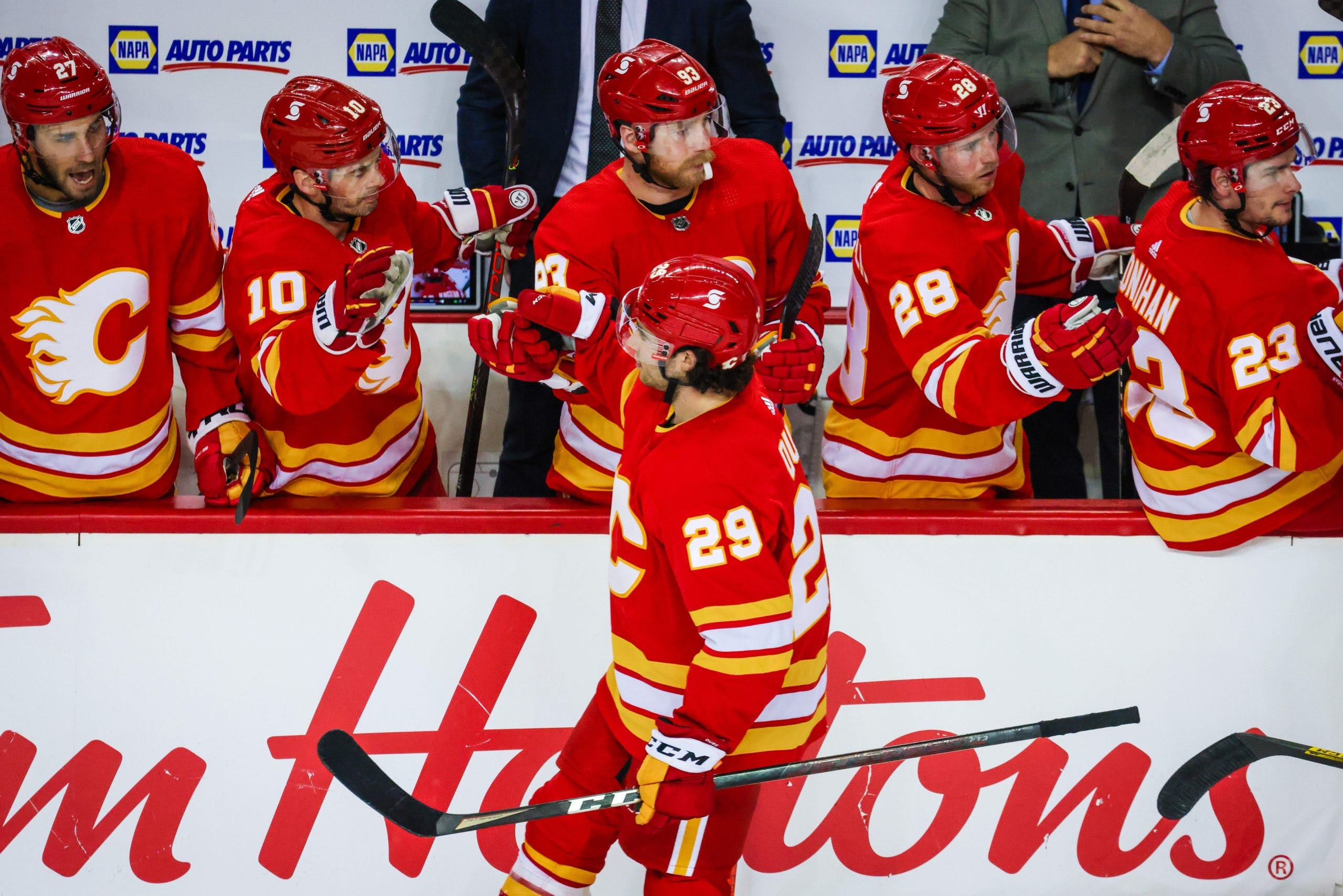 By Ryan Pike
2 years ago
On Thursday, the Calgary Flames were a team with lofty highs and cringey lows in Winnipeg. On Saturday, they were much more consistent for 60 minutes en route to a 3-0 win over the Vancouver Canucks to kick off the home side of their 2020-21 schedule.

Both teams seemed a bit disjointed at even strength, which led to gaffes, miscues, and penalties. After Juuso Valimaki drew a penalty in the Canucks zone, the Flames took advantage of the power play. A quick passing play ended with Sean Monahan from the slot burying a Matthew Tkachuk feed to give the home side a 1-0 lead.
After a couple Flames penalties the Canucks got 82 seconds worth of a two man advantage. But the Flames held them to just two shots due to the combined work of Mark Giordano, Chris Tanev, Derek Ryan and Elias Lindholm and got to the intermission with the lead intact.
Shots were 11-7 Canucks in the opening period, but scoring chances were 9-4 Flames.
Almost half of the second period was played with someone from one of the teams in the penalty box, as the two clubs combined for five minors. The Flames got a five-on-three of their own (for 16 seconds), but didn’t score.
Late in the period, the Flames finally cashed in. With their second PP unit on, Dillon Dube hollered to Andrew Mangiapane for a pass. Mangiapane made a nice back-hand pass to Dube, who teed off on the one-timer to give the Flames a 2-0 lead.
Shots were 15-10 Flames and scoring chances 8-4 Flames in the second period.
The Flames carried play throughout much of the third period. After Giordano had the stick hacked out of his hands on a scoring chance, Tkachuk chipped a rebound past Braden Holtby to give the Flames a 3-0 lead.
Shots were 13-11 Flames and scoring chance 5-4 Canucks in the third period.

This was an odd game, as the frequent penalties killed the flow of the game (and likely made it tough for either team to get momentum going at even strength). The Flames were the better team at five-on-five, but not overwhelmingly so. But they were quite good at special teams – scoring three times and holding the Canucks off the board – and that was enough to tilt the game decidedly in their favour.

The oldest player in the game, Giordano played more than any other Flames played. Only Quinn Hughes played more from either team.
In his first home game as a Flame, Jacob Markstrom was superb and a calming influence in the blue paint. He gets the honourable mention.

There were two, really.
The first was the Flames kill of Vancouver’s two man advantage in the first period. The kill gave them momentum and sent them into the intermission with a lead.
The second was the Dube goal. This was a clunky enough game at five-on-five that it seemed probable that one team or the other would give up a weird goal at even strength. A two goal lead gave the Flames a bit of breathing room in a weird game.

The Flames have (a) scored first in both of their games this season and (b) haven’t actually trailed during a game this season.

The Flames (1-0-1) are back in action on Monday night when they host the Canucks once again. (After that game, they’ll be off for six days because 2020-21 is a wacky, weird season.
Uncategorized
Recent articles from Ryan Pike