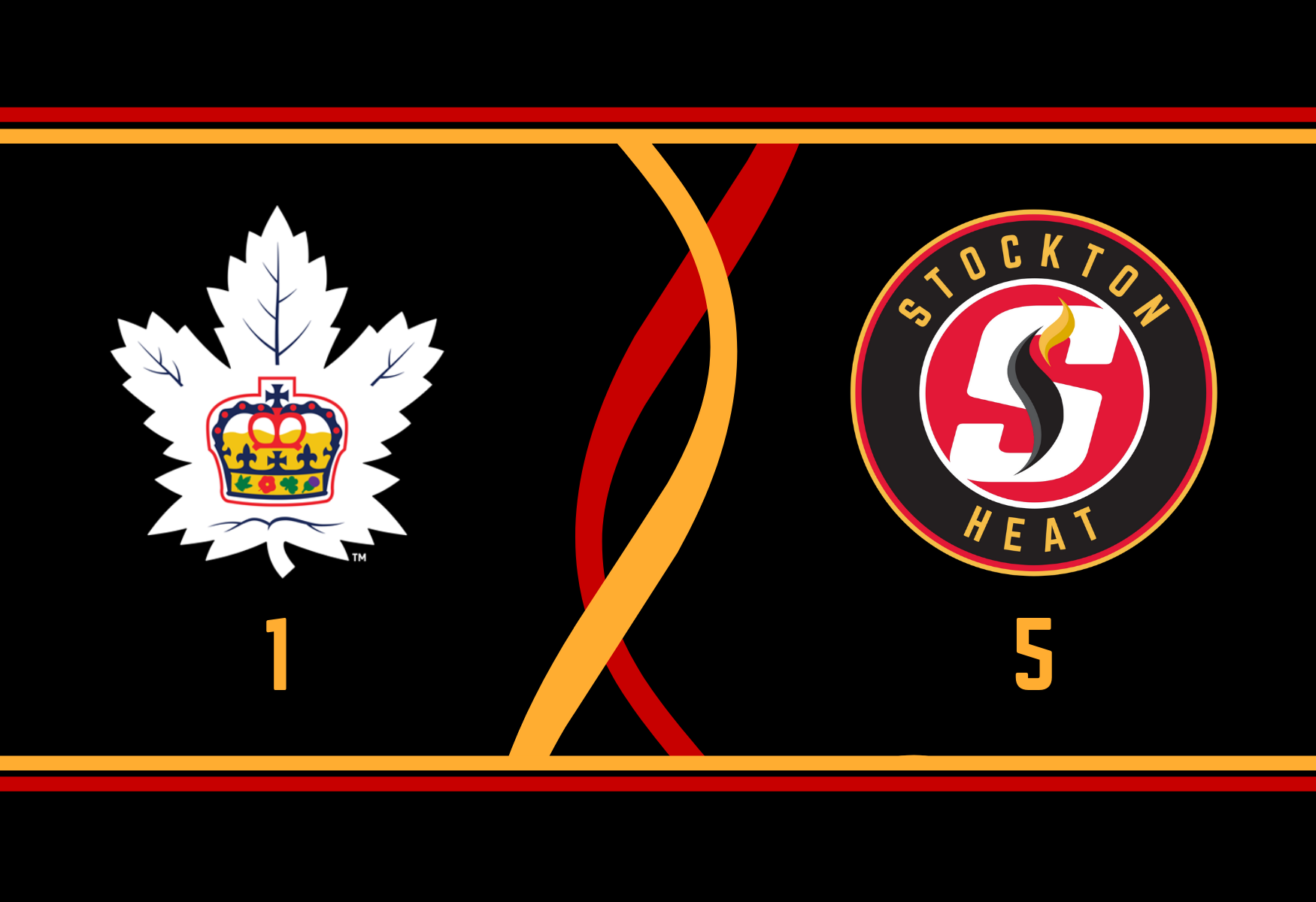 By Mike Gould
1 year ago
After two games, it seemed like the Stockton Heat might soon become sick of playing against the Toronto Marlies.
Now, with three more head-to-head matchups in the books, that narrative looks to have firmly swung in the opposite direction.
The Marlies outscored the Heat by a 12-2 margin in Stockton’s first two games of the 2020-21 season. Since then, the Heat have bested Toronto by 4-2, 8-1, and 5-1 scores, mixing in a commanding 4-1 decision over the Belleville Senators along the way.
The hunted have now become hunters. Stockton’s big guns are on a world-beating tear at the moment, with top-line centre Adam Ruzicka having amassed 12 points over his last four games and winger Matthew Phillips contributing nine points in those outings.
19-year-old Connor Zary has also played a key role on Stockton’s top line mere months after being selected in the first round of the 2020 NHL Entry Draft. He set up Ruzicka’s first goal in Friday’s game and remains at a point-per-game pace this year.
Friday’s game was a feisty, back-and-forth affair that the Heat had the upper hand in from the beginning. Let’s take a closer look.

Marlies goaltender Andrew D’Agostini struggled in his last outing against the Heat, surrendering eight goals in the first 40 minutes of the Feb. 26 contest before being pulled.
D’Agostini had previously done a stellar job of stymieing Stockton’s sharp-shooters, making 79 saves on 85 shots in the first three games of Toronto’s four-game set in Calgary. He channelled those performances early in Friday’s contest, particularly with this fantastic save on Phillips…
…and this denial of an Emilio Pettersen attempt, which came following an impressive rush for the Norwegian rookie…
…and this desperation larceny on Phillips late in the first period…
…and, early in the second frame, yet another cross-crease rejection against Stockton’s star No. 11…
…and, finally, this last-second kick save on Colton Poolman. I genuinely didn’t realize until just now how many highlight-reel stops D’Agostini made in this game. The Heat outshot the Marlies 12-7 in the first period—the score remained 0-0 after 20 minutes—and continued to pour it on in the second.
Finally, at the 10:35 mark of the middle frame, the dam broke. Ruzicka entered Friday’s game as the first Stockton Heat player to ever record three consecutive three-point games; he opened the scoring tonight with a beautiful shot over D’Agostini’s glove for his sixth goal in four games.
Under six minutes later, the Heat doubled their lead on the power play. Team captain Alex Petrovic fired a shot from the point towards D’Agostini; the Marlies’ netminder made the initial save, but Martin Pospisil was there to jam in a rebound for his second goal of the year.
The Heat made it 3-0 just 37 seconds later, with Petrovic again factoring into the goal. The big right-handed defenseman took a shot from distance towards D’Agostini that Eetu Tuulola redirected into the Marlies’ net. Tuulola’s first goal (and point) of the season came on Stockton’s 14th (and final) shot of the middle frame.
Toronto’s Colt Conrad quickly responded to Stockton’s two quick goals, converting in tight on Sparks off a Martin Marincin feed to make it a 3-1 game. The Marlies only generated four shots in period two.
With Stockton controlling play by a wide margin, the Marlies sought to create some sparks with their physicality. First, team captain Rich Clune got into a fight with Heat tough guy Alex Gallant with 38 seconds to play in the second period.
As time expired in the second 20, forwards Scott Pooley and Justin Kirkland got into a small fracas by the penalty boxes.
As expected, the home side came out with a strong push in the second period. Conrad very nearly scored his second of the night under five minutes into the third, managing to draw Sparks out of his crease but barely missing with his attempted bank shot from behind the net.
The Heat managed to generate some opportunities of their own, even when down a man. Both Stockton Connors (Mackey and Zary) took two-minute minors in the third period; during Zary’s penalty, Glenn Gawdin managed to steal the puck and go in for a breakaway on D’Agostini. Gawdin could not capitalize and is still looking for his first point of the season through two games.
Ruzicka made it 4-1 just over five minutes later with a power play goal. Phillips’ pass to set up his centre deserves just as much love as Ruzicka’s assured finish.
Speaking of Phillips passes… check out his agility and edgework in the clip below, where he set up Connor Mackey for the 5-1 goal. What an impressive play to quickly stop and find the open trailer.
Mackey’s first professional goal beat Marlies goaltender Kai Edmonds, who entered the game after Ruzicka’s second goal—presumably, to give D’Agostini a breather.
Toronto outshot its guests by a 17-5 margin in the third period but went zero-for-four on the power play in the final 20 minutes.

Once again, the Heat got off to a great start and dominated whenever head coach Cail MacLean deployed the top trio. Phillips, Ruzicka, and Zary continued to shine on Friday, combining for seven points.
Ruzicka has now recorded three points in each of his last four games. The 21-year-old centre now leads the entire AHL in scoring despite being on the team with the fewest games played. All of his points have come during Stockton’s four-game winning streak.
The Heat also received very good goaltending, particularly as the Marlies played with increased energy later in the game. Sparks made 27 saves on 28 shots for his second consecutive win.

We went with Ruzicka in the last game but it would be disingenuous to deny this distinction from him tonight. Everything he touches right now is turning into gold or, should I say, goals.
Ruzicka’s chemistry with Phillips is palpable—they almost resemble an AHL version of Johnny Gaudreau and Sean Monahan in the way they feed off each other. Phillips also had an incredible game, racking up three assists when he could have also had a hat trick.

More Heat/Marlies action is coming very soon! The two teams will do battle at the Coca-Cola Coliseum once again tomorrow at 1:00 p.m. MT. You can catch the game on AHL TV; I’ll be posting updates on Twitter at @miketgould.
Uncategorized
Recent articles from Mike Gould