Post-Game: Leafs pull away from Flames to win late, again 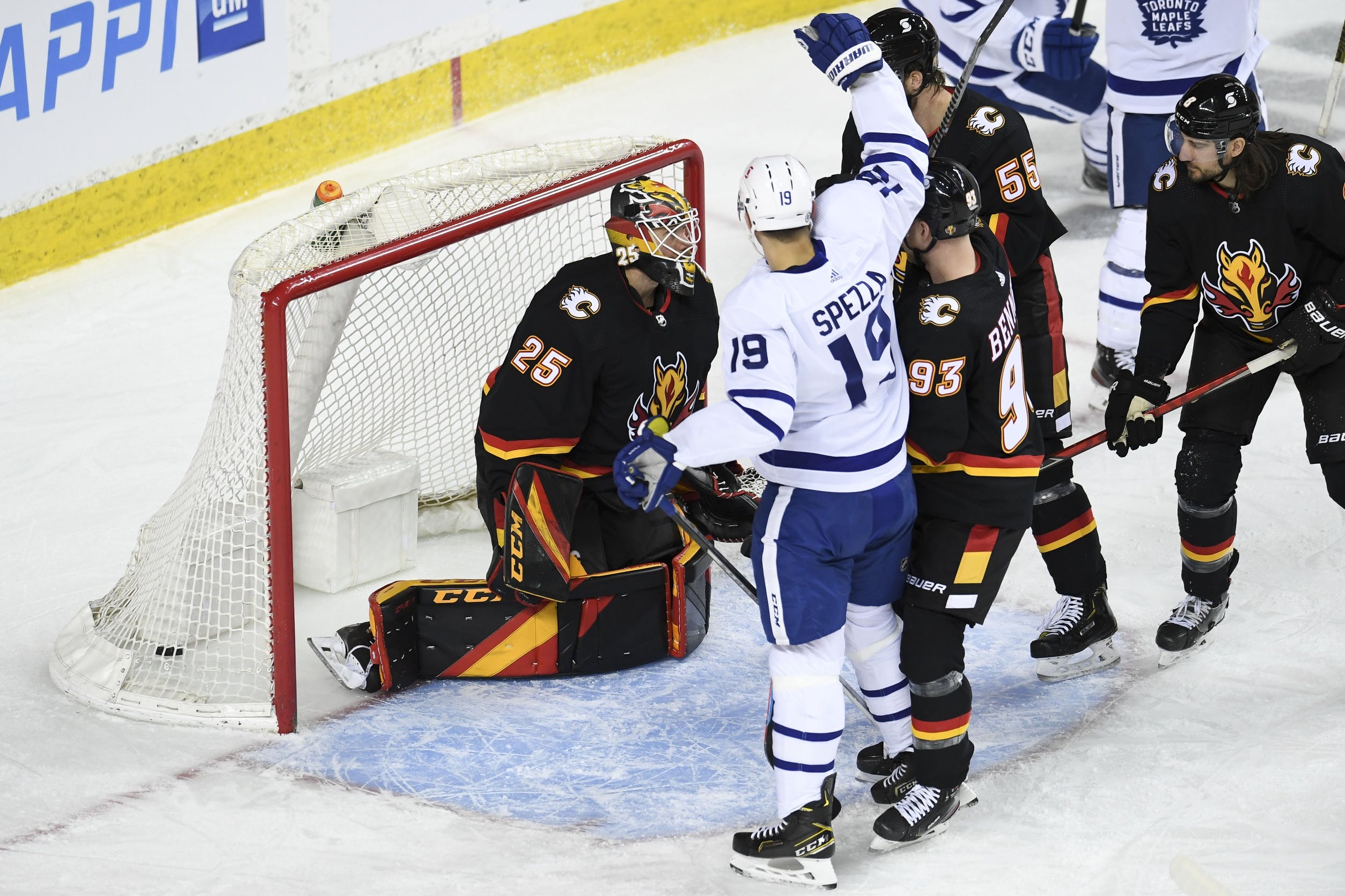 By Ryan Pike
1 year ago
The Calgary Flames played pretty well for big stretches of Monday night’s game with the Toronto Maple Leafs. They certainly weren’t blown out or embarrassed. But as has become customary, the Flames made key errors at key times leading to great scoring chances and their goaltending couldn’t bail them out. The Flames lost 5-3 to the Leafs, who scored three times in the third period.

The Flames played a pretty decent first period, with the fourth line looking good and nearly scoring. They got a puck past Jack Campbell, but Travis Dermott stopped the puck on the goal line. (It was kicked towards the line by Sam Bennett, so Dermott saved us all a lengthy and mentally draining goal review.)
Shots were 10-6 Flames and scoring chances 10-6 Flames in the first period.
The Leafs made another big defensive save – this time by Justin Holl – and a little bit later they scored a goal. Alex Kerfoot beat out Chris Tanev in a puck battle behind the net and he started skating out. Noah Hanifin left Jason Spezza, in the slot, to pressure Kerfoot. Kerfoot’s pass got through and Spezza buried it to make it 1-0 Leafs. (Based on the replays, it seems like Hanifin expected Sam Bennett to take over on Spezza, but that didn’t happen.)
The Leafs got another one off the rush. Derek Ryan lost the puck at the Leafs blueline. The Leafs transitioned quickly and broke into the Flames zone on a three-on-two. William Nylander found Auston Matthews, and Matthews beat Markstrom top shelf to make it a 2-0 Leafs lead.
But the Flames got on the board before the period ended. Milan Lucic collided with TJ Brodie behind the net on the forecheck. (Many Leafs fans likely weren’t fans of the takedown.)
But the hit led to a turnover, and a Hanifin shot glanced off Brodie’s stick and went right to Andrew Mangiapane for the tap-in to cut Toronto’s lead to 2-1.
Shots were 12-9 Leafs and scoring chances 15-11 Flames in the second period.
The Flames tied things up early in the third period. Off a face-off win, Mikael Backlund’s shot glanced off Dermott’s skate and past Campbell to make it 2-2.
But about three minutes later, the Leafs retook the lead. The Flames couldn’t clear the zone and that allowed Pierre Engvall time and space to operate. He chucked the puck to the front of the net where Wayne Simmonds – dealing with both Mark Giordano and Rasmus Andersson – somehow to his stick on the puck for a redirect past Markstrom to make it 3-2 Leafs.
But about three minutes later, the Flames tied it up (again). On the penalty kill, Backlund created a turnover and then went up with Elias Lindholm on a two-on-one. He fed Lindholm, who passed back to Backlund for a redirect that made it a 3-3 game.
But about a minute later, the Leafs PP finally cashed in. The Flames were overwhelmed in the net-front area and Matthews jammed in the loose rebound to give Toronto a 4-3 lead.
The Flames couldn’t clear the slot after an initial Toronto scoring chance was blocked. Amidst all the confusion, and with five black jerseys in the area, John Tavares grabbed the puck and beat Markstrom with a wrister to make it 5-3 Toronto.
Calgary got a late power play, but it was wiped out by a high-sticking double-minor by Mangiapane. The Leafs held on for the victory. Shots were 12-10 Leafs and scoring chances 5-4 Leafs in the third period.

CTV’s Glenn Campbell put it succinctly:
The Flames played well in two zones for much of the game, but the mistakes they consistently made in their own end made their lives miserable and cost them the game.

Backlund scored twice, so we’ll give it to him.

The Flames battled back to tie the game twice in the third period. But Tavares’ insurance marker was a tough one to give up, especially so soon after the Flames were similarly victimized by defensive confusion on the penalty kill off a rebound. A two goal deficit in the third period was just too tall an order for this crew.

The Flames shuffled the lines in the third period:
Mangiapane’s double-minor was reviewed by the referees, as apparently it was thought that Zach Hyman was high-sticked by someone else – perhaps by his own team. It was upheld.

The Flames (16-21-3) are back in action on Saturday night when they host the Edmonton Oilers.
Uncategorized
Recent articles from Ryan Pike