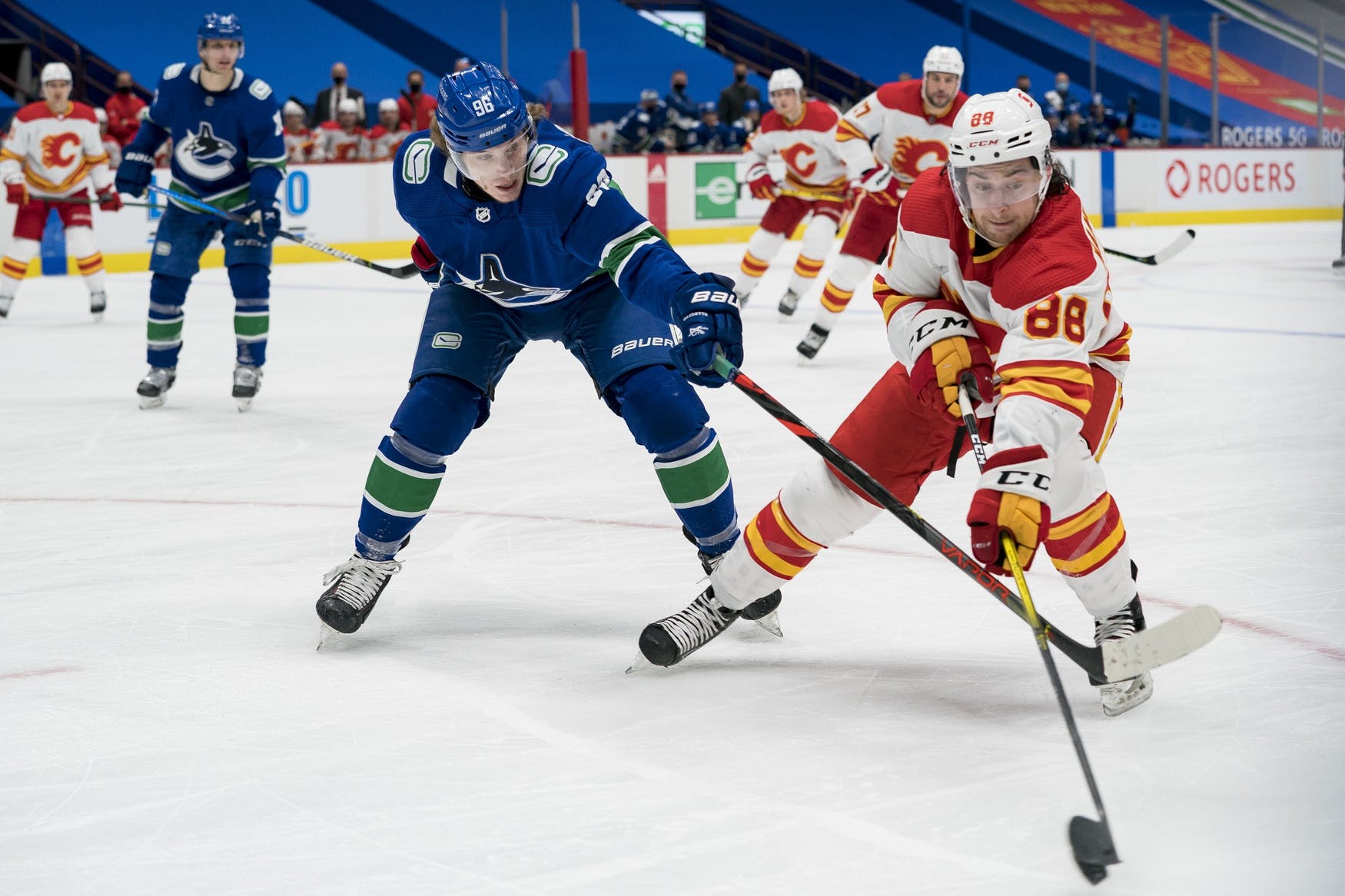 By Ryan Pike
1 year ago
The Calgary Flames didn’t exactly blow the doors off of the Vancouver Canucks. They were out-played for big stretches of this game by a desperate opponent who came into the game having lost five in a row. But the Flames got strong goaltending and benefited from some timely bounces en route to a 3-1 win to kick off four consecutive games against Vancouver.

The Flames weren’t all that good in the first period. They had trouble breaking out. They had trouble transitioning through the neutral zone. They had trouble executing in the offensive zone. But they got many good saves by Jacob Markstrom to hold them in the game.
Late in the first, the Flames managed to open the scoring. On a late power play, the Flames took over a minute to get puck possession in Vancouver’s zone. But Mark Giordano’s wrister glanced off Jordie Benn’s skate (he was trying to box out Matthew Tkachuk) and it beat Thatcher Demko to make it 1-0 Flames. (The goal was just a second after the Flames power play expired.)
Shots were 14-8 Canucks and scoring chances 7-3 Canucks in the first period.
The Canucks carried play for much of the second period, too, and they tied things up. Elias Pettersson made a dandy move to spring Brock Boeser on a partial breakaway. Markstrom stopped the initial shot, but he and Nikita Nesterov couldn’t locate the loose rebound. Boeser tucked it behind the Flames goaltender to even the score at 1-1.
In the dying seconds of another power play, though, the Flames got another weird one. Andrew Mangiapane’s shot was going wide, but it careened off Jordie Benn’s skate and Nate Schmidt’s glove and past Demko to make it 2-1 Flames. (This goal was also scored right after the power play expired.)
Shots were 10-6 Canucks and scoring chances 5-4 Canucks.
The Canucks continued to press but couldn’t bury anything. After a Sean Monahan penalty expired, he took advantage of a sloppy Vancouver line change and sprang Johnny Gaudreau on a breakaway. Gaudreau beat Demko high to give the Flames a 3-1 lead.
Shots were 12-10 Flames and scoring chances 7-4 Flames in the third period.

So, the Flames were out-shot and largely out-played in every period and every game state for two periods (and a chunk of the third). But they got excellent goaltending and were the beneficiary of a couple good bounces. That’s hockey sometimes.
The Flames got better as the game went along but man, goaltending covered up for a lot of sloppiness in this one.

Markstrom, full stop. Swap him out and it’s a completely different outcome.
Mangiapane was also constantly dangerous in the offensive zone, so he gets an honourable mention.

The Gaudreau breakaway goal is (a) a scoring chance that the Canucks cannot give up down 2-1 in the third period and (b) a goal the Flames really, really needed to pad their lead so they didn’t need to rely on Markstrom making a zillion saves to preserve the victory.

Milan Lucic might get a call from Player Safety after this hit on Justin Bailey. Bailey was hurt, but the play unfolded fairly quickly so there wasn’t a ton of time for him to change course or speed.
This was the first game back in Vancouver for former Canucks Jacob Markstrom, Chris Tanev and Josh Leivo.

The Flames (7-5-1) are back in action on Saturday night in Vancouver against the Canucks! 8 p.m. MT puck drop as the late game in the Hockey Day in Canada triple-header.
Uncategorized
Recent articles from Ryan Pike