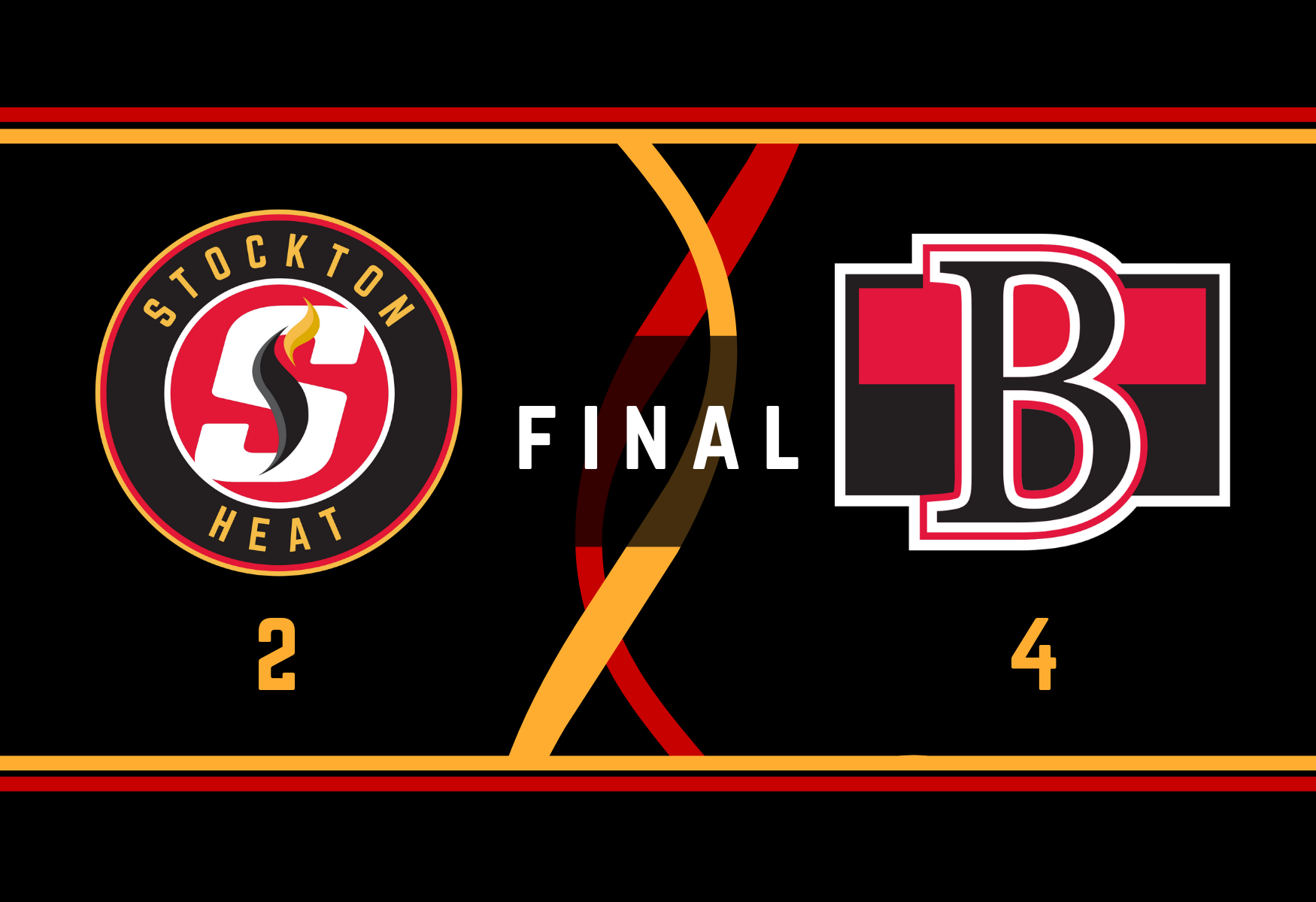 By Mike Gould
1 year ago
The Stockton Heat kept Wednesday’s game close but eventually fell to the Belleville Senators by a 4-2 score.
Stockton and Belleville played to a 2-2 tie through 40 minutes before B-Sens rookie Mark Kastelic potted the go-ahead goal early in the third period.
The Senators would add an empty-net goal late in the third period to seal the win. Stockton fell to 10-12-1 with the loss; Belleville improved to 8-12-1.
Matthew Phillips had a goal and an assist for Stockton in the losing effort. Dmitry Zavgorodniy recorded the primary assist on Phillips’ goal, giving him points in back-to-back games. Garret Sparks faced 31 shots and made 28 saves.
Kastelic, Egor Sokolov, Parker Kelly, and Lassi Thomson all scored for Belleville, with Thomson recording his first AHL goal in his 21st game for Belleville. Filip Gustavsson improved to 4-5-1 on the season with the win, making 30 saves along the way.

The Heat got the party started early in Wednesday’s game. After Sens defenseman Colby Williams took a high-sticking penalty at the 4:18 mark of the first period, Stockton’s first power play unit went to work and quickly capitalized.
Less than a minute into the man-advantage, Heat forward Matthew Phillips sent a cross-ice pass toward defenseman Zac Leslie. The puck bounced around on its way to the intended recipient but Leslie eventually found it and fired it by Filip Gustavsson.
Stockton held onto the 1-0 lead for less than half a period. With Belleville on a power play of its own, defenseman Lassi Thomson picked up the puck at the right point and blistered it past Garret Sparks for his first AHL goal.
Thomson, the Senators’ first round pick in the 2019 NHL Entry Draft, entered Wednesday’s contest with 20 AHL games under his belt and no tallies. The goal briefly went under review for potential goaltender interference but it eventually stood.
Phillips entered Wednesday’s game on a 10-game goalless drought. Moments after Thomson’s goal—and, with Stockton on another power play—Phillips had a glorious chance to snap his skid, darting past three Belleville defenders and quickly throwing the puck towards Gustavsson.
Senators 2020 second round pick Egor Sokolov gave his team a 2-1 lead with 4:43 to play in the opening frame. Sokolov picked up a loose puck along the low left boards, turned, and quickly fired a wrister past Sparks for his team-leading 10th goal of the season.
Phillips finally got on the board in the dying minutes of the first period. After Dmitry Zavgorodniy stole the puck away from Cole Cassels inside Belleville’s defensive zone, he found Phillips with a quick cross-seam pass.
Despite slightly fanning on the shot, Phillips managed to beat Gustavsson high over his glove to knot the game at two goals apiece.
Neither team managed to score in the second period but they both came close on multiple occasions. Heat grinders Mark Simpson and Alex Gallant both had great chances to re-establish Stockton’s one-goal lead after a risky giveaway by Gustavsson behind the Belleville net.
Zavgorodniy continued to put his drastically-improved all-around game on display in the second period. He routinely took shifts where he would test Gustavsson with his hard, accurate shot before using his hockey IQ to disrupt transition attempts by the Senators.
Check out Zavgorodniy’s good stick to intercept a Belleville outlet pass near the end of this video.
Belleville managed to seize control over the game early in the third period. Senators rookie Mark Kastelic is no stranger to scoring goals in the Scotiabank Saddledome, having spent the last five seasons of his hockey career playing for the Calgary Hitmen.
Kastelic found a rebound and slammed home his third goal of the season with just 4:21 elapsed in the final frame.
The Heat did all they could to push back, recording 14 consecutive shots between the 6:15 and 14:15 marks of the third period. Connor Mackey led the way with three shots during that span.
Unfortunately for the Heat, Gustavsson stood tall and kept their shooters at bay. The Heat pulled Sparks with 2:30 remaining in regulation time; Parker Kelly iced it by scoring an empty-netter with 44 seconds to go.

The Heat got a ton of shots in the third period but they struggled at getting traffic in front of Gustavsson; as a result, he saw most of the pucks directed his way and was able to track them with relative ease.
Ultimately, it all came down to execution. The Senators were able to pounce on a rebound early in the third period but the Heat never managed to finish the job for a third time at the other end. Their best chance came when Phillips set up Luke Philp with a pass right in front of Gustavsson’s cage, but the big Swedish goalie managed to lunge across and deny the opportunity.

Matthew Phillips was great on Wednesday, getting back into the swing of things after a difficult few weeks. He finally managed to score his first goal in 10 games and had his first multi-point effort since Mar. 10.
Phillips’ newfound chemistry with Zavgorodniy looks a bit like the magic he was able to create when playing with Connor Zary earlier in the season. Both players are terrific distributors and have the hockey IQ to make plays few other players could orchestrate.

The Heat will be right back at it against Belleville on Thursday, finishing up the second half of a back-to-back at 5:00 pm MT. You can catch that game on AHL TV; I’ll be posting updates on Twitter at @miketgould.
Uncategorized
Recent articles from Mike Gould